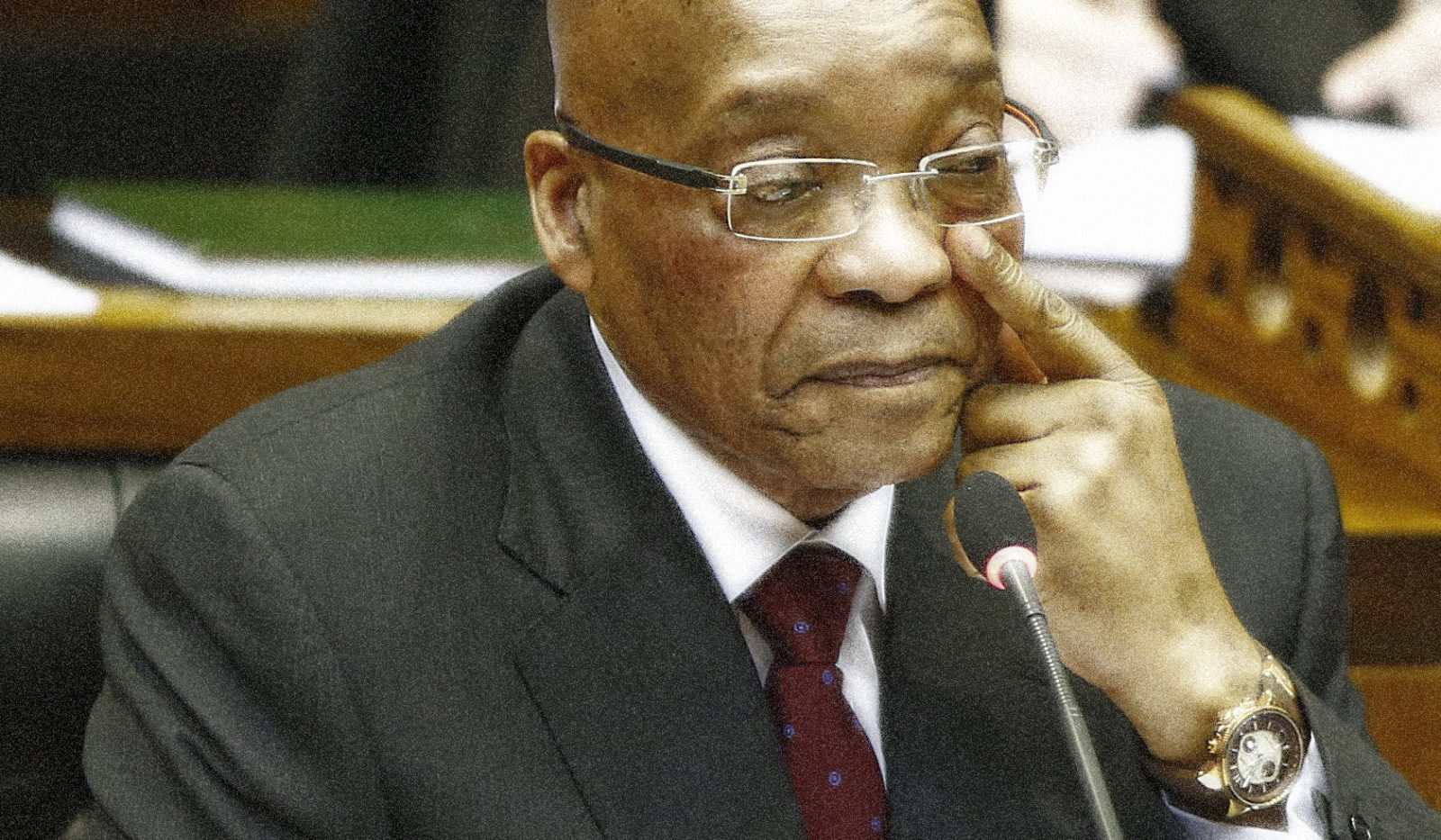 President Jacob Zuma had one last opportunity to put fresh air between himself and the Gupta family before this weekend’s ANC national executive committee (NEC) meeting. Parliament was in fact the ideal place for him to disown the actions of the Guptas and declare that nobody had the right to usurp his powers and abuse his name. By not doing so, Zuma has forced the ANC to confront him on the matter. There is unlikely to be a quick fix but Zuma is depleted of political capital. While some of his allies will try to shield him, others are aiming for the jugular. By RANJENI MUNUSAMY.

“We don’t want a clean cut like with Mbeki,” says one ANC leader. “This man must be held to account for what he did to the ANC.” He explains that former president Thabo Mbeki had the “decency” to exit gracefully when the ANC no longer wanted him as their head of state. “Zuma will cling on by his fingernails because of all these people who stand to lose out if he leaves.”

Another prominent ANC member said he is so emotional and angry by how Zuma has allowed the Guptas to control his presidency that he cannot bear to greet him anymore.

“I hate to admit it but Julius (Malema) is right. He does not deserve the respect due to a president.”

An alliance leader says he has in the past tried to speak to Zuma about the shady dealings of the Guptas and advised him to end his improper relationship with them. “He just laughs and says ‘Don’t worry Baba. It is being handled.’ I don’t know what that means.” Asked what happens now, the alliance leader said “Well he must face what’s coming”.

The question is: WHAT is coming?

In an interview with eNCA on Thursday ANC secretary general Gwede Mantashe was asked whether Zuma could be recalled at this weekend’s NEC meeting. He answered the question technically: No ANC member has asked him to put a recall on the agenda.

Allegations that the Gupta family has improper involvement in state affairs and offered Cabinet positions to several people, including Deputy Finance Minister Mcebisi Jonas, will be discussed. Mantashe’s responses to the raging controversy over the Guptas were insightful about how the ANC would deal with the matter.

“The ANC has a capability and capacity to deal with issues.” He said the NEC need to protect the reputation of the ANC. “We have a responsibility and a duty to ensure that the ANC cannot be dragged down,” Mantashe said in the interview.

Regarding revelations by Jonas, former ANC Member of Parliament Vytjie Mentor and former Public Enterprises Minister Barbara Hogan about improper approaches made to them by the Guptas, Mantashe encouraged more ANC members to come forward. “If people have experiences they must come to the ANC. We’ll listen very carefully. We’ll deal with the broader picture. We are refusing to be narrow in dealing with this matter because it is bigger than this one incident.”

But what will the ANC do with all this information, which it is largely already aware of? Some ANC members suggest that the Office of the Secretary General at Luthuli House should be mandated to investigate the Gupta contagion in the ANC and among their deployees in the state. Others believe that a special tribunal on state capture be set up for ANC members to come forward with information on attempts to corrupt them and whether they had brought this to the attention of the president. This is to counter criticism that people like Jonas chose to make the revelations to the media rather than reporting it to the president.

The South African Communist Party (SACP) has called for an investigation and a judicial commission of inquiry into corporate capture of the state. In a statement revealing that another “Gupta-inspired cabinet shuffle” was imminent, with the Minister of Trade and Industry Rob Davies to be replaced by a newly sworn in ANC MP, the SACP said they would engage with the ANC and the alliance on the “growing evidence of the manipulation of political appointments by the Gupta family”.

On Thursday it emerged that Public Service and Administration Minister Ngoako Ramatlhodi was invited to dinner by the Guptas during his time as Mineral Resources Minister. He declined the invitation. Ramatlhodi was later moved out of the position to make way for Gupta appointee Mosebenzi Zwane, who now facilitates mining deals on their behalf.

With the political fallout intensifying, the Guptas have further enraged the ANC by claiming that the allegations against them were “political point scoring between rival factions within the ANC”. Mantashe said this showed the Guptas disrespect for the ANC. “It is arrogance to the superlative degree of a family that believes that the ANC is nothing to them,” he said. “The ANC must not be blackmailed into inaction by being accused of being in a factional battle. It is not in a factional battle.”

While Mantashe will clearly lead the charge against the Guptas at the NEC, he is unlikely to be as forthright over the president’s surrender of his powers to his friends. It will be up to members of the NEC to express themselves on the matter. While the NEC was previously tipped heavily in Zuma’s favour, his support rests largely with the ANC Youth League, Women’s League and the military veterans association, as well as the premier league faction.

Other NEC members, including Cabinet ministers are being canvassed to speak out against Zuma and the Guptas.

“The important thing is that we do not rush to get results. There cannot be a recall outcome this weekend. Remember how Julius, (Zwelinzima) Vavi and (Willie) Madisha were dealt with. It is a process but in the end he (Zuma) will go,” said one source. “Gwede’s approach is to give you a long rope to hang yourself,” he said.

Another ANC member believes that treasurer general Zweli Mkhize, who is a close ally of Zuma’s, will try to broker a deal in the NEC for a harsh action against the Guptas and no action against the president. As he had done repeatedly on the Nkandla matter, Zuma is washing his hands of culpability and denies knowing what the Guptas were doing.

He said in Parliament on Thursday that the allegations made by Jonas against the Guptas had nothing to do with him. He said he had not offered Jonas the position of minister. “Don’t ask me. Ask the Guptas or Jonas. I have no business with that.”

While allies might buy Zuma some time, a surge of negative sentiment from ANC structures and the public, as well as the pending Constitutional Court ruling on Nkandla, will keep the pressure on him.

Mantashe made the point in the eNCA interview that it was a lot more complicated for the ANC to deal with Zuma than was the case with Mbeki. He said when the NEC recalled Mbeki he was no longer a serving leader in the party.

It will be extremely difficult for the ANC to act against its senior most leader, particularly in an election year. There are some fears that the opposition would exploit this, pointing out the ANC’s leadership weaknesses. However, there are also concerns about how much damage Zuma is doing to the ANC and the impact on the party’s electoral base.

Zuma has survived numerous scandals by getting others to take the fall for him or denying responsibility for wrongdoing. From his responses and demeanour in Parliament on Thursday, he clearly wants to adopt the same approach now. But Zuma has lost political capital and credibility and is also clearly vested in the Gupta business empire.

His refusal to acknowledge that his friends have compromised him and the integrity of the state is due to the fact that he and his son benefit from their relationship with the Guptas and need for it to continue.

The ANC is now faced with one of the biggest decisions in its 104-year history. It can continue to put up with the Zuma-Gupta contagion or it can purge itself of the poison. Either way the ANC will bleed. But the ANC’s electoral dominance and future is dependent on whether it can rescue itself from the menace within. DM