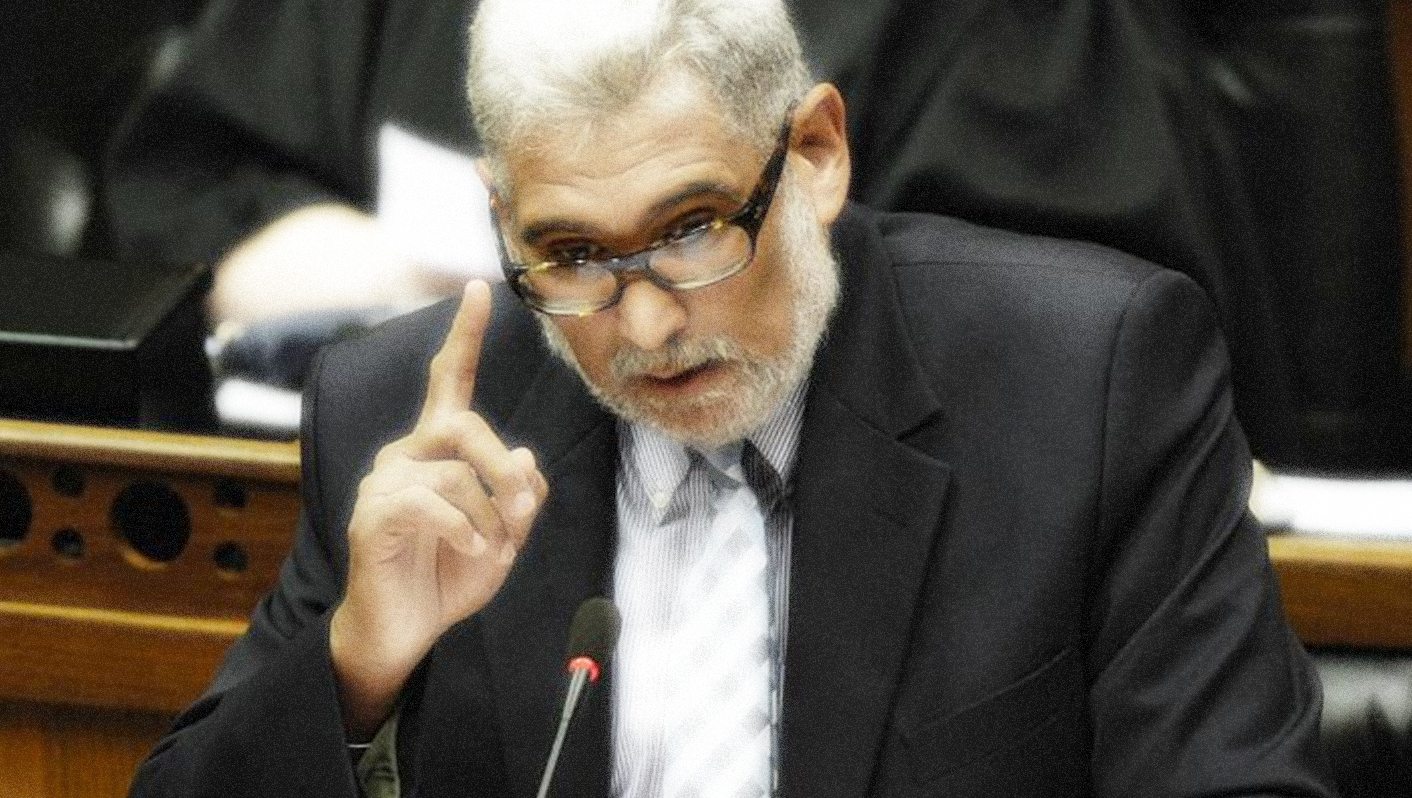 It was not going to be, given the resistance from the opposition benches to ex-ANC MP and security hawk Cecil Burgess as Inspector-General of Intelligence. But until the 11th hour on Wednesday the ANC pushed to secure the additional 18 votes it needed for the required two-thirds majority in the 400-strong National Assembly. But instead of a vote, the matter was returned to the joint standing committee on intelligence. The political push to use parliamentary processes to deploy a specific person meant that for a year Parliament failed to fill the post. And it is not the only position requiring the legislature’s involvement left vacant for long periods. By MARIANNE MERTEN.

The ANC in Parliament is used to getting its way on the back of its numbers with 249 seats in the National Assembly. Usually that’s enough. But the intelligence inspector-general’s appointment requires, under Section 210(b) of the Constitution, at least a two-thirds majority, or 267 votes. Twice last year, in June and November, Burgess’s recommendation for the post was on the order paper after the ANC used its numbers on the joint standing committee on intelligence (JSCI) to endorse him. On both occasions the matter was withdrawn as the ANC could not count on a secure two-thirds majority.

So lobbying of opposition parties happened behind the scenes. Ahead of Wednesday’s scheduled vote, the ANC in Parliament was also pushing to ensure every one of its MPs would be in the House. On Monday Speaker Baleka Mbete appealed to MPs across the party political spectrum.

“As part of its oversight responsibilities, Parliament has a constitutional duty to ensure that an inspector-general of intelligence is appointed. I appeal to all members to ensure, in the interest of the country, that this process is finalised,” Mbete said in a letter to all MPs.

But opposition parties dislike Burgess for several reasons, following his stint as JSCI chairperson and of the ad hoc committee, which processed the Protection of State Information Bill, aka the Secrecy Bill. Burgess, who for many years was closely associated with the Pan-Africanist Congress (PAC), became an MP for the Independent Democrats founded by former PAC MP Patricia de Lille, but in 2005 he joined to the ANC.

Under his watch, the JSCI failed to publish its annual reports by the legally stipulated deadline of the end of May at the latest. Published in the Announcements, Tablings and Committee Reports – the record of parliamentary work – these are a rare glimpse into the intelligence services as the committee always sits behind closed doors. In November 2013 the JSCI annual report focused on the Nkandla debacle, blaming contractors for the gross cost escalations of the security upgrades at the presidential rural homestead. Justifying the security upgrades, the JSCI report also cited the Nkandla area’s “strong earthquakes… an average one earthquake every 50 years, with occurrences at five to six Richter scale [sic]”, political volatility and high crime rate.

Unlike the JSCI 2009 interviews for the previous intelligence inspector-general, Faith Radebe, who left the office at the end of March 2015 when her term expired (she was not asked to stay on until her successor was in place), the committee sat behind closed doors for this round of interviews. Only the short-listing of candidates for interviews was in open committee.

Now with the matter referred back to the JSCI – it took less than a minute – the ANC in Parliament put a positive spin on effectively having been forced to back down.

“We are confident that the consensus that will be sought by the committee process will expedite the appointment of the new inspector general (for intelligence),” it said in a statement.

As the ANC earlier this week indicated its confidence the vote would be carried, a quick whip-around showed that those opposed to Burgess included the DA, Economic Freedom Fighters (EFF), IFP, Freedom Front Plus, Cope and African Christian Democratic Party (ACDP). It is understood that up for grabs may have been up to four votes from the United Democratic Movement, alongside one from the PAC MP and Themba Godi, the former PAC member founded the African Peoples’ Congress. The position of the six National Freedom Party MPs and the two AgangSA MPs could not be ascertained. But the numbers show the ANC could only count on a maximum of 14 additional votes, short of what was required.

Lobby group the Right2Kown Campaign last year cautioned that the office of the inspector-general of intelligence was not working effectively. A number of complaints were not taken on as there appeared to be a reluctance to do so in the absence of an inspector-general, the campaign said. On Wednesday R2K said: “We urge Parliament to swiftly appoint a suitable candidate that will fill the surveillance watchdog role that has been vacant for a year now. The country cannot afford not to have an intelligence structure’s oversight”.

However, the National Assembly on Wednesday successfully – and unanimously – recommended Janet Love to fill the last remaining vacancy on the Electoral Commission of South Africa (IEC). The name of the South African Human Rights Commission commissioner, MP and former anti-apartheid activist, who was active in the underground, will now be sent to President Jacob Zuma for appointment.

Love’s recommendation comes almost a year after the vacancy arose when Raenette Taljaard resigned, and five months before the 2016 local government election must be held. The last possible date is 16 August.

In August 2015 the parliamentary home affairs committee declined to fill that vacancy from the eight names interviewed by a panel under Chief Justice Mogoeng Mogoeng due to concerns about the constitutionally-required race and gender representivity. Currently all IEC commissioners are black men. “The committee recommends that the president considers the re-initiation of the process of advertising and interviews to identify more candidates meeting the equity requirements,” it said.

In March 2015 Love had lost out to Vuma Mashinini, a former special presidential adviser, who was recommended to fill the vacancy triggered by the resignation of IEC chairwomanPansy Tlakula. She quit following findings of mismanagement and conflicts of interest by the public protector and an independent forensic audit in relation to the commission’s new head office. The president appointed Mashinini to the IEC after the National Assembly recommended him in a vote of 223 for, 127 against and two abstentions and, subsequently in October, as the new IEC chairman.

With the last Electoral Commission vacancy now dealt with, and several of the vacancies in the Independent Communications Authority of South Africa (Icasa) also filled by Parliament this week, the national legislature must tackle the six vacancies on the 12-strong SABC board.

Unless these vacancies are filled, opposition parties have argued the SABC board is improperly constituted, and its decisions are up for challenge.

But the process has been mired in controversy for well over a year. Central are the removal of Hope Zinde, Rachel Kalidass and Ronnie Lubisi with approval by Communications Minister Faith Muthambi. Three other vacancies arose through the unexpected resignation of Bongani Khumalo in January 2015, shortly after Thembinkosi Bonakele’s resignation in mid-2014 was officially put before the parliamentary communications committee. Another vacancy arose in December 2014 with the resignation of SABC board chairwoman Zandile Tshabalala following the committee’s recommendation to Zuma that she be fired for misrepresenting qualifications.

While last year the parliamentary communications committee initially accepted a legal opinion that the removals of Zinde, Kalidass and Lubisi in terms of the Companies Act were invalid, the MPs reversed its decision while their chairwoman Joyce Moloi-Moropa was on sick leave mid-year. Towards late 2015, three SABC board posts were advertised: it is understood these relate to the departures of Tshabalala, Khumalo and Bonakele. Last month the committee shortlisted nine names from the 58 applications; interviews have yet to be scheduled.

Meanwhile, Muthambi tabled an amendment draft law which effectively prevents MPs from having a say in the appointment process.

The communications committee is also without a permanent chairperson. Moloi-Moropa has resigned to permanently focus on her other job as South African Communist Party (SACP) national treasurer. While personal circumstances have been cited in the resignation, it is an open secret in the parliamentary corridors that political manoeuvring over the SABC has led to a fallout, which saw Moloi-Moropa isolated in trying to pursue parliamentary oversight.

The scene is set for a prickly process in the communications committee. And the drive to finally find a new intelligence inspector-general is unlikely to be plain sailing.

What happened in the House on Wednesday was a stark reminder that numbers do not always carry the day, even in the majoritarian version of democracy the ANC espouses. But for Parliament the debacle goes deeper: how the mix of political desires, deployment considerations, parliamentary procedure and constitutional duty played out is nothing short of deeply worrying. DM

Photo of Cecil Burgess by CityPress.