SARS Wars: Crimes Against the State’s hounding of Gordhan clearly a malicious prosecution 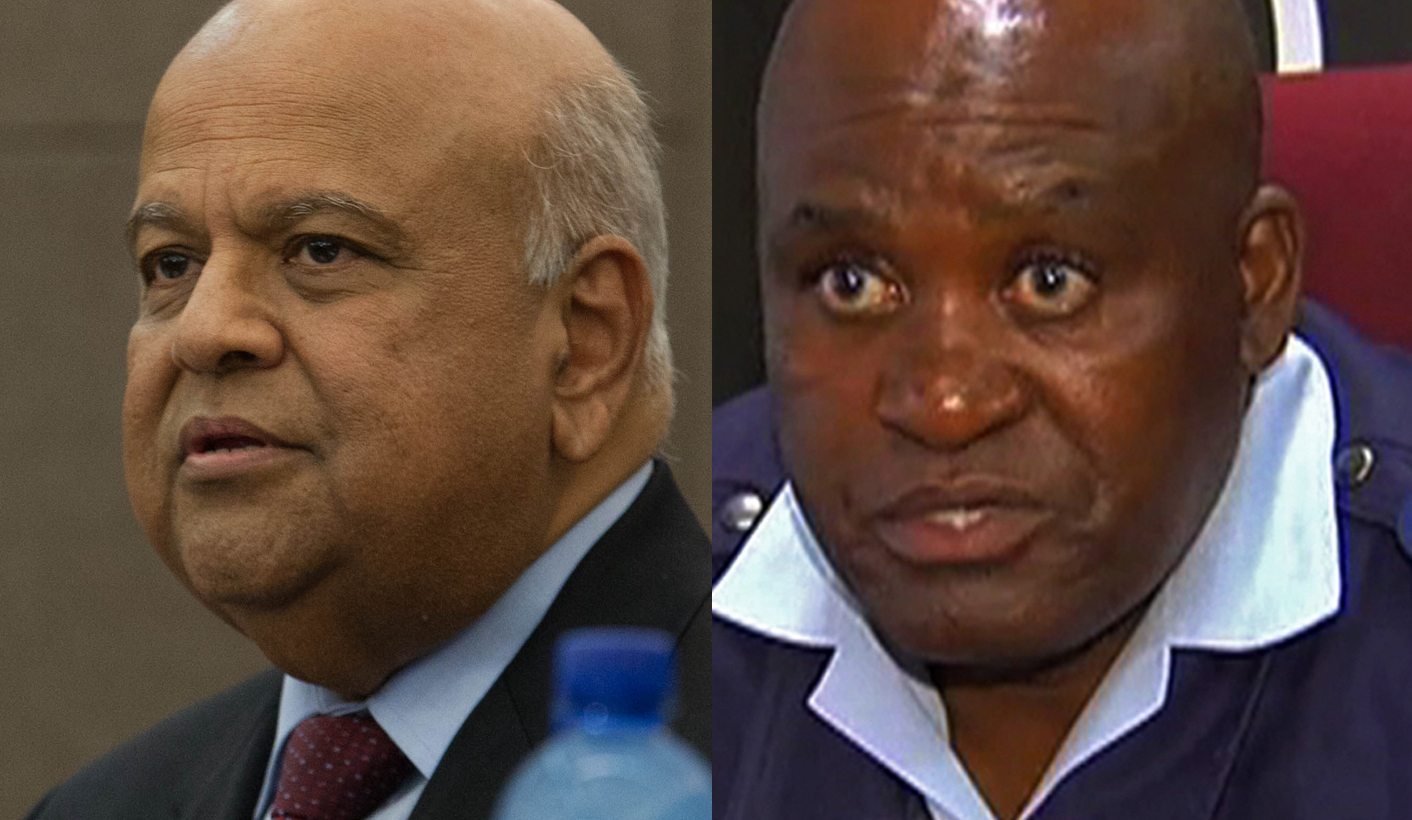 Why is the Crimes Against the State Unit (CATS), which former IPID head Robert McBride has labelled the “Gestapo wing” of the Hawks, leading the investigation into Pravin Gordhan and the alleged SARS “rogue” unit when an official paper trail leading all the way back to former Finance Minister Trevor Manuel (who appointed Gordhan), former President Thabo Mbeki as well as several NIA and SSA officials shows the special investigative unit was legally constituted and officially sanctioned? It can only be viewed as a malicious prosecution. By MARIANNE THAMM.

While some among us might suffer from amnesia, the fact is that way back in 1999, then Finance Minister Trevor Manuel appointed Pravin Gordhan as the first Commissioner of SARS. The SARS Act of 1997 gave him that power but in 2002 it was amended to allow the president to appoint the commissioner.

So, the logic then is, if Gordhan was appointed by Manuel, a move approved by then President Thabo Mbeki, and NIA and SSA officials were involved at various stages and were aware of the establishment of a special investigative unit within SARS, why are the CATS gunning for our accidental Finance Minister Gordhan, who back then was a much smaller cog in the wheel?

The Hawks have not approached, as far as we know, Mbeki, Manuel or former Minister of Intelligence Ronnie Kasrils, all of whom were deeply involved in setting up of the unit.

There is a vast trove of official documents which, should the CATS take the trouble to peruse or study them, will answer more than the 27 questions they have directed at Gordhan and which they have been pressuring him to answer, even threatening legal action. Targeting Gordhan, who was returned to political power when President Zuma was forced to reinstate him after a disastrous own goal in firing Nhlanhla Nene in December, can only be viewed then, in this light, as a political hit.

Gordhan is clearly viewed now as an obstacle not only to current Commissioner Tom Moyane, who was appointed by President Zuma, but to those who might benefit from a close relationship with No 1.

In the critical saga of “state capture” now playing out in South Africa, the stand-off between Moyane and Gordhan is but one chapter of the sordid and scandal-ridden presidency of Jacob Zuma. Other players include the Hawks and the NPA who appear to be more concerned with those who are perceived to be “enemies” of a particular ANC faction vying for dominance, than those who really are corrupt or threaten the stability and integrity of the democratic state.

In February 2007, President Thabo Mbeki, in his State of the Nation Address (SONA), announced that the government would “start the process of further modernising the systems of the South African Revenue Service, especially in respect of border control, and improve the work of inter-departmental co-ordinating structures in this regard, intensify intelligence work with regard to organised crime, building on the successes that have been achieved in the last few months in dealing with cash-in-transit heists, drug trafficking and the poaching of game and abalone”.

In February that year Manuel signed off and approved a request by SARS to fund “a special capability within the NIA to supply SARS and law enforcement with the necessary information to address the illicit economy”. (See bellow)

The document, under the heading “Discussion” reads, “Collecting tactical intelligence invariably means penetrating and intercepting organised crime syndicates. This is an activity for which SARS does not presently have the capacity (including the legislative mandate to manage clandestine activity). Discussions are taking place with National Intelligence to supplement intelligence capacity. NIA is willing to create ring-fenced capability, provided funds are made available to cover personnel costs. All other costs will be covered by NIA. NIA is willing to formalise the above-mentioned arrangement into a MOU”.

Under Gordhan’s watch SARS was turned into a frighteningly efficient machine, in fact one of the most capable government departments collecting record tax revenues anywhere in the world. The unit, too, began to garner spectacular successes with regard to several high-profile tax evaders.

It is curious too that the CATS seem to be steering clear of former SARS Commissioner Oupa Magashula (2009 – 2013) who presided when the unit existed, approved posts and sat in on a meeting with the SSA in 2010 and who wrote several letters to the SSA and SAPS seeking finality on the unit. (See Bellow)

The meeting between SARS and the SSA was called after an “intelligence dossier” by former disgruntled SARS official Michael Peega, who was arrested for Rhino poaching while he was on leave, leaked it to the media as well as handing a copy to Julius Malema.

Neither the SAPS or the SSA expressed any doubts or apprehensions about the unit when Magashula or his successor, Deputy Commissioner Ivan Pillay, wrote to them in 2010, 2011, 2012, 2013 and 2014. Pillay has set out in detail these points in his submission to the Sikhakhane Commission.

Setting out the sequence of events that have led us to where we are today, former SARS spokesman Adrian Lackay, in a 2015 submission to Yunus Carrim, chair of the Standing Committee on Intelligence explained that Peega and others “functioned in tandem with Ms Walter [BAT spy who had a relationship with SARS group executive Johann van Loggerenberg] and the second set of protagonists with the sole purpose of ridding SARS of persons they were opposed to. I believe that their efforts had been unsuccessful for some years, and finally came to fruition when the circumstances presented themselves for the proverbial ‘perfect storm’”.

Lackay said that within a few days after the initial complaint “a fourth set of protagonists capitalised on the situation. I believe that these persons hail from within the institution and have had axes to grind with mainly Mr Ivan Pillay, Mr Pete Richer and Mr Johann van Loggerenberg and others affected for a variety of reasons. I believe that it very quickly became a case of ‘my enemy’s enemy is my friend’ and in a rather short space of time, people who would never have associated themselves with each other from any perspective, began to advance each other’s agendas.

As a by-product of the sequence of events, said Lackay, “multiple agendas, being advanced by multiple groupings in different ways, sometimes in tandem or concert, sometimes not, sometimes individually so and sometimes in collusion. The lack of reaching a conclusion on the true facts has harmed and continues to harm SARS as an institution, its public credibility and ultimately the fiscal prospects of the country.”

The Hawks and the Crimes Against the State Unit have become a blunt instrument doing the political bidding of unseen masters and appear to have been deployed against a range of people who are viewed as a threat including Pravin Gordhan, former NPA prosecutor Glynnis Breytenbach, former KZN Hawks boss Johan Booysen (both of whom were cleared of charges in disciplinary hearings), Anwa Dramat and Robert McBride.

The Crimes Against the State Unit is the Hawks on steroids. The mandate of the CATS, led by Brigadier Nyameka Xaba, is to investigate potential terrorist threats to the country and not Cabinet ministers. And the Ministers of Police and State Security, Nathi Nhleko and David Mahlobo, too should not be involving themselves in the business of the Hawks. The lines are not only blurred they are now nonexistent. The securocrats are trying to run the show.

So why is everyone gunning for Gordhan, even through such an obviously false set of accusations?

Because he has refused, unlike so many others, to do the bidding of those who, he has said, do not have the interest of the country or its citizens at heart.

Like his Deputy Minister Mcebisi Jonas, Gordhan too is “committed to good governance, abiding by the constitution of our country and being accountable to our people who repeatedly express their confidence and trust in us, election after election”.

That is his crime.

The Revolution is eating its own in full view of the South African public and international community. And with the political pendulum now swinging away from President Zuma, those who have shielded him and those who might be doing his bidding, the SARS saga too still needs to play itself out. But who will end up eating whom? DM