The athlete’s dilemma: The pressures and pleasures of doping 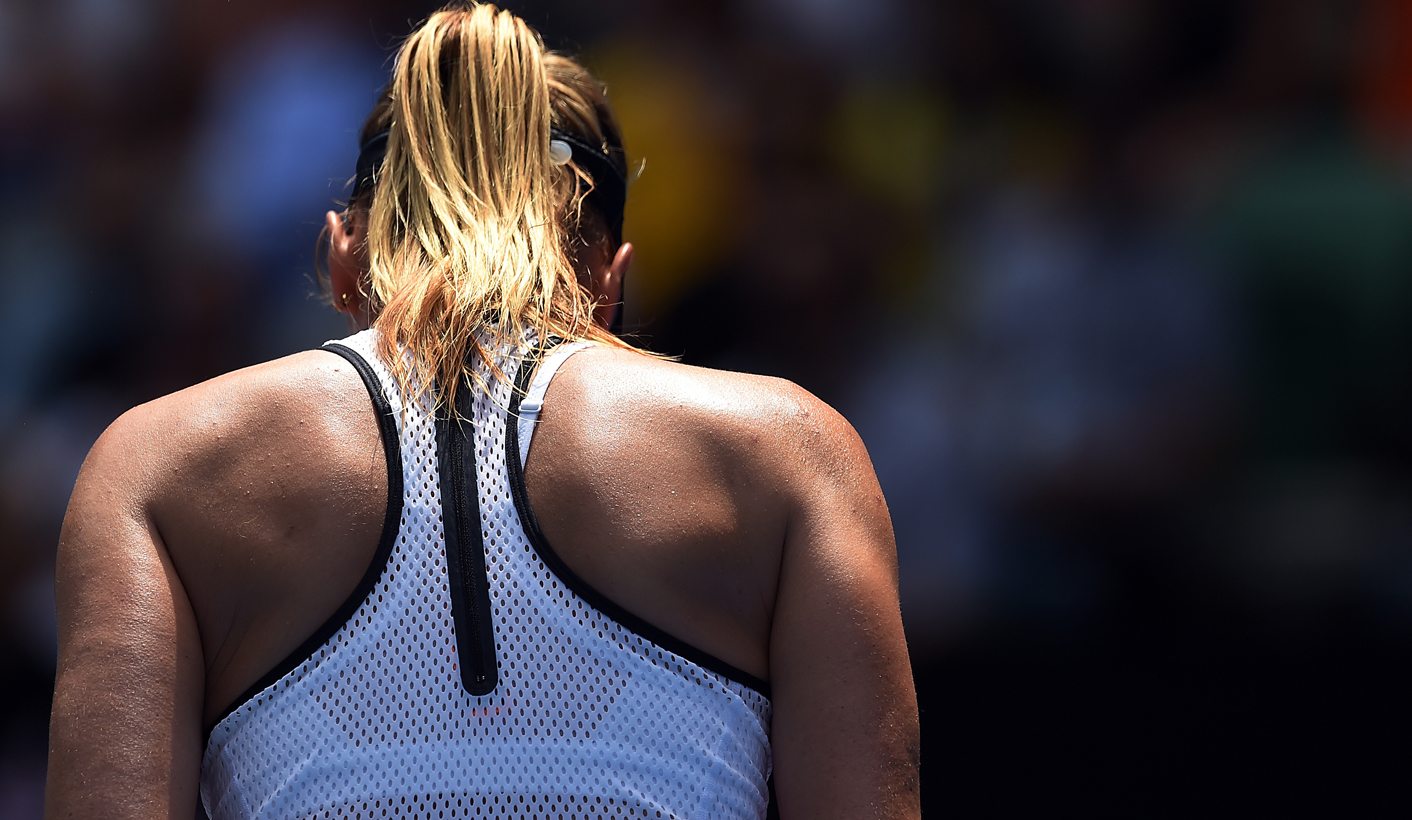 When asked in the 1980s whether they would take a drug that guaranteed them a gold medal but would kill them within five years, many said they would take the drugs. As the Maria Sharapova case continues to unravel, international sport is asking itself just how deep the rabbit hole goes, and how far athletes are willing to push the envelope. It seems doping will always be one step ahead of testing and sanctions. By ANTOINETTE MULLER.

Over the last week or so, Maria Sharapova has become an unwitting poster child for doping in tennis. While at first she had managed to evoke sympathy from passive fans, the questions raised around the incident just kept on coming. Why was a healthy, fit, 28-year-old using heart medication made for severely ill elderly people? And why was that same fit athlete using the drug for nearly 10 years, far longer than the recommended six-week treatment dosage? Why, despite being warned, did no one take note of the drug being on the prohibited substance list?

The avalanche of questions was followed by an echo of answers from medical experts: there is no reason why a healthy athlete should be taking meldonium. And Sharapova was not alone. The list of athletes who have tested positive for the banned substance has ballooned and at last count there have been 99 positive tests for the drug this year. Of those, 16 have been confirmed — seven of them from Russia. That the drug originated in Latvia probably plays some role in its prominence in Eastern Europe, but considering all the accusations around so-called “state sponsored doping” in Russia, it’s not too difficult to be suspicious that there might be something a bit more cynical going on.

Not all positive drug tests mean the athlete has purposefully taken drugs to enhance their performance, but as testing slowly starts to get better, it becomes increasingly clear that the battle anti-doping agencies are fighting is massive.

Dr Jon Patricios, a sports physician at the Centre for Sports Medicine and Orthopaedics who also serves on tribunals for the South African Institute for Drug Free Sport (Saids), believes sport’s doping problem is far bigger and far more difficult to keep up with than we ever thought.

“It’s bigger than we think. What’s interesting about the Sharapova case is that it’s exposed an undercurrent of borderline doping. What I mean by that is that she was using an agent that was perfectly legal for a number of years, but she should never have been taking,” he told Daily Maverick.

“It would seem that there is some sort of industry that is quite invested in finding out what sort of agents are out there that might be performance enhancing. And I think there is a particular industry in Russia that’s experimenting with these things.”

While that might sound like something out of a conspiracy movie, it’s not too difficult to believe. For many athletes, especially those on Olympic programmes, the goal is to win at all costs — and if it can be done by sneaking a perfectly legal substance under the radar, why not? After all, taking a completely legal substance that still enhances performance might not even be considered cheating by some athletes.

“For some athletes doping is easy to rationalise. It simply amounts to levelling the playing field because they might have been groomed form a young age to believe that everyone is at it or that they should do whatever it takes to win,” explains Greg Wilmot, a counselling and sport psychologist at the Health & Sport Centre.

This is backed up by research which relates to the “prisoners’ dilemma”. Research done by Dr Kjetil K Haugen for the Molde University College in Norway theorises that the action of one individual has consequences for another. In the context of sport and doping it reasons that using drugs might happen due to the suspicion or conviction of other athletes, thus one must use drugs to be able to compete at the same level.

But the feel that comes from winning is also a factor, says Wilmot. He says that from a young age praise is reinforced for “being the best” in our everyday lives and even in advertising. This could mean doping, both through legal and illegally methods, might simply be part of a strategy.

“Doping is seen by some athletes as an optimal strategy or as a risk or reward strategy. If the process of testing is poor and athletes know what the parameters are and what the half-life of the drug is and there is such a huge value placed on winning, why wouldn’t they do it?” Wilmot adds.

“The perception of what winning means and what winning feels like is also a strong draw card for those who resort to doping.”

The psychological pull factor to win at all costs and constantly find ways to get around the system makes it incredibly difficult for anti-doping testing to keep their finger on the pulse. Medicine is constantly evolving and variants of drugs already on the banned list do crop up from time to time. These drugs are not always detectable in drug tests immediately, though, and staying up to date with such trends is something that takes a lot of resources, something which, on WADA’s budget, is a challenge, but it is the “grey area drugs” (legal, but performance enhancing) causing the most headaches for anti-doping advocates.

“People are not simply going to volunteer information about drugs that are legal and enhance performances to WADA,” says Dr Patricios.

For drugs like meldonium even to be considered for the banned list takes years. First, a trend needs to be spotted, then studies need to be done to determine whether or not the drug is indeed performance enhancing by doing trials. From there, it is placed on the monitoring list to determine how many athletes are using it. Only then it is banned. Once on the banned list, testing needs to be thorough and Dr Patricios does not believe that process is adequate. But more worrying is the prevalence of doping at levels where there isn’t testing.

“What’s worrying for me as a doctor is the amateur side of sport where there is little to no testing taking place. In club sport and school sport that’s an area that’s evolving quite quickly and something that we need to be aware of. And it’s not just an issue with kids who want to make the first rugby team, there are also users who just want to look good in the gym and on the beach,” says Patricious.

This then draws back to normalising “cheating” from a psychological point of view. Add to that the pressures to perform at top-level sports and we have created a volatile environment which means that someone, somewhere will always see the reward as outweighing the risk.

One theory that shows just how deep-rooted the problem is, is the Goldman Dilemma. Researcher Bob Goldman began asking elite athletes in the 1980s whether they would take a drug that guaranteed them a gold medal but would also kill them within five years. Half of the respondents said that they would take the drugs.

Goldman also asked 195 US Olympic athletes in 1995 if they would take a drug if they would not be caught and be guaranteed a win. Alarmingly, 98% said they would.

While there currently is no known drug that absolutely guarantees a win if it is taken, there are plenty of substances that guarantee a performance-enhancing boost, however marginal. When these victories directly result in better prize money and, most likely, high-paying endorsements, any marginal gain that might better someone’s chances of winning is always going to be appealing.

But will there ever be a deterrent that’s strong enough? The risk of a two-year ban seems to be one that many athletes are willing to take, even if that lumps them with the label of being a “cheat” for the rest of their careers. Both Patricios and Wilmot think sanctions need to be far tougher on those found guilty of cheating.

“I think the testing is not as thorough as it could be and that perhaps the sanctions aren’t long enough. Perhaps we have reached a stage where we should look at criminalising the process and then it will be a real deterrent,” Patricios says.

“I think those who dope should be severely sanctioned and never be allowed near the sport in any way ever again, but I also think no matter what we do, people are always going to take that risk,” Wilmot adds. DM