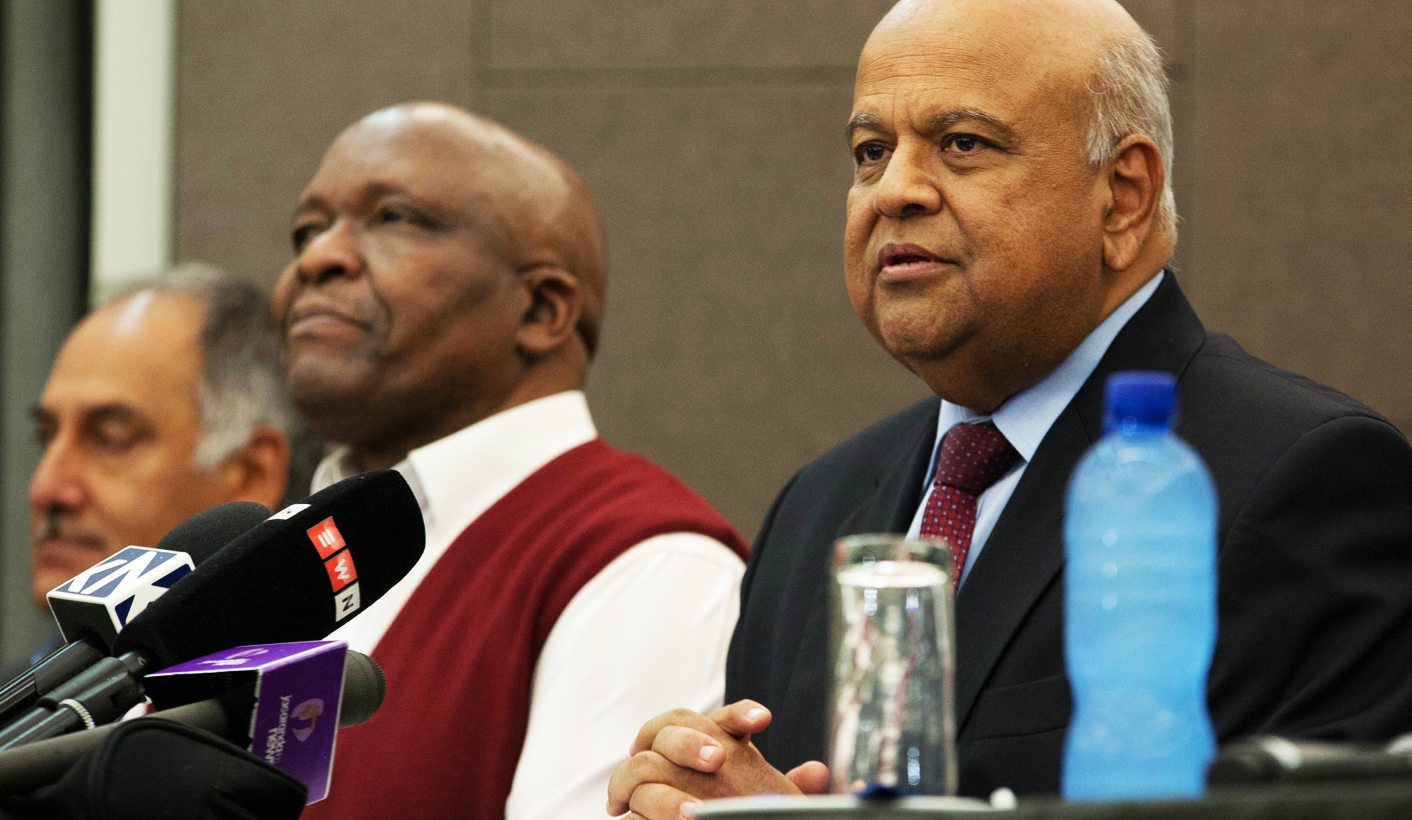 In another country, as allegations of state capture and corruption by one influential family continue to mount, it would seem apt that its Directorate for Priority Crime Investigation (DPCI) moved swiftly to investigate such serious claims and direct threats to a sovereign democratic state. In South Africa however, the Hawks, as the DPCI is known, have decided that Finance Minister Pravin Gordhan is a more worthy public target. It appears that we have lost all pretence and fallen down the rabbit hole. By MARIANNE THAMM.

With a gruelling overseas investor roadshow under his belt and now facing meetings in South Africa with international rating agencies, Minister of Finance Pravin Gordhan is a man fighting for the country’s desperate, flagging economy and trying to prevent a downgrade to junk status.

This is a critical moment and you would think the country, and the ruling party in particular, would be invested in the process and rally behind him.

Instead, as Gordhan stares down investors, he has been forced to fight for political survival as the country’s “elite” Directorate for Priority Crime Investigation, The Hawks – aided and abetted by the Ministers of Police and State Security – behaves like a pack of bullies publicly threatening him.

In a media statement on Tuesday Hawks spokesperson Brigadier Hangwani Mulaudzi informed Gordhan that “our legal team are forging a way forward which will see the Hawks exercising our constitutional powers… The investigations will not be stalled by an individual who refuses to comply with the authorities and demand a [sic] preferential treatment”.

The Hawks missive, which brimmed with barely disguised hostility and malice, said the DCPI “has noted with concerns the utterances by the Minister of Finance Mr Pravin Gordhan that he was not aware of the letter sent to him, detailing the 14th March 2016 at 16:00 as his deadline for answering questions sent to him”.

The public brawl continued this week after the Sunday Independent led with a story headlined “Hawks Warn Gordhan” and which suggested that Hawks Head, Lieutenant General Mthandazo Ntlemeza, had sent a second letter (which appeared to have been leaked directly to the publication) to the Minister of Finance “giving Gordhan an ultimatum to answer his 27 questions by tomorrow or face the consequences”.

The 27 questions relate to a complaint lodged with the Hawks in March 2015 by current SARS Commissioner Tom Moyane and in relation to an alleged “rogue unit” that operated at the revenue collection service while Gordhan was commissioner. Moyane has refused a request by Gordhan, after his re-appointment in December, to halt his current restructuring of SARS.

Responding to the Hawks statement Minister Gordhan’s office said on Tuesday that the Sunday Independent story had created an impression that the Hawks had sent the Minister of Finance a “new letter” over the weekend and this was not responded to.

Gordhan’s office added that “those who leaked the letter deliberately sought to mislead and malign the person of the minister. Notwithstanding that the Hawks have not responded to minister’s lawyers’ representations for further clarity, the minister has nonetheless instructed his legal team to prepare an adequate response.”

His office added that Gordhan would have preferred to abide by a request by the Presidency and the ANC (as an NEC member) not to debate this mater in public “however, once again the Hawks triggered a response because of their threatening statement. Ideally, the minister will not be commenting any further. His focus remains on the vital work of the National Treasury.”

Earlier Mulaudzi had maintained that “the Hawks do not engage people on public space [sic] but the Minister has left us no choice but to clear the air, set the record straight and restore public’s trust on us as an elite crime fighting unit.”

There is a major revealing Freudian slip in Mulaudzi’s statement which reads, “as for the minister suggesting that the Hawks had leaked the letters and should call a press conference and talk about the matter at hand, we would like to set the record straight as well, that had the minister, like any law-abiding citizen, complied with our letter and provided answers, we would not be where we are today.”

And because he did not comply, the letters were strategically leaked to the media?

This certainly seems to be the only inference that can be made from the clumsy Hawks statement.

It goes on, however, reaching a dramatic swagger with “this is neither a talk show nor a soapie. We are mandated to investigate without fear, favour or prejudice and there is nowhere in the Constitution wherein calling a press conference has been mentioned as another means of conducting investigations”.

Meanwhile the Hawks’ tunnel vision seems to have disabled the unit’s ability to look up from the cross-hairs aimed at Gordhan’s back and investigate troubling and mounting allegations that the Gupta family have improperly involved themselves with matters of state offering ministerial positions to ANC politicians in return for favours and preferential treatment.

On Monday Vytjie Mentor, former ANC MP and chairwoman of the portfolio committee on public works, made public that the Gupta family had asked her whether she had wanted to be Minister of Public Enterprises in 2010 after Barbara Hogan had been fired by President Zuma. Mentor said the Guptas had said the job was hers if she was prepared to hand SAA’s flight route to India to the family. She added that President Zuma was at the Gupta’s Saxonwold complex when the offer was made, but in another room.

Meanwhile, President Zuma’s office has claimed that he has “no recollection of Ms Mentor. He is therefore unable to comment on any alleged incident in her career”.

The Gupta family has also denied meeting Mentor and challenged her to file an affidavit that she was offered the ministerial position. Previously the family denied reports that Minister of Mineral Resources, Mosebenzi Zwane, had travelled to Switzerland with a delegation from the Gupta-owned Tegeta Resources to negotiate the purchase of a coal mine. However, later Zwane’s spokesperson confirmed that the minister had indeed travelled with the family.

Deputy Minister of Finance Mcebisi Jonas has remained quiet after reports that the Gupta family had offered him the Treasury top spot shortly before President Zuma fired Nhlanhla Nene in December.

While all of these allegations stand to be challenged and tested in a court of law, the problem is no one is investigating them. Should the matter ever get to court those ANC members who might have been allegedly induced might find themselves having to explain why they did not report the matter as required by the Prevention of Corruption Act.

The Hawks, under the South African Police Service Act, has a direct mandate to investigate corruption and while Gordhan has undertaken to comply – when he has time – with the Hawks’ 27 questions, it appears that, for now, the allegations against the Gupta family are simply being ignored.

While Mentor may be the first to stick her head out over the parapet – and she may pay dearly for daring to do so – she has created a space for other ANC members who might have been approached to come forward.

It was Hogan who was the first to speak out in December after President Zuma fired Nene, saying that it was the final straw.

“If the president is now intent on dismantling Treasury anyone who has been in government knows that a lot of government revolves around a treasury. The president had gone beyond what was acceptable.”

Have the Gupta family gone beyond what is acceptable? There is only one way to find out and clear the air – investigate their business links and the charges that they are in essence calling the shots in South Africa. DM