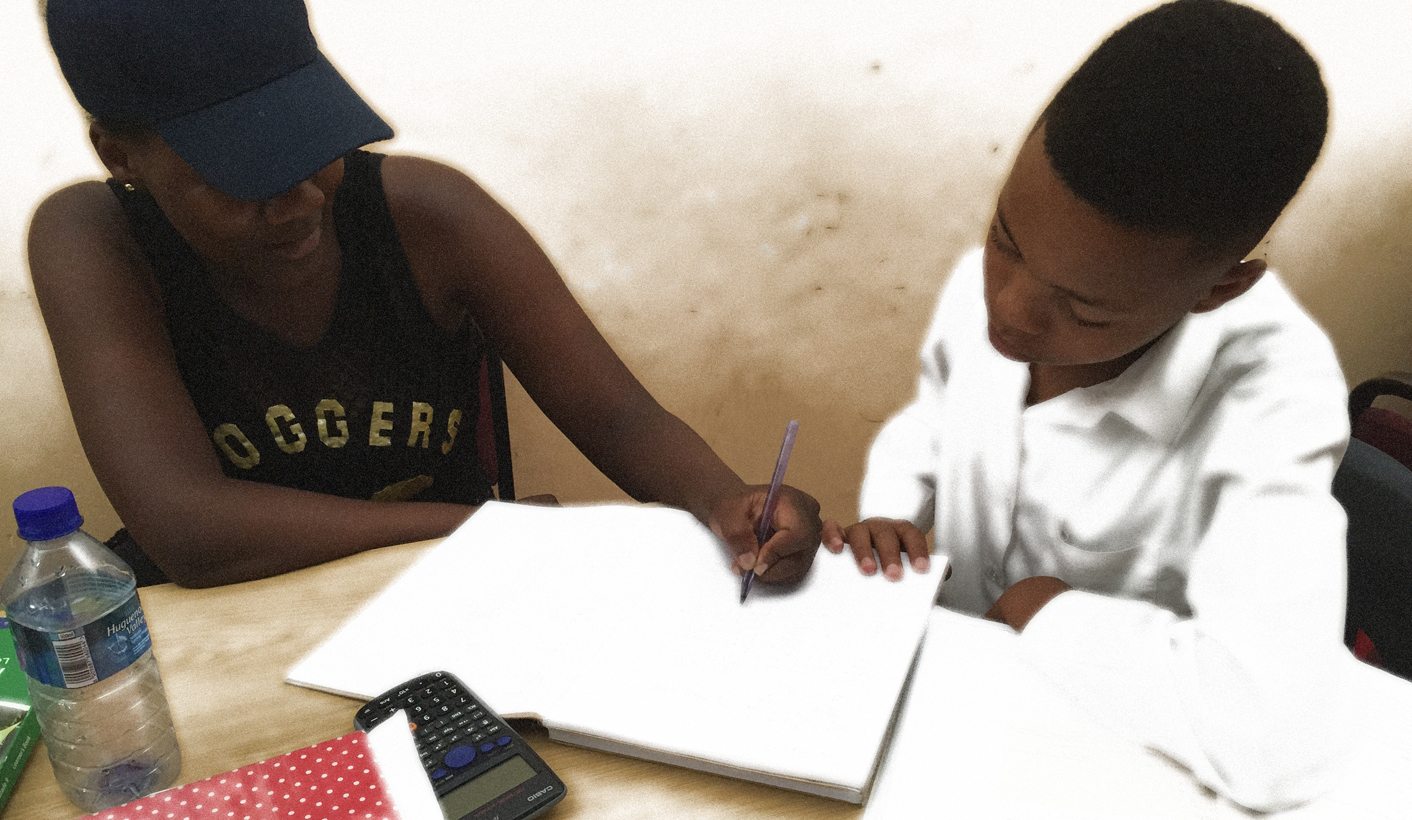 The young adults who run IkamvaYouth don't pretend to teach school pupils. They just do “what educated parents do”: homework help, a safe place to go after school, and a little bit of individual attention. These are small things with enormous impact on matric pass rates and future incomes. By PIPPA GREEN.

The Nazeema Isaacs library, on the eastern side of Khayelitsha, buzzes in the afternoons. It is then that pupils from four high schools in Makhaza – Chris Hani, Harry Gwala, Sizimisele and Sinako – arrive for two-hour tutoring sessions to help them through their homework. They sit in groups of four or five, each with a tutor in attendance.

Today, a Monday, the grade nines are doing maths. “Don’t panic when you see something like this,” says the tutor, Nelisa Qongwane. She points to a complicated equation in the textbook. “Just stick to the rules.”

Earlier, there was a multiplication question involving negatives. “So what’s the problem?” she asks a pupil. “If a negative is multiplied by a positive, what do you get? A negative or a positive?” The child thinks for a moment, and answers correctly. Stick to the rules, she repeats. Remember the basics.

When one asks Qongwane a question in isiXhosa, she says sharply but not unkindly: “English, please.”

Qongwane, a second-year student at UWC studying for a BA in Psychology, and the pupils are part of an innovative volunteer education programme called IkamvaYouth. She is one of 60 volunteer tutors in Makhaza, and one of more than 700 nationwide. The pupils here today are some of more than 200 in Makhaza, from Grade 8 to matric, who come twice a week.

Like many of the others, Qongwane herself went through the Ikamva programme. Now she donates her time and skill to tutor the scholastic generation behind her – a voluntary graduate tax of a kind, although Ikamva calls it “paying it forward”.

“I like working with people,” she says, “and I know how difficult it is to get attention at school. I am here to fill that gap, so the learners can get one-on-one.” If a teacher cares, she says, “she will make sure that everyone understands, but if she just goes through the syllabus and you don’t understand, you will fall behind.”

The Ikamva Youth Project is a pinprick of light in a system that fails many young people. Of those children who started school in 2003, only 49% made it to matric in 2014, and only 14% qualified to go to university (even fewer actually enrolled and graduated), according to research by Nic Spaull, an education expert and economist from the University of Stellenbosch.

Last year about 71% of those who actually wrote matric passed, and 26% got university exemption. In contrast, 80% of Ikamva’s pupils passed, with 40% qualifying for university entrance.

“We aren’t doing the same job as teachers,” says its co-founder and director, Joy Olivier. “We are not teaching any content; we are not teaching the curriculum.” Instead, she says, Ikamva does “what educated parents do – helping learners with their homework, helping them figure out what they are going to do after school, giving them individual attention.”

Teachers, she says, have big classes that range “from super-smart kids who get bored… to the kids who have just arrived from the Eastern Cape and can’t speak English and are missing the fundamental basics of numeracy and literacy”.

Ikamva began 10 years ago when Olivier and her co-founder, Makhosi Gogwana, then in their early 20s, were working at the Human Sciences Research Council, researching transformation in the science community. “Where is the next generation of scientists going to come from?” they asked. “We were shocked to see the small number of kids coming out of schools graduating with science and maths, or even being eligible to get into tertiary.”

And there was a massive difference between schools in the suburbs and those in the townships. “We were young and naïve and optimistic,” says Olivier.

Makhosi called his old school principal at Sinako High and asked if they could tutor on Saturdays. “We sent e-mails to all our friends and asked them to come; everyone said yes and we showed up with really no idea what we were doing.”

They devised a programme with pupils, and at the end of 2005 they saw 100% of their first matric cohort pass. Sixty percent got into university – an extraordinary figure by South African standards, and all of those said they would become tutors themselves. And thus began a cycle that has endured for a decade. The only requirement on the pupils is a 75% attendance rate – they cannot use Ikamva to cram for exams.

Nonetheless the inequalities are deep and difficult to overcome. Every child there, from Grade 9 to matric, told me they are taught in school in isiXhosa. But their textbooks and exams are in English. It makes some sense of the finding by Spaull that those who are taught in languages other than English or Afrikaans are more likely to be functionally illiterate by Grade 4.

Imagine, in a suburban school, being taught in English, but having to switch to isiXhosa to study a textbook or write an exam.

“So there is a huge gulf between policy and practice in education and that is a big cause of the crisis in our system.”

This conundrum about language explains, in part, why tutors spend a lot of time simply explaining what is being asked. Today, several Grade 9 pupils seem stuck on a maths problem on exponents that instructs: “Simplify without using a calculator.” (It’s “ukwenza kubelula”, a tutor explains, translating the term “simplify”). Or why, on another day, Grade 12s puzzle over an accounting question that contains the phrase, “40,000 shares were repurchased from a disgruntled shareholder.”

Repurchased? “I don’t understand,” says one.

“Buy back”, explains the tutor, Athenkosi Khese. “So we have to minus”. They ignore the distraction of the word “disgruntled”.

Khese, who is studying Management Accounting through Unisa, is one of the few tutors who did not go through the Ikamva programme himself.

But like most of the others, he is black.

“It really pains me,” says Olivier, “that white people don’t use this as an opportunity to do something about the inequality they’ve benefited from. Our tutors usually come from a poor background, so the opportunity cost of coming to tutor here, instead of getting a part-time job to help you get through university, is mammoth.”

The 700 or so tutors around the country donate about R14-million worth of tutoring and mentoring time, says Olivier. The venues, such as the Nazeema Isaacs library, are donated by local municipalities. So Ikamva’s overhead costs are minimal. It gets “significant funding” from SA corporates – which need a “pipeline” of human resources – as well as from foundations because “it’s really clear what you’re buying: matric passes, bachelors passes and then access to post-school opportunities.”

Olivier says each of the 11 branches around the country produces at least one new engineering student a year.

It also, she says, dents income inequality. In a survey two years ago of its alumni, Ikamva found that in a country where the median income for black South Africans is about R2,300 a month (compared with a median income for whites of about R10,000 a month), its graduates were earning about R9,000 a month. “So in one generation the income gap is starting to decrease.”

Ikamva helps pupils access universities: it pays registration fees and ensures applications are complete and in on time.

Most of all, it provides role models for younger students, through tutors who went to the same schools and grew up in the same townships.

“Before this, I was just playing in the street,’ says Asanda Gqamane, a Grade 12 from Harry Gwala. “I was doing nothing. Then at some time I realised I had to do something about my future and joined this group.” DM

Pippa Green is a journalist who works for the Research Project on Employment, Income Distribution and Inclusive Growth (REDI) and the Poverty and Inequality Institute (PII), based at UCT.

Photo: Nelisa Qongwane, a volunteer tutor at Ikamva helps a grade 9 student in Khayelitsha with his maths. (Pippa Green)