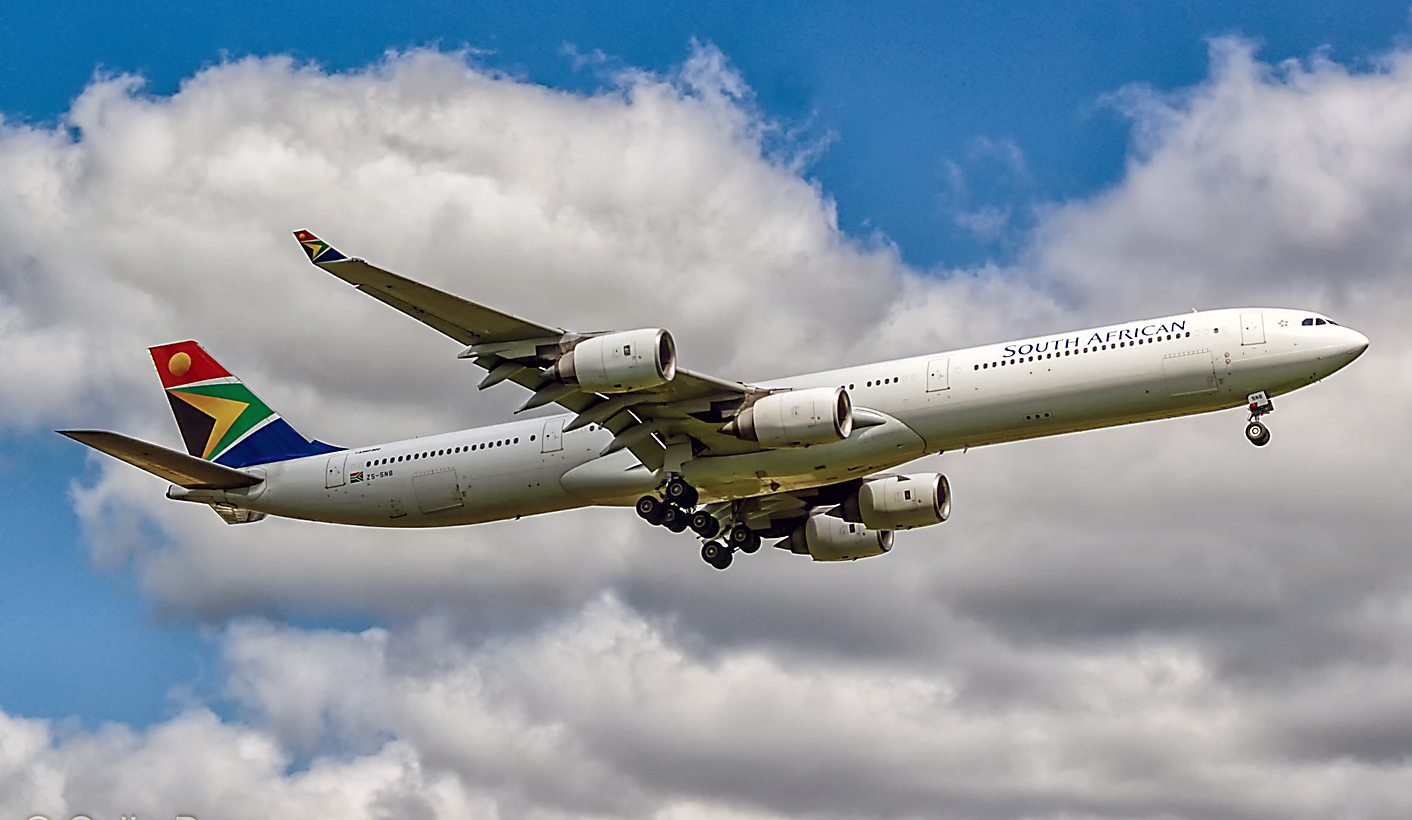 SAA pilot Captain John Harty and South Africa’s Finance Minister Pravin Gordhan are not well-acquainted, but they have something in common right now. Both men have been drawn into questionable investigations conducted by the Hawks crime-fighting unit, headed by the controversial Lieutenant-General Mthandazo Berning Ntlemeza. Harty was questioned by the Hawks after it claimed to have received intelligence that he was implicated in a dastardly plot to sabotage an aircraft at SAA. However, Daily Maverick can now reveal that SAA held its own security check and could find no credible evidence to back up allegations of sabotage at the national airline. Like Gordhan, the top pilot believes the Hawks are trying to intimidate him. By GLYNNIS UNDERHILL.

The chairman of the SAA Pilots’ Association, Captain John Harty, had just landed an SAA Airbus 340 in Hong Kong last month when news broke that South Africa’s new Finance Minister Pravin Gordhan had been sent a seemingly intimidatory list of 27 questions by the Hawks crime-fighting unit, just days before he made his critical 2016 budget speech.

The furore back home resonated with the experienced pilot, who has not taken a day’s sick leave in the 39 years he has been with SAA, yet knows well what it feels like to become embroiled in a bizarre criminal investigation.

Harty was called in for questioning in December by the Hawks, which claimed to be investigating several conspiracies to sabotage SAA. The story made headline news. His grilling turned into a 90-minute interview focusing on the sabotage allegations, including a plot by white pilots to bring down an aircraft while it was being flown by a black pilot. The Hawks claimed to have received intelligence reports that certain pilots, including Harty, had tried to recruit SAA technicians to tamper with the rudder system of a plane. And according to the intelligence information, the alleged aim of this plot was to discredit the black pilot who had been flying the aircraft.

The sabotage allegations were dismissed as absurd by Harty, who believes it is no coincidence that his trouble started just weeks after the SAA Pilots’ Association passed an unprecedented vote of no confidence in SAA chairperson Dudu Myeni, as well as its nonexecutive board of directors, last November. In the midst of a financial meltdown at the national airline, only two of SAA’s 767 pilots voted against the no-confidence motion, while 11 abstained. This vote clearly did not go down well with Myeni, who is chairwoman of the Jacob Zuma Foundation and is considered a close ally of the President. Myeni last year complained in Parliament that SAA pilots are racist, overpaid and are a “drain” on the airline.

Harty publicly responded to many of Myeni’s remarks. “What she (Myeni) should have said was: “Mr Chairman, SAA has soaked up billions of rands in bailouts over the years due to poor governance, a meddling shareholder and management that has resembled a children’s game of musical chairs,” he wrote in a statement sent out on behalf of the SAA Pilots’ Association. “As for the cost of pilots, SAA pilot salaries undergo regular benchmarking against eight other international airlines to ensure market competitiveness. At 40,000 ft, you want the best pilots at the controls of your plane — not pilots who got the job simply because they can’t be employed anywhere else.”

After flying home from Hong Kong, Harty said he had not been contacted again by the Hawks. “It was never followed up by the Hawks. Yet there was a threat in a recent article that stated that Dudu Myeni was not being investigated by the Hawks, but the Hawks said they were still investigating sabotage, which meant that my investigation was back on the radar.”

Ntlemeza’s spokesperson Brigadier Hangwani Mulaudzi declined to comment on the sabotage investigation involving Harty. “The matter is under investigation and unfortunately we don’t conduct our investigation through the media,” he said.

However, aviation sources disclosed to Daily Maverick that SAA held its own security check and found no credible security threat or risk of this nature, referring to the Hawks’ allegations of sabotage at SAA. The airline sent out a memo declaring its findings to its staff in December, although Harty has never been publicly cleared by SAA. Nor were the findings of its security check released to the public, which depends on pilots like Harty to fly them safely to their destinations.

The memo clearly outlines how there was “no credible security threat” to back up the sabotage allegations raised by the Hawks, and was dispatched from the office of Linga Moonsamy, head of department Group Security Services at SAA.

“Recent media reports claiming an alleged plot to sabotage aircraft, and the subsequent questions this has raised within our ranks has reference,” the SAA memo states. “South African Airways, Group Security services, confirms that there is no credible security threat or risk of this nature assessed or confirmed against or within SAA operations. Acts of sabotage or the threat of sabotage against Civil Aviation Operations is a very serious matter and requires certain processes of security and credibility assessments to be conducted within the Aviation Security (AVSEC) environment as required under applicable regulations and policies, which was accordingly done and calculated.”

Harty would only confirm that SAA held a security check on the sabotage allegations, and could not find any problems. “I did ask the management to clear my name as well, but that has not yet happened,” he said.

There are now fears in the aviation industry that the Hawks investigation into SAA sabotage has sinister overtones, seeing as SAA found there was no credible security risk to back up the allegations.

With the Hawks investigation still up in the air, further attempts are now being made to smear him, Harty says. The pilot has recently sent a lawyer’s letter to the South African Transport and Allied Workers’ Union (SATAWU), which claimed on its Facebook page that he diverted a Hong Kong-Johannesburg flight to Durban to drop off his family.

SATAWU, which recently came under the spotlight regarding reported rifts over union money, claims on its website: “We have also been reliably informed that SAA Pilots’ Association Head, Captain John Harty, recently diverted a Hong Kong-Johannesburg flight to Durban, merely because his family (who were on the flight with him) were headed to the coastal city. Diverting a flight without good reason exposes the airline to unnecessary risk. On the one hand it costs the airline more in terms of fuel. Secondly, it delays paying passengers, and thirdly it opens up the organisation to liability risk as said leg of the flight is not covered by insurance.”

Matthew Ramosie, aviation national sector co-ordinator at SATAWU, says the union stands by its claim. “As SATAWU we stand firm of our position in what we have raised, and are awaiting even a formal report from CAA (Civil Aviation Authority) on the same matter that the same captain violated FDP (flight duty period) of the crew, which is regulated by CAA,” says Ramosie. “Furthermore, we can’t apologise for telling the truth. In fact, we are still waiting for court papers from his lawyers, as stated that they will take us to court.”

In Harty’s legal letter, he asked the union to stop defaming him and to remove the post and apologise for it. But this has not happened, although Webber Wentzel has described the post as “patently false”, and says it defames their client.

“There is no truth in this at all,” agrees Harty. “In my 39 years of service to SAA, I have never flown from Hong Kong to Durban and this is a serious allegation which questions my professionalism and ethics. I know it is all intimidation, so I keep that in mind and just get on with my job.”

There was no evidence to substantiate any of these claims, and Harty says it could easily have been verified if SATAWU had researched it before publishing.

“Flying a scheduled commercial flight is not like driving your car and deciding to stop off en route for a family visit. The aircraft is a long-range four-engine Airbus costing over R3bn new, up to 75m in length, and flight plans need to be filed, clearance obtained, immigration and customs notified, refuelling arranged etc.”

In addition, says Harty, if it were true he had diverted an SAA plane, his employer would have been all over him like a rash.

And he certainly would not still be flying as captain on board SAA’s Airbus 340 as he did to Hong Kong, if any of the Hawks sabotage claims had turned out to be true. DM