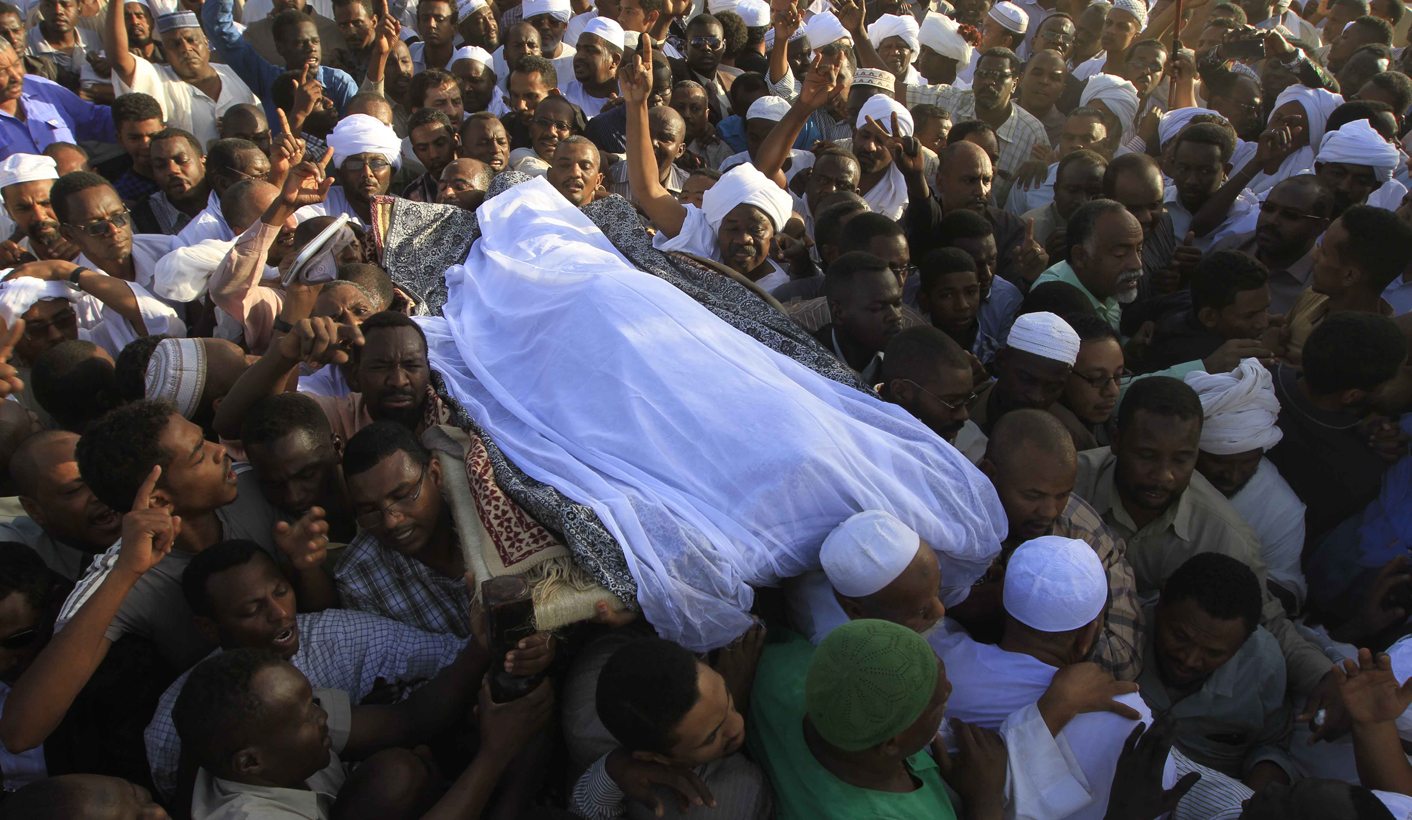 The death of Sheikh Hassan al-Turabi on Saturday marks the eclipse of a radical era of Sudanese Islamist politics. But Turabi’s legacy is still keenly felt in the country’s fractured domestic politics and isolated international position. By Magnus Taylor for the INTERNATIONAL CRISIS GROUP.

Turabi, a lawyer and Islamic scholar, was the intellectual architect of the National Islamic Front (NIF), a group of Islamist politicians and intellectuals which took power through a coup in 1989 and, following its evolution into the National Congress Party (NCP), rules to this day. This was a joint operation between Islamist politicians and army officers, led by Omar al-Bashir, eager to see the back of then Prime Minister Sadig al-Mahdi’s chaotic administration. They were also wary of a peace process with the southern rebels of the Sudan People’s Liberation Army (SPLA), which was set to challenge the Sharia laws imposed by government in Khartoum.

To disguise the true nature of the new regime from the anti-Islamist government in Cairo, Turabi famously told Bashir to “go to the palace as president” while sending him “to prison as an inmate”. The plan worked: Egypt welcomed the military intervention and Turabi was soon released to take up an influential, but slightly removed role as the regime’s ideologue-in-chief, operating mainly from his house in Khartoum.

In Sudan, Turabi is particularly remembered for the pivotal role he played in the Islamisation of Sudan’s laws, a process which formally began in 1983 while he served as Attorney General to then President Gaafar Nimieri. The attempt to impose Sharia nationwide, including in the mainly Christian south, was a major driver of the war with the SPLA that lasted until 2005.

Internationally, Turabi is perhaps best known for his attempt to turn Sudan into a centre of Islamic learning and leadership through the formation of the Popular Arab and Islamic Congress (PAIC), which invited notable figures from international Muslim and Islamist movements to Sudan, including Osama bin Laden, Yassir Arafat and Rached Ghannouchi.

Turabi’s internationalisation of the NIF’s Islamist revolution proved problematic. Bin Laden lived and operated businesses in Sudan from 1991 to 1996, between stints in Afghanistan, before his expulsion at the request of the U.S. and Saudi Arabia. In 1995 a radical Islamist group operating from Khartoum, possibly with the knowledge of some in the government, attempted to assassinate the then Egyptian president, Hosni Mubarak. In response to the attack, the UN imposed sanctions and the U.S. added Sudan to its list of State Sponsors of Terrorism, where it remains.

Although the allegations surrounding the Mubarak assassination attempt were never proved, Sudan had got itself an unwanted reputation. In 1998 the Clinton administration, in response to al-Qaeda attacks on embassies in Kenya and Tanzania, bombed a pharmaceutical factory in Khartoum that the U.S. said was producing chemical weapons for al-Qaeda – an allegation that was never proven.

This was the high point of both Sudan’s linkages with international extremism and also Turabi’s authority. Turabi had by then become Speaker of Parliament and, seeking to reduce the president’s powers and increase his own, in 1998 he attempted to introduce the position of prime minister and remove Bashir’s powers to appoint provincial governors. Bashir, perhaps underestimated by the more cerebral Sheikh, made a pre-emptive strike. Confident of his support from the armed forces, the president dissolved parliament and declared a three-month state of emergency thereby strengthening his hold on power. Soon after, Turabi went into opposition and founded the Popular Congress Party (PCP).

For the next fifteen years Turabi remained active in politics but his status as a member of the opposition prevented him from effecting real change on an increasingly dictatorial system. Turabi sought alliances with other opposition groups. In 2001, he even signed a Memorandum of Understanding with SPLA leader John Garang. But it was his old protégé, a younger and more moderate Islamist, Ali Osman Taha, who ultimately ended the war in the south through negotiating the Comprehensive Peace Agreement (CPA).

Despite high-profile coverage in Sudan of Turabi’s political manoeuvers, he never regained the influence he enjoyed in the 1990s. Toward the end of his life he engineered an apparent rapprochement with Bashir over the “National Dialogue” – an unconvincing effort to negotiate a political settlement with opposition groups that may have been an attempt to secure his legacy as a unifier.

Turabi’s marginalisation in later life is a useful indication of the trajectory of Sudanese politics since his split from the ruling party in 1999. This has seen the NCP move further away from the radicalism of the NIF era and toward a more pragmatic form of government that would see it offer intelligence cooperation with the U.S. after 9/11 and allow South Sudan to secede in 2011.

That Sudan has been unable to achieve the normalisation that it seeks in its relations with western powers is largely a consequence of the NCP’s ineffective militarised approach to tackling domestic conflict, particularly in Darfur, where thousands were killed or displaced in a counter-insurgency that failed to defeat the rebels, rather than genuine international fears of its Islamist pretensions. And even though Turabi may have spent more time in opposition post-1999 than he did in government before it, he bears much responsibility for the system that produced the NCP dictatorship of Omar al-Bashir. DM

Magnus Taylor is Horn of Africa Analyst at the International Crisis Group.