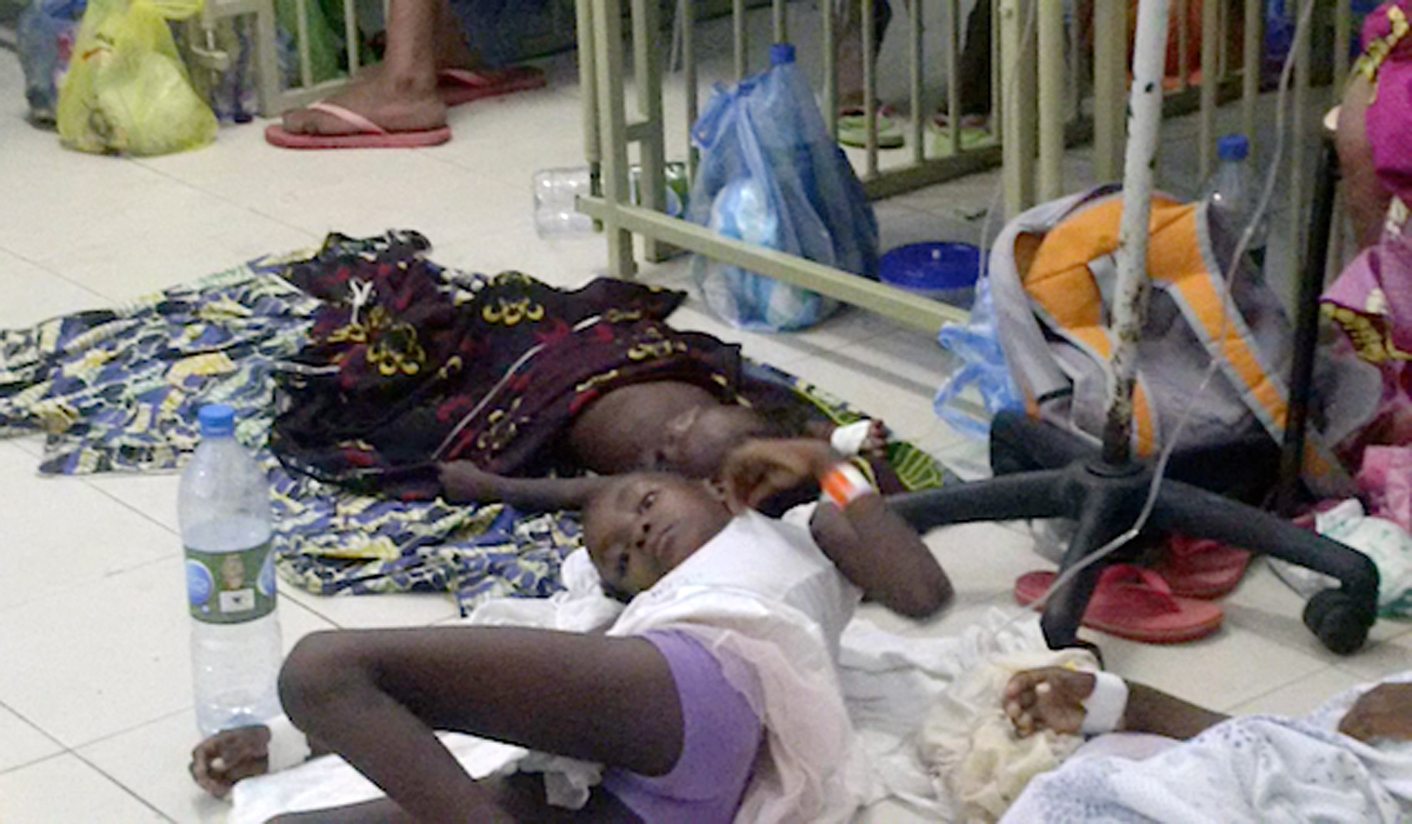 Américo Boavida hospital in Luanda was named for the doctor-turned-freedom fighter who saved countless lives in Angola’s long war for independence. But if he knew the kind of treatment patients received now in the hospital that bears his name, he would turn in his grave. By RAFAEL MARQUES DE MORAIS.

There are more than 40 people in the room, most of them sitting or lying on their cotton wraps on the floor. The heat is unbearable, as is the stink of sweat and dirt. The windows are permanently left wide open to try to offset the stifling, oppressive atmosphere. It doesn’t help. Just outside the windows at the back of the building, broken sewers add a horrible, nauseating stench to the air.

This sorry scene is repeated in every ward in the paediatric block, where relatives lie prostrate the length of the corridors, unable for lack of space to get any closer to their sick children.

Welcome to the Paediatric Unit of Américo Boavida Hospital in Luanda, named for the doctor-turned-freedom-fighter known in the field as Ngola Kimbanda (the chief healer). He must be turning in his grave. It’s the second largest hospital in Angola. Only the Josina Machel hospital is bigger, but it is in just as sorry a state now.

In Ward 4 there are seven beds, each shared by two patients. Another nine children lie on the dirty floor, with nothing but their mother’s cotton wraps to cushion them. Everyone else in the ward is a family member desperately trying to look after their child. Some sit, some lie down on the floor, some nurse their babies, some are hopeful, some despair.

Threading her way through the narrowest gap is a single nurse, her professionalism denoted by the surgical mask she wears and her frantic attempts to attend to everyone even though one pair of hands is just not enough. She bustles from one side to the other, in perpetual motion and sweating buckets, replacing saline drips, monitoring blood transfusions. Her work station, in the centre of the room, bears syringes and little else. You’d think you were in a field hospital in the middle of a war zone. Bags of saline are placed on the window sills directly above the broken sewers. There is no space alongside the beds nor stands from which to hang them immediately above the patients.

One year-old Natália Julião dos Santos is lying on the floor with a saline drip in her arm, her aunt lying alongside her to attend to her needs. She is a survivor. Her three older siblings died in the space of 24 hours, their short lives abruptly terminated by a yellow fever epidemic hours before Natalia was admitted to hospital. The epidemic, on the outskirts of Luanda, has already claimed an estimated 100 lives (Read: Yellow Fever Epidemic in Luanda Claims Three Siblings).

There was a 15-hour wait for admission before she could even be placed on the floor of the ward and put on a drip. She needed a blood transfusion but as her family hadn’t donated blood, she couldn’t have it. The system is pragmatic: families must give blood before their own relatives are allowed transfusions from the existing hospital stock.

Give blood to get blood

It was after 10pm when I was directed into the basement where the blood collection and donation centre is located. Between the staircase and the small ante-room there were close to 40 people, some lying on the floor, as they waited their turn to give blood.

José António is the father of 18 month-old Carlos José. He had been waiting since 8am to give blood so that his baby son could receive an emergency transfusion.

“Before we came here to this hospital, we went to the Estalagem health centre in Viana, to the Kapalanca Hospital in Viana and to the Cajueiros Hospital in Cazenga,” says the father, whose baby has been diagnosed with malaria.

“Every hospital told us that they are out of the drugs to treat malaria, and don’t have blood supplies for transfusions. They all have to transfer patients to the Americo Boavida hospital. And here they just tell us to keep swabbing the patient with a damp cloth, because there are no drugs and, in effect, no care either.”

The other donors in the queue have also been waiting for more than 15 hours. Their accounts are remarkably similar. A glance into the blood donation centre gives you a clue as to why the delay. There is one technician and one assistant to carry out the entire process, in chaotic working conditions. It’s a miracle they can get the facts straight as they have to wait for the lists of those who need blood and their respective blood donors, lists which have to be brought to the donation centre by a private hospital guard.

Another unwelcome revelation is the office of the main doctor on call, on the opposite side of the corridor to the wards. A father emerges shrieking, the limp body of his dead child in his arms. The security guards ask the other parents with children waiting to be seen to move aside as far as possible.

Inside the office, a Cuban doctor, her face protected by a surgical mask, tells me what she knows about the tragedy that took the life of Natália Julião dos Santos’s three siblings. She says there was nothing that could be done to save them from yellow fever. She is genuinely sorry. You see the lines of fatigue etched on her face. Other than the desk where she’s sitting, and an examination table alongside, the room is bare.

Another doctor, speaking only on condition of anonymity, reveals that, on average, between 25 and 30 children die every day at the

Américo Boavida Hospital, the majority of them for the lack of basic medical help.

“They run out of space in the morgue so often they just have to leave the dead in the nursing stations,” said the doctor, who described the state of the hospital and the mortality rate there as “truly a crime against the people”.

Opinions on the state of public health in Angola generally fall into one of three camps: For those of a strong religious persuasion, only God can help. For critics of the government, only a change of government will allow for the health system to be restructured so that it can treat people in a humane way. For those still loyal to the MPLA regime, their attitude is summed up by a party member who focuses on the positives: “You can’t only look at what is bad. There are many good things that have been done. It’s better to highlight the good that has been done.”

So here are some positives: the Agostinho Neto University’s Faculty of Medicine is located in the same hospital grounds. It’s a modern, new building. And the Américo Boavida Hospital’s front entrance has a clean and tidy garden.

Does that mean we should ignore the broken sewers and open drains? What is good about a system that is killing between 25 and 30 children every day at the Américo Boavida Hospital? Are their lives worth nothing?

The last word must go to the father of little Carlos José, still waiting for his blood transfusion. Shaking his head in disbelief, he speaks for all Angola when he says: “This is simply inhumane.” DM

Photo: Natália, covered with a wrap, in Ward 4 of the Paediatric Unit of Américo Boavida Hospital.