Op-Ed: And now for something completely different – a more inclusive Hollywood 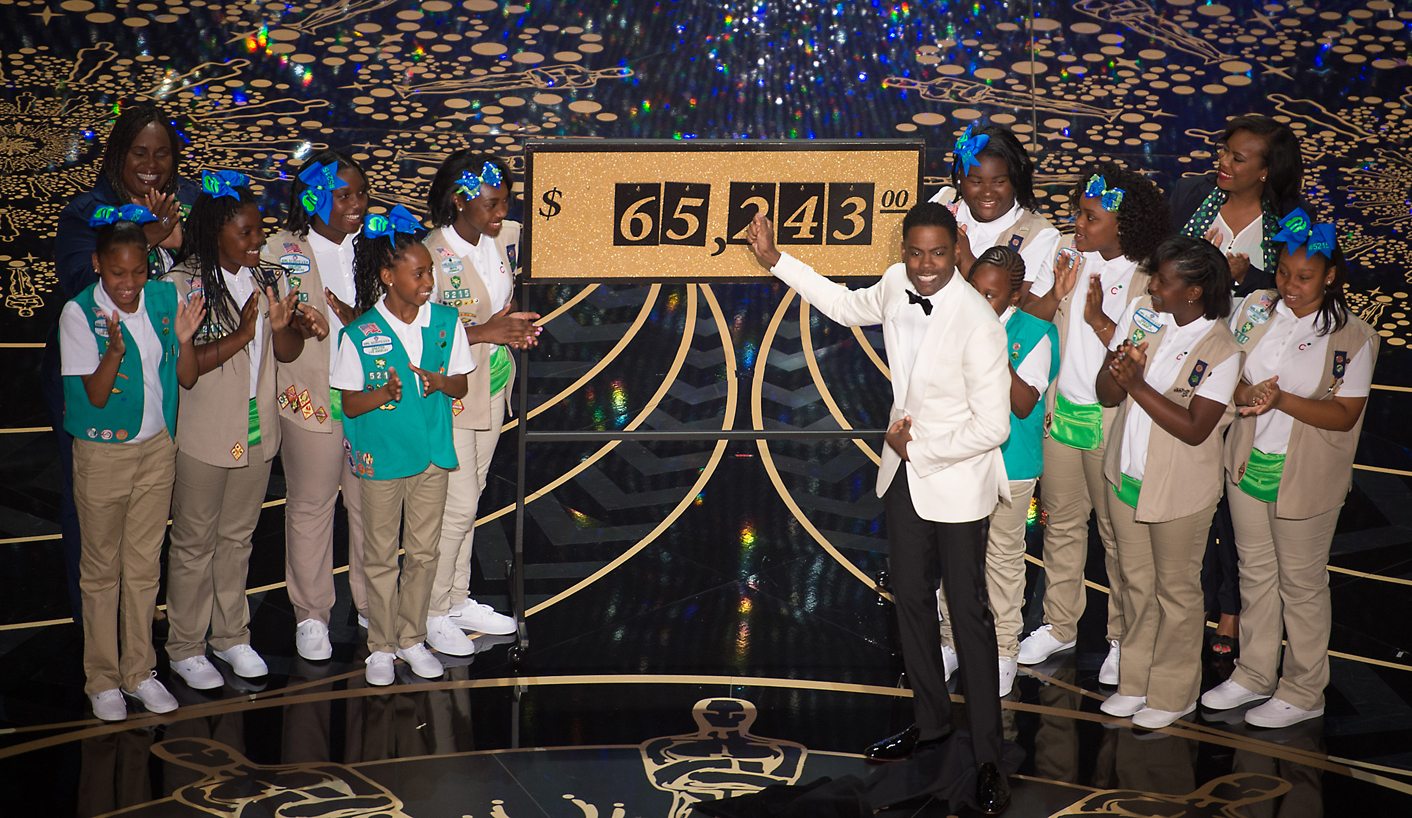 Photo: A handout image provided by the Academy of Motion Picture Arts and Science (AMPAS) shows host Chris Rock (C) and Girl Scouts of Los Angeles during the live ABC Telecast of the 88th annual Academy Awards ceremony at the Dolby Theatre in Hollywood

They’re the most important people on earth, and they know it. And this is the One Thing that they have been moving towards. The red carpet has been walked, the conductor has struck up the music, the curtain has been raised. And that man up there, the one who was so good in That Movie but not quite good enough to have his name read out tonight, has just read Your Name. Yes, it’s Oscar night, and you are about to get the dues you’ve been paying for. By TONY JACKMAN.

Oscar Night is at once the most meaningless yet apparently meaningful event on the planet (if you’re not into sports). The entire world has tuned in, millions of Less Than Famous people imagining what it would be like to be in that audience and have your name called out, while Meryl and Jane or Brad and Leo force grins in their seats as you hug everyone you can’t quite see through your welling eyes while stumbling to the stage to collect the undeniably phallic trophy. (While avoiding the gazes of Denzel and Whoopi, who, we might remember, actually have won Oscars, Goldberg being only the second black woman to win after Hattie McDaniel for Gone with the Wind in 1940. Goldberg won in 1986 for The Color Purple, and 46 years is a long time, even in the movies.)

You choke back a tear, wobble on your heels for effect, brush a strand of stray hair from your face, look up into the Gods as if this couldn’t really be happening to you, and stammer the first things that come into your head. God and your mom are thanked before the people who actually made your award possible, which is like thanking Him (or, for all we know, Her) for the food you are about to eat while the peasants who toiled the fields to grow the vegetables eat pap and mielies in their farm hovels.

If you’re clever and erudite, you say Something Profound about Something Meaningful (cue Leonardo DiCaprio). If you’re not quite so clever, you let your emotions overwhelm you and sob hysterically. They call it the Halle Berry Moment.

The one moment every Oscar winner shares is the instant when you can no longer put off the part where you desperately try to remember the names of all those people you worked with for five months while making the movie, then forgot about. (Cue that woman who got the award for costume design for Mad Max and said something or other about, you now, the planet, whatever.)

The Oscars ceremony is the glittering, frothy counterpoint to the news that streams into our living rooms from CNN, Al Jazeera and Sky News. It has such apparent importance, presents itself as the pinnacle of everything that matters, yet in truth it has no substance or value other than to make a lot of people feel good. But we need such counterpoints to the reality of the actual world that the news channels bring us, which is not to say that they do not have a human value. By knowing the worst of the world, we are better armed to fight the terrible things. When the real world gets too much for you, switch out and switch in to something that doesn’t matter at all (unless you’re a nominee) or get lost in one of the movies.

And sometimes the lines cross between the arts of the movie and the music. To have John Williams being praised by R2D2 and C3PIO for his 50 years of producing grand movie themes is sweet, but it was Lady Gaga (following a trenchantly genuine appeal by Vice-President Joe Biden) who brought home the human importance of fighting the scourge of sexual abuse of women and men. If you weren’t convinced by Gaga as an actor in American Horror Story: Hotel (I was, for the record, and I’d be surprised if she herself did not in time land an Oscar nomination), you could not but be moved by her ferocious rendition of her song ‘Til It Happens to You’. When the curtain behind her parted and dozens of sexual assault victims strode forward to reveal arms tattooed with ‘Survivor, Not Your Fault’, and ‘Unbreakable’, the combination of her performance and the reality of victims standing before a world audience to reveal something so desperately personal became the true Oscar Moment for 2016.

That any such moment could become the nexus of these particular Oscars was a mighty achievement. This was the year when it all could have gone so badly wrong, and at one stage in the past few weeks you had to wonder whether they should bother to stage the show at all.

The issue of African-American representation in the choices made by the Academy of Motion Picture Arts and Sciences is a valid one which, despite the good humour of a host of famous American black artists from Chris Rock and Kevin Hart to Angela Bassett and Whoopi Goldberg, was brought home forcibly by host Rock’s pithy script.

The issue has to be dealt with, fast and properly. It’s as deeply entrenched in the US movie culture as the habit of white Capetonians driving expensive cars past township shacks or beer-boep white okes around the braai using the K-word with their mates while the ‘ladies’ are in the kitchen making the salads.

If you scanned the audience at any time on Sunday (or Monday, if you were watching the DStv repeat) night and started counting, you’d only get to a black face in every 10 to 15 seats or so. It must be a bit like a posh Cape Town restaurant after 20:00 or being on Australian MasterChef, where almost every contestant in seven seasons has been white, with the odd Asian candidate thrown in like a couple of olives in a salad. It’s brilliant television, but it quietly and inadvertently says something about modern Australia, and raises uncomfortable questions about their society.

At least America has tried, and still tries, to deal with its problems of race relations. Its artists and commentators speak out, whether in comedy sketches, on chat shows or news commentary, and its people insist on having their voices heard.

And even the Academy’s president, Cheryl Boone Isaacs, spoke boldly about the importance of making Hollywood and her academy more inclusive. Sure, she had no choice in the end, but as an African-American herself she evidently meant what she was saying.

One day, when Leonardo DiCaprio is US President and trying to dig America out of the Trump years, the Academy needs to be able to look back at 2016 as the Oscar Moment when things started to change, deeply and fundamentally. Hooray for a more inclusive Hollywood. DM

Photo: A handout image provided by the Academy of Motion Picture Arts and Science (AMPAS) shows host Chris Rock (C) and Girl Scouts of Los Angeles during the live ABC Telecast of the 88th annual Academy Awards ceremony at the Dolby Theatre in Hollywood, California, USA, 28 February 2016. The Oscars were presented for outstanding individual or collective efforts in 24 categories in filmmaking. EPA/VALERIE DURANT / AMPAS