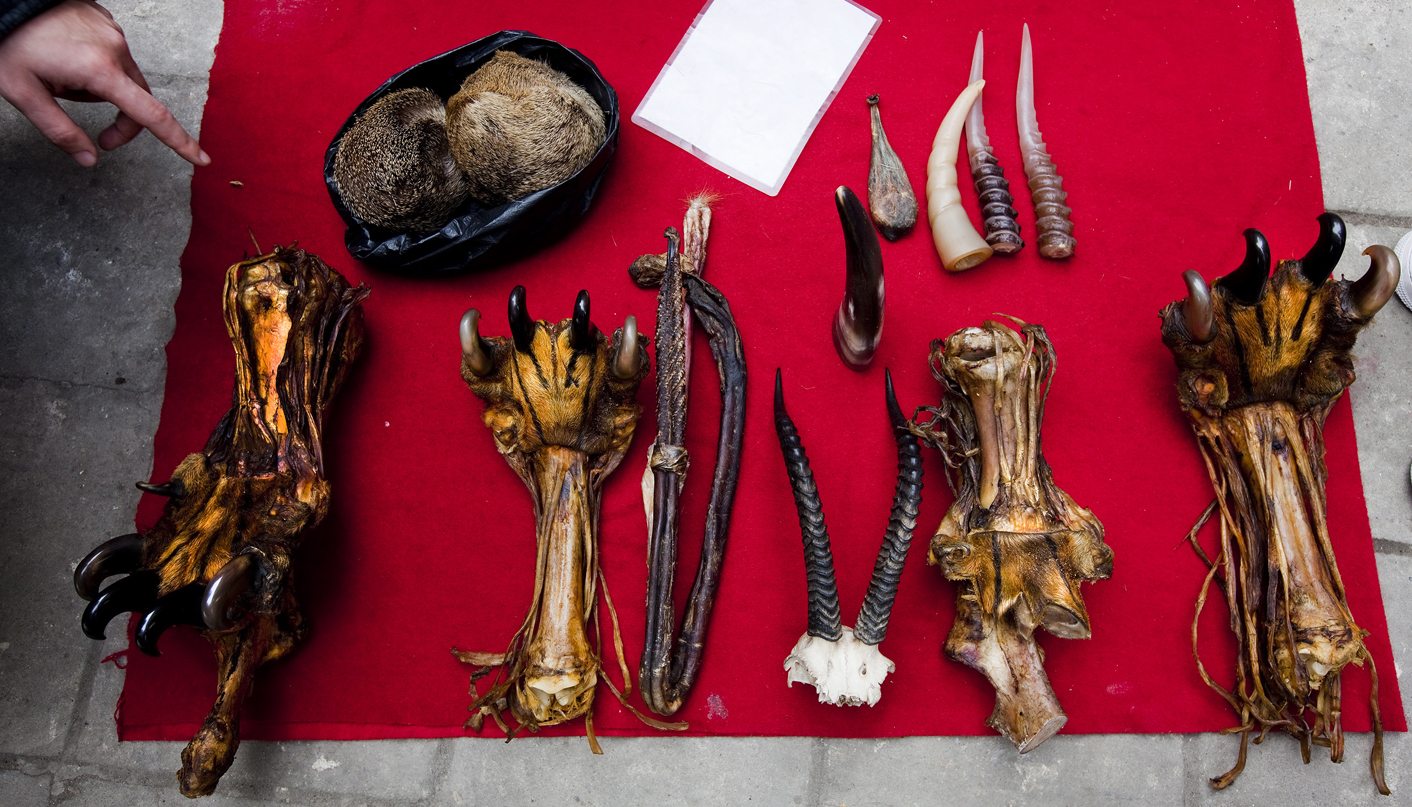 Africa’s extraordinary and charismatic wildlife is clearly under siege from the wrecking ball of Chinese demand. Heading the list of critically damaged species are elephants. As the world’s largest consumer, Chinese hunger for ivory is stimulating transnational organised crime, trashing ecosystems, flooding areas with weapons, perverting legal systems and causing mounting tension in elephant-range communities. Part 3 of a three-part series by DON PINNOCK.

According to detailed reports by international environmental organisations such as the Born Free Foundation and the Environmental Investigation Agency, Chinese nationals have been involved in ivory-related offenses in virtually every African range state. They are closely connected to all steps along the ivory value chain other than physical poaching, for which they use African proxies. At Bole Airport in Ethiopia, a conduit for flights to Asia, a CITES report noted that more than 85 percent of transit passengers who were caught with illegal ivory in 2014 were Chinese.

The Born Free Foundation has estimated that about 70 percent of ivory in Chinese markets is illegal and that the laundering of illegal wildlife products is widespread. Its report Africa’s Curse, written with C4ADS, describes the ivory trade as a massive, ongoing illicit resource transfer from Africa to Asia:

“It’s robbing local communities of an important source of potential wealth, destroying the potential of critical economic sectors such as tourism and financing a wide range of predatory and corrupt actors across the continent. Locals incur the majority of risk and bear the majority of costs, but receive the minority of profits.”

Chinese law prevents the killing and sale of protected species and last year Premier Xi Jinping pledged to enact “a near complete ban” on the import and export of ivory. China’s Wildlife Protection Law is undergoing its first major revision in 26 years since it came into force.

There was hope that this would signal a crackdown on poaching and wildlife trade. However, the draft, currently under public consultation, states that wildlife can be used in the manufacture of Chinese traditional medicine, healthcare products and food for profit. According to the EIA, if this draft becomes law it would open rather than close the loopholes in wildlife trafficking.

Elephants Without Borders estimates Africa’s present elephant population at about 600,000. Using carcass counts and consignment seizure numbers, researchers calculate that about 230,000 elephants were poached between 2009 and 2015. TRAFFIC, an investigation agency established by the World Wildlife Fund for Nature and the International Union for the Conservation of Nature, found that in 2013 the kill rate was running at 50,000 a year, yielding roughly 400 tonnes of ivory.

The effect on herds is devastating. By targeting tuskers, poachers are culling prime-aged males, skewing sex ratios and disrupting families, resulting in increased number of orphans. In short, elephant populations are crashing and, within most of our lifetimes, will probably become extinct in the wild. This is also true for rhinos, pangolins, tigers, black bears and many other species that are victims of the Asian market.

According to the report Ivory’s Curse by the Born Free Foundation, there are three main elephant killing fields with a fourth, southern Africa, soon to follow as more northerly herds are shot out. These are West Africa, the Congo Basin (home to forest elephants) and the East African savanna.

In these areas, according to the report, ivory poaching has increasingly become a lifeline commodity for militias excluded from the global financial system such as the Lord’s Resistance Army in Uganda, the Sudanese Janjaweed and al-Shabaab in Somalia. Much of the killing has been to fund wars.

Large tracts of northern and central Africa are ungoverned and highly insecure for both humans and elephants, providing easy access for armed groups. North and South Sudan have been almost entirely stripped of once-huge herds of elephant, buffalo, giraffe and zebra. The ongoing conflict in South Sudan has seen the elephant population there drop from 130,000 to fewer than 5,000 today.

North Sudanese militias sanctioned by the Khartoum government — including the Janjaweed which committed atrocities in Darfur — were reported to be mounting ivory raids into Chad, Cameroon, the Central African Republic and the Democratic Republic of Congo. In the DRC they compete with the Congolese army, FARDC, who are the region’s worst poachers. This hunting is a continuation of wildlife harvesting across equatorial Africa that saw more than 3-million elephants killed in the 19th century.

Equatorial poaching is increasingly targeting secretive forest elephants which have harder ivory favoured by Japanese carvers for hanko stamps used to mark documents with sealing wax. In Gabon, commercial logging — largely under Chinese concessions — is driving roads deep into the rainforest, providing access to poachers who use logging containers packed on site to smuggle ivory.

However, according to Ivory’s Curse, the highest level of elephant poaching is in East Africa where the main enabler is not armed militias but state corruption. Between 2010 and 2012, hundreds of live animals were captured and shipped out of Tanzania, without legal documentation, in one case on a Qatari military plane.

Tanzania is the elephant poaching epicentre. In the 1970s the Selous-Mikumi region in southern Tanzania had one of the world’s great elephant herds, numbering well over 100,000. Today there are about 13,000. Poaching is done with military precision. Last month, poachers shot and killed the pilot of a conservation agency helicopter which was tracking them.

Born Free warns that southern Africa, with two-thirds of Africa’s surviving elephants, is the last haven. The area, it says, is likely to see a rapid increase in poaching in the near future as elephant populations decline elsewhere.

There are already alarming incidents, such as the ongoing cyanide poisoning of waterholes in Zimbabwe which has killed hundreds of elephants and other animals. Rampant rhino poaching in Kruger Park serves as a warning about the difficulty of ensuring the future of southern elephants.

What is to be done? A study, Species of Crime, by Jackson Miller, Varun Vira and Mary Utermohlen on African wildlife trafficking says understanding the flow of ivory is essential if it’s to be contained.

“Ivory flows upstream along its value chain, from low-value poaching in the ‘bush’ across Africa into the hands of established African and Asian criminal networks. These move it through the international transport system to market tens of thousands of miles away.

“After a tusk is removed from an elephant, there is an abrupt transfer from the nonprofessional but often highly militarised poaching networks that carry out the killing, to more professional trafficking networks. These are capable of nesting their illicit activities within the legal international trade and transportation systems.”

The value of ivory or any poached species increases in value with the distance from the killing. On average, the price increase for ivory between the poacher and final sale in China is around 4,000%. In line with their particular skills, each actor occupies a unique place in this value chain. One of these, often unknown to themselves, is legitimate container firms.

According to the Species of Crime report, many Asian organised crime networks appear to be consolidating and expanding their operational range on both ends of the chain. They’re reaching ever closer to the actual source of ivory in Africa, while expanding from trafficking into the Asian retail sectors, then deeper into direct involvement with black market carving factories.

With increasingly professionalised networks, they’re also involved in the movement of abalone, narcotics, weapons, precious minerals such as diamonds and coltan, human trafficking and money laundering.

According to Ivory’s Curse, the way to contain poaching is to harden the environment through which ivory moves, making transmission too costly and dangerous for traffickers. Given the poverty in Africa and the remoteness of wild animal ranges, it says, the killing is difficult to stop. Changing consumer tastes at the Asian end of the chain may also take too long, leading to species extinction before it becomes effective.

The vulnerable point is the transmission network — the forest edge to African ports and landing ports in Asia. If these could be hit hard, says the report, with kingpin traffickers ending in jail and consignments constantly disrupted, it would make the whole exercise too costly for traffickers and stifle the value chain.

The biggest stumbling block, according to the Born Free Foundation, is corrupt officials, particularly in Africa. This corruption, it says, goes all the way from crooked customs, CITES, police and park officials to entire government departments and elected executives.

As China increases its investment and influence in Africa, governments are clearly unwilling to upset relationships by condemning the damaging environmental practices that follow the Asian giant’s voracious demand for the continent’s raw materials.

The massive decline of elephants and rhinos are just two of many examples that suffer from this lack of restraint or official sanction. As earlier colonial regimes have demonstrated throughout history, there is a permeable margin between commercial extraction and looting. DM

This is the final part of a three-part series.