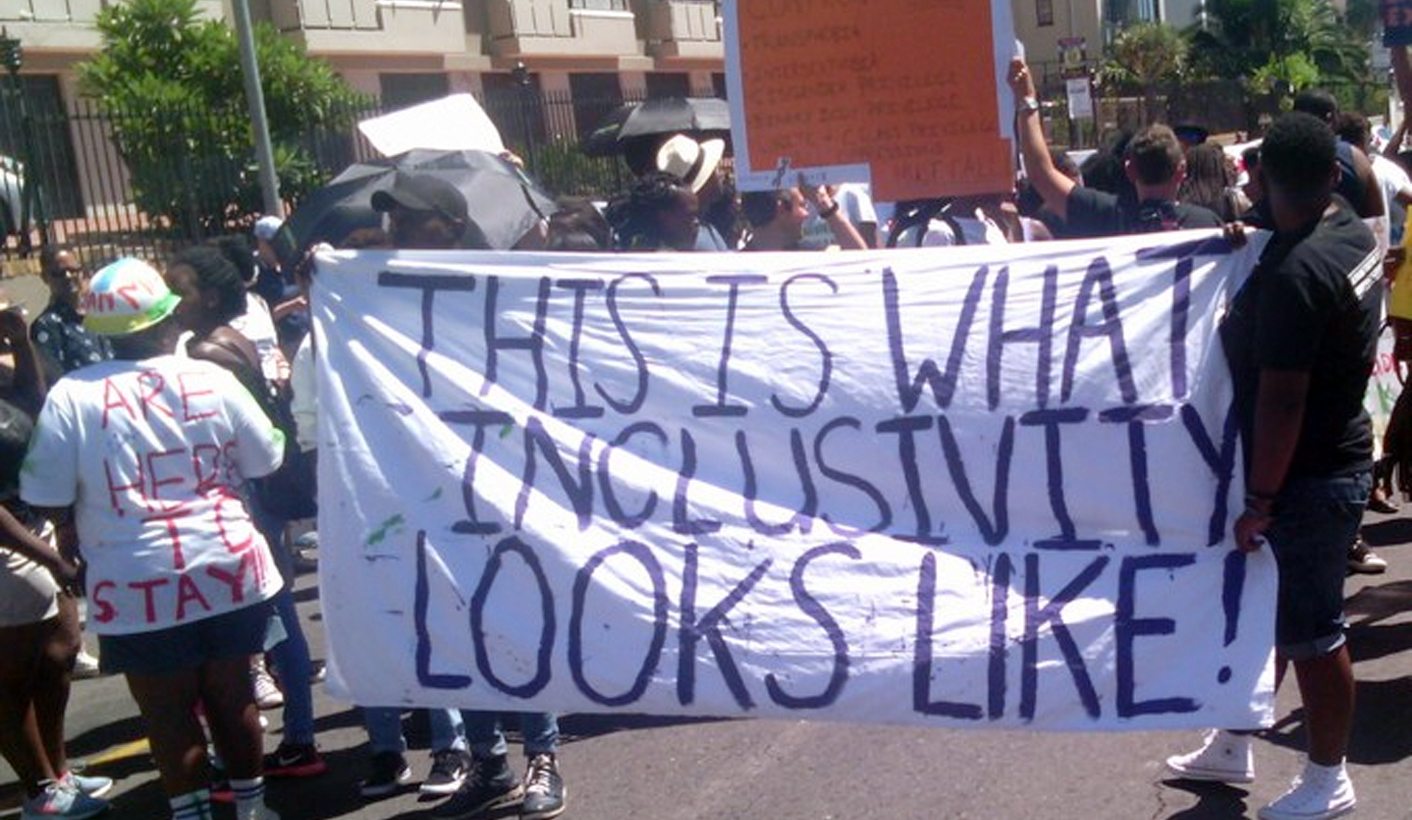 The annual Cape Town Pride march proceeded through Green Point yesterday (27 February). However, at the Green Point Traffic Station, a few hundred supporters of Alternative Inclusive Pride protested against the main event, accusing it of excluding lesbians and black people.

The confrontation of Cape Town Pride by gay and lesbian activists who accuse the organisation of being exclusive appears to be turning into an annual event (see 2014 and 2015 reports).

Funeka Soldaat of Free Gender explained in a statement earlier this week the reasons for the confrontation: “In 2014 Free Gender suspended its participation in Cape Town Pride because it continues to exclude lesbians and black LGBT in decision making when planning for the Festival. When we attended or participated in the events, it was through invitation by a few white gay men who are gatekeepers in Cape Town Pride. We have repeatedly noted the exclusionary practises of those who organise Cape Town Pride. This is a problem with a long history.”

Zethu Matebeni, one of the organisers of the silent protest said, “Cape Town Pride event should not be run by three white gays who actually do not care about LGBTQIAPK [lesbian, gay, bisexual, transgender, transsexual, queer, intersex, asexual, panssexual] issues in all communities. We cannot be silent and be part of a pride event that pushes an agenda of one race.”

But Tommy Patterson director of the company that organises Cape Town Pride dismissed the accusations, saying that the event involves all races. “We are a totally multi-racial and multi-gender organisation where everyone is welcomed and receives the same treatment.” He said that the organisers of the event are made up of people of different races.

Sharon Cox, the manager of Triangle Project, a gay rights and support organisation, questioned the integrity of Cape Town Pride.

“Pride has completely lost its meaning. We have nothing against the celebrations but the event should focus more on awareness of issues affecting LGBTIAPQ. The way they are doing it now does not speak to the realities of people,” said Cox, pledging support for the silent protest.

A large crowd (over a thousand) participated in the main march at 12pm. The protesters joined the march.

But there was more controversy when the march reached Green Point Park. Participants had to pay R40 to take part in the event in the park. This did not go down well. “There are a lot of people who would like to get into the park but they do not have the money. Is it not supposed to be an all inclusive celebration?” asked Estian Smit from Gender Dynamics.

Patterson authorised for everyone to enter the park provided no-one intended to disrupt the celebrations. Nevertheless, few of the black participants in the protest went in.

“The food sold in the park is expensive. We also cannot yearly promote the same elite business people. Why not take the event to black townships like Gugulethu?” said Matebeni. DM