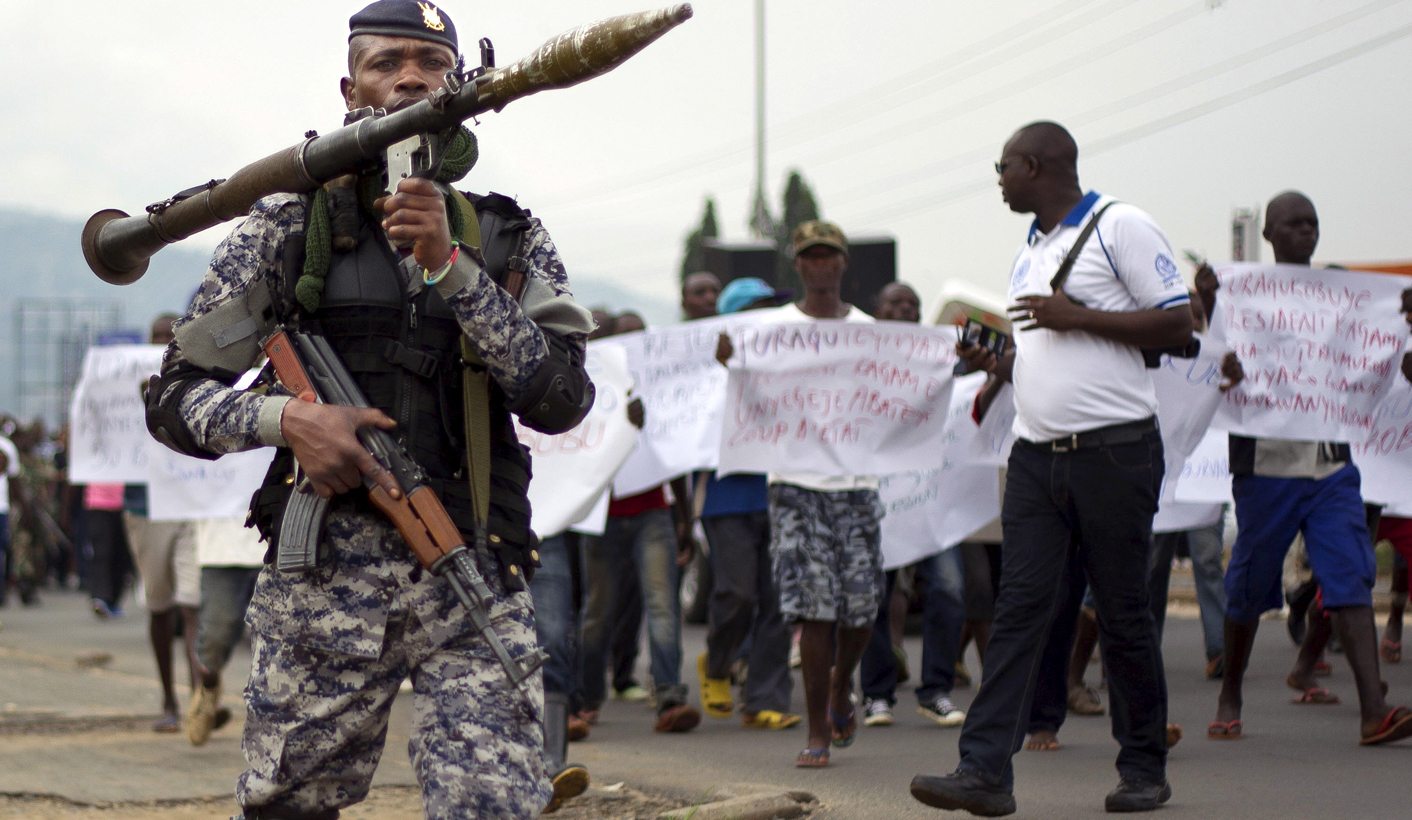 Amid continued violence and a dangerous polarisation between the Burundi government and opposition, a delegation of African Union (AU) heads of state will visit Bujumbura on 25-26 February. Mandated by the recent AU summit and led by South African President Jacob Zuma, the five heads of state need to deliver tough messages to both President Pierre Nkurunziza and the armed opposition. These should include insistence on a credible dialogue outside the country, an end to the armed opposition’s provocative attacks, a halt to impunity and ongoing killings, and respect for the Arusha Peace Agreement that brought an end to the country’s twelve-year civil war. By the INTERNATIONAL CRISIS GROUP.

Recent Crisis Group research in Bujumbura, Kigali, Nairobi and Brussels, points to an increasingly volatile situation. Since the attacks on military installations in the capital on 11 December 2015, the regime is further cracking down on the few dissenting voices that have not fled the country, and its Imbonerakure militia is taking an ever more prominent position in the fracturing security forces. With no plan but to stay in power as long as possible, the regime and its hardline supporters are increasingly turning to an ethnic rhetoric that unjustifiably paints all opposition as a plot by the minority Tutsi community. To contain the crisis and put the country on track to a sustainable peace, the AU, European Union (EU), UN and other international partners need to focus on four key demands, backed up by pressure in four key areas.

Four actions the AU High-level Delegation and international partners should insist on:

The government of Burundi is persuaded that it does not need to talk to the opposition, the vast majority now driven abroad. It is therefore pushing ahead with a “national dialogue” in Burundi. This is dangerous and short-sighted. Both within the country and outside, there is anger at government corruption, lack of development and violence. Without real talks starting soon this will translate into further armed resistance. Because most of the opposition is afraid to go home, and with good reason, the dialogue should be held outside the country, without preconditions, and with appropriate security measures for all parties.

By militarising the crisis the armed opposition is fuelling the regime’s siege mentality and ensuring that hardliners keep the upper hand. Its members and backers need to understand that their actions could lead to even greater violence against the populations they purport to protect. The AU delegation and other international actors need to put pressure on the armed opposition to stop its attacks and provocations.

The government made some cosmetic improvements in anticipation of various high-level visits this week, including that of the UN Secretary-General on 22 February. It cancelled international arrest warrants for those alleged to have taken part in the failed May 2015 coup, including fifteen political exiles. During the visit of the UN Secretary-General it promised to release 2,000 prisoners, though it is not clear if this means government opponents. It has also allowed two media outlets to reopen. However, killings on the streets of Bujumbura, which spiked following the mid-December attacks, have continued. The extent of the violence remains contested, but available evidence indicates a pattern of violence and counter-violence, with many dozens dead already this year. Aside from the need to clarify the scale of casualties and respective responsibilities, there is clear risk of a cycle of violence setting in, with killings driven by revenge and fear – a pattern Burundians are all too familiar with. A climate of impunity has been established, which can only lay the ground for more violations and atrocities.

As in neighbouring Democratic Republic of Congo, the Burundi government is the result of a power-sharing agreement to end a civil war, enshrined in the 2000 peace deal struck in Arusha. The relative peace that the country has enjoyed since then is a result of this accord, which guarantees the Tutsi minority a significant place in the country’s institutions. Yet Crisis Group research has found that regime hardliners increasingly portray opposition as a Tutsi conspiracy to grab more power, and call for the compromises of Arusha to be undone. They mistakenly believe that through ever greater repression they can dismantle the political aspects of the peace deal, but keep the peace.

A national debate on how to adapt the Arusha peace deal to changing times would be perfectly legitimate (if freedom of expression could be ensured). But unilaterally dismantling the gains of the last fifteen years through demagogical rhetoric is inflammatory. Burundi’s international partners, who invested so heavily in the peace process, should be bold enough to say so.

Four pressure points for the AU and other international partners

The Burundian government has already shown its determination to continue its repressive course in the face of international outcry. To stop the spiral of violence and bring about the changes needed, the AU High-level Delegation, as well as Burundi’s international partners, should use leverage in four key areas.

International pressure on Burundi has been inadequate, and attempts at mediation since the start of the crisis, have been fragmented and faltering. The government has been able to play one institution off another. It is therefore vital that the AU, the East African Community and the UN speak with one voice. Whoever plays the role of lead international mediator needs to have the full backing of all three organisations, devote considerable energy to the task, and be willing to pass tough messages to the government and the opposition.

Like the diplomatic effort, sanctions on Burundi have been uncoordinated and half-hearted. In particular, the AU, which has the greatest leverage given that regime and opposition leaders travel and have assets in the region, has delayed implementing the decision taken by its Peace and Security Council (PSC) in the communiqué of 17 October 2015 to impose targeted sanctions in the hope the situation would improve. Despite the government’s efforts to appear in full control, it is not. The AU should therefore revisit individual sanctions against those blocking negotiation or inciting violence – government and opposition alike. International partners should also find creative ways of shutting down the illicit economy controlled by hardliners and probably used to pay the Imbonerakure militia that has grown up around the country.

Burundi’s civil war in the 1990s was brought to an end only after strong pressure from African countries on the belligerent parties, including an exceptionally tough sanctions regime. Prompt action in a similar vein could help avoid prolonged pain this time. Sanctions must be clearly benchmarked against reducing violence, ending impunity and starting dialogue.

The recent announcement that the small contingent of AU observers in Burundi will be increased is welcome. But it should be only a beginning. More observers are needed, at least the proposed 100 envisaged by the AUPSC in its 17 October 2015 communiqué. They should be fully empowered to travel freely and monitor events, which should help discourage violence and abuse of power. It is vital that they provide a clearer picture than is currently available of levels of, and responsibilities for, violence by regime supporters and opposition, in order to better inform international positions. A commitment to peaceful resolution necessitates welcoming the observers and facilitating their work. They should report fully to their superiors in Addis Ababa and the public should be made aware of their primary findings.

The option of a UN police component, considered by some UN Security Council members, should remain on the table. Collectively, the AU and UN must make clear that if violence escalates, they will be prepared for a rapid intervention of some form to stem the bloodletting.

In addition, the AU and UN should put in place robust monitoring in refugee camps in neighbouring countries, where reportedly most recruitment is taking place. Rwanda is alleged to be backing the armed opposition according to a recently leaked UN Group of Experts Report, as well as other research. The Rwandan government denies this, but is concerned about Tutsis being targeted in Burundi.

Burundi’s army makes a significant contribution to the AU’s peacekeeping mission in Somalia (AMISOM) and also contributes to the UN mission in the Central African Republic (MINUSCA). Funds for these missions are paid directly to the government, which takes a large share before paying its soldiers. This money provides a vital lifeline to the regime enabling it to resist international pressure – including from the organisations paying its troops. Crisis Group research indicates that the government is rewarding Imbonerakure militia for their participation in violent acts with posts in the police and even the army. The risk of them being further rewarded with much prized spots in AMISOM is apparent, reinforcing the need for effective vetting prior to deployment.

This situation, in which donors are funding the government as it restructures the security forces around its loyalist militia, is unsustainable. Preparations should be made immediately for the gradual and controlled withdrawal of Burundian military contingents from all AU and UN peacekeeping operations. To avoid leaving the mission in Somalia without sufficient forces, serious effort is needed to find other troop contributors. AU staff should also conduct a thorough review of the risks for stability in Burundi as a result of the repatriation of these AMISOM soldiers, which in any case should be gradual. The credibility of such efforts will be vital to ensure that the government gets the message – move to real dialogue, or have your last major source of licit funding cut off. DM

Photo: A Burundian soldier walks infront of residents during a demonstration against the Rwandan government in Burundi’s capital Bujumbura, February 20, 2016. REUTERS/Evrard Ngendakumana.