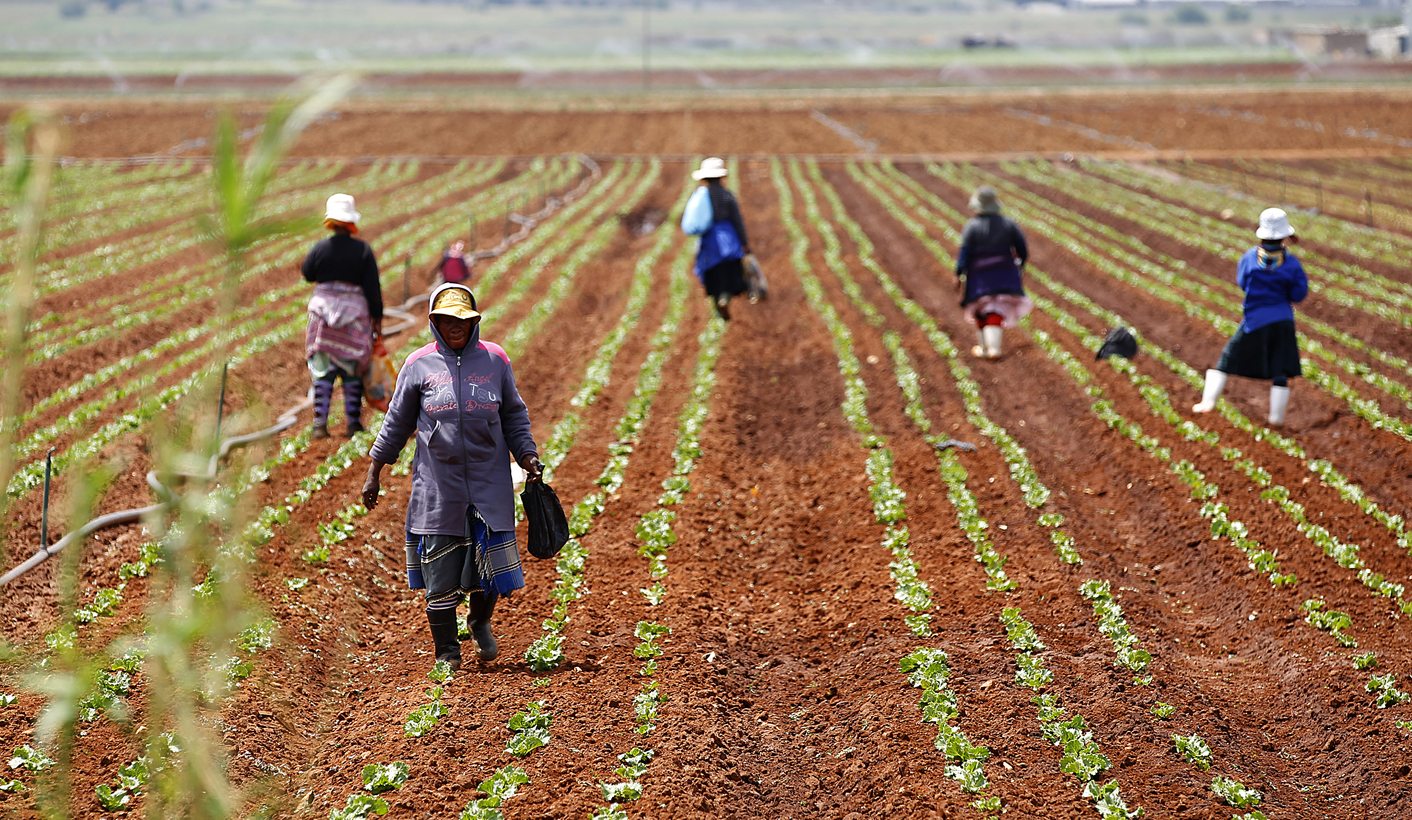 No liberation is complete until the land question is resolved. But even civil society efforts to deal with the problem have stalled in recent years, which is why the new leadership at the Association for Rural Advancement is a welcome breath of fresh air. By YVES VANDERHAEGHEN.

Land reform is in chaos and that makes a lot of work for land activists. Just ask the new team at the helm of the Association for Rural Advancement (AFRA), the venerable land rights organisation founded which was founded in 1979 but still finds itself at odds with the state. It’s been six months since they took over, and it’s been “full-pelt, non-stop – and that’s an understatement,” says director Laurel Oettlé. “And she’s still here,” quips her deputy, Glenn Farred.

They’re certainly up against it. Land is littered with more moribund policies and obscure acronyms than there are acres of success. “We haven’t done well on land,” says Oettlé.

By “we” she means both government and activists. This realism doesn’t dampen the enthusiasm from the pair. But after years in the doldrums a resurgent AFRA suggests that the land struggle may be getting a second wind.

Oettlé, 33, brings youth, organisational savvy and an ebullient optimism to her work. Farred, 44, has more battle scars and a shrewd understanding of power and subversion. From different backgrounds, their paths have led them to a shared mission.

Land has been an enduring interest for Oettlé and the time was right “to get more engaged with the bigger picture as an activist”. For this, AFRA has a special appeal. “AFRA has always meant a great deal to me,” she says. “It has a rich history and it’s done incredibly important work.” The lure is personal, because some of the work was done by her late mother, Tessa Cousins, whose legacy still resonates in the land sector.

Farred, by contrast, had imagined a life in the union movement. “It was supposed to be simple,” he says. “Join the unions, be happy.” Instead, he took a detour into rural development, followed by a stint in the unions, before dedicating himself to development and rights issues. But with time he found himself getting “more and more distanced from real lives and direct engagement”.

As Programme Manager for the Poverty and Development Programme of the SADC Council of NGOs, he was out of South Africa, and increasingly ensnared by red tape and hollow politics. “It was painful to sit outside the country and see what was going on here. I wanted to come home. I wanted to get my hands dirty,” he says. AFRA offered a way of doing that.

The pair’s optimism is remarkable, given the devastation wrought on NGOs by changing times and the throttling of funds and the wreckage of land reform policies crafted with such rigour and hope in the heady 1990s.

The NGO sector says Farred, has been a “trainwreck”, characterised by organisational collapse and closures and leading to a perpetual cycle of crisis and hamster-wheeling to meet donor objectives. Unflinchingly, he says that NGOs have been “susceptible to vision and mission creep.” They also had an absence of clear strategies and a lack of “political conscience” which has made them “captive to state and external sources”. The result has been that many NGOs have succumbed to operating only in what he calls the “invited spaces of power”, like conferences, where engagement is by PowerPoint. This is, he argues, the domain of preconceived solutions, where “connecting with the real is artificial”.

Oettlé grants that “people said we were crazy” for taking on the challenge. “But watch us,” says the adrenalin junkie who’s finished the Dusi Canoe marathon five times, the Fish River nine times, and who has represented South Africa at Canoe Polo and White-Water Rafting. “It’s a lovely time to come into AFRA”, she says, without irony. Some had written the organisation’s obituary last year as it struggled to find direction and funding. But both have been taken care of now.

So the past months have been a period of “figuring out who we are, where we’re heading and getting back to basics”, and “rebuilding from all the superb work that AFRA has been doing, but which has been hidden from view”.

AFRA has now pared down its focus to dealing exclusively with people on farms, leaving alone the range of other issues it had formerly taken on. The effect has been immediate. Emerging from having become virtually invisible, AFRA has dramatically regained national prominence by driving what is already a precedent-setting class-action case in the Land Claims Court to force the Department of Rural Development and Land Reform to act on about 20,000 labour tenant claims that have been languishing for 15 years.

Farred explained why labour tenants are such an important group, politically, symbolically and “on the ground”.

“By hook or by crook they avoided the full-scale lunacy of Apartheid. They clung to the land with tenacity. Their very persistence forced the state to accommodate them and all efforts to reduce them to migrant workers failed. That’s admirable.” It’s for this reason, he says, that “it is a double tragedy that they have been failed by the democratic state. There’s a societal debt that needs to be paid. If we are to remake rural dynamics, this is important.”

Oettlé notes that it’s a delicate task: “Power dynamics on white farms differ from all others, for example in tribal areas.” “So,” adds Farred, “what if the master-servant relation is terminated and tenants now become neighbours? Can we change the power dynamics in a way that they can be fully protected?”

That is why, says Oettlé, to change these dynamics, “security of tenure is so important, because it means that people don’t have to negotiate their right to be where they are every day, at every step”, on top of trying to make a living and staying alive. “Our job is to open a door so that people can explore different ways of living, different spaces, depending on what’s available. People need multiple livelihood strategies, and this varies hugely for each community.”

Her new realism signals how fundamental the shift in philosophy has been. “There’s been an over-concentration on crafting alternatives,” says Farred. “It’s all in people’s heads. The land sector lost it because of an overburdening of expectations,” he says. “By NGOs miscalculating the follow-through of the state”. NGOs, he says, have also had their “moment of culpability” in how they approached issues and in being naïve about direct and unintended consequences. The state, he argues, “blames NGOs for overreaching, for not being a good ally, and for contributing to laws the state deems unworkable. These policies also unleashed a backlash from landowners who were set on breaking those policies.”

And as the state has tried to shift its policies to be more accommodating to power brokers in business and agriculture, “we now have policy by Ministerial Daydream”, says Farred. “There’s been a slide into real arbitrary, random, bad policy. Laws are not being implemented, and the mess is compounded by making up new laws and policies. We need the state to stop making things up,” he says.

“Yes”, agrees Oettlé, “government should just implement the laws it has.” She cites the proposed amendments to the Extension of Security of Tenure Act as a waste of time: “Don’t amend, just implement.” And then there’s the reopening of restitution claims “for the good of chiefs”, when existing claims have not been settled and the new policy “will swallow up all budgets into the future”. Budgets which aren’t there. “Every year the budget for land reform shrinks.”

Budgets aside, the government’s policy vision has changed. Initially, “when we talked about people going back to the land, it was ‘small land’,” says Oettlé. “Now”, she says, “government means big commercial land. The two don’t co-exist. Government vision will only ever put land in the hands of a few, and they won’t be the poor. Government prioritisation contradicts, for example, the Labour Tenants Act,” which is why AFRA has gone to court to hold government to its own laws.

Given that budget cuts to land reform and the department suggest that government has downgraded land, why is it still such a powerful issue?

Farred answers: “It’s a signifier of inequality. It is not-so-subtle code for race. The essential liberation narrative is not just that there was political subjugation; but that people were forced off their land. Land is interwoven with culture and being and self-determination. So land-race-inequality forms a vicious circle, and we have to break it.”

The stakes are high, and that’s why the final outcome of their class-action case, which is due next month, is so important. “We can’t blow this,” say Farred and Oettlé, in unison.

But for now, says Farred in conclusion, “We must just stay calm.” DM

Main photo: Farm workers stand in a field at a farm in Klippoortie, east of Johannesburg November 21, 2012. REUTERS/Siphiwe Sibeko