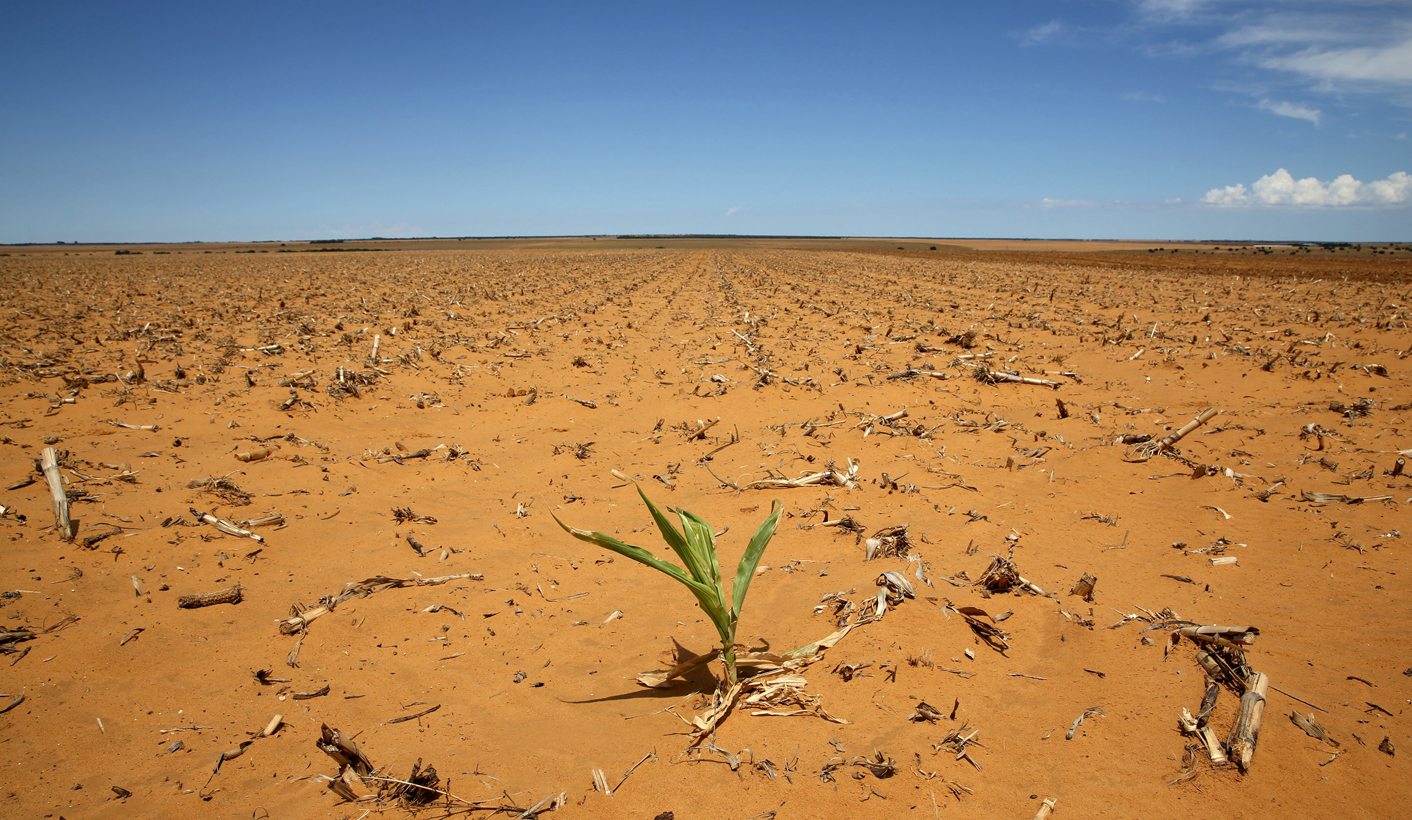 The AgriSA Drought Report was presented at the Cape Town Press Club on Monday. It is relatively straightforward and mindful of government’s cash-flow problems in this deeply troubled economic environment. It is also fully cognisant of a looming food crisis, related in no small part to food inflation expected to hit hard from August 2016, when stocks have run out and livestock farmers sold off whatever animal they could. August 2016 is also the time farmers’ loans are due. By MARIANNE MERTEN.

‘n Boer maak ‘n plan’ as the saying goes. At a drought relief “Manna vir die boere” fundraising concert in Pretoria, bakkies were subsidised to transport fodder from farmers with bales to spare to those without, boreholes were drilled and lawn-cuttings in urban areas picked up for drying and distribution to starving livestock in rural areas.

South Africans’ goodwill has raised around R10 million for drought relief for both commercial and emerging farmers, according to AgriSA. But billions of Rands – R12.5 billion, including R4 billion in government guarantees, – are needed over three years, a mild mid-range estimate – for farmers, particularly those who produce South Africa’s staple food mielies.

AgriSA and other agricultural and farmers’ organisations, will watch Wednesday’s Budget closely to see if Finance Minister Pravin Gordhan has taken on board the drought task team’s proposals. The team represents organised agriculture like AgriSA, African Farmers Association of SA (Afasa) and Grain SA, associated statutory structures like the Land Bank and Industrial Development Corporation (IDC) and AgBiz, which represents agricultural financiers, alongside the agriculture department. The team has briefed Gordhan, his agriculture counterpart Senzeni Zokwana and President Jacob Zuma at a recent workshop. There were other meetings with Gordhan. Daily Maverick has learnt deputy president Cyril Ramaphosa, who chairs plenty of cabinet’s inter-ministerial turnaround committees, was also briefed.

The plan, as presented to the Cape Town Press Club on Monday, is relatively straightforward and mindful of government’s cash-flow problems in this deeply troubled economic environment. It is also fully cognisant of a looming food crisis, related in no small part to food inflation expected to hit hard from August 2016, when stocks have run out and livestock farmers sold off whatever animal they could. August 2016 is also the time farmers’ loans are due.

Point One: Farmers need state guarantees, estimated at R4 billion in an average (and much more in a worst case scenario), so loans can be extended to ensure food production capacity is maintained. The impact of the drought will be felt until 2019. For emerging farmers, the state should guarantee up to 90% of loans; for commercial farmers 80%. It would be a case of pinpointing “deserving” farmers, or those commercial or emerging farmers with a solid chance of recovery.

Point Two: Government should pay farmworkers a R1,000 monthly subsidy until the end of February 2017 to ensure job security in the agricultural sector which employs 850,000 permanent and seasonal workers. Many drought-struck farmers may have no option but to lay off workers, whose migration to nearby dorpies may heighten socio-economic pressures already felt there.

There are other suggestions: lifting food import restrictions, deploying the South African National Defense Force (SANDF) to assist in humanitarian relief and channelling any funds to farmers via the Land Bank. The proposals do not cover where and how government may assist in contributing to the estimated R14 billion needed to import of the required 3.8 million tons of mielies.

And so Gordhan faces a Gordian knot. Will the productive agricultural sector receive R4 billion in government guarantees for farmers? Or will the troubled national airline SAA get the R5 billion guarantees it requested even if it is already technically insolvent, as Business Day has previously reported, and should not trade. Never mind any of the other pressures on the national coffers – and with the upcoming municipal poll, politicians no doubt are keenly aware of citizens’ positivity towards social grants, which several surveys have identified as one area of government delivery. A sale of state non-core assets may come in handy. Last year government sold off its stake in Vodacom to raise a R23 billion bail-out package for troubled power utility Eskom.

“It is clear that this is a national disaster. It is important we channel our resources,” said AgriSA executive director Omri van Zyl. The proposed measures are a minimum aimed at returning South African farmers to their current position in three years’ time, or 2019, when it is expected the impact of the drought would have run its course. Farmers need time to rebuild, he added.

To date government has resisted declaring a national disaster, and instead has re-prioritized unspent funds from, particularly, the water and sanitation department funds. Declaring a national disaster sets in motion a series of actions to release monies from the contingency fund, maintained exactly for unforeseen emergencies. According to the Medium-term Budget Policy Statement (MTBPS) of October 2015, the contingency reserves were depleted in the 2015/16 financial year ending March 31 as public servants received a 10.1% increase in their salary packages.

The average rainfall for 2015 was 400 millimetres, two-thirds of the usual average of 600mm, according to the South African Weather Service. Dams are half full on average across the country. Like farmers, rural communities and those living in the many dorpies speckled across the countryside battle on. If the whispers hold any truth, the dropping water levels are exposing the cracks of the country’s water infrastructure.

As the drought bites, AgriSA president Möller cautions it is the tale of South Africa’s food security:

“The drought is not the story of the farmers, either emerging or commercial. It is about farm workers, the total rural population.” DM

Photo: A maize plant is seen at a field in Hoopstad, a maize-producing district in the Free State province, South Africa, January 13, 2016. REUTERS/Siphiwe Sibeko