Ground-Up: Where do Western Cape universities stand on outsourcing? 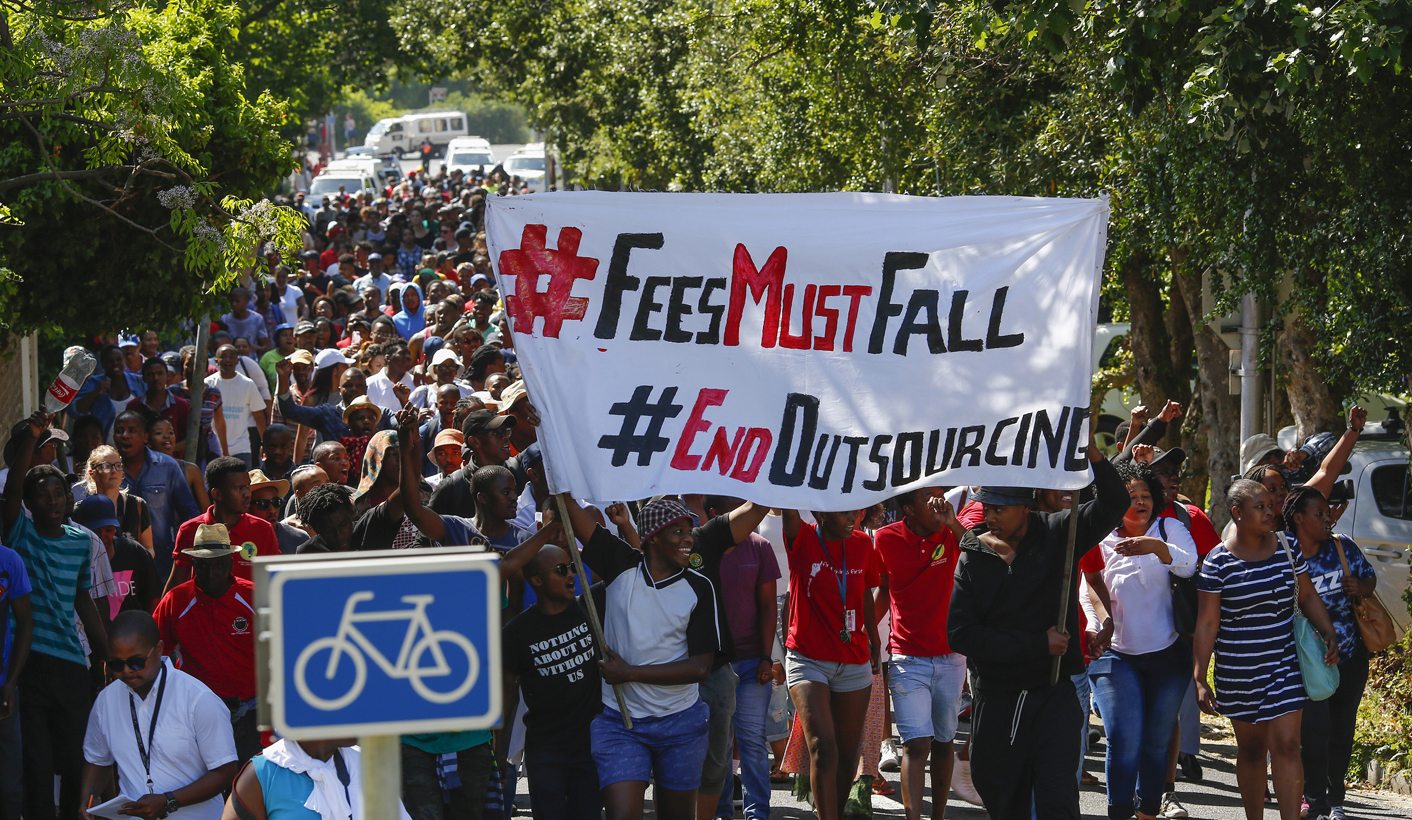 For many years workers at universities have been struggling to end outsourcing to private companies. Outsourced workers, which include cleaners, catering staff, garden services and security guards, are usually paid less than if they worked directly for the university and work under more difficult conditions.

The fight against outsourcing intensified when thousands joined the #FeesMustFall student movement protests that erupted at universities across the country in October last year. Among the students’ demands was a call to reintroduce insourcing at campuses.

Nearly four months later, the #OutsourcingMustFall movement, which is supported by the #FeesMustFall collective, is gaining support among students and workers. But management at most universities in the Western Cape say they are still considering the financial implications of employing these workers.

University of the Western Cape (UWC)

Yesterday (22 February), more than 50 cleaning and garden services workers protested outside UWC’s administrations offices. The group are demanding that all of the grounds, cleaning and security staff be employed by the University by 1 April.

Ndiki Nonkumbuzo has been working as a cleaner at UWC for more than ten years. She is also a second year engineering student at Northlink college.

“Our contracts end in March and we want to be employed by UWC. We earn R2,700 a month and only get provident fund and UIF. I can’t even afford to pay for my studies,” she said.

Another cleaner, who asked not to be named as she feared being targeted, works for Prestige. She said: “I’ve worked for this place so long but my own child can’t go to university. We don’t have any benefits. The other staff’s children come to this university. It’s not right.”

In response, UWC spokesman, Luthando Tyhalibongo, said that the university is still considering the costs. “There are 447 grounds, cleaning and security staff. The University has assisted the outsourced staff since December 2015. UWC Council accepts that the socioeconomic conditions of outsourced staff are unacceptable and contribute to increased inequities,” he said.

Tyhalibongo said the outsourced staff have been getting a R2,000 monthly allowance since 1 December last year.

“Outsourced staff will also have access to the same study rebates as for permanent staff for themselves and their children. We will also engage the companies about improving the employment conditions of the staff,” he said.

“We will continue to look at the long-term impact of insourcing in the context of the University’s financial sustainability and to explore possible alternatives such as worker co-operatives,” he said.

Yesterday, a group of students and staff marched to Stellenbosch University’s administration office over the “unfair” dismissal of more than 140 workers after the violent protests last year.

They were employed by Group4Securicor and Langverwacht Landscaping and earned around R2,700 a month.

In a statement, the group representing the workers said that Stellenbosch management was using their “outsourced status” as an excuse not to provide them with the same benefits as permanent staff such as medical aid and housing allowance.

According to a recent statement, Stellenbosch University spokesman Martin Viljoen said: “Vice Chancellor Professor Wim de Villiers made a formal appeal for leniency to external service providers who instituted disciplinary action against workers who participated in the protest action.”

“We reached an agreement with service workers and students at the end of 2015. We have since agreed to place an immediate moratorium on all new forms of outsourcing,” he said.

Viljoen said that a “once-off” payment of R2,000 was given to all outsourced workers and those affected by the protests.

“We pledged a subsidy of the cost-to-company of the ring-fenced external workers who currently earn less than R5,000 a month, as from March. We also established an independent helpline where workers can lodge any complaints,” he said.

The university has also established a task team to make sure the agreement between management and workers is implemented.

The first workers are expected to sign their new employment contracts by June.

UCT spokesman Aziwe Mufamandi, said: “Reintroducing insourcing of specific services at the University will be a complex process, and we are currently involved in the negotiation stages.”

When asked about the University’s policy around outsourced workers, CPUT spokesperson Lauren Kansley said: “Vice-Chancellor Dr Prins Nevhutalu is spearheading a Management Committee Task Team to investigate various models for insourcing/outsourcing. The different options will be tabled at our next council meeting in March for consideration.” DM