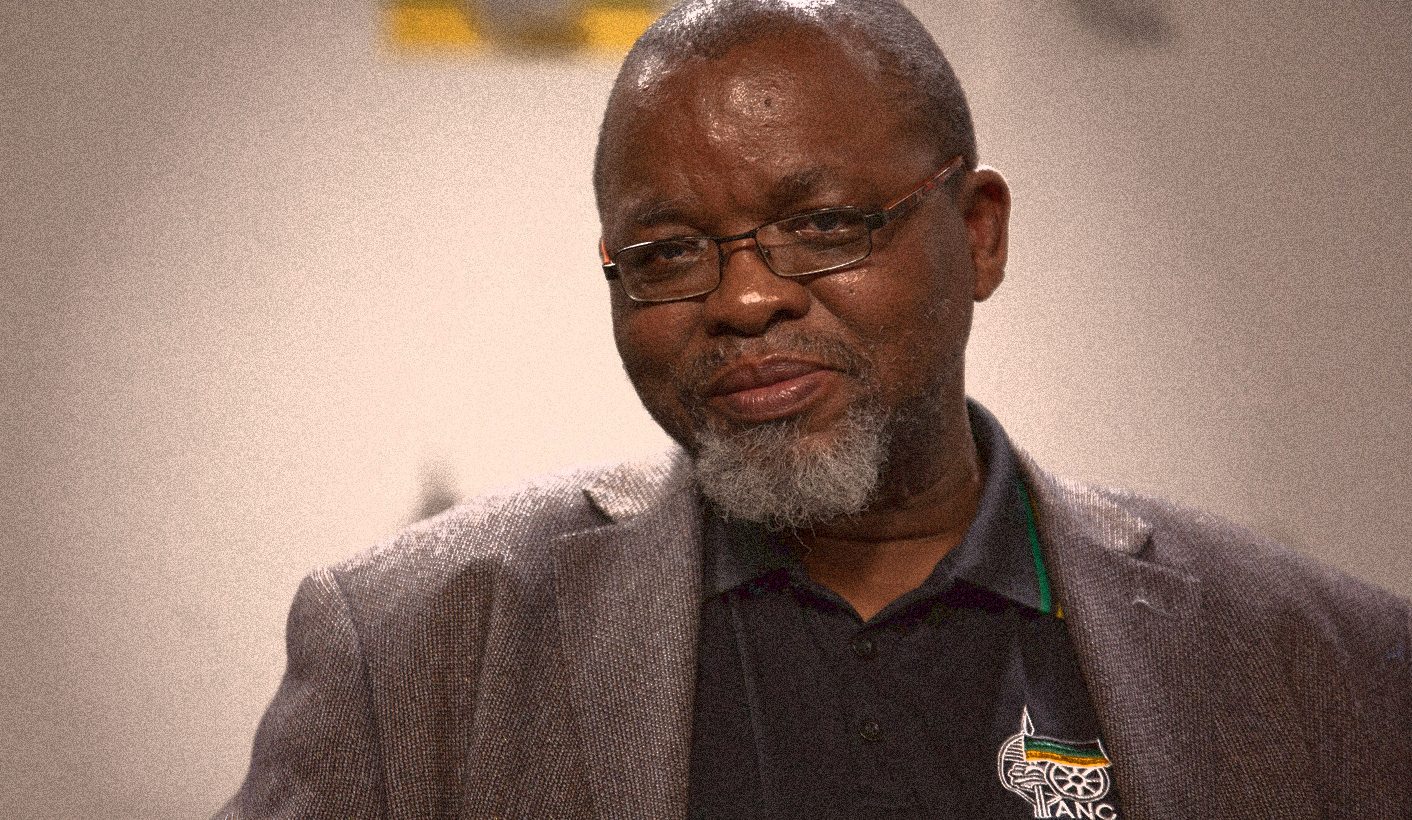 Last week Friday, the African National Congress marched against racism and they handed over a memorandum that was essentially from themselves to themselves, calling on themselves to prevent themselves and other selves from doing such things to all their selves.

Around the climax of this curiously omphaloskeptic endeavour, the party’s secretary general, none other than Gwede Mantashe, rose to inform the crowd about how best to combat racism.

His remarks may well have conveyed useful ideas needed to wipe away the scourge of racism (and by no means should anyone attempt to minimize the importance of dealing with any such deep-seated behaviour or to underplay its lasting social or economic effects on contemporary South African life). However, from that speech, what especially caught the SA media’s attention was his idiosyncratic interpretation of a troubling thread in contemporary US-South African relations. Well, okay, this wasn’t a totally unique interpretation. In fact, it was pretty much in line with how significant numbers of South Africans believe the world works.

In essence, the Mantashe-ian logic was that his party, having achieved the nation’s liberation and, subsequently, gained a persistent majority in every election since that time, stands as the only effective guardian against racist backsliding – and even the possibility of the re-imposition of a apartheid-style political life. In contrast to their efforts, all those other political parties wandering about are either the very forces of that backsliding or – even worse – represent the forces of chaos that would destroy the progress made up to the present.

But, if the secretary general’s worldview is to be appreciated fully, standing in the wings, in some particularly threatening, dangerous shadows, stands, who else, but the United States, now apparently bent on “regime change” in South Africa. The mechanism of this campaign is one of the US government’s official exchange programs. As Mantashe is reported to have said, “As we mobilise our people, we must say, be vigilant. You must see through anarchy and people who are out there in a programme of regime change.

“We are aware of the meetings taking place regularly in the American embassy. These meetings in the embassy are about nothing else other than mobilization for regime change. We’re aware of a programme that takes young people to the United States for six weeks, brings them back and plants them everywhere in the campuses and everywhere.” Mantashe also linked this activity to the various non-violent, so-called ‘colour revolutions’ in the past several years. These movements gained their common label because of the way activists in whichever country have fastened upon a particular hue to represent their ideals and activism for greater democratic freedoms, such as Ukraine’s orange revolution.

Now, if the secretary-general’s thoughts are taken seriously, the particularly subversive program under his baleful gaze is the Mandela-Washington Fellows program, the local name for the Young African Leader Initiative, launched several years back as part of the Obama administration’s recognition that Africa is a particularly young continent demographically. Consequently, an important locus of social, economic and political evolution on the continent must come from among the ranks of younger professionals, business leaders and academics that no longer slavishly are willing to accept the tired old habits of so many African leaders who usually fall back on authoritarianism and corruption.

Or, as the program’s website explains: “The Obama Administration’s Young African Leaders Initiative (YALI) is a long-term effort to invest in the next generation of African leaders and strengthen partnerships between the United States and Africa. This wide-ranging effort has been led by the White House and the U.S. Department of State, in partnership with the U.S. Agency for International Development (USAID) and the Peace Corps.

“The next phase of YALI will develop a prestigious network of leaders across critical sectors, cement stronger ties to the United States, and offer follow-on leadership opportunities in Africa, with the goal of strengthening democratic institutions and spurring economic growth. The Department of State has supported the Initiative through a series of high-profile forums with youth leaders including the President’s Young African Leaders Forum (August 2010), First Lady’s Young African Women Leaders Forum (June 2011), and Young African Leaders Innovation Summit and Mentoring Partnership (2012) in addition to more than 2,000 subsequent youth programs in sub-Saharan Africa.”

These overall goals were similarly built into many different programs that were crucial in maintaining ties between the US Embassy/America and South Africans working for a democratic, non-racial society back in the bad old days. Back then, hundreds of people participated in such programs in the 1970s-80s and 90s – including many still actively engaged in South Africa’s political, social, academic, media and economic life.

One recipient of such grants, Ismail Mahomed, now artistic director of the National Arts Festival in Grahamstown, wrote in response, after he had read Mantashe’s remarks, “Like all the young participants in the Mandela-Washington Fellowship, I too was a beneficiary of a US Embassy exchanges programme (the International Visitors Leadership Programme — IVLP). I spent six weeks in the US, meeting with professional counterparts to pursue my interest in arts management.

“If one has to look at the exchanges alumni list one will be blown away by the number of South Africans who are making a positive difference to South African society because they have been beneficiaries of such programmes. Participants in the Mandela-Washington Fellowship are young South Africans who inspire hope.”

Queried about the specifics of a program the ANC secretary general is now, suddenly, deeply concerned about, the American Embassy noted, “In 2013, right here in South Africa, President Obama announced the ‘Washington Fellowship for Young African Leaders.’ In 2014, 46 young South Africans took part in the Fellowship, which was renamed the Mandela Washington Fellowship. In 2015 another 40 South Africans took part. This year, we expect even more to participate. They are all extremely qualified candidates in three areas: civic leadership, public management, and business and entrepreneurship.”

And as far as those meetings at the embassy are concerned, it should be noted that these events are partly social, partly networking, and partly opportunities to meet visiting American worthies from various fields and professions. Hardly the stuff of spy novels, espionage, fifth columns and covert regime change. And hardly the kind of bloody shirt to be used to frighten tens of thousands in a rally against racism.

In fact, in one of the tweets American Ambassador Patrick Gaspard sent out in response to the secretary general’s remarks, Gaspard noted he had personally asked Mantashe to recommend individuals from within his party structures for these very same Mandela Washington Fellowships. But perhaps with the pressures of the upcoming local elections on his mind so much these days, maybe Mantashe was unable to recollect that particular conversation before he spoke to the crowd at the Union Buildings last Friday.

The problem is that rhetoric such as Mantashe’s is not particularly uncommon in South Africa, perhaps because a visceral belief in the power and ubiquitousness of political conspiracies remains strong within both the ANC and its alliance partner, the SACP. Maybe this is in recognition of the impact of various conspiracies in South African history – and within the history of their movements. The leadership in those two parties, over the years, has often seemed worried about the possibilities sleeper “apartheid agents” were left hiding in government offices and that they were there to undermine the legitimacy of ANC rule. Certainly comments about third forces come out frequently in South African political discourse, a harking back to real efforts by the previous regime to disrupt the liberation struggle and create serious conflict within it in the waning days of the apartheid regime.

A significant amount of this feeling is directed towards the US, either subliminally or, sometimes, more overtly. Much still is made of President Ronald Reagan’s constructive engagement policy and his opposition to sanctions back in the 1980s. And, of course, former President Thabo Mbeki often seemed convinced the American anti-HIV/AIDS assistance program, PEPFAR, was an American conspiracy to create huge profits for American pharmaceutical companies on the backs of hapless, sick South Africans. And some in government circles assumed the US Department of Justice/FBI’s relationship with the Scorpions was interwoven into plots against various domestic political enemies. Then, too, there was that rather prominent cabinet minister who, some years back, publicly argued a key justification for the arms deal’s submarines was to ensure South Africa could fend off an American amphibious assault on the isolated East Cape sea coast.

More generally, with a mind-set already primed to see evidence of conspiracies, it can be relatively easy to find the trail. American-supported efforts to build up civil society in Africa, via grants from the US government-funded National Endowment for Democracy, with the assistance of various private philanthropies and NGOs, and even in the work of international NGO activists such as Srdja Popovic (head of the Centre for Applied Nonviolent Action and Strategies) can all be seen as consistent with the goals of regime change throughout Africa (a view no doubt nourished as well from the American invasion of Iraq and bombing campaign against Libya’s Muammar Gaddafi .)

Still, at least some of this wilder talk is not totally out of any deep conviction or from the weltanschauung on the part of those who preach it. Pretty much everywhere in the world, and South Africa is no exception, decrying the efforts of groups who are the cat’s paw of the CIA is usually good for a quick cheer from the crowd. Curiously, this operates pretty much along the lines of that red meat, dog whistle rhetoric so beloved of the looney right in American politics, even if the punch lines and villains are very different.

This may become increasingly difficult in future, however, if political fortune seems to be moving against the ANC and its current leader even further than at present, going into those upcoming local elections. Then, supporters of the party and Jacob Zuma may well see further, new opportunities to decry programs like the Mandela Washington Fellows – and to look for ways to tie such programs to the ANC’s political opponents in the 2016 election. Could be a difficult season, this one. DM