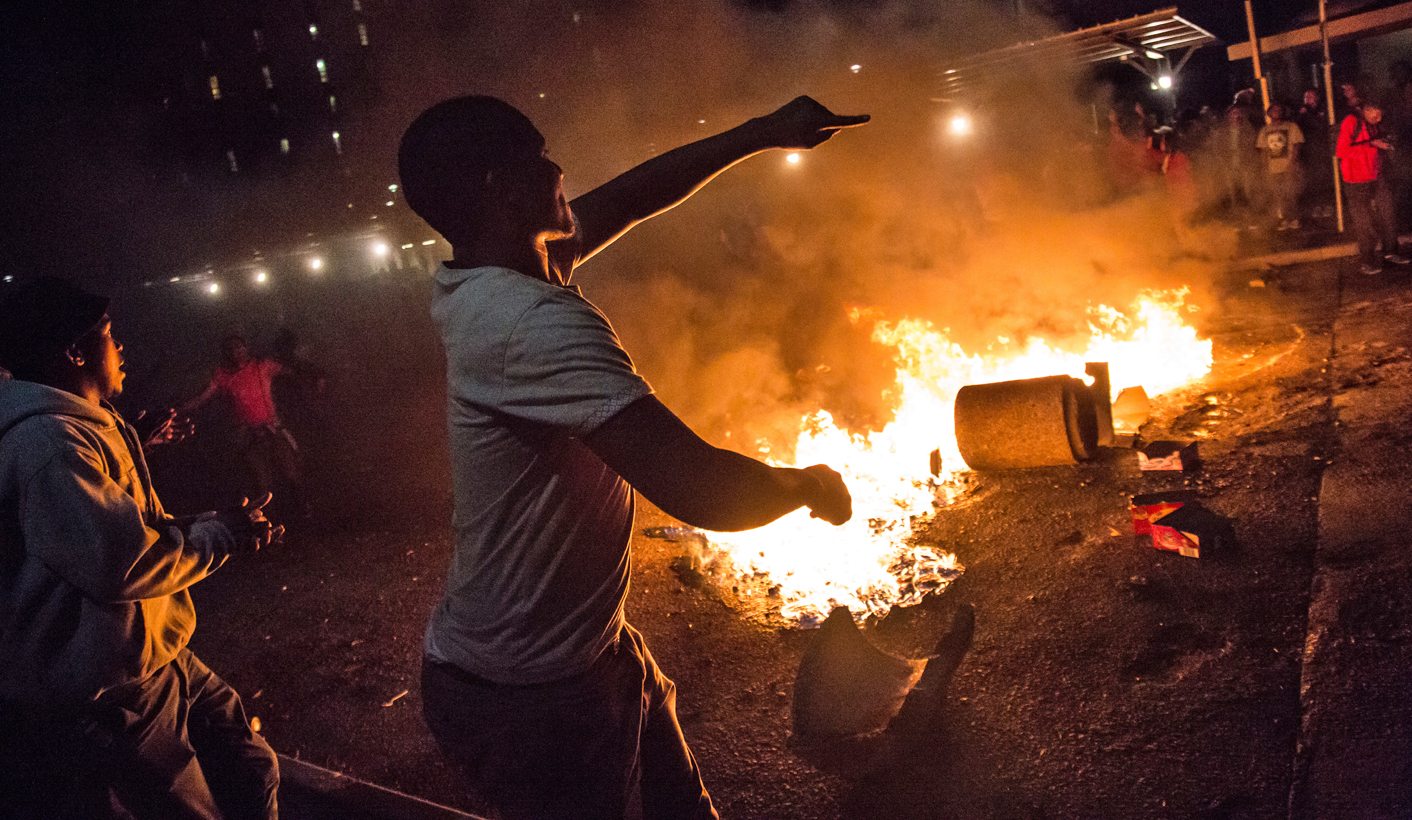 In some cases, the decision to use violence is taken after long deliberation and thought. The case of the ANC turning to ‘the armed struggle’ is one such case in point. It took a long time for this momentous decision to be taken and the implications and consequences were carefully considered. In the case of campus violence, most explanations sound as though they have been made up after the event. There is no evidence of careful consideration, or discussion, never mind any thought for the consequences of the course of action taken. By ROBERT MORELL.

Since the days of Black Panther and Eldridge Cleaver, progressive and radical movements have sought to bolster their cause by demanding ‘are you with us or are you against us? It is not irrelevant that Cleaver admitted to being a serial rapist, and advocated violence to obtain his political ends.

Often the problem/solution approach has been effective in gaining support and encouraging people to think about their own positions in helpful and constructive ways. But this question also has the danger of polarization and over-simplification. Political situations are neither simple nor are choices easy. Certainly they cannot be reduced constructively to a yes or no answer.

The climate on South African university campuses in the last year has frequently been reduced to this question as movements like #RhodesMustFall (RMF) and #FeesMustFall have sought to attract followers to pursue their goals.

At UCT, the campus community has been asked this question since March 2015 when #RhodesMustFall first burst onto the political stage. The movement succeeded in energizing the campus, raising issues and forcing the removal of the statue of Rhodes. But since that removal there have been growing concerns about RMF.

It has exhibited high levels of intolerance and used intimidation. It refuses to take any responsibility for actions committed in its name, claiming that it is a mass-based movement that has supporters, but no members and no leaders. In a recent interview in the Sunday Times (21 February 2016) a representative of RMF Simon Rakei clearly indicates an intransigent approach that opposes dialogue.

The result is that polarization and conflict are fueled. There is no commitment to working to build a better university that reflects a post-apartheid vision for a new South Africa.

Last week fears about RMF were confirmed when people acting in its name fire-bombed the Vice Chancellor’s Office, a bus and a university vehicle, burnt artworks (including those by Keresemose Richard Baholo). These were unapologetic acts of violence.

It is critical to locate these violent protests in the context of our times. We are not living under Apartheid where authoritarian, undemocratic government ensured a racially unequal society. We live in a constitutional democracy which grants extensive rights of protest, assembly and speech but equally imposes obligations to live in ways that are respectful of the rights of others.

South Africa has a sad history of violence, from colonial times to the present. The colonial wars of expropriation in the 19th century and the more recent history of apartheid repression are well known as examples of the violent nature of the process by which white rule was installed and consolidated.

But this is certainly not the only aspect of violence: In the 1970s Soweto was held to be the murder capital of the world, and in the year 2000 in a survey of 60 countries, the UN Office on Drugs and Crime rated South Africa as having the highest rate of rape and the second highest of murder and assault.

Globally, violence is considered to be a massive problem. Depending on the definition – and there are many, from obvious forms of physical violence to psychological and symbolic violence – it is agreed that it affects all spheres of life, and for the worse. Economists try to calculate the cost of violence. They calculate that in 1999 violent crime exacted a social cost to the continent of Latin America equal to 7.5% of its GDP. Similar figures are not available for Africa.

Of course, not all forms of violence are the same, though there is widespread agreement that some forms are worse than others and that a continuum links forms of violence. Ordinarily interpersonal violence is considered more serious than violence against property, which is why the harshest punishments are often reserved for murder and rape.

So what are the causes of violence? There are many and here I will focus on just three.

Countries with a history of recent war are likely to be more violent than countries that are stable. This is to say that exposure to and experience of violence plays itself out in subsequent generations. In a recent (2013) study of 9 sites across 6 Asian/Pacific countries by Rachel Jewkes and Emma Fulu, it was found that rape rates were much higher in countries that had been involved in war. Bougainville Island in Papua New Guinea had horrific levels of rape and a long history of civil war, followed by Cambodia where the history of Khmer Rouge’s bloody reign in the 1970s continues to be seen in sexual violence figures.

A second reason is found in studies of masculinity. Since it is men who are generally responsible for violence, studies have focused on the motivations of men and particularly on how men understand themselves ‘as men’. Studies of masculinity find that not all men are violent but that some men are exceptionally violent. Such men have often participated in sexual bullying (while at school forcing girls to have sex), ownership of illegal weapons, and gang membership. These men are also more likely to have controlling attitudes towards women and have little support for values of gender equality. It is important to note that men who are very poor generally do not fall into the ‘very violent’ category. It is rather those with access to resources who are multiple perpetrators.

A third reason is the normative social environment. Where violence is widely condemned and held to be inappropriate, there are fewer instances of perpetration. Conversely where, for whatever reason, violence is condoned because nobody speaks against it, levels of violence can be high. A grim example is the 1998 public killing of Gugu Dlamini in KwaZulu-Natal. She announced that she was HIV positive and was beaten and stabbed to death for this disclosure. The climate of stigma made such a public killing ‘legitimate’ even though it was clearly criminal.

Proponents, supporters and defenders of violence invariably seek justification. In two well-known cases, two prominent South Africans, athlete Oscar Pistorius and DJ Donald Sebolai, have both sought to explain their killing of their partners by invoking self-defense. In other cases, political arguments are offered. In current South Africa one of the most convenient is based on a decontextualized reading of Frantz Fanon’s Wretched of the Earth. Alternatively, violence is justified as warranted on contractual grounds, in the case of UCT, RMF claim ‘broken promises’ caused them to resort to violence.

In some cases, the decision to use violence is taken after long deliberation and thought. The case of the ANC turning to ‘the armed struggle’ is one such case in point. It took a long time for this momentous decision to be taken and the implications and consequences were carefully considered.

In the case of campus violence, most explanations sound as though they have been made up after the event. There is no evidence of careful consideration, or discussion, never mind any thought for the consequences of the course of action taken. The infringement of the rights of others, the damage to property and to institutions, and the future state of human relations or impact on higher education are not apparently considered. And there is no heed at all given to the requirement to negotiate in good faith or to the legal requirement, based on South Africa’s inspirational choice of negotiation over violence in the late 1980s and early 1990s, to resolve things non-violently and procedurally.

RMF seems to have forgotten that South Africa has a long and honourable history of peace. It has four Nobel Peace Prize winners, Albert Luthuli, Nelson Mandela, F W de Klerk and Desmond Tutu. Despite the disappointments of the Truth and Reconciliation Commission, South Africa can claim to have pioneered this as an instrument of peace and it has been borrowed by other countries seeking to avoid further violence. South Africa has gained prominence for its use of the National Defence Force in peace-keeping missions on the continent. And despite the tragedy of Marikana, there continues to be a constitutional commitment to seeking resolution through negotiation.

Current campus violence does not follow in the tradition of non-violence and peace. These actions show no promise to contribute to the building of a consensual process that upholds democracy, invites the views of everybody and is bound by frameworks established to ensure that such processes have a fair outcome.

This campus violence rather is an expression of a worrying close-mindedness, a myopia, which refuses to acknowledge any other point of view – not even that of the vast majority of students – and insists on being the only voice that should be heard and heeded. When it fails to persuade its audience, it uses violence.

This has been the way of fascism in the 20th century and of extremist, non-democratic movements in the 21st century.

Campus violence has up to now occurred with virtually no action taken against perpetrators. They have operated with impunity. I cannot speculate about the reasons for the lack of consequence that has attended the perpetration of violence but the widespread sympathy of the media has contributed to the view that students are ‘right’ and that their actions are therefore justified. In this sense, the media are complicit with the perpetration of campus violence because they contribute to a climate that legitimizes it.

South Africa is a constitutional democracy and there are ways of expressing dissent that are legal and, at many universities, encouraged. The choice to use violence contributes to a grim South African tradition of violence. South Africans should condemn its use. By the same token, they should support efforts to keep Universities as spaces where people are free to listen; speak; write; think; learn; imagine; persuade; dissent; study; analyse; reflect. These are radical activities in their own right and they are the right of all South Africans, not just the RMF supporters. DM

Robert Morrell is a scholar of gender and masculinity and works at UCT.

Photo of the UCT fire by Shaun Swingler/Daily Maverick Chronicle.