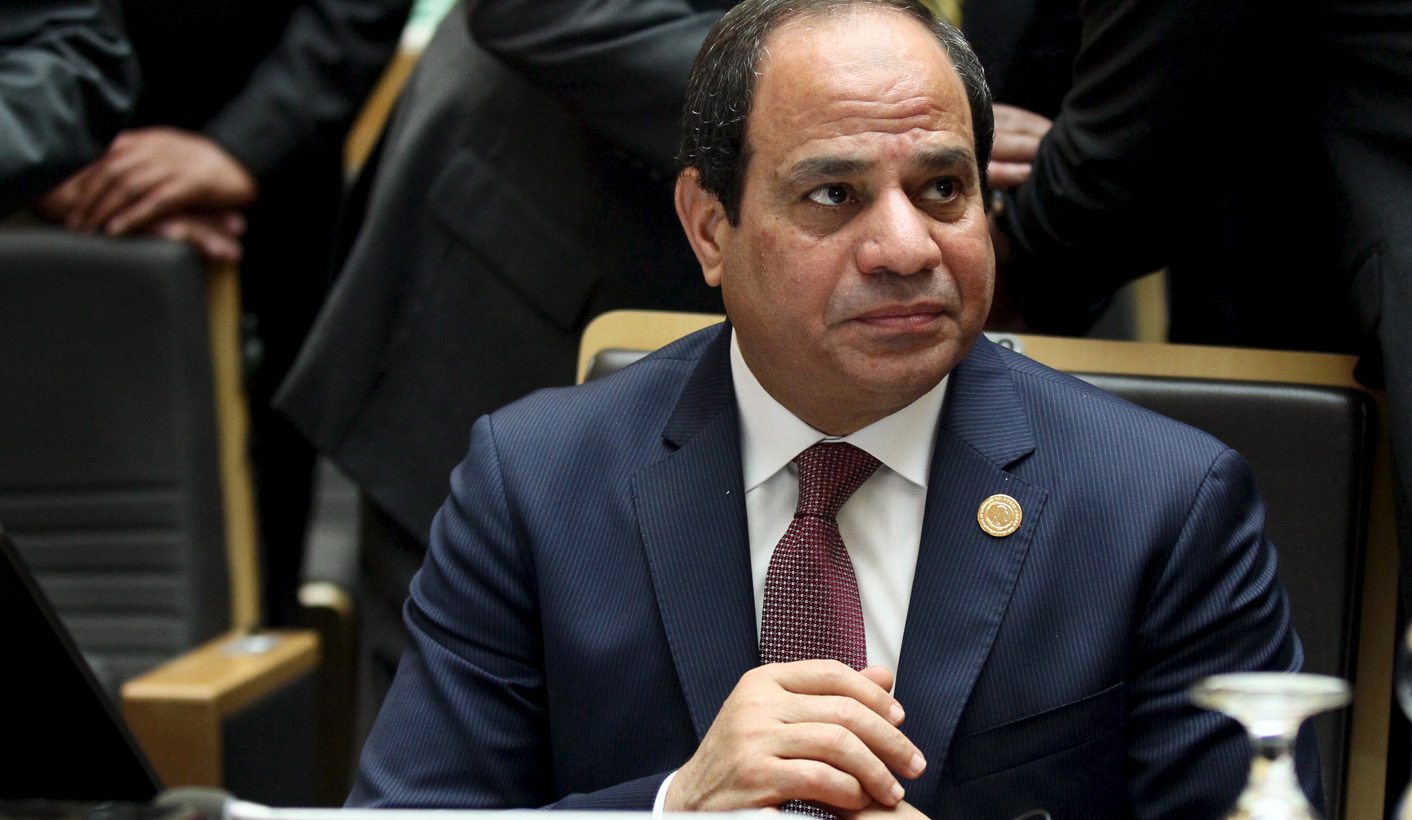 With its economy in trouble, Egypt is aggressively – and expensively – wooing African business. Having long snubbed the continent, favouring its Arab heritage over its geography, Egypt’s leaders are hoping that it’s not too late to get in on the great African gold rush. And while the booze and the macaroons won’t seal the deal, they’ll certainly help. By SIMON ALLISON.

SHARM EL SHEIKH, EGYPT – A portrait of the late Egyptian President Gamal Abdel Nasser hangs in the African Union building in Addis Ababa, alongside other African liberation heroes: Nyerere, Lumumba, Senghor, Nkrumah. Nasser was the father of pan-Arabism, but he was also a committed pan-Africanist. The same can’t be said for his successors.

After Nasser’s death, Egyptians by and large turned their backs on Africa, choosing to emphasise their Middle Eastern tradition instead. Egypt was an Arab, not an African, nation. This attitude manifested itself in various ways; most obviously in the racism that endures today, but also in Egypt’s limited political or economic engagement with the continent.

“You know something, Egypt doesn’t care about its African side. Egyptians say they are Arab, that they are not part of Africa. But this is changing. There is so much opportunity,” said Nevine Abdelkhalek, a Cairo businesswoman. She was speaking on the side lines of the Africa 2016 forum, a lavish government-sponsored jamboree in Sharm el Sheikh held over the weekend of Feb 20th

The conference is designed to persuade Africans that Egypt is ready to engage with the continent again. But it’s hard to escape the feeling that the Egyptians are having to work even harder to persuade themselves that their future really is African.

“We have a lot of catching up to do,” observed Ambassador Hazem Fahmy, head of the Egyptian Agency of Partnership for Development. “This is a start.”

Circumstances have forced Egypt’s hand. First, Egypt’s struggling economy is desperate for new markets and external investment. African countries may be able to provide both. In this context, Egypt is chasing after China, Japan, the USA and India who have all organised similar trade conferences, albeit with far larger pledges and a much better showing of African presidents. (In the end, just five heads of state made it to Egypt, although the program had promised seven).

Second, Ethiopia’s construction of an enormous dam on the Nile River threatens Egypt’s water security, meaning that it finally has to take its southern neighbours a lot more seriously. The dam is a sensitive topic here. Egypt has long enjoyed a virtual monopoly on Nile River water, as guaranteed by a colonial treaty, and its entire agricultural sector depends on unrestricted access. Ethiopia’s dam is therefore an existential threat, in the most literal application of the term, and is being treated as such: politicians in Cairo have repeatedly threatened to go to war over the issue. Fortunately, diplomacy has thusfar prevailed, and it was encouraging to see Egyptian and Ethiopian diplomats talking further at the conference, although technical details for an impact assessment study have yet to be hammered out.

In other words, Egypt doesn’t have much of a choice but to look to Africa once again, which is why the new drive to woo African politicians and businessmen is being led by President Abdel Fattah el-Sisi himself. “He has been flexible and pragmatic. Most important, he has been there, at African summits and engaged with other leaders. That may not raise his profile to the level of Nasser’s, but it may re-establish Egypt’s place on the continent,” wrote the Economist last year.

In his speech on Saturday, Sisi said: “Achieving development, the major challenge that we all face, requires us to develop the mechanisms of joint African action and follow the model of regional integration.”

The lofty rhetoric was reinforced on Sunday, when the Egyptian president made an unscheduled return to the conference venue where he privately addressed a select gathering of some 30 African businessmen, imploring them to look to Egypt for manufacturing and services. It was odd moment – the life-long army man is not a natural salesman – but it underlined the seriousness of Sisi’s intent.

So too did the expense of the lavish event, which must have run into the millions of dollars. The gala dinner alone – sponsored by equity fund Qalaa Holdings – was an extraordinarily extravagant display, with guests treated to a gourmet buffet, vintage wines, a private concert and several entirely decorative towers of macaroons. On the one hand, this was a show of hospitality the likes of which few other African countries can match: edible evidence of Egypt’s refinement. On the other hand, the sheer decadence was discomforting. Such opulence, in what is still a poor country, is surely Marie Antoinette territory.

Not that the hotels hosting the dinners or the 1,500-plus delegates were complaining. They desperately need the business. Sharm el Sheikh was invented for tourists, but the tourists have stopped coming ever since the bombing of a Russian airliner in October last year. Russia alone cancelled up to 14 flights a week. The near-complete absence of swimsuited holidaymakers gives the place an unsettling air of decay: restaurants are empty, shops are shutting down and entire resorts have closed.

Once a jewel of Egypt’s tourist industry, and an enormous money-spinner for government and businesses alike, it is now a ghost town.

For would-be investors in Africa – and for those soliciting that investment – there’s a lesson in this somewhere. Like oil or diamonds, Sharm el Sheikh’s beach is a natural resource that has been neatly packaged for foreign consumption. But this is a capricious, unsustainable model: it took just one unfortunate incident to take the whole area down, destroying the livelihood of thousands. Don’t be fooled by the grandeur of the setting: although the luxury is impressive, Sharm el Sheikh is an example of how not to manage investment in Africa.

Having long ignored its African heritage, Egypt’s beleaguered government now sees giant dollar signs when it looks down south. It’s not wrong: there’s no question that Africa houses the world’s largest untapped markets, and that there is an enormous amount of money to be made. But Egyptian businesses are late to the party, and must convince would-be African partners that they have more to offer than their American, Chinese, European or Indian counterparts. It’s a tough sell, even with all that free-flowing booze and macaroons. DM