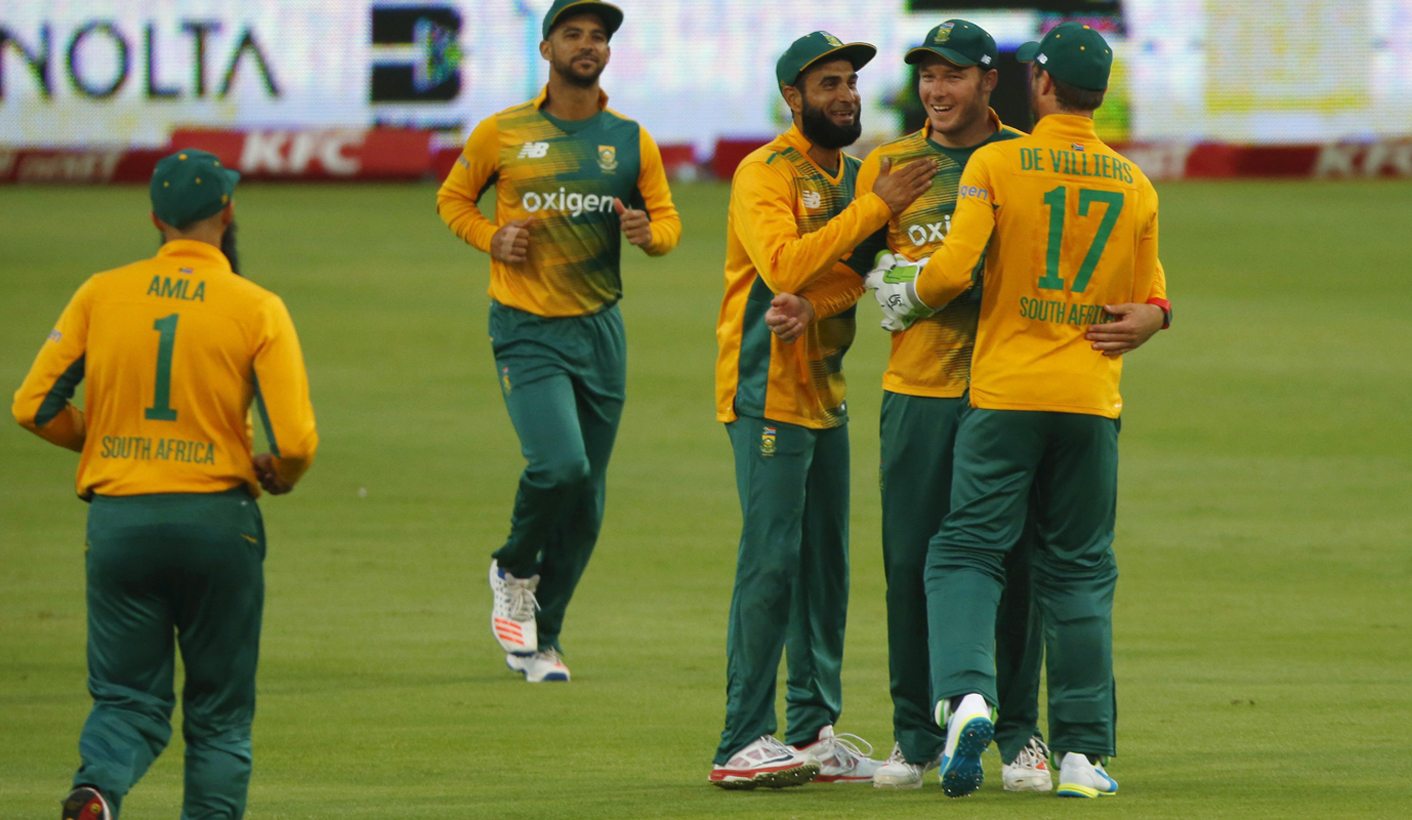 South Africa can breathe easily after winning another limited overs series against England. The woes of the Test series seems eons away, for now, and while they admit there is much to improve on, South Africa’s preparations look well on track for the World T20, beginning in India next month. ANTOINETTE MULLER picks five lessons from the 2-0 series win over England.

South Africa completed a 2-0 series victory over England in their two-match T20 series. A three-wicket win off the final ball in Cape Town and a thumping nine wicket victory on Sunday means that South African cricket fans can breathe a sigh of relief, even if in the global context, these wins don’t mean that much.

The purpose of the series against England, and the three-match T20 series against Australia that will follow, is all about getting combinations right and so far, the Proteas look on track. There are a few players who are due to return from injury which might make selection a bit trickier but figuring out where to slot players like Dale Steyn and Quinton de Kock into a side isn’t the worst thing that can happen.

Here are some of the lessons we learned from the series victory:

For all his sins in Test cricket, Imran Tahir remains one of the best limited overs bowlers in the world. His effort in this series earned him a man of the series award, having best figures against a Test team (4-21) at Newlands and chipped in with 1-25 at the Wanderers. His bowling average in T20s is just 14.41, but it is his strike-rate of 13.5 that is perhaps most impressive. Since 2014, nobody has taken more wickets for South Africa in T20s than Tahir (25 at an average of 14.52 and a SR of 12.7). On surfaces where spin thrives, don’t be surprised if Tahir ends up being Proteas’ player of the tournament.

Chris Morris is the iceman

If it happened just once, you might say that Chris Morris pulling South Africa from the jaws of defeat was just a bit of luck. But it has happened more than once now and it seems South Africa have found their iceman in the Lance Klusener mould. With the batting collapsing all around him in Cape Town, Morris held his nerve to hit 17 off just seven balls to help South Africa to a last-ball victory. He had done something similar in a one-day match the week before, too, and on both occasions he was as cool as ice. Having somebody who can stay so immensely calm under pressure will make a big difference to how this team approaches chases in limited overs matches. It will be especially useful in knockout matches in ICC events.

There’s a little bit of a selection dilemma coming up

With Hashim Amla playing as well as he did in the second T20, South Africa might have a pleasant selection dilemma on their hands for the upcoming T20s against Australia and the World T20. Quinton de Kock was rested as a precautionary measure for this series but will be back against the Aussies and in India for the World T20, so South Africa will have to decide how to jiggle the balance of the side to include all three. In a bid to manage AB de Villiers’ workload, he might get a rest against Australia to see how the Amla-De Kock partnership does.

But in the World T20, finding a way to include all three in the batting line-up will mean dropping either JP Duminy, Rilee Rossouw or David Miller. Prior to this series, Faf du Plessis suggested that De Villiers will either open or bat at three, so it’s up to the middle order to stake a claim for their spot in the World T20 XI. De Villiers said at the post-match presentation that he will “open for as long as the team wants him to”, which means it will be Amla or De Kock who drops down the order.

It hardly mattered on Sunday, but in the first T20 at Newlands on Friday, South Africa’s middle order made hard work of chasing a modest total. Sweeping with gay abandon nearly cost them the game and on a wicket that didn’t offer that much for the tweakers, it doesn’t bode well for a whole entire tournament that is going to be played on the sub-continent. Stability in that middle order will be key when the team heads to the sub-continent.

The T20 format is such a curious beast. Snooty, try-hard purists will tell you that it’s not actually even cricket and while they might have a point to a degree, the use of bats, balls, helmets and boundary ropes means that it bears some sort of resemblance. But, here’s the thing about the format: the most entertaining matches are often some of the matches with the worst kind of cricket played. On Friday night at Newlands, the T20 between South Africa and England was riddled with mistakes from both sides. England lost their way with the bat, South Africa made hard work of what should have been a simple chase and yet, it was probably one of the most entertaining matches you’d have watched. Like a 6-5 result in soccer, the more errors there are, the more fun it is for the crowd. DM