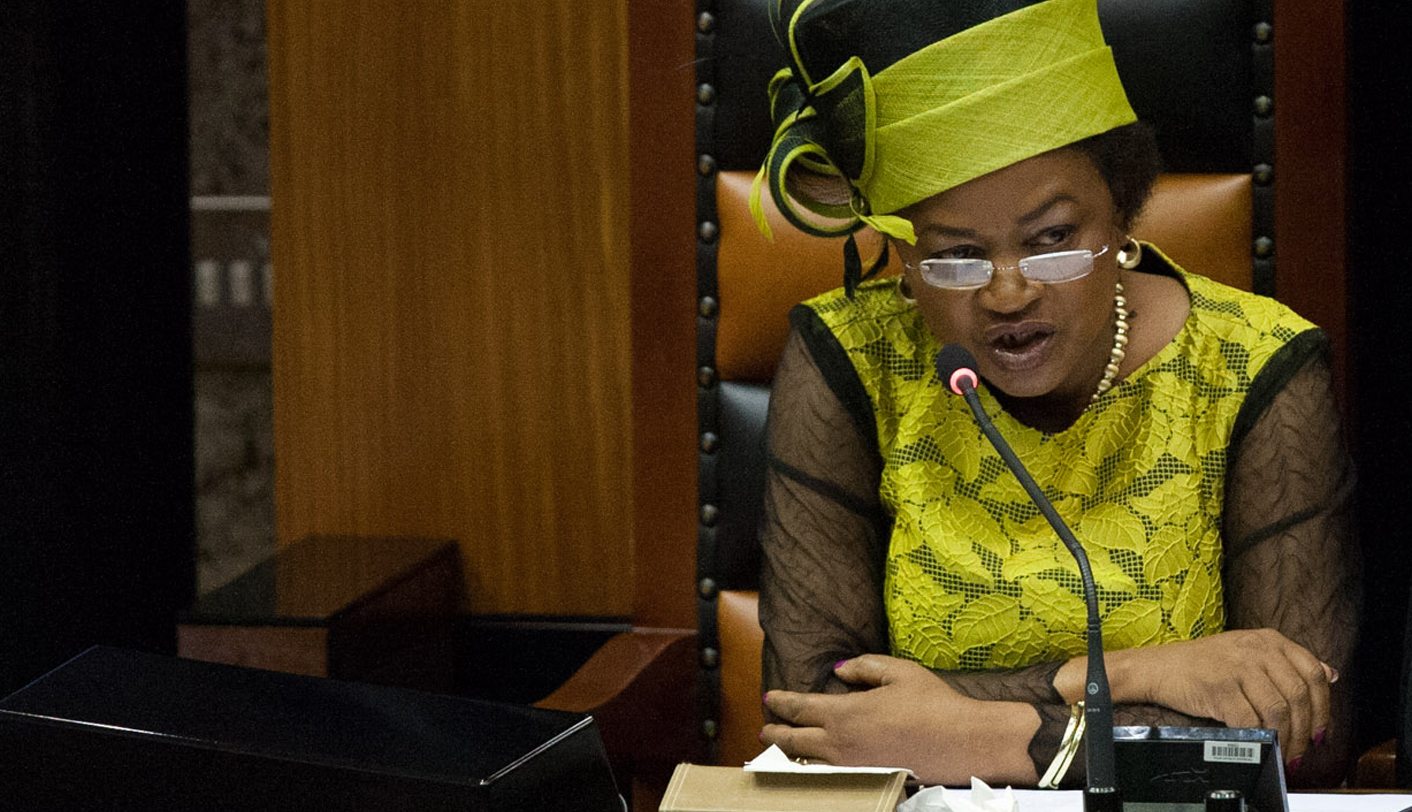 Parliament is under the whip. Some three dozen of committee meetings have been scheduled from Tuesday 23rd to Thursday 25th. But the much anticipated Budget speech, delivered Finance Minister Pravin Gordhan, will take place on Wednesday 24th from 2pm. By MARIANNE MERTEN.

The spotlight in the House will squarely be on the finance minister, who returned to the portfolio after the musical chairs of three finance ministers over four mad days of December. Gordhan must deliver the details of finding tens of billions of Rands to balance the books under the spectre of a further downgrade to junk status. Being downgraded to junk status would make global borrowing significantly more costly and difficult as most investors ban dealings with junk status countries. The reality of a drought is impacting not only on farmers, but also millions of citizens who face rising food prices and food insecurity. Gordhan will have to find the way to face that massive crisis toy.

The State of the Nation Address (SONA), and President Jacob Zuma’s reply to last week’s fractious parliamentary debate on his speech, although heavily focused on the economy, provided few actial details.

Away from being the most anticipated Budget speech in the past couple of decades, the parliamentary standing committee on finance must do its bit to ensure the controversial Taxation Laws Amendment Act is amended, as decided by cabinet and at the National Economic Development and Labour Council (Nedlac).

The amendment will postpone for two years, to March 1, 2018, the implementation of the controversial provision to end the full pay-out of provident fund monies over R247, 000. The Act, as it stands now, would mean that, like pension fund members, those with provident funds over the threshold would only be allowed to take out a third of their money, with the remainder being paid out over time in what is called annuitisation. Other provisions, like the pro-consumer reform of tax breaks on retirement savings will be implemented from March 1, 2016 as planned.

Cabinet last week agreed to the postponement of the controversial provision. This came after a series of meetings within the ANC-led tripartite alliance, government and statutory entities. These were triggered when labour federation Cosatu, the governing ANC’s alliance partner, publicly said last month that the Act would “complicate the campaigning for the upcoming local government elections”.

Also opposed to the provision are metalworker’s union Numsa and the Association of Mineworkers and Construction Union (Amcu). Both, alongside Cosatu, have promised to strike over the matter, while Numsa said it also would head to the courts. In the absence of comprehensive social security – government’s proposals have been years in the making – all want the provision scrapped, not postponed.

It’s been a long-standing dispute. In early 2015 the law was postponed by a year. It was passed by parliament in the final days of last year’s calendar in late November 2015, to come into effect on March 1, 2016. Zuma signed the law onto the statute books on Christmas Eve, and it was published in the Government Gazette on January 8, 2016.

The postponement of the controversial provision by cabinet came two days after Gordhan met with government, business and labour partners at Nedlac. “There was a general consensus on the deferment of the implementation date (at Nedlac),” said Minister in Presidency Jeff Radebe, who was mandated by President Jacob Zuma to resolve the dispute. Speaking at the post-cabinet briefing last week, the minister said the president had been unaware of the opposition to the clause, and concerns over a lack of negotiations. He was optimistic about tight parliamentary timeframe for the amendment legislation: “Our understanding, it is possible to do it…”

The only way to change the Act is by another Act. It’s not like shuffling finance ministers, who serve at the pleasure of the president who can appoint his own men and women into the Executive in line with Section 91(2) of the Constitution.

The Money Bill, parliamentary-lingo for finance legislation, must be introduced, then referred to the committee, which must hold public hearings, before the draft law eventually is voted on in the National Assembly. Then it goes to the National Council of Provinces (NCOP) before landing in the president’s in-tray so that it can be signed into law by Zuma.

However, parliament doesn’t sit Mondays, days dedicated for MPs to be in their constituencies, while Fridays are also traditionally quiet days with few, if any committees meeting and no sittings scheduled. The NCOP has its own timetable.

Standing committee on finance chairperson Yunus Carrim said engagements with legal and other parliamentary stakeholders already had happened. “We will, of course, process the Bill expeditiously, taking into account all the sensitivities. But, obviously, we will have to do so in terms of the laws and rules that define the processing of legislation in parliament,” he said.

The pressure is on. And parliament may just have to break a speed record with this piece of legislation. DM