Trainspotter: Enter the Void – a day in the life of Lily Mine 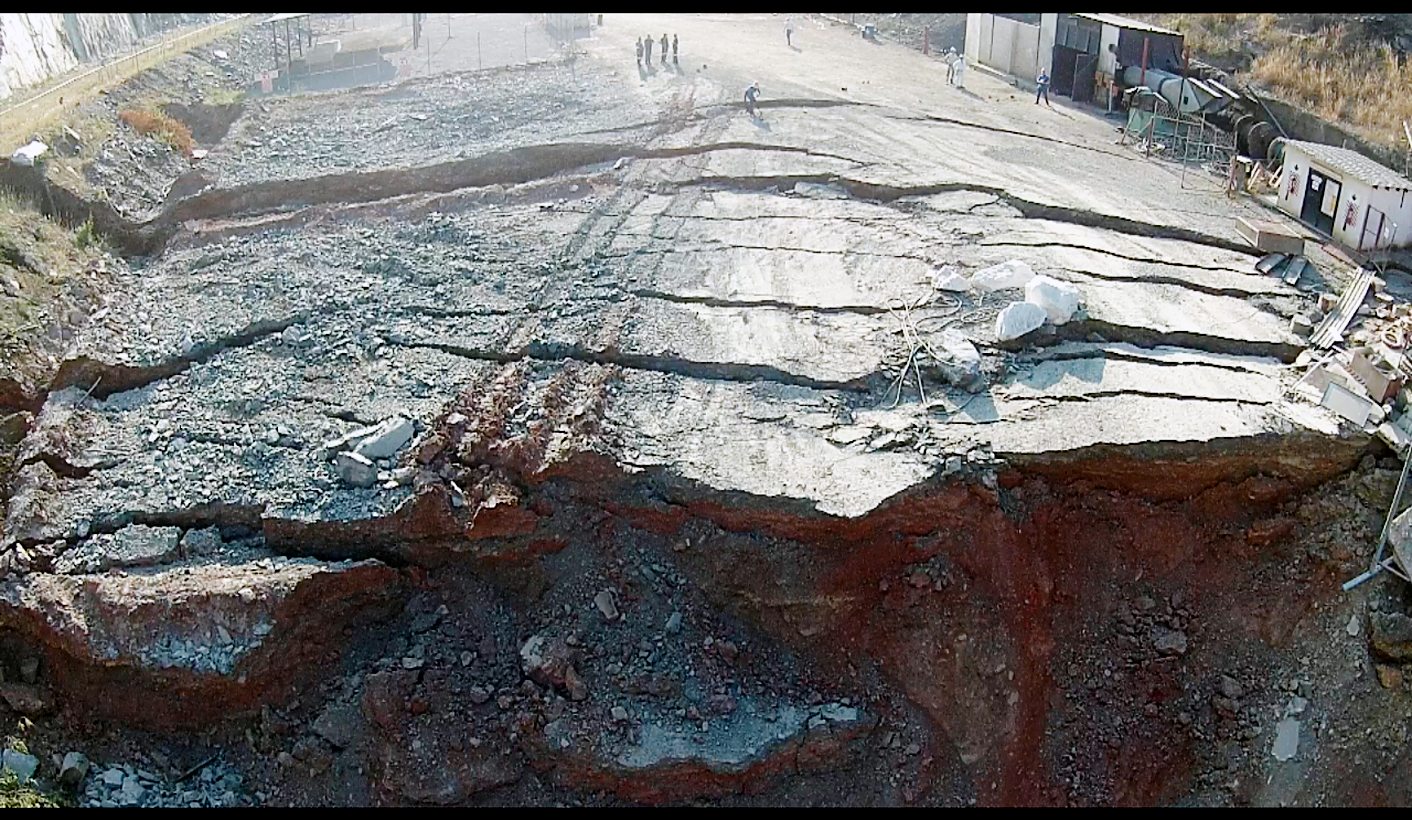 It’s been 11 days since the mine collapsed, trapping three workers in the lamp room of a container under tens of thousands of tons of rock. This was meant to be a feel-good story, with the world watching as we saved those workers — and perhaps the mining sector itself — from its eternal ignominy. But that is looking less and less likely, as the void only widens. By RICHARD POPLAK.

“Every Rock Has a Story.”

So runs the title of Dave Mourent’s geology lecture, which he offers weekly to interested parties walking Barberton’s craggy, UNESCO Heritage-Site worthy geo trail. The rocks that form the Barberton Greenstone Belt, says Mourent, are some of the oldest in the world. Three thousand and five hundred million years ago, streams of lava from the ocean floor forced their way to the water’s surface, forming the planet’s very first land mass. Barberton: this is where the world as we know it took shape. “The whole region would have resembled what we see in the Philippines today,” says Mourent, referring not to that country’s disastrous political situation but to its lengthy Pacific archipelago. Back in the earth-forming days, the subduction of the tectonic plates smooshed the surface of the Barberton islands into a landscape that resembled the scruff of a shar pei’s neck. All of this activity, which unfolded slowly—but in geological time not that slowly—resulted in a network of faults, through which mineral-rich hot water rushed to the surface in great, orgasmic bursts. Three billion or so years later, men from afar panned the resulting rivers, attracted by the telltale zigzags of white quartz in the region’s rock.

On a swathe of this gold-rich territory, termed the Fig Tree group by Dave Mourent’s geological fraternity, are perched a number of mines. This is the oldest bank vault in the world, one that the Lily Mine has been raiding since 2000. Named for the fault upon which it is situated, it is owned by Vantage Goldfields and located 40 or so kilometres outside of Barberton, at the end of a winding gravel road that leads up from the gruesome, piss-poor hamlet of Louisville. Lily Mine is announced by a barbed-wire fence, a mound of slate-grey earth, and beyond that: nothing. Or, rather, nothingness: two white tents and a spotlight marking the fringes of a giant, cataclysmic absence.

No one has thought to remove a black sign with painted with yellow words proclaiming “mine office”, but on February 5, without any warning, the office and the earth surrounding it boarded a one-way express elevator to Hell. Inside a container that served as an administrative office, three mineworkers were sucked underground after the mine’s crown pillar gave way, resulting in a sinkhole remarkable for both its size and its depth. There were no cues, no seismic murmurs to suggest what was coming. It will take some time to establish why the vital support failed, and no one really wants to face that question right now: Barberton is a mining town in a mining region, and the misery and heartbreak stretches across race and class. One ex-Lily employee, whom I met in a pub, described the tragedy as “an act of God.” But which God? The Yahweh of the Old Testament, the dude with the soup-stained beard and the unreadable sense of humour? Or the shareholders and stakeholders of an Australian Securities Exchange-listed corporation, who don’t need to care about the safety of distant workers, and who consider labour an inconvenience soon to be eliminated by drones?

God, Faith, Hope. All manner of magical thinking has been applied to the plight of Lily’s lost mine workers, in no small part because they are so entirely regular: Pretty Mabuza, Solomon Nyarenda and Yvonne Mnisi, working class folk in South Africa’s only viable non-viable industry. What’s more, we understand all too well the atavistic terror of being buried alive, so much so that the shrinks have a term for it: taphophobia. Fear of the grave. Two days after the collapse, sonar equipment picked up faint sounds from what engineers believed was inside the container. Would this unfold South Africa’s very own version of the Chile mine collapse, where Los 33 were famously pulled from certain death after 69 days underground?

No one was willing to believe otherwise.

It has been over a week since a peep was last heard from the container. No one knows what has occurred under all that rock. The ground is still shifting, and last Saturday an unspectacular plume of dust marked a second, and then a third collapse. Before that, rescue workers in heavy gear forced their way down a shaft, trying to bash their way through boulders the size of 747’s. That was halted by the rock fall, and on Sunday the mine suspended all further rescue efforts.

Now, inside the complex, sonar experts attempt to speak to what was once there. And yet the hole—a vast dry gulf of the earth’s oldest expanse—refuses to speak back.

Into the vacuum: politics. The ANC’s t-shirt division has been busy around these parts, and the region’s many poor are sporting spanking new yellow T’s. The EFF has dropped by. Everyone is sniffing around, and yet the journos who have camped out since day one have been loathe to give them a hearing. This has been one of those strange, personal disasters, where everyone feels a tug toward the victims. Affiliation evaporates the closer one gets to the source.

The Association of Mineworkers and Construction Union (AMCU) serves as the majority organizer on the mine, and they came about it the hard way. “I recruited there myself for weeks,” AMCU president Joseph Mathunjwa told me over the phone. Back in 2010, most Lily-ites were earning R700 a month, a slave wage by any measure. AMCU came in, forced a seven-week strike, and things have looked up since then, insofar as anything in the mining sector has looked up since commodities prices tanked and China decided to take the year off.

Municipal elections loom, and everyone wants a piece of Lily. But Lily will not put out. Mathunjwa is largely satisfied with the mine management’s response so far, largely because they’ve reacted with the correct mixture of terror and haste. Again—everyone knows everyone here, and there are generational links. “One should say that at the present moment, everyone has been focused on reaching these workers—that’s where the effort was channeled. We have all been positive. The rocks trapping them are huge. They have done what they can.”

Mathunjwa himself has trudged down the remaining shaft with dozens of professionals and volunteers, and he knows the challenges facing the rescue effort. He wants the government to stop dithering and to call a national emergency. If that happens, experienced engineering firms such as Murray and Roberts, who helped free the miners in Chile, can schlep their massive digging gear up to Lily and get to work. Until then, the resources remain limited. Vantage Goldfields cannot sink a second escape shaft for rescue workers, and so rescue work cannot continue.

“Why are we waiting?” Mathunjwa wanted to know. “Surely they need to prioritize—it should be a directive type approach. Now lets bring in the experts, the ones who went to Chile? Can’t we do something?”

But what hope can there be for these people after 11 days underground? Not every story ends with Antonio Banderas weeping into Hollywood-manufactured dust.

On the evening of the 11th day, a small group of ANC supporters sit outside the gates of the mine, waiting. Inside, various teams of experts have been down to assess the stability of the sinkhole, but no decisions have been made. To ensure that no decisions will ever get made, a parliamentary portfolio committee has been sent to make their own assessment. Representing parliament, who were that afternoon engaged in trying to one-up each other on calorie-free discourse, the committee walked above a sinkhole the dimensions of which are breathtaking, and delayed making anything that resembled a decision.

According to committee Chairperson Sahlulele Luzipo, they had come to pledge solidarity “and strengthen the family who are under a dark cloud.” He would not discuss anything substantive, but was here to assure us that he wanted the workers above ground forthwith. What of the government declaring a national disaster? “The workers did not work for the government. They were employed by a private company. We shouldn’t talk about government releasing resources –whose resources? Who did they work for? Let’s just concentrate on the rescue of the workers.

Even by the standards of geological time, the government moves slowly.

Private/public—out there in the real world the lines blur, right up until its time to start digging. So much hope has been pinned on the rescue of Pretty Mabuza, Solomon Nyarenda and Yvonne Mnisi. Perhaps rescuing them alive will expunge the sin of Marikana, where faceless miners were shot down and no one sent Murray and Roberts to help. Perhaps they are representatives of the tens of thousands of South Africans who will lose their jobs in this sector as commodity prices continue to plunge—and by saving the Lily workers we’re play-acting a solution for our economic sinkhole.

Perhaps there is something resembling humanity left in this country, and we have suddenly learned that every life matters.

On Wednesday, Joseph Mathunjwa and Vantage Goldfields CEO Michael McChesney will make a joint statement. Will they address the issue of turning this dormant rescue mission into a recovery operation? That’s up to them and the families. Meanwhile the void remains intact, both a real geological barrier to freeing three real people, and a symbolic representation of what faces a failing sector. For millennia, people have mined in South Africa; this is not the first collapse. And yet, there is something Armageddon-like about it.

There is nothing the ancient earth of Lily Mine has not seen. And yet, the earth does not know the uniqueness of the people in the container. Buried alive—what a thought. They are alone with the Alone, as Robert Warren Penn once wrote. And it’s His move. DM

Photo of Lily Mine sinkhole by Richard Poplak.

A vast dust cloud in the centre of our universe possesses a chemical responsible for the flavour of raspberries and it smells like rum.

Kathryn Cleary for Spotlight • 15 hours ago