Book review: The official incompetence, laziness and cronyism – behind the nightmare of Chernobyl 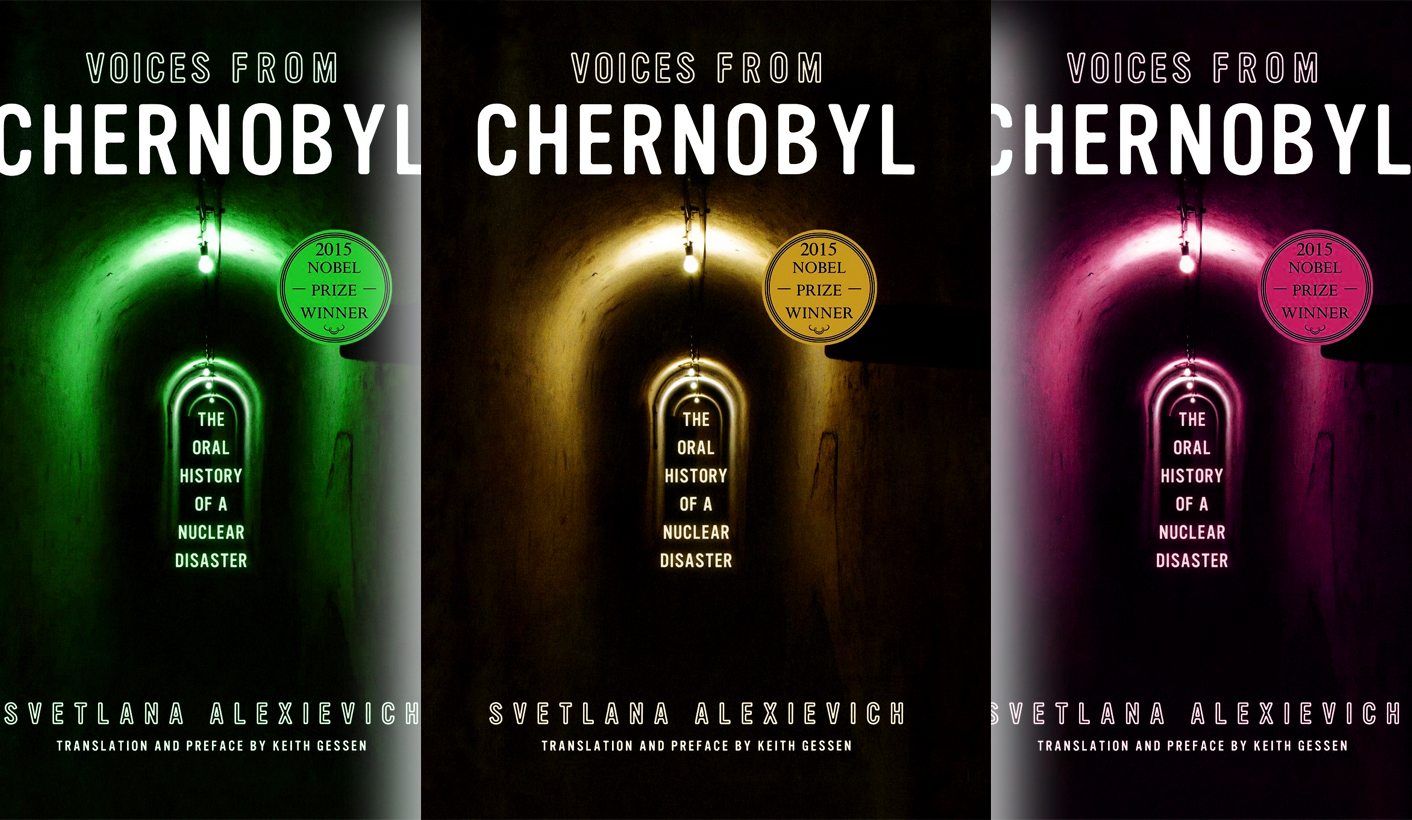 Nobel laureate Svetlana Alexievich's devastating “Voices from Chernobyl – The Oral History of a Nuclear Disaster”, is a towering work not only about the devastating effects on the lives of ordinary people who survived the 1986 nuclear accident in the Ukraine, but also of government incompetence, cruelty, lies and official cover-up. While there was only one immediate casualty (as many as 4000 died in the later years), the scale of the aftermath was so cataclysmic, so vast and so enduring that it can only be told in through the small, anguished voices of the ordinary people who perished and those who survived. By MARIANNE THAMM.

While this “novel of voices” by the Ukrainian-born journalist and writer Svetlana Alexievich, winner of last year’s Nobel Prize in Literature, might be a monument to courage and suffering, it is also a devastating indictment of government indifference, incompetence and cruelty and perhaps a cautionary tale for anyone, including South Africa, flirting with the idea of massive nuclear power deployment. Perhaps in our case particularly pertinent, considering President Jacob Zuma’s intended nuclear procurement programme with Russia.

Last year, after President Zuma’s SONA, details of the South African/Russian nuclear deal emerged that that South Africa would be held liable for any accidents at power plants and that the country would also be financially bound by the deal. This year the President back-tracked somewhat, stating that the country’s nuclear expansion programme remained part of a future energy mix but that government would “test the market to ascertain the true cost” of building the plants.

Alexievich’s book uncompromisingly exposes the continued human cost of one of the most devastating 20th Century nuclear accidents at the Chernobyl nuclear plant near the town of Pripyat in the Ukraine on 26 April 1986.

In the foreword to this translation (published by Picador) Keith Gessen contextualises Alexievich’s extraordinary project thus: “Chernobyl, while an accident in the sense that no one intentionally set it off, was also the deliberate product of a culture of cronyism, laziness, and a deep-seated indifference toward the general population. The literature on the subject is pretty unanimous in its opinion that the Soviet system had taken a poorly designed reactor and then staffed it with a group of incompetents. It then proceeded, as the interviews in this book attest, to lie about the disaster in the most criminal way.”

Gessen reminds readers that in the first ten days, as a fire raged within the reactor’s core releasing a steady stream of highly radioactive material into surrounding areas, authorities repeatedly claimed the situation was under control.

Alexievich interviewed survivors of the disaster in the 1990s and presents in “Voices From Chernobyl” a straightforward but deeply nuanced account of the voices of these ordinary people, the wives and widows of the original fire fighters, the elderly left to fend for themselves, the Chernobyl liquidators, monologues from those who have returned to the poisoned earth, stories of mothers of children born with abnormalities no one has seen before. And it is in the simplicity of allowing these people to speak for themselves that the power and artistry of this book lies.

The author has written that after Chernobyl we live in a different world:

“In fact two catastrophes happened at almost the same time – one of cosmic dimension in Chernobyl and the social catastrophe when the huge socialist mainland went under. The second crash overshadowed the first one because it was of more immediate concern to us and more understandable. What happened in Chernobyl was the first such catastrophe and we are the first to experience it. We are now living with it, something is happening to us: the blood formula and the genetic codes change, familiar landscapes disappear. But to fully comprehend what is happening we would need different human experience and a different inner instrument, which does not exist yet. Our vision and nose do not yet sense the new enemy, one that is coming from the future – radiation.”

She captures in this collection the full horror of the story.

And it is truly a post-apocalypic landscape where irradiated animals and birds change colour and go insane, where families are ordered overnight to leave their homes, their pets, their possessions, where loved-ones die agonising and excruciating deaths.

Here is the voice of one liquidator, Arkady Filin:

“You immediately find yourself in this fantastic world, where the Apocalypse met the Stone Age. And for me it was sharper, barer. We lived in the forest, in tents, twenty kilometers from the reactor, like partisans. We were between twenty-five and forty, some of us had university degrees, or vocational-technical degrees. I’m a history teacher, for example. Instead of machine guns they gave us shovels. We buried trash heaps and gardens. The women in the villages watched us and crossed themselves. We had gloves, respirators, and surgical robes. The sun beat down on us. We showed up in their yards like demons, They didn’t understand we had to bury the gardens, rip up their garlic and cabbage when it looked like ordinary garlic and ordinary cabbage. The old women would cross themselves and say, ‘Boys, what is this – is it the end of the world’”.

Awarding Alexievich the Nobel Prize, the academy cited her for inventing “a new kind of literary genre” and described her work as “a history of emotions – a history of the soul, if you wish.”

Alexievich’s book, while taking the reader deep inside this toxic world and those who inhabit it, is humbling in its humanity, powerful in its unadorned simplicity. DM

They can run, but they can’t hide forever: We must never give up in our pursuit of the Guptas