State of the Nation 2016: Commotion, crisis of credibility and the great appeasement 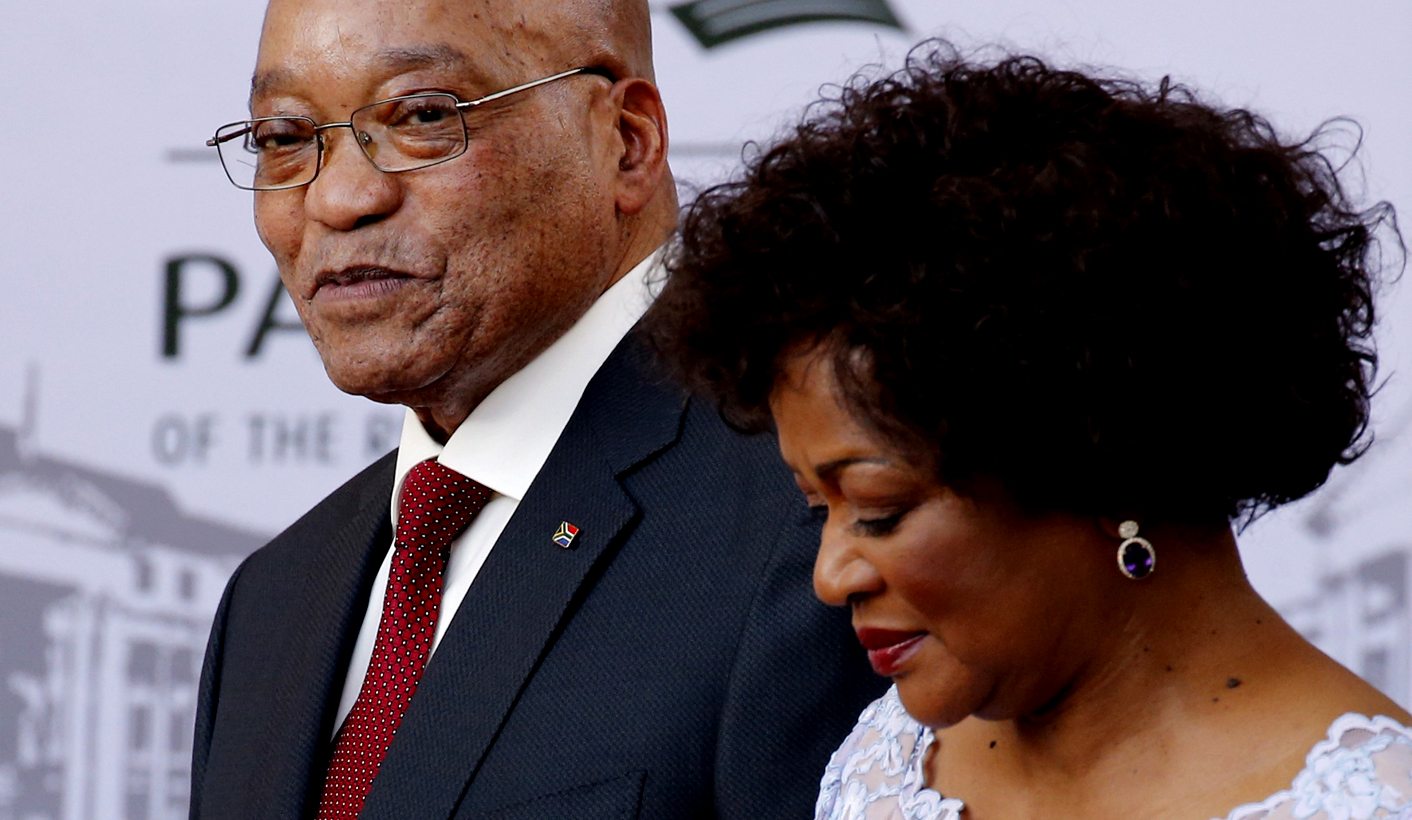 At the end, everyone got what they wanted. President Jacob Zuma made it through his State of the Nation Address (Sona), the Economic Freedom Fighters caused a din and held up proceedings and the Democratic Alliance came across as the reasonable guys. Even Mosiuoa Lekota got what he wanted – five minutes of fame on the biggest night on the parliamentary calendar. And Mangosuthu Buthelezi looked mightily pleased to crack an acknowledgement in the speech. The Sona was a mega appeasement effort to the business and investment community to undo the damage Zuma had inflicted on the economy. His general message to South Africa was: I have heard you. By RANJENI MUNUSAMY.

There were telltale signs that things were different at this year’s State of the Nation Address. The ring of steel around Parliament, the reduction of the pomp and ceremony, the president and deputy president skipping their stroll up the red carpet and the worried looks in the ANC benches. Most revealing was that there was no giggling and swagger from President Jacob Zuma.

Our president can shake off most things. But clearly the outrage over his firing of former Finance Minister Nhlanhla Nene, the walloping he received in the Constitutional Court and the turning tide in the ANC and the alliance has hit home. He cannot laugh it off anymore and continue happily rotating on his own axis.

Either due to the heavy security or because of time constraints, Zuma and Deputy President Cyril Ramaphosa did not do their usual meet and greet on the red carpet, but were driven most of the way up, flanked by heavy security. The extraordinary security operation was due to the Economic Freedom Fighters’ (EFF) threat to interrupt the Sona and various protests in the Cape Town city centre.

While the EFF had made it well known that they would interrupt Zuma to demand answers about the firing of Nene, it was not clear just how much trouble they would stir or what their strategy was. When the EFF caucus filed into the National Assembly singing loudly, it looked like they might keep singing until they got thrown out. They continued singing when the provincial premiers and speakers walked into the chamber, temporarily drowned out by the ANC caucus chanting “ANC! ANC! ANC!”

However when the judiciary filed into the House, led by Chief Justice Mogoeng Mogoeng, Malema held up one hand and his members immediately fell silent. They joined the standing ovation for the judges, signalling that it was only them whom they respect.

As soon as Speaker Baleka Mbete called Zuma up to speak, the interjections and points of order began. The predictable commotion ensued with Mbete failing to keep control. At one stage, Zuma glared at Mbete from his seat as she undermined her own rulings, allowing points of order when she had ruled no more would be allowed.

Zuma eventually went up to the podium but was interrupted several times. In one rather bizarre moment, the EFF MPs were sitting quietly and Congress of the People (Cope) leader Mosiuoa Lekota interjected, citing Zuma’s capitulation in the Constitutional Court on Tuesday as evidence that he had violated his oath of office. Mbete asked him to leave the chamber and he was followed out by three other Cope MPs.

The EFF contingent eventually left too, after Mbete called in the Sergeant at Arms. They chanted “Zupta Must Fall” as they left – their new campaign slogan targeting Zuma and the Gupta family. The EFF successfully held up proceedings for an hour, mostly due to Mbete’s clumsy handling of the situation. Outside Parliament, Malema told reporters that the EFF would not “over-glorify the Sona” and would continue to exercise their right to speak at any time.

Translation: They would continue tormenting Zuma at his every appearance in Parliament, even after his agreement to pay back the money for Nkandla.

But the EFF actually did not need to harass and interrupt Zuma to diminish him. The president had already greatly diminished himself with his sabotage of the economy by firing Nene and his spectacular climbdown at the Constitutional Court over Nkandla.

He could never and would never apologise for his actions, particularly not at the Sona. But one message running throughout the Sona was that he had heard the concerns of various constituencies on a number of issues and was taking action to address these.

The sections of the speech on the economy were clearly aimed at placating the business sector and trying to avoid a ratings downgrade to junk status. Zuma’s meetings with CEOs earlier in the week had provided him with a lifeline to restore business confidence.

“We have heard the suggestions from business community on how we can turn the situation around and put the economy back on a growth path. We have heard the points about the need to create the correct investment support infrastructure,” Zuma said.

He said government had also heard the concerns raised about the performance of state owned enterprises and companies.

“For the state owned companies to contribute to the successful implementation of the National Development Plan, they must be financially sound. They must be properly governed and managed.”

“We have to streamline and sharpen the mandates of the companies and ensure that where there are overlaps in the mandates, there is immediate rationalisation. Those companies that are no longer relevant to our development agenda will be phased out,” Zuma said.

The president said the weak exchange rate, as well as the recent changes of visa regulations, should be taken advantage of to boost inbound tourism. Concerns from companies about delays in obtaining visas for skilled personnel from abroad had been heard, he said.

Government had also heard the appeals for policy certainty in the mining sector, especially with regards to the Mineral and Petroleum Resources Development Bill.

One thing Zuma has finally heard is the Treasury’s repeated appeals for cost containment in government. Pravin Gordhan had continuously preached the need to cut government wastage and excessive spending during his previous stint as Finance Minister, a mission Nene also tried to pursue. These appeals were not taken seriously. Gordhan is now clearly putting his reinforced foot down to prevent the onset of full austerity measures.

Zuma announced that overseas trips would be curtailed, the size of delegations would be “greatly reduced and standardised”, and further restrictions on conferences, catering, entertainment and social functions would be instituted. Budget vote dinners, which see government departments wining and dining their constituencies at state expense, have been scrapped. Zuma said Gordhan would announce more cost containment measures in the Budget in two weeks.

Gordhan’s clampdown was also evident in Zuma’s declaration that while the nuclear expansion programme would go ahead, “we will only procure nuclear on a scale and pace that our country can afford”.

In the context of cutting wastage of taxpayers’ money, Zuma said Parliament should consider the maintenance of two capitals, Pretoria and Cape Town. While moving Parliament from Cape Town to Pretoria had been suggested previously, the ANC might now push for it to put the squeeze on the DA-controlled territory. While having one capital will be cheaper in the long run, there will be significant expenditure involved in establishing Parliament in Gauteng.

Cosatu also received a nod in the great appeasement exercise. Zuma said he had heard concerns about the Tax Amendment Act that he had signed into law in December and government was in discussion with Cosatu on the matter.

There were no new announcements on university funding but Zuma said Gordhan would provide details of funding for the education shortfall in the Budget speech. On health, Zuma announced that a state-owned pharmaceutical company, Ketlaphela, had been established to participate in the supply of anti-retroviral drugs to the Department of Health from the 2016/17 financial year.

The “listening” president spoke of the complaints he received during his visits to a taxi and bus rank earlier this week to promote community engagement. “I was also able to speak to foreign nationals who said they queue daily to apply for documentation from the Department of Home Affairs. We will continue to visit communities to hear their concerns and suggestions.”

After years of existing in a bubble, Zuma’s disconnection with the society he leads has hit him hard. He walked into the National Assembly with a crisis of credibility and as a compromised leader. At several times during the EFF’s interruptions, he looked grim and wounded.

It was greatly revealing that the ANC did not indulge in the usual sycophancy this year. Applause was muted and expressions were dour. Mbete was mostly left to fend for herself to deal with the EFF, with Chairperson of the National Council of Provinces Thandi Modise occasionally intervening. ANC leaders expressed frustration with Mbete afterwards. But “mutterings” about Zuma’s leadership was also building in the ANC, they said. It is perhaps that that Zuma had heard loudest in the run up to the Sona, and it is that that worries him the most.

The Sona 2016 by no means made up for the myriad mistakes Zuma has committed, particularly his deadly gamble with the finance ministry. But clearly he has received a few wake up calls of late, the latest of which was his humiliation in the Constitutional Court. But whether these can invoke a turnaround in his disastrous presidency is doubtful. The sound Zuma really needs to hear is growing cacophony inside the ANC and alliance and among ordinary people telling him to go. DM

Photo: South Africa’s President Jacob Zuma arrives with Speaker of Parliament Baleka Mbete to give his State of the Nation address at the opening session of Parliament in Cape Town, February 11, 2016. REUTERS/Mike Hutchings.