Nearly 1,000 hidden galaxies mapped behind the Milky Way – and SA helped find them 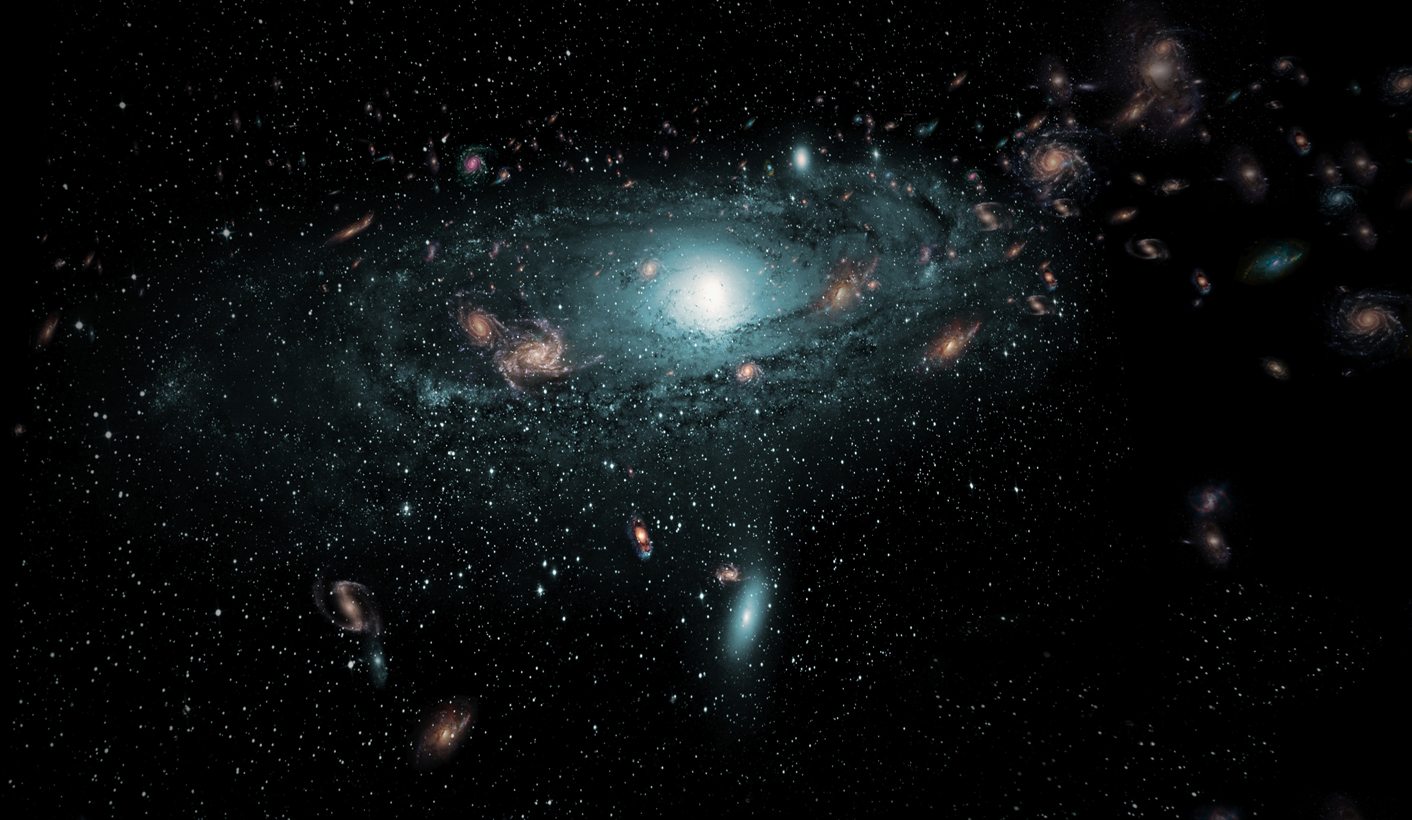 In a project that has taken decades, an international team of scientists that includes an astronomy researcher from UCT and another from the South African Astronomical Observatory (SAAO) have made a groundbreaking discovery. Using radio waves innovatively through a relatively old telescope, the team of scientists peered past the dust particles in the Milky Way that had obscured their view for years and added 883 new galaxies to the map of the sky. It’s a discovery that not only fills in significant blanks, it also completely changes our understanding of where our own galaxy is travelling to. By MARELISE VAN DER MERWE.

“We are like explorers of the universe,” Professor Renee Kraan-Korteweg told Daily Maverick on Wednesday, a few short hours after the embargo on the news was lifted. Kraan-Korteweg was emerging from a whirlwind of interviews; a dazzling change of pace after over almost 20 years of painstakingly capturing the data the team published in their paper. “It is just like in the past, when they started making maps of the earth. We are making maps of the sky.”

The team of scientists, involving researchers from Australia, South Africa, the USA and the Netherlands, published their paper on 9 February 2016 in the Astronomical Journal. Kraan-Korteweg, who is Chair of Astronomy at UCT, collaborated closely with the SAAO’s Dr Anja Schröder and first author Professor Lister Staveley-Smith, from the University of Western Australia node of the International Centre for Radio Astronomy Research (ICRAR). Other co-authors were P. A. Henning, B.S. Koribalski, I.M. Stewart and G. Heald.

In brief, their work sheds light (no pun intended) on hundreds of nearby galaxies which were previously obscured by our own Milky Way. The presence of these galaxies also explains a previously mysterious gravitational phenomenon known as the Great Attractor, so called because of its strong gravitational pull. To put this in perspective, it is drawing the Milky Way and hundreds of thousands of other galaxies towards it with a gravitational force suggesting it contains a mass of the order of one million billion suns: our whole Milky Way is moving towards the Great Attractor at two million kilometres per hour.

Scientists have been trying to get to the bottom of the mysterious Great Attractor since major deviations from universal expansion were first discovered in the 1970s and 1980s.

Watch: Animation showing the location of the galaxies discovered in the ‘Zone of Avoidance’. Until now this region of space has remained hidden from view because of the gas and dust of the Milky Way which blocks light at optical wavelengths from reaching telescopes on Earth. By using CSIRO’s Parkes radio telescope to detect radio waves that can travel through our galaxy’s gas and dust, hundreds of new galaxies have been found in the region of space known to astronomers as the ‘Zone of Avoidance’. This animation has been created using the actual positional data of the new galaxies and randomly populating the region with galaxies of different sizes, types and colours. Credit: ICRAR. Music by Holly Broadbent.

Kraan-Korteweg explains: “The Great Attractor got that name because there were indications that there was a huge area of over-density in the near universe that seemed to attract a lot of galaxies around it towards it, including our own. We are flying towards that part in the sky, which [in astronomical terms] is not too far away. When that was found, nobody knew why.

“Usually when there is motion it induced by gravity. When we have mass somewhere, it attracts something. We measured the motions and assumed it was induced by something, that there must be a lot of mass, but we couldn’t see it in the form of galaxies.”

Galaxies, explains Kraan-Korteweg, are not distributed uniformly in the universe. “They are social; they like to cluster,” she says. If you think of them as villages or cities, you will find that these clusters tend to grow, much like cities do; there are also large expanses of empty space, much like the northern Karoo. Wherever you have an over-density, she explains, it will attract other things around it.

So in the case of the Great Attractor, scientists knew there was something pulling us, and that there must be a large volume to it. “It was really to the limit of what theory seemed to allow,” she says. “It caused confusion in the past.” Now, this can be explained by the supercluster of galaxies that has been discovered, and which crosses the Milky Way diagonally.

Not, Kraan-Korteweg adds, that we need to worry about any of this – we’re not being Hoovered into the other end of the universe. Despite how alarming the speed of travel may sound, we won’t be needing seatbelts.

“It will take billions of years for us to move there,” she says. “At the same time, the universe is expanding, so this is a motion that is superimposed on the slowly expanding universe. We will get closer, but very slowly, and very far in the future. Things move towards it [the Attractor] and those things become denser. At the same time, things fly away from there, because they are attracted elsewhere.

“There may be denser concentrations of mass, but there will also be larger open spaces. It won’t matter to the galaxy very much. We are quite happily continuing our orbit.”

So how did the discovery actually come about, and why was it so difficult to get a glimpse in the first place? Kraan-Korteweg explains that despite being just 250 million light years from earth, which might not be a 20-minute drive but is – believe it or not – pretty close in astronomical terms, the newly mapped galaxies were obscured mostly due to dust particles in the sky. If you tried to look past the Milky Way, she says, you would find that there was such a thick layer of dust particles between the stars that you would not be able to see very far in any case.

Enter the 64m Parkes Radio Telescope – operational since 1961 – and equipped with an innovative receiver that was able to scan the sky 13 times faster than previously. A radio telescope can pick up emissions from galaxies that have a lot of neutral hydrogen gas, which emits spontaneously at radio wavelength. “We can measure that with radio telescopes,” says Kraan-Korteweg. “That emission is not blocked by the dust, because it has such long wavelengths it just floats around these tiny dust particles. So we can measure emissions from the gas in galaxies that lie behind the plane of our galaxy, and we can also measure at the same time where they are. While we cannot see them in optical light or even near infrared light, we can measure the radio waves and so see where they lie.” And so began the process of filling in the sky map.

The research identified several new structures that could help to explain the movement of the Milky Way, including three galaxy concentrations (named NW1, NW2 and NW3) and two new clusters (named CW1 and CW2).

Kraan-Korteweg, who is internationally recognised as leader in unveiling the galaxy and mass distribution behind the Plane of the Milky Way, has involved numerous students in this type of research. She said: “We’ve used a range of techniques, including telescopes at the SAAO, but only radio observations have really succeeded in allowing us to see through the thickest foreground layer of dust and stars in the inner Milky Way. An average galaxy contains 100 billion stars, so finding hundreds of new galaxies hidden behind the Milky Way points to a lot of mass we didn’t know about until now.” However, she added that this could lay the groundwork for much deeper surveys for neutral gas planned with the Square Kilometre Array precursors, such as MeerKAT.

Currently, she says, “We can see about 20 percent of the sky beautifully.” And the next step, having found these galaxies, is to attempt imaging into near infrared. The new telescopes, she hopes, will be so much bigger and more powerful “that we can take an incredible step further and go two orders of magnitude deeper”. So much deeper, in fact, that we can look into our own past.

“It has taken the light a long time to reach us,” she explains. “So when it was emitted, it was a time much earlier in the universe. We will actually be looking in the past, seeing how the galaxy lived. We can see how the galaxy formed its stars. That will be very helpful.” DM

Photo: An artist’s impression of the galaxies found in the ‘Zone of Avoidance’ behind the Milky Way. This scene has been created using the actual positional data of the new galaxies and randomly populating the region with galaxies of different sizes, types and colours. Credit: ICRAR.