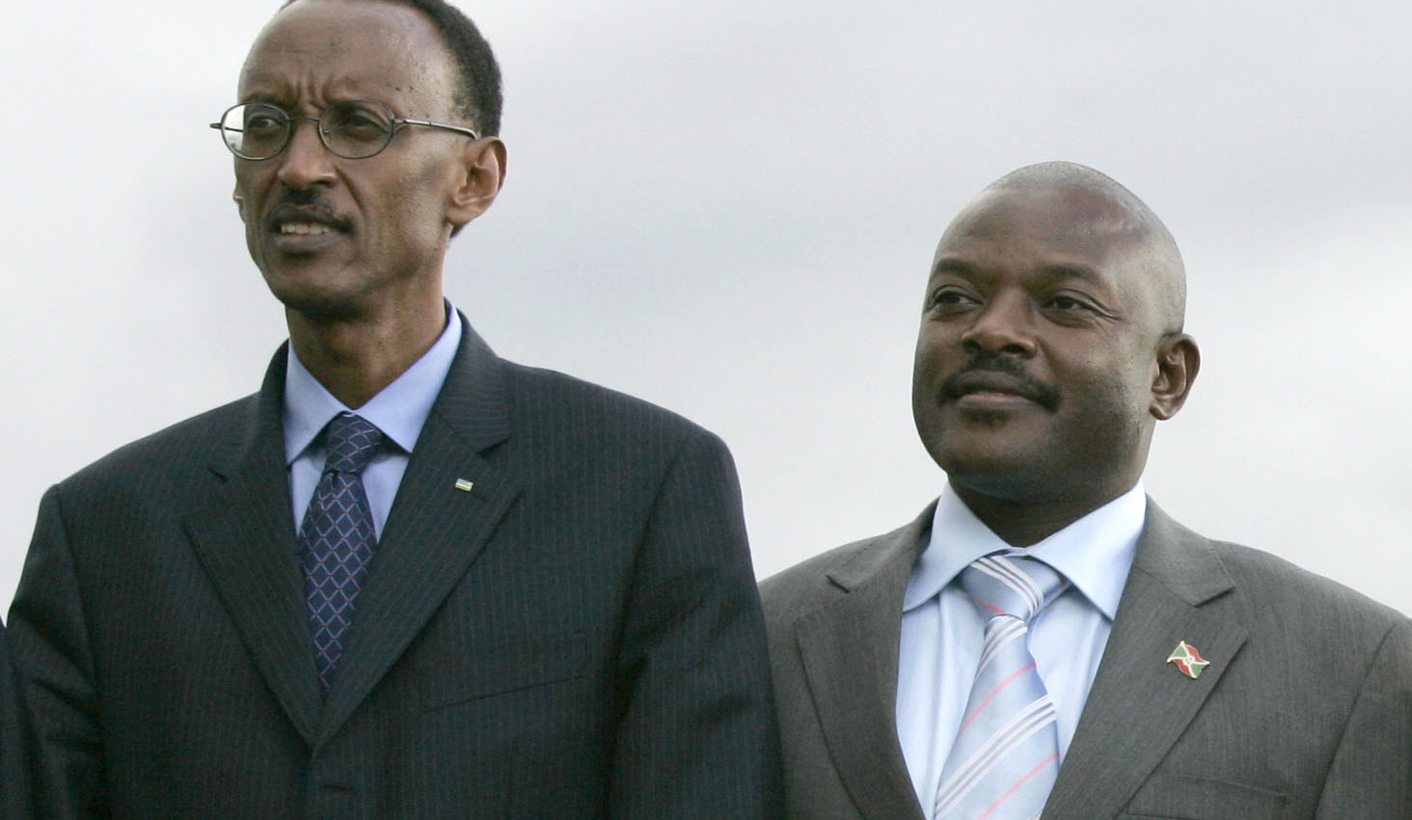 According to both the United Nations and the United States, Rwanda is arming and training Burundian rebels. The goal is to bring down President Nkurunziza, but why? What’s in it for Rwanda? SIMON ALLISON explores the complex relationship between two neighbours who really don’t get along.

It is 1973 and correspondent Stanley Meisler is describing a massacre in Burundi for The Atlantic. From Bujumbura, where the Tutsi elites have just wiped out tens of thousands of Hutus, he says “The slaughter that accompanied this devastation was not an isolated outburst in the history of this part of the world. It was only more and worse than what has happened before. There has been mass tribal killing in Burundi and its neighbor Rwanda for more than a decade, the killing in one provoking the killing in the other. The scene of the bloodshed, in fact, moved to Rwanda in the first months of this year. There is no end in sight.”

Fast forward 43 years. The world is once again contemplating extreme violence in Burundi. And while the nature of the conflict may have changed – it’s not all about Hutus and Tutsis – it is becoming increasingly clear that one thing has remained the same: where there’s trouble in Burundi, there’s trouble in Rwanda too. The histories of these two tiny nations are so deeply intertwined that their present cannot help but overlap.

It makes sense, then, that Kigali is watching Burundi’s slow but steady unravelling with a nervous eye. By conservative estimates some 400 people have already died and more than 200,000 have been fled the country. And it can’t come as too much of a surprise that Rwanda, with its all-action President Paul Kagame, is doing more than just watching.

Last week, a confidential United Nations report, seen by the New York Times, alleged that the Rwandan government was secretly training rebels in Burundi, with a view to overthrowing President Pierre Nkurunziza. The authors of the report said that they had spoken to 18 Burundian rebels who claimed to have been trained by Rwandan forces in the use of grenades, anti-tank mines and rocket-propelled grenades.

This week, the United States took up the complaint, in a meeting of the Senate Foreign Relations Committee. “There are credible reports of recruitment of Burundian refugees out of camps in Rwanda to participate in armed attacks by Burundian armed opposition against the Burundian government,” said Thomas Perriello, US envoy for the Great Lakes region of Africa.

“We have seen a number of reports from our colleagues in the field that suggest [that] the Rwandan government has been involved in destabilizing activities in Burundi,” said Linda Grant, US assistant secretary of state for African affairs.

Kagame has previously dismissed these claims as “childish”. Tellingly, however, neither he nor his foreign minister Louise Mushikiwabo have reacted directly to the US accusations. Mushikiwabo instead tweeted that the international community was not doing enough to stop the violence: “On #Burundi: is international community (whatever that means), incompetent, impotent or oblivious to gravity…daily murders and disappearances!”.

In the absence of an outright denial, this can be read as a justification: well at least we’re doing something.

Still, it’s worth questioning exactly what’s in it for Rwanda. Why has it identified Nkurunziza as the enemy?

First is the politics of ethnicity. Nkurunziza is a Hutu, and Kagame is a Tutsi president of a Hutu-majority country. If ethnic violence spreads from Burundi to Rwanda, it could pose an existential threat to Kagame’s regime.

Second is the difficult personal relationship between the two presidents. “Nkurunziza and Kagame have never had a good relationship. Clearly Kagame would prefer to have somebody in power who was more like-minded, possibly even a Tutsi, because Nkurunziza has never really played along with Kagame,” said Wolters.

Then there’s the domestic angle. Kagame has attracted plenty of criticism for his decision to amend the constitution to allow himself to contest the next elections. Burundi is the perfect diversion from this.

Finally, it’s important to remember that Rwanda has a history in clandestinely meddling in the affairs of their neighbours. “This is what Rwanda has done in the Democratic Republic of Congo (DRC) since 1996,” observed Wolters.

Rwanda’s long involvement in the DRC complicates the Burundi situation even further. Although unconfirmed, there have been some reports that the Democratic Force for the Liberation of Rwanda (FDLR), a Hutu-led militia founded by perpetrators of the 1994 Rwandan genocide, have been supporting Nkurunziza’s security forces. At one point last year, Rwanda demanded that Burundi account for the presence of the FDLR. Burundi flatly denied everything. If true, the presence of the FDLR in Burundi would provide the Rwandan government with a powerful incentive for further intervention.

Stanley Meisler concluded his 1973 reportage from Burundi on a pessimistic note. “It would be foolish now to be optimistic about the future of Rwanda and Burundi. Systematic murder of the ethnic enemy has become a legitimate political weapon in both countries. Since neither has solved its ethnic problems, it is a safe guess that slaughter will be used again. The ease with which it was renewed in Burundi this year is proof enough of that,” he wrote.

This time round, things aren’t quite so bad – yet. But Rwanda’s ongoing involvement in Burundi is a sign that the current conflict has the potential to rapidly escalate from domestic insurrection to a regional war, and means that any solution will have to take Kigali’s concerns into account too. DM