Cricket: Caught on the back foot and scorned by Boycott 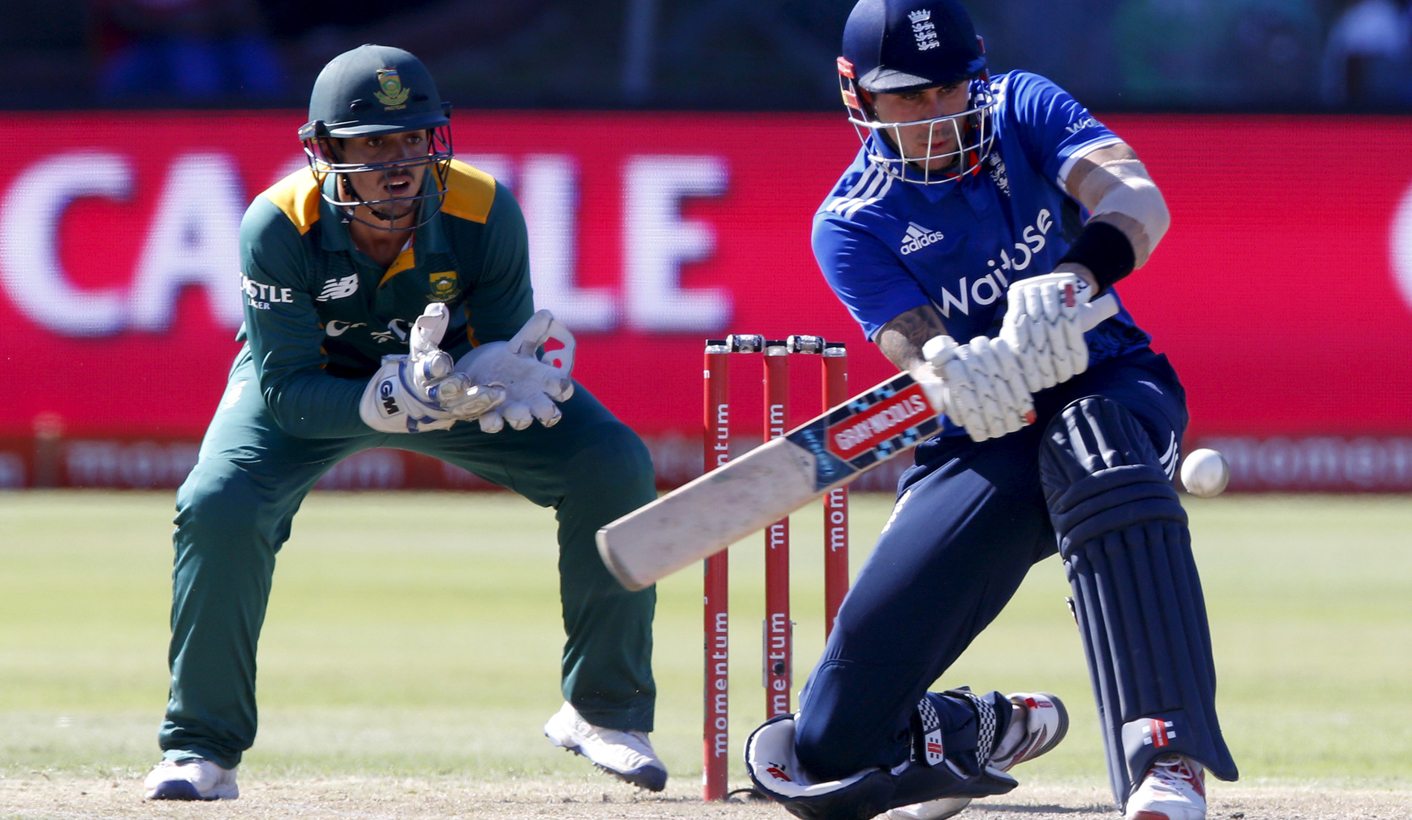 It was a tough weekend for South Africa’s national cricket teams with the men conceding a 0-2 series lead to England while the women also lost their first ODI against the same opposition. For the men, it was the fifth bowler that caused the most consternation while the women struggled in the batting department. By ANTOINETTE MULLER.

On a sluggish pitch in Port Elizabeth, South Africa conceded a 0-2 series lead to England on Saturday. Having set the visitors a modest target of 263, England managed a solid five-wicket win with 22 balls still to spare as the Proteas were left scratching their heads once again.

Many things went against South Africa’s batsmen on Saturday. De Villiers was the victim of yet another superb catch, JP Duminy was given out through a howler of an umpiring decision and Faf du Plessis was seduced by spin, but South Africa’s batsmen just don’t seem to be clicking at the moment. When one fires – as De Kock did in the first ODI – there is little support around him. In the second ODI, they did manage a few more partnerships – something which was glaringly absent in the first, but the batting seemed to lack substance.

While it was probably just one of those “bad days at the office” for South Africa’s batsmen, they will be feeling somewhat irked that they have not managed to dominate England’s bowling more, considering how inexperienced they are, especially up front.

England’s opening bowlers, Reece Topley and David Willey, have just over 20 caps between them while Ben Stokes tends to be inconsistent and Adil Rashid and Moeen Ali weren’t exactly threatening on the slow track in PE. Ali’s bowling average in ODIs is 35.72 while Rashid’s is 45.95, hardly reason to feel intimidated.

With just one half century to show (De Villiers’ 73), the bowlers were always going to have a tough time, even if key players Kyle Abbott and Kagiso Rabada had returned. And it is exactly with the bowling where one of the Proteas’ most glaring weaknesses was exposed.

Once again, the lack of a fifth frontline bowler proved to be problematic for South Africa. Between them, JP Duminy and Farhaan Behardien conceded 62 runs in ten overs without picking up a single wicket. In the first ODI, that number was 93 in ten overs. This configuration puts unnecessary pressure on spinner Imran Tahir. While Tahir might not be a Test bowler, he is immensely valuable in the shorter formats of the game, with the same excessive variations that causes him so much woe in the Test format being his greatest strength. Without somebody controlling the other end, Tahir has the same troubles in limited overs that he has in Tests.

South Africa needs to put more trust in their batting department if they want to bounce back from this series and need to offer their bowling line-up some relief. Former England batsman Geoffrey Boycott had some harsh words for the balance of South Africa’s team and the fifth bowler. He told the BBC’s Test Match Special: “Guys like Duminy and Behardien won’t even give me a good net. If they were to bowl to me in the nets, I’d say don’t bother, I might as well get two guys from the crowd to bowl at me.”

Those are harsh words, but considering South Africa are up against a dynamic and exciting batting line-up who are playing to have fun rather than to tick boxes, they make sense. Since their embarrassment at the 2015 World Cup, where they crashed out at the group stages, England has reinvented themselves in the one-day format. Stemming the flow of runs with the best bowlers up front is only half the job done. Like the Test side, the one-day team bats deep and are cool under pressure as Jos Buttler and Moeen Ali’s finishing showed in the second ODI. Even when De Villiers was desperately trying to throttle England by using Abbott and Rabada with two new batsmen at the crease, they were unfussed.

Such icy-veined players mean that pressure can never slip and trying to do that with just four bowlers is always going to be difficult. The simplest solution is to bring in Chris Morris or David Wiese in for either Duminy or Behardien. Morris is probably the better choice; he’s a more reliable bowler and has shown in the recent Test series that he does offer something with the bat. He might not have been overly impressive in the nine ODIs he has played, but he is the only option South Africa have right now and, as with Stephen Cook in the fourth and final Test, when your back is against the wall, you just have to roll the dice, especially when considering the next two fixtures will be played on the Highveld, where the ball tends to travel for miles.

Already busy on the Highveld over the weekend was South Africa’s women’s team. They are involved in a three-match ODI series against England, followed by a three-match T20 series. It’s been 12 years since South Africa beat England in ODIs and after Sunday, they will have to wait a little while longer for that victory to come.

Trisha Chetty notched up a career best 90 off 122 as the women stuttered to 196 all out in 49.2 overs. The pitch was sluggish, but the lack of significant contributions from the rest of the batting line-up cost them. Just one other player, Captain Mignon du Preez, managed to pass the 20-run mark with Anya Shrubsole leading the English attack.

Lightning and rain interrupted play on more than one occasion in Benoni which saw England’s target reduced to 150 off 35 overs, an easy task with a number of South Africa’s bowlers still rusty, having not played competitive cricket since November last year.

While the result was certainly disappointing, there is a new energy around this South African team, one which has been blossoming since they first turned professional two years ago. They still hardly play international cricket (they had just three fixtures in 2015 compared to England’s eight), but there is a distinct improvement in their cricket. If ever there was a time to beat England, this is it. DM