Jacob Zuma and Julius Malema: A collision course made in Nkandla 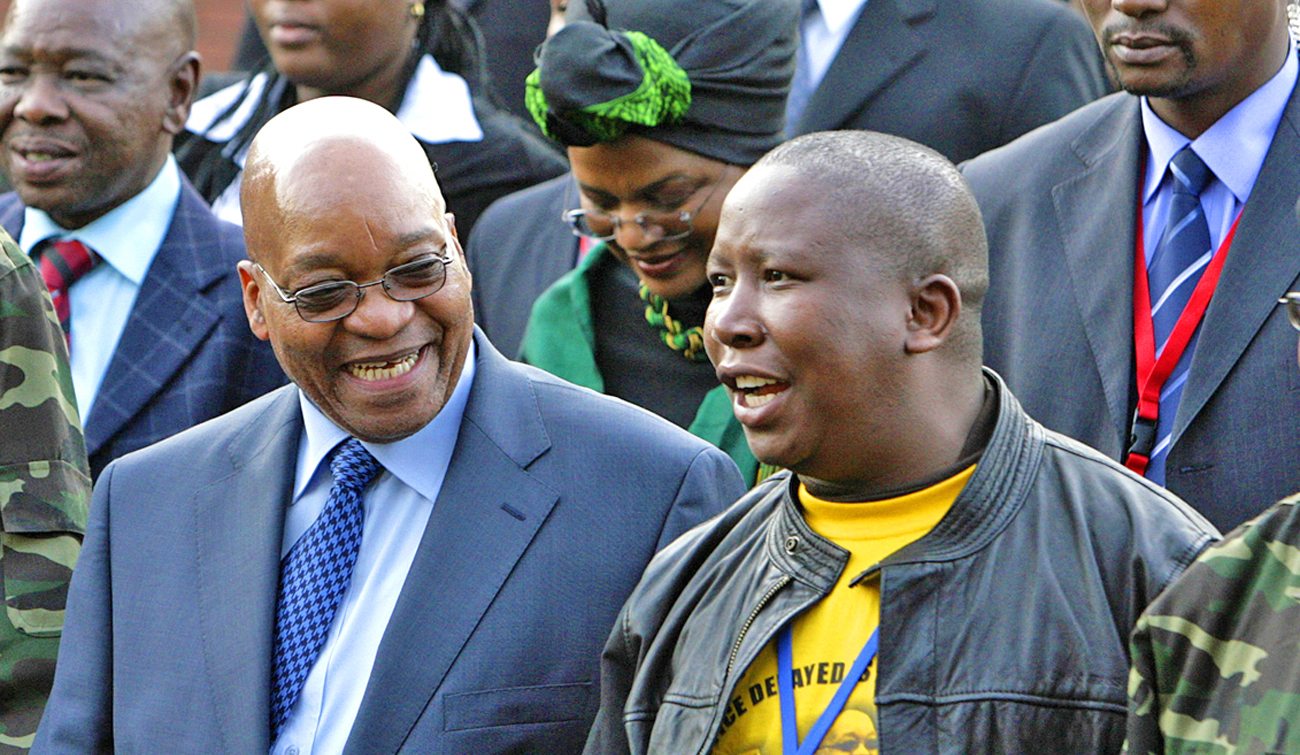 Next week President Jacob Zuma and Economic Freedom Fighters leader Julius Malema will face off on two different platforms, two days apart. The first will be at the highest court in the land, where an almost two-year battle over Nkandla reaches a climax. The second will be in Parliament at the State of the Nation Address (SONA), where Malema intends challenging Zuma on his mismanagement of the economy. It is the dance of death between the president and his nemesis. Zuma and Malema pushed each other to this point, a collision between political power and the rule of law, while they hold the country’s destiny in their hands. By RANJENI MUNUSAMY.

How far South Africa has travelled since the days when President Jacob Zuma endorsed Julius Malema as a “leader in the making” and someone who would be worthy of inheriting the ANC, and Malema said he was prepared to “take up arms and kill for Zuma”. At an ANC Youth League rally in the Free State in June 2008, Malema also said: “We are prepared to die for Zuma.”

In October 2009, at an event at Malema’s hometown of Seshego in Limpopo, Zuma said: “The ANC recognises talent and leadership and we give people an opportunity. Julius has illustrated that he is indeed a good leader and that he understands the people,” Zuma said.

Both Zuma and Malema saw something of themselves in each other, the mixture of power, charisma, heady populism and the potential to create disorder and rebellion. They were fellow travellers, ready to build each other’s power to sustain their own. Until they locked in combat to break each other down.

On Tuesday, lawyers for the president and the Economic Freedom Fighters (EFF) will stand before the Constitutional Court judges to argue over the compliance of the Public Protector’s report on Nkandla. They will be joined by the Democratic Alliance and Public Protector’s legal teams. In a surprise move on Tuesday night, the presidency announced that Zuma had written to the court proposing to pay for the non-security upgrades at his Nkandla residence an amount to be determined by the Auditor General and Minister of Finance.

It was a spectacular climb-down from the position Zuma had clung ardently to – he did not have to pay because he had not asked for the upgrades, the Public Protector Thuli Madonsela had made mere recommendations that he was not obliged to implement and no investigation had found that he had “taken a penny”.

At a media briefing on Thursday, Malema was triumphant. He knows he brought Zuma to his knees, desperate to escape censure from the Constitutional Court. Malema delivered him before the judges after a concerted battle in Parliament failed to break Zuma down. In Parliament, Zuma had the Speaker Baleka Mbete, the ANC caucus, parliamentary security, and even the police VIP protection unit shielding him. In court, Zuma only has his legal team, and judging by their proposal now to pay a portion of the Nkandla costs, they are not confident that the president is on the right side of the Constitution.

Zuma rode the crest of a wave during the various parliamentary processes, confident in the belief that he would never have to account for the state expenditure at his private home. Every time he was confronted by the opposition, he became more boastful of his invincibility, mocking and scolding them interchangeably.

He ignored the quiet voices of reason in the ANC and in his office to settle the Nkandla matter and protect himself and his party from further damage. He disregarded the concerns raised at ANC and alliance meetings about the pressure Nkandla was putting on everyone.

Zuma allowed a Chapter Nine institution to be attacked and undermined for his protection, irrespective of the consequences for our constitutional democracy. He believed that agreeing to pay was an admission of guilt, and told the ANC as much. He never wanted to put himself in the position where Malema, among others, could derive satisfaction from any concession on his part.

Now he has had to concede, and paying back the money is the only way to comply with the Constitution. He cannot make the matter go away, even with the 11th hour proposal to pay. The judges of the Constitutional Court will have to pronounce on the conduct of the President of the Republic.

Malema could not back down on the Nkandla matter. He claimed it, he owned it. He created #paybackthemoney and made it the EFF’s rallying call. He and other members of the EFF brought the National Assembly to a standstill on several occasions and at last year’s SONA, they were assaulted and carried out as the nation watched in shock. Zuma and the ANC assumed the EFF would stick to the campaign until they were exhausted and give in. They believed public fatigue with #paybackthemoney would lead the EFF to surrender it.

Then in August last year, Malema emptied the barrel in Parliament: “You can engage any other process but it will not help you because it comes back to one question: when are you paying back the money?”

Then came an unexpected announcement: “It’s very clear we won’t get clear answer from the president. We will see you in court.”

Over the past six months, Zuma’s bravado has waned. His removal of Nhlanhla Nene as finance minister in December caused widespread anger, even in the ANC. Where once he was indomitable, leaders in the ANC and the alliance are speaking out about Zuma’s relationship with the Gupta family, his perceived backing of the “premier league” faction and his badly advised decisions in government. While people’s concerns about Nkandla were previously dismissed, the issue can no longer be wished away.

Zuma is at his weakest point politically. He does not have the full support of the ANC when his case comes before the Constitutional Court on Tuesday. When he stands in Parliament on Thursday night to speak to the nation, people will remember how he wilfully put the economy at risk for inexplicable reasons two months ago.

Zuma can no longer laugh his problems away.

Malema on the other hand has been emboldened. Zuma is on the ropes and he intends to keep him there.

Malema said he did not care how much Zuma paid back for the Nkandla upgrades as long as he did so. This will not be the end of the affair, Malema said. Zuma must implement all Madonsela’s recommendations for remedial action, including reprimanding the ministers responsible for the “appalling” handling of the Nkandla matter. Once Zuma has paid, the EFF will announce further steps on the matter, Malema said.

With regard to SONA, Malema says Zuma must start his speech on Thursday by explaining why he fired Nene. If he does not, he will be stopped. Malema would not say how the EFF intends stopping the SONA.

And in a new development, Malema has come up with a brand new way to torment and pressurise Zuma: a war on the Guptas, the president’s close friends.

“Guptas must leave the country. We are going to take practical action. It’s a war against Guptas. We want to advise the Gupta television and newspapers they must no longer come to EFF events… We cannot guarantee their safety. They are a propaganda machinery of a corrupt cartel,” Malema said.

“Zuma and Guptas must fall. Zuptas must fall on 9th February,” he said. “We are not going to allow South Africa to be sold over a plate of curry.”

It is not clear where this campaign to attack all Gupta-owned companies and business dealings will go but the aim is to ratchet up Zuma’s discomfort level. Zuma has so far refused to distance himself from the Gupta family but with pressure now from inside the ANC and from outside, the relationship might be difficult to service.

While the EFF will face pushback from the media industry about the ban on journalists from Gupta-owned media companies, many people will support the family being reined in, particularly to stop their practice of abusing their political connections for financial gain.

With the Nkandla albatross around his neck, Zuma was a gift to the EFF, helping to establish and assert its presence in the political landscape. He aided the EFF in shaping its own brand of combat politics. Now Zuma’s relationship with the Guptas will be the EFF’s next campaign tool.

The question is whether Zuma would have learnt anything from the Nkandla fiasco or whether he will continue to empower his enemies and allow the systemic destruction of the ANC and the state for his self-preservation. DM

Photo: Jacob Zuma (L), leader of South Africa’s ruling African National Congress (ANC), chats with Julius Malema, president of African National Congress Youth League (ANCYL), at the Pietermaritzburg high court outside Durban August 4, 2008. Zuma appeared in court to push for the dismissal of a corruption case. Over 1,000 supporters demonstrated outside the high court in Pietermaritzburg to denounce charges they say are politically motivated and to try to stop Zuma from being put on trial later in the year. REUTERS/Siphiwe Sibeko.