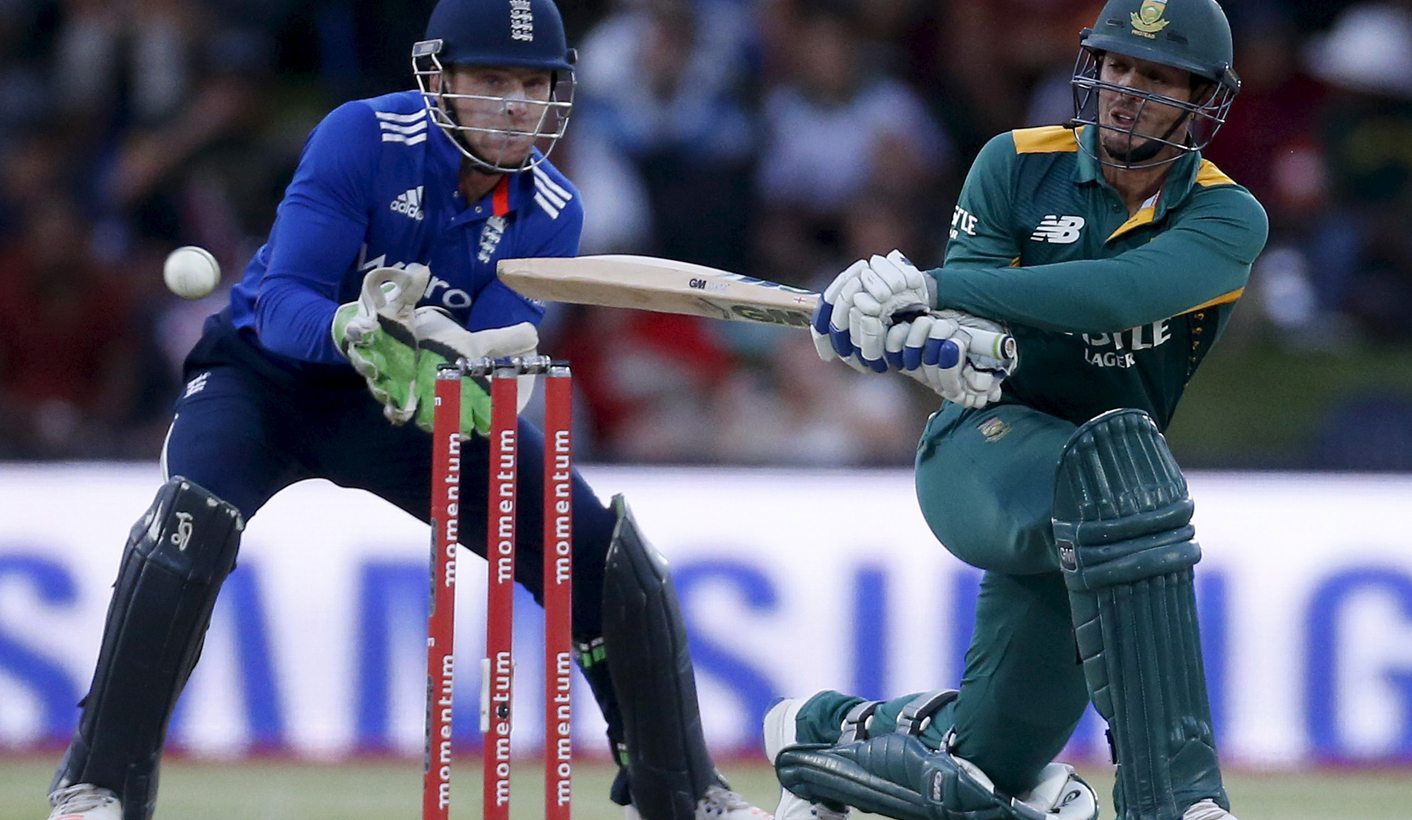 Rain had the final say in what was building up to be an epic ODI between South Africa and England. Quinton de Kock look determined to chase down the 400-run target on his own, or at least until he ran out of partners, but South Africa’s inexperienced bowling let them down on an outfield that was constructed with batsmen in mind. By ANTOINETTE MULLER.

A career-best 138 not out from Quinton de Kock was not enough to help South Africa to victory in the first ODI against England. Rain had the final say in Bloemfontein as England won by 39-runs on the Duckworth-Lewis method as their pursuit of a target of 400 was curtailed by the weather.

When Cricket South Africa announced that they would be holding a water-drive during this match, to collect water for distribution in the parts of the country worst-affected by the drought, this is probably not what fans had in mind. South Africa’s chase was stopped short after 33.3 overs on 250 for five, and while it was shaping up for a potential epic, the weather had other ideas.

Still, the scorecard might have read differently had South Africa’s approach not been so hap-hazard after losing the toss and being asked to bowl first. The Proteas were let down by bad fielding and worse bowling, with the largely inexperienced attack unable to make any impact on a field that had its boundary ropes brought in by about 10 meters. Bloemfontein is actually one of South Africa’s biggest fields, but it is a batsman’s game these days and the outfield made smaller is testament to that. It was the worst fate South Africa’s bowling could have suffered. With Kagiso Rabada rested and Kyle Abbott out with hamstring injury, it was up to Chris Morris, Marchant de Lange and Morne Morkel to do the damage from a fast bowling perspective.

The Proteas continued their strange affliction of not giving Morkel the new ball. De Lange, who had a prodigious debut once upon a time, but struggled since then, was handed the task alongside Morris. Neither was particularly convincing as England got off to a flying start with Jason Roy and Alex Hales cruising along at ten runs an over for the first three overs. It was not until the tenth over that South Africa managed to reduce the assault rate to under eight-runs an over.

When Morkel was eventually brought into the attack, he managed an admirable effort under the circumstances. His figures of 10-0-40-1 meant he had the lowest economy rate of all of South Africa’s struggling bowlers, but was complicit in adding to the extras column. Almost every single English batsman managed to go at a strike-rate of over 100.00. Joe Root was the only player who scored 40 or more, who was below that rate. England’s brutality was only helped along by the damning inconsistency from South Africa’s bowlers. Between them, they conceded 13 extra deliveries through wides and no balls, gifting the England players 2.1 extra overs. While bowling to batsmen in form is one thing, such elementary errors is quite another, and the above factors combined to lead England to a massive total of 399, leaving South Africa with a difficult, but perhaps not impossible target of 400.

Despite losing Hashim Amla early for six, South Africa, or rather De Kock, gave the total a real good crack. De Kock was well supported by Faf du Plessis, but the middle order let them down. Barring the ludicrous dismissal of AB de Villiers which saw Ben Stokes take a catch that can only be described as something bordering on supernatural, the rest of the batsmen were far too liberal with giving away their wickets. However, the wonder catch, which Stokes plucked one-handed out of the sky as it seemed dead-set for sailing over the ropes, did cause some consternation.

The brought-in boundary ropes had been shuffled around in the wind a bit and some argued that the ropes had shifted backwards enough to allow Stokes to get away with his landing, stepping in front of the ropes instead of on them. Such debates perhaps stemmed from the shock factor that such catches create. Different angles show that Stokes was well within his stride as he seemingly turned his hand and the ball into magnets that were rather keen to get to know each other.

As with middle order in the Test team in recent months, lack of substantial partnerships was a real struggle for South Africa. While 400 might seem like an astronomical total, it is not unattainable in this day and age, and De Kock seemed dead-set to score the runs on his own or at least until he ran out of partners.

The game did show, however, that cricket in brightly coloured clothing doesn’t necessarily need to be good quality to be bucketloads of fun, but it does leave South Africa in a slight pickle heading into the second match. Managing Rabada at this stage of his career is critical. Having already bowled himself into the ground during the Test series, South Africa do not want to over-bowl the young man and risk stress fractures. However, they will also be under pressure to pull things back from here. If Abbott does not recover, bringing Rabada in to support Morkel will be a huge temptation, and one South Africa will have to think about carefully. The batsmen, meanwhile, need to give a long think about how much value they place on their wicket. DM