Analysis: Power, patronage and gatekeeper politics in the time of Truman Prince 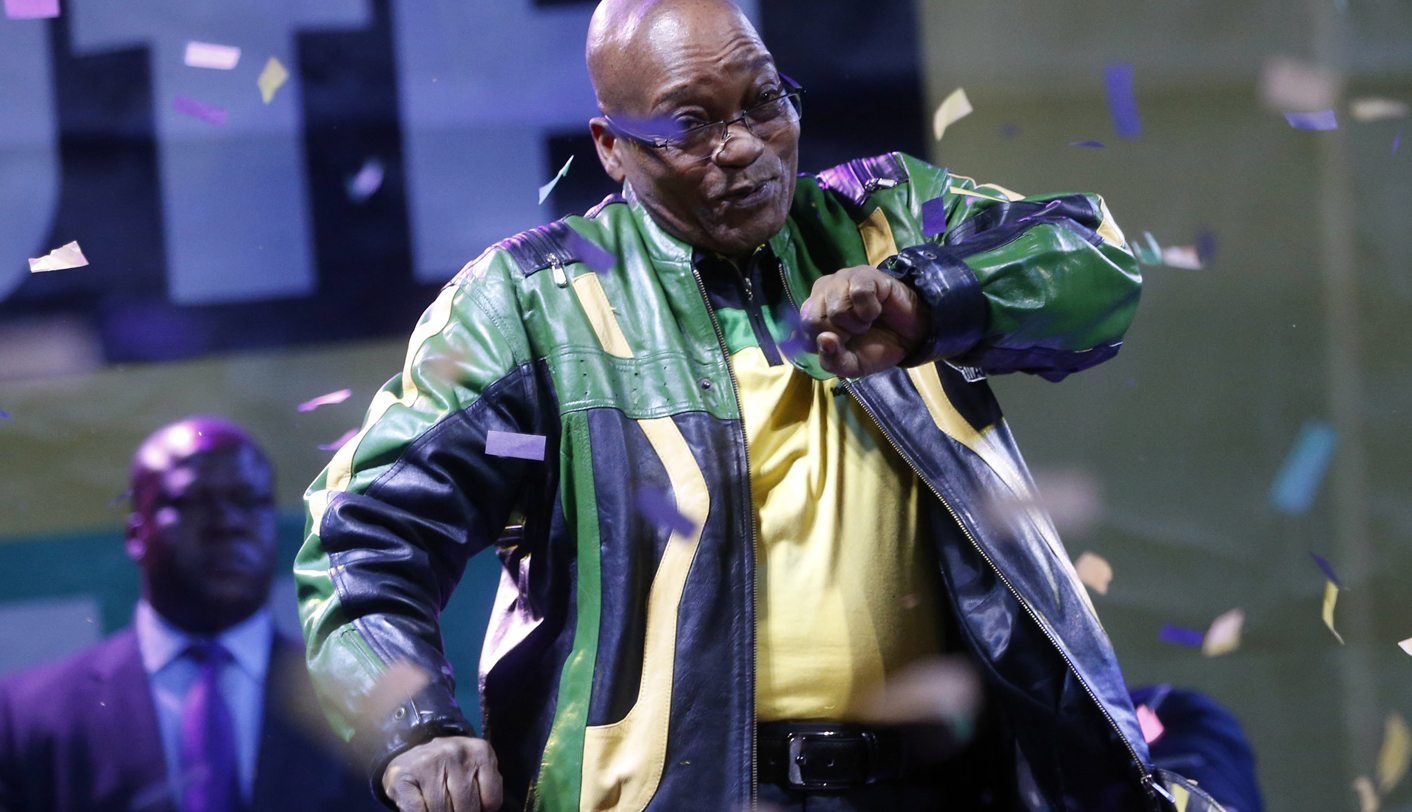 The recent implosion of the ANC in the Western Cape as well as a letter by ANC mayor of Beaufort West, Truman Prince which openly and illegally solicited funds from the Construction Education and Training Authority for the party's 2016 election campaign, are examples of the crony capitalism and deeply rooted patronage networks that are creating bitter factional divisions and “anarchy and decay” in the movement, stifling its capacity to effect socio-economic transformation. It is this white-anting of the 104-year-old party, writes Alexander Beresford, a specialist in African politics at the University of Leeds’s school of politics and international studies, that threatens the quality of South African democracy. By MARIANNE THAMM.

In 2012, at the ANC’s fourth national policy conference that took place in Gallagher Estate ahead of its 53rd Conference in Mangaung, a discussion document titled “Organisational Renewal” was circulated, highlighting one of the party’s major weaknesses. This was identified as “the silent shift from transformative politics to palace politics wherein internal strife and factional battles over power and resources define the political life of the movement.”

This “erosion of character and capacity” and the “hollowing out of the capacity of the democratic state” had to be “reversed urgently and vigorously” if the party hoped to “rapidly improve the pace and depth of transformation” the authors of the document claimed.

The document provided a moment for deep self-reflection and -examination for the movement but instead of turning inwards to seek the source of this critical malaise, the authors blamed, in part, “the influence of a neo-liberal ideological paradigm” and not its true source; corruption, unaccountable leadership, greed, crony capitalism, patronage and rent-seeking politics all exercised at the expense of true transformation and social justice.

It was at Mangaung that President Jacob Zuma emerged victorious, securing a second-term as leader of the ANC when a low-key campaign by Deputy President Kgalema Motlanthe failed to shift the balance of power in the party.

Fast forward to 2013, where an emboldened President Zuma, a veritable Teflon man having slipped out of the coils of justice and moving comfortably through the stench of Nkandlagate, told businessmen at a gala dinner celebrating the ANC 101st anniversary that it would be “wise” for them to support the ANC.

“We’re not forcing people … you can support and be a supporter, but if you go beyond that and become a member, (and) if you’re a businessman, your business will multiply…. Everything you touch will multiply … a wise businessperson will support the ANC … because supporting the ANC means you’re investing very well in your business.”

“I argued one time with someone who said the country comes first and I said as much as I understand that I think my organisation, the ANC, comes first.”

If there is anyone setting the tone or who is the poster boy for all that ails the ANC at present it is its president, our president, Jacob Zuma. And if ANC mayors, provincial leaders, councillors and ordinary members are taking their cue from anyone, it is the man sitting astride the political pyramid.

In February 2015, Alexander Beresford, a lecturer in the Politics of African Development at the University of Leeds and a Senior Research Associate attached to the Chair for Social Change at the University of Johannesburg, published in the Royal African Society journal, African Affairs, an explosive paper, titled “Power, Patronage, and Gatekeeper politics in South Africa”.

In the paper, Beresford argues that “the spread of patronage-based relationships in the ANC has augmented the growth of a volatile form of gatekeeper politics that threatens both the party’s internal integrity and its capacity to deliver upon its electoral mandate.”

Beresford drew on an analysis of ANC discussion documents, key informant interviews with senior party officials, and interviews and observations with delegates from all levels of the movement at the ANC’s centenary policy conference in 2012.

“Gatekeeping is a term commonly used within ANC circles and the term gatekeeper politics is employed here to refer to how political leaders in positions of authority within the ruling party or in public office control access to resources and opportunities in order to forward their own political and economic ends,” writes Beresford.

He argues that there are two interrelated dimensions to gatekeeper politics and what he terms as “spoils consumption” (the use of control over public resources for private ends) and crony capitalism (the use of connections to public authority to facilitate private capital accumulation).

This importance of securing access to public authority through ANC channels provoked intense factional struggles for positions of influence and power within the party. However, this extended, said Beresford, well beyond the predatory struggles of a few powerful elites.

The spread of gatekeeper politics, and the factional struggles surrounding it, could only be understood in relation to issues of everyday political economy and the manner in which “extreme inequalities of class, gender, education, and health severely reduce the ability of ordinary South Africans to survive and flourish.”

This drew political entrepreneurs and their followers towards a private patron – client networks attached to the ANC – as a means to exploit access to public authority in an effort to navigate poverty and inequality.

“The ANC can thus suck in popular anxieties and frustrations over socio-economic transformation, containing them within the confines of patronage-based factional struggles within the party.”

Another feature of this “spoils consumption” was the nepotistic distribution of employment opportunities, which operated on a range of scales.

“A symptom of this has been the perception that political appointments at all levels of public office, including provincial premiers, mayors, and municipal managers, are made on the grounds of political loyalties over competence, and that those on the wrong side of ANC power holders could expect to be ‘purged’ from their public office or their positions within the party,” writes Beresford.

While Beresford adds that “South Africa does not stand anywhere near the precipice of terminal spoils politics; there is no immediate threat of state collapse” and that this form of patronage-based politics has been “compatible with some developmental outcomes (GDP growth, for in- stance)”, the depoliticising of inequalities and social justice at the heart of underdevelopment in South Africa have become hidden from view “while reifying the power of the ANC and reducing the prospects for more transformative forms of political agency to emerge.”

The dynamics of South African gatekeeper politics should, however, be viewed on a broader spectrum that formed “an integral feature of contemporary liberal democracy across the world such as crony capitalism, pork-barrel politics, and the insidious influence of private lobbyists on public political processes”.

Further contextualising the history of gatekeeper politics and corruption in South Africa Beresford reminds readers that these were “central features of the old apartheid regime in South Africa” particularly in the 1970s “as the apartheid system began to disintegrate and the Afrikaner establishment was unable to discipline its followers and prevent the ensuing ‘scramble for personal enrichment’.”

In a continuation of this history Beresford writes that current political leaders who occupied positions of authority in ANC or public service acted as gatekeepers through regulating access to the resources and opportunities that they controlled.

“A volatile politics of inclusion and exclusion emerges and provokes bitter factional struggles within the ANC as rival elites compete for power”.

This can be evidenced by the implosion of the ANC in the Western Cape where two of the party’s top officials were suspended this week and the party in the region has been placed under administration by Luthuli House. Crippling factionalism, corruption and patronage has all but destroyed the party’s capacity to function, not only in opposition to the DA, but in regulating itself.

In relation to the fight for positions on lists for local government Beresford illustrates that it has often been argued that councillor positions at community level were “relatively well remunerated, compared with other forms of local employment.”

“What made the struggle over such positions a ‘life and death’ matter, however, was that they would also be utilized to distribute spoils to their clientele. As one senior party official explained, this practice was particularly pronounced at local levels because state-sponsored development projects were required to use local labour and local businesses to complete the projects, and the councillor would have a large influence over this”.

The ANC itself is more than aware of what ails it. It has attempted, over the years, to implement various strategies to control the rot setting up an Integrity Commission, undertaking to implement a strategy that members undergo probationary periods before taking office and that members be given “political education.”

However, all these measures, writes Beresford are undermined “if senior ANC leaders are seen regularly to flout the very standards they call upon ordinary members to follow.”

Patronage networks, crony capitalism, and factional struggles are, says Beresford, inexorably bound up with the development of capitalism and can be witnessed to varying degrees in even the most consolidated liberal democracies and were not “the ineluctable way in which ‘Africa works’”

But all of these issues, he warns “will remain a predominant feature of South African politics in the near future.”

In conclusion Beresford writes that the domestic forces capable of resisting this, within the ruling party and opposition parties “must confront the fact that the elites dependent on nefarious gateways to public authority to secure their ability to accumulate wealth are unlikely to change their spots quickly, nor are they likely to concede power easily.”

“For ordinary citizens, reaching out to patron–client networks may well be a vital means of treading water, but we must be mindful not to celebrate this ‘agency in tight corners’, which ultimately does not challenge the roots of social injustice that lie at the heart of South Africa’s unfinished liberation.” DM