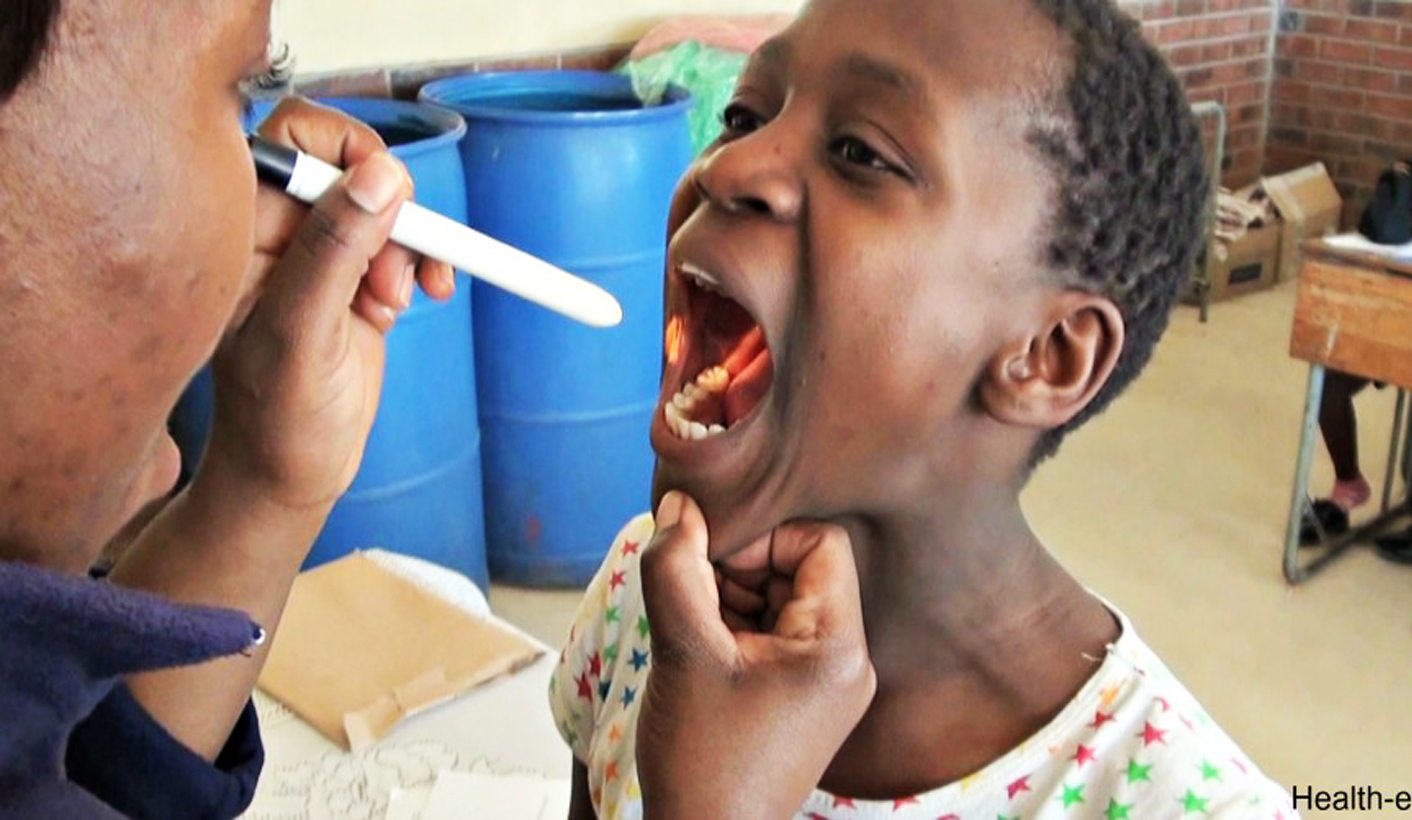 Facing a R9-billion shortfall just to meet salary demands, provincial health departments are freezing posts. Whether doing so openly in memos or hiding it between the lines of spiralling bureaucracy, these staff freezes are one of the most significant threat to healthcare, writes LAURA LOPEZ GONZALEZ for HEALTH-E NEWS.

For Cwengile Lubazo, the world is small and has most often been seen from the back of his mother, Kunjulwa, who is struggling more and more under the weight of her growing boy who is almost a man. Born healthy, Cwengile began having seizures at the age of three. The successive fits that left him paralysed on the right side of his body and unable to use his legs also cut off oxygen to his brain, causing brain damage.

On days when he and his mother used to visit the clinic, Kunjulwa would dress Cwengile in a smart white button-up shirt and jeans before hoisting him onto her back. They would travel down and up the rolling hills outside Mthatha, past neighbour’s yards and cattle, and the occasional dagga field.

To control his seizures, Cwengile takes an anti-epileptic drug that can cause a side effect known as gingival enlargement in which a person’s gums can grow over their teeth. As Kunjulwa can no longer carry the 15-year-old boy on her back, Cwengile does not go to the clinic often anymore. With no outreach services in the area, no one diagnosed Cwengile with gingival enlargement, which can interfere with eating and speaking, and force crowded teeth out of alignment. With just three dentists working in the area of about 440,000 it is unlikely a child like Cwengile will get the medical and dental services needed to correct the condition.

Lungile Butshingi (not his real name) is one of these dentists. In theory, dentists like Butshingi do not just take care of teeth. They also act like an early warning system, spotting the oral signs of everything from viruses to conditions like Cwengile’s overgrown gums and helping to refer patients to doctors early.

“That’s in theory,” said Butshingi who asked not to be named. “Oral health nationally is a crisis. Rural populations in this country do not have access to the oral health services that they should.”

Butshingi said that access to oral health care for people living with disabilities like Cwengile, is almost non-existent. Only one hospital in his area offers basic oral health services and patients cannot even receive fillings or what dentists call “restorative” services.

“In this hospital, there has never been any kind of restorative services… just extraction. That’s what I did the whole of last year because there isn’t enough equipment,” said Butshingi, who added that without more dentists, dental supplies expire unused on clinic shelves. “We are running a glorified dental butchery.”

“Our hospital’s organogram has three approved posts for dentists, but there was not even one single post for my hospital listed,” said Butshingi, who was ultimately able to advocate for a dental position to be opened at his hospital.

The Eastern Cape is among the seven provincial health departments allegedly instituting “moratoria” to prevent or strictly control the filling of posts, according to research by the Rural Health Advocacy Project (RHAP). According to RHAP, every province but Gauteng and the Western Cape have instituted these kinds of hiring freezes.

According to RHAP budget expert, Daygan Eagar, provinces have been forced to implement “moratoria” to cut costs, driven largely by dramatic eight percent year-on-year salary increases for staff throughout the last decade. Meanwhile, provincial health budgets have only grown about two percent annually during the same period. Employee compensation now accounts for about 65% of provincial health expenditure, according to Eagar.

“Virtually every province is affected by moratoria and certainly the way things are looking, it’s going to be increasingly common throughout the country,” he warned. “What’s happening now is probably the most significant threat to the provision of healthcare in the country.”

Practically, moratoria mean posts are essentially “frozen” – either officially via memos or unofficially. In the case of “unofficial moratoria,” some appointments are delayed so long – by, for instance, requiring permission from provincial treasuries or premiers – that prospective candidates lose interest. Alternatively, positions are left vacant until they are eventually deleted from electronic human resource systems.

“A few years ago, we called out the Eastern Cape for having a moratorium because they’d sent out a circular, and it emerged that KwaZulu-Natal also had a moratorium on the appointment of staff they just didn’t call it that,” he added. “There’s good reason why provinces wouldn’t want to name it.”

In Mpumalanga, the Treasury and Office of the Premier also “play an advisory role for all appointments across provincial departments,” but Mpumalanga Premier, David Mabuza, has exempted the department of health from hiring freezes placed on other departments.

Meanwhile, rather than apply a blanket moratorium, the Western Cape has devised a management system to prioritise appointments within a tight budget. Health facility heads appoint personnel, allowing managers to prioritise appointments based on needs. According to the RHAP, this type of decentralisation and prioritisation could help departments make the most of a bad situation.

“The department prioritises posts for filling to ensure we leverage the system for best impact,” said Western Cape Department of Health Spokesperson, Marika Champion. “Each manager has an up-to-date information system allowing decentralised decisions, based on post priorities and available funds.”

According to Champion, this system has allowed the province to avoid accruing debt. This kind of accrued debt has led in the past to the non-payment of suppliers, lawsuits and billions in unpaid debt in provinces like the Eastern Cape and Gauteng, according to Eagar.

“(Accruals) carry over into the year and you have to pay the invoices at some point or you get sued so it’s taken from the budget that was meant for service delivery in that year,” Eagar explained. “The budget becomes smaller in reality, but in practice, spending continues as if the whole budget was there and it just kind of snowballs.”

And the era of Treasury bailouts for over-spending provinces may be over, according to the latest Medium Term Budget Policy Statement, which says there will be no funding to expand public sector employment in the next three years. Departments will need to shift money from goods and services budgets – or those used to pay for purchases of medical supplies and equipment for instance – to meet compensation commitments. As two of the biggest public sector employers, health and education departments are unlikely to grow and may in some cases shrink, Eagar added.

The North West is the only provincial department of health to admit to an official moratorium. In August, one district hospital doctor reported that a clinical manager post had been vacant for two years and a district hospital was allegedly running with just one social worker. Meanwhile, the hiring freeze is affecting both staff and patients at the local psychiatric hospital. “Our staff morale is low,” said one nurse who added the hospital had just two psychologists as of last August. “The nurses prefer to participate in moonlighting because they know they will not get paid for overtime. This has led nurses to abuse their sick leave days.”

An average nurse makes about R11,440 a month before deductions, according to Democratic Nursing Organisation of South Africa (Denosa) President Simon Hlungwani. He added that in the most recent public sector negotiations, workers received a real increase just one percent above inflation. For Hlungwani, the real question is not whether health workers are paid too much, but whether budgets are managed: “Nurses work under harsh conditions. Sometimes two nurses perform the work of four or five nurses due to gross staff shortages because of a pointed reluctance to employ adequate staff complements,” he said. “If there are only three nurses in a 20-bed maternity unit and 10 patients become critical at the same time, whoever dies because there was no hand to help her – that blame is squarely put on the three nurses.”

“This freezing of hiring of personnel is driving nurses slowly out of government employ, but it also points to a human resource system that needs a serious revamp so that it is able to plan accordingly,” Hlungwani adds.

Planning may be the only way to weather the storm, according to Eagar, who adds that 2016/17 health budgets are already R9 billion short of the forecasted need to sustain salaries. While the National Health Insurance will help private resources to fill this gap, the rational prioritisation of posts at a local – not provincial level – will be critical. Given the need in places like OR Tambo district in the Eastern Cape, rural areas must be protected from blanket hiring freezes.

As the South African Medical Association (SAMA) warns of massive budgets cuts and more austerity measures, Eagar adds it is time for the National Department of Health and the National Treasury to help guide provinces in protecting posts. The Northern Cape and Limpopo departments of health and the Department of Public Service and Administration had not responded to requests for comment at the time of going to print. DM

Photo: Oral health screenings can help dentists and doctors pick up the signs of underlying conditions but the Eastern Cape’s OR Tambo District, there are just three dentists for about 440,000 people. The provincial department of health advertised just five dental positions in the whole province last year.