Cricket: Rabada’s diamond will shine, but SA must gua...

Cricket: Rabada’s diamond will shine, but SA must guard against stress fractures 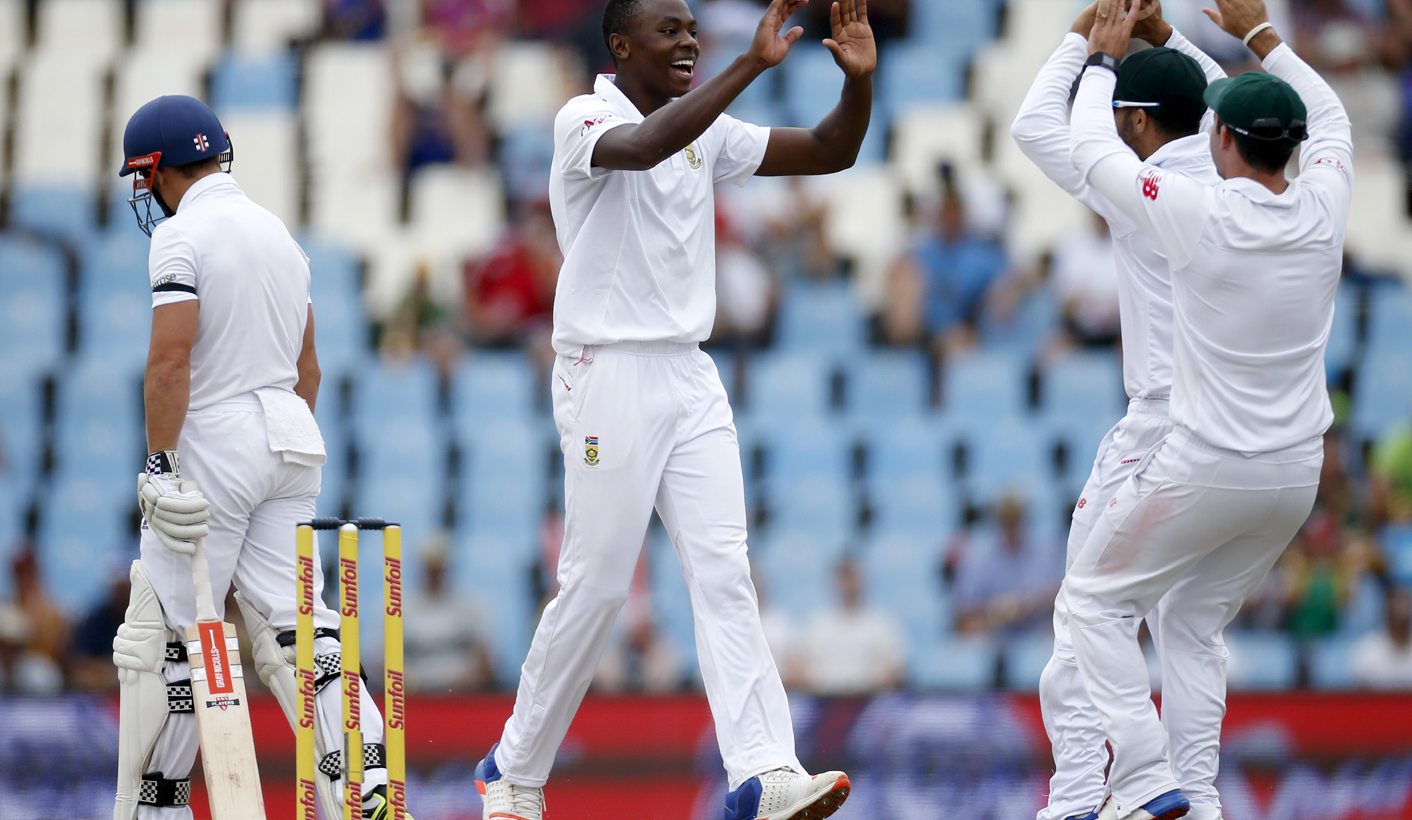 Despite Kagiso Rabada saying he does not think he has arrived on Test cricket’s stage just yet – the world certainly thinks he has. But with great bowling comes great dangers. How Rabada’s managed in these early part of his career will be critical. By ANTOINETTE MULLER.

That’s the (slight adjusted) song that the group of South African supporters calling themselves “AB’s Babies” had sent out echoing across the Wanderers when young Kagiso Rabada picked up his first five-for in Test cricket. It was a special moment, and the first of many to come. But not many would have expected the next special moment to come just a week later. At Centurion over the weekend, Rabada became the youngest South African to take seven wickets in an innings, and bowled himself into the ground to help dig his team out of a hole.

Some would have been slightly surprised, but anyone who watched him rip apart Australia in the semi-final of the Under-19 World Cup, when he took six for 25, would have known this was coming. Since making his full international limited overs debut, Rabada has taken a six-for and a hat-trick in limited overs, and has looked like an experienced bowler who had been playing this international stuff for years.

Never in recent memory, if ever before in South Africa’s history, has a 20-year old led the attack with such maturity, control and aggression. Rabada is wise beyond his years, both on the field and off it, and he is if managed correctly, he will have a long career ahead of him. It is easy to get drunk on his success, but young fast bowlers are a curious and delicate bunch, and after racking up the overs on Sunday, Rabada looked visibly shattered, but the man himself insisted he was fine and he “could have bowled another ten overs”. For a youngster, still new to the game, getting tired is just normal.

While the innocence of youth is endearing, it does come with a caveat. Over-bowling quicks can be a real problem and lead to injuries that cause long-term problems. This is perhaps one of the biggest reason why, to some people’s surprise, Rabada was omitted from the first Test against England in Durban. He already suffers from scoliosis, a condition which could be worsened by a stress fracture of the back, an injury which has become far too common for young fast bowlers in recent years.

A fast bowler’s delivery and follow-through being at the heart of the problem and while Rabada does have a fairly smooth and natural action, nothing about bowling is natural. There is no part in daily life where your body experiences that kind of motion or impact, thus, the act of bowling puts incredible strain on a young body that is not used to it. Expert chiropractors believe that the male spine does not mature until the early 20s, not ideal if one is already suffering from an abnormality. Most physiotherapists believe the best solution is to just get on with it and bowl, but there is a fine line between just bowling and being over-bowled. Some coaches and former fast bowlers consider stress fractures in the early years to simply be part and parcel of the gig, but for some injured players this can be career-ending. Pat Cummins from Australia and South Africa’s Marchant de Lange are two youngsters who have simply not regained their top form since getting injured in their early years. These injuries might not be entirely preventable, but one theory is that the more you bowl (at different intensities) the easier it will become. That’s where Rabada will need to be managed carefully. Good stretching, strengthening his core and toeing the fine-line between getting overs under his belt, and not being over bowled will all be key in Rabada’s development as a top bowler.

He has just over 570 first-class overs under his belt and has racked up the mileage in the last two Tests. In both Cape Town and Johannesburg, he bowled more than any of the other quicks and during the New Year’s Test he bowled the most overs he has ever bowled in a first-class innings. In the first innings in Centurion, he came close once again with 29 overs. His successes might be sweet, but they’ll leave a rather bitter aftertaste if they come at the expense of a fruitful career because he was over-exerted.

After the Test series, he will probably play at least part of the limited overs series against England and Australia and will, in all likelihood, be part of the World T20 squad for India in a few months. Then, there will be a slight break before he is thrown right back into the deep end with a series against New Zealand. In that break, going to find an English county would not be the worst idea. A team with coaching staff who understand fast bowlers, their development, management and the trouble with injuries will do wonders for his development. Not only will this help him get some much needed overs under his belt, but it will go a long way in refining his skills as a bowler. But, even more importantly, it is critical that when he plays Test cricket for South Africa, he is managed and backed up by his fellow bowlers. To do that, South Africa might have to consider playing an extra bowler to share the workload around a little bit. But, fortunately for them, that’s a worry they only need to have in six months’ time. DM