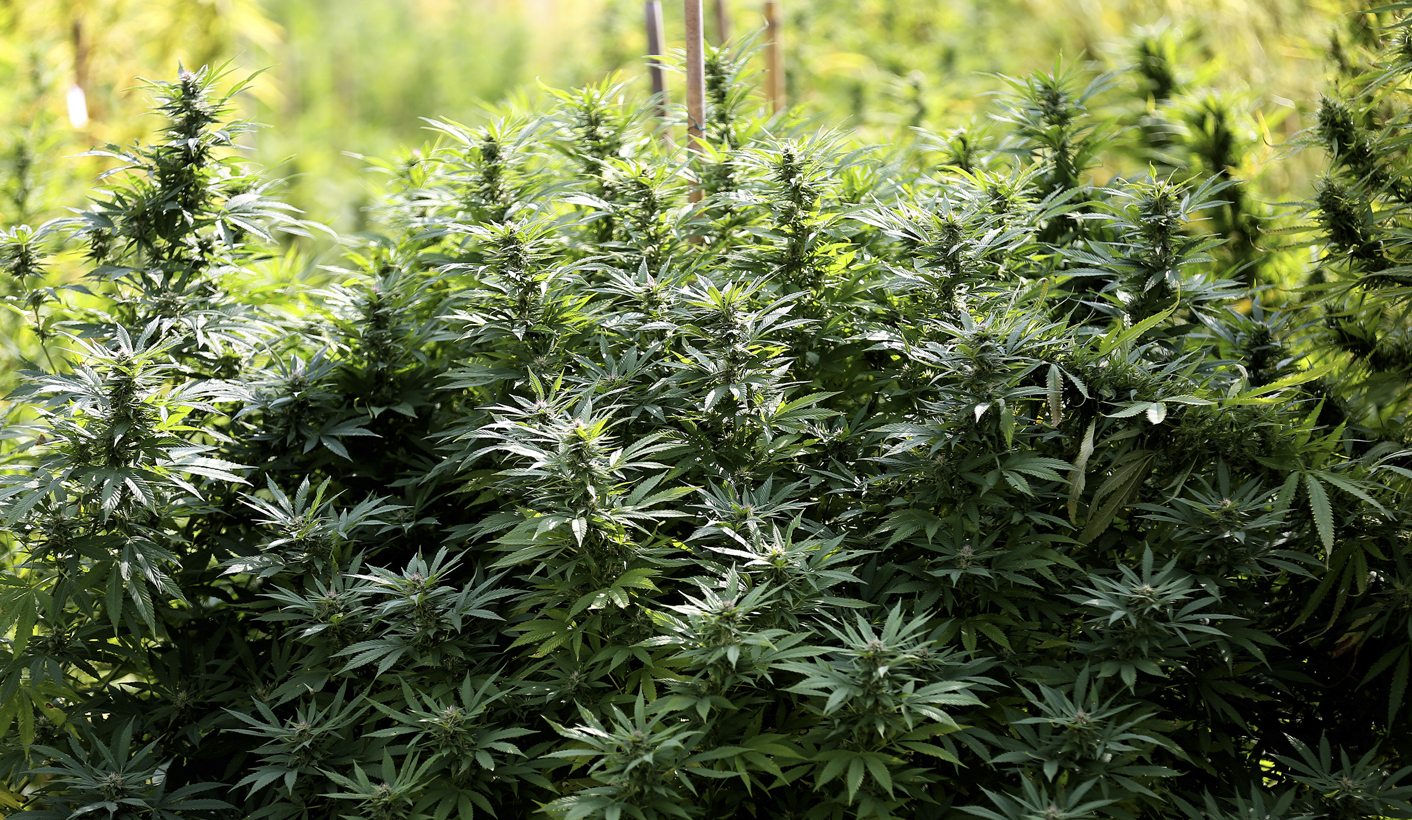 In a policy brief published by the Medical Research Council on January 5, the medicinal value of cannabinoids was officially – and historically – recognised in South Africa. Three days later, the president signed into law the Medicines and Related Substances Amendment Act of 2015, a piece of legislation that theoretically allows Big Pharma to feed our dagga to us in pill form – or, if we like, through a straw. KEVIN BLOOM reports.

To begin, a small story that would grow up one day to be a big story. The year was 1969, the place was Harvard University, and the story was fighting for its young and neglected life. It had come into the world in 1967, when a man by the name of Lester Grinspoon decided to prove that marijuana was indeed “a very harmful drug”, and to demonstrate to the “foolish” youth the nature and degree of the harm. Given that Grinspoon was a senior psychiatrist at the Massachusetts Mental Health Center and a staffer at the Harvard Medical School, nobody had much doubt about the story’s ending. But in July 1969, with Grinspoon as the chief source, an article appeared in the Harvard Crimson under the title, “Harvard Doctor Says Pot Harms Less Than Alcohol”.

In 1971, Grinspoon’s first book, Marihuana Reconsidered, was published. The book, a scientific refutation of much of the received wisdom, was reissued in 1977 and again in 1994, by which time it had become something of an academic classic. In 1993, with the “h” now replaced by the more standard “j”, Marijuana: The Forbidden Medicine was released. Between 1993 and 2014, a total of 23 states in the USA would legalise the use of a product that, while it differed from marijuana in name only, had a secret and magical ingredient that marijuana apparently didn’t. The name of the product?

And so our story, which should’ve died in the gutter before its second birthday, was now 47, a middle-ager with a prizefighter’s past and a celebrity billionaire’s future. In 2014, although the Control Substances Act of 1970 still classed cannabis as a federally prohibited “drug” across the United States, five states had instituted a legislative environment in which this law did not even apply to recreational use. Also in 2014, the New York Times ran an unprecedented piece of journalistic advocacy called “High Time: An Editorial Series on Marijuana Legalization“. To cap it all, national polls were showing that 54% of Americans backed the removal of cannabis from the letter of the aforementioned federal law, a number that would climb to 58% in 2015.

In January 2016, following over a century’s worth of “dagga” stigmatisation – culminating, in the last few years, in fits of adolescent giggling from our legislature and statements of profound ignorance from our judiciary – the story finally made landfall in South Africa. Two weeks ago, the Daily Maverick received an email from Nandi Siegfried, chief specialist scientist of the Alcohol, Tobacco and Other Drug Research Unit of the SA Medical Research Council (SAMRC), in which a link was provided to the Policy Brief on Cannabinoids for Medicinal Use, published on 5 January. It was, by all accounts, a brand new day for the country.

Here’s what we read on page one of the brief, where mention is made of the introduction of the Medical Innovation Bill to parliament in February 2014: “Further legislation on this issue is likely to come before the national parliament in the future. Up-to-date synthesis of the evidence underpinning the medicinal use of cannabis is required to inform debate and policy-making.” And here’s what we read in the sub-section entitled “What is Cannabis?”, the same sub-section where we are reminded that ingestion of the plant remains illegal in South Africa: “Throughout the ages, many cultures have used cannabis as a medicine.”

To be clear, the SAMRC is a quasi-governmental body protected by an Act of Parliament – Act No.58 of 1991 – whose objective is “to promote the improvement of the health and the quality of life of the population of the Republic…” It does this by undertaking research of its own accord, or by undertaking research “on behalf of the State or any other authority…” In the case of the policy brief under discussion, while we don’t know exactly who requested the research, we do know – because it’s the direct result of a parliamentary bill – that what we’re dealing with here is bona fide officialdom.

So what does the brief say? In summary, the SAMRC have given cannabinoids a “moderate” score when it comes to treating both “chronic pain” and “spasticity due to multiple sclerosis or paraplegia”. This is potentially better news for sufferers than it sounds, as “moderate” is the second-highest rating from a list of four that runs from “high” at the top to “very low” at the bottom.

As Nandi Siegfried explained to the Daily Maverick: “Let me just tell you that it’s usual to find low quality evidence and it’s uncommon to find high quality. Moderate is good, it means we have greater confidence in the findings.”

It’s a small start, but a momentous one – while much from the growing body of scientific evidence regarding cannabis’s medicinal properties is absent from the brief, bureaucratic South Africa has now conceded something it has never conceded before. Dagga, it turns out, is not just a plant that makes people dof.

2. For the even bigger winners (hint: not you)

Before we get ahead of ourselves, however, we should probably consider something else that happened in the first few weeks of 2016. In the Government Gazette of 8 January, three days after publication of the SAMRC’s landmark brief, it was announced that President Jacob Zuma had assented to Act No. 14 of 2015: the Medicines and Related Substances Amendment Act. This was the same piece of legislation regarding which an “urgent letter” had been sent to the president, the minister of health, and members of the national council of provinces in October 2015, its subject line reading as follows: “Bill 6 of 2014 must be stopped to end Medical Apartheid and prevent further Biopiracy in South Africa”.

Numbered among the signatories of the letter were ten leading traditional health practitioners, a representative from the Traditional & Natural Health Alliance, and a representative from the Traditional Healers Organisation. The letter claimed to speak on behalf of “tens of thousands” of South Africa’s traditional healers, a group that serviced “over 80%” of the South African population. One of the letter’s more serious allegations was that the state’s law advisors, in contravention of the Traditional Leadership and Governance Framework Act of 2003, had hoodwinked South Africa’s traditional healers – they had informed them that Bill 6 of 2014 (which was to become Act 14 of 2015) “did not deal with traditional medicines,” when in fact a briefing by the health department three months prior to this statement had named the regulation of traditional medicines as the entire point of the legislative amendment.

Then the letter, a copy of which is in the Daily Maverick’s possession, got real: “This Bill, should it become law, will be the enactment of twin evils: both exposure of our people to more chemicals, in the form of synthesised, concentrated isolates of traditional medicines marketed by foreign-owned interests as pharmaceutical products; plus the effective removal of most Natural and Traditional Medicines from the control and use by Health Practitioners and ordinary citizens.”

And also: “That this disastrous development is almost certain to take place is evidenced by the fact that only such rich and powerful ‘Big Pharma’ corporations will have the resources to patent and register synthesised, concentrated and ‘scientifically tested’ pharmaceuticals derived from some of our own already well-known Traditional plant based medicines.”

What does the above have to do with the SAMRC policy brief that recognises the medicinal properties of cannabinoids? A possible answer has been suggested by a blogger who publishes under the nom de plume “Dagga Dissident” – and it concerns everybody’s favourite multinational agrochemical corporation, Monsanto.

As the Dagga Dissident alleges and Bloomberg confirms, a man by the name of Karsten Uwe Harald Horst Wellner is currently the chief executive officer of both Ascendis Health Ltd, a JSE-listed “health and care brands company” with revenue of R2.8-billion, and Efekto, who act as local agents for the glyphosate-based weed killers Roundup and Kilo Max. As the Daily Maverick pointed out in the first article of this series, Kilo Max was the herbicide that the South African Police Service used when they sprayed 500 hectares of Eastern Cape dagga fields in February last year. The police, we stated, claimed that the dose was harmless and minimal, but eyewitness reports by journalists and other interested parties claimed otherwise: maize crops destroyed, locals falling ill, goats having miscarriages after drinking contaminated water.

Which proves nothing, of course, except that there are tight links between the company that spent R350 million on acquiring Solal – “the leading South African health player specialising in preventive and anti-aging medicine” – and the company that makes weed killers that destroys South Africa’s crops. In July last year, although Ascendis Health MD Marion Burgess denied that it was Efekto’s glyphosate that was sprayed on those Wild Coast dagga fields, she did not deny the association between Efekto and Ascendis. “Pharmaceutical factories are not allowed to manufacture pesticides or herbicides in the same facility,” she said.

Thank heavens for that. And thank heavens too that Big Pharma in South Africa is so honest and transparent, otherwise we would have to take the traditional healers at their word. “Bill 6 of 2014 promises to introduce another round of subtle yet profound imperialistic domination,” they wrote in their letter last October to President Zuma, “this time of our ancient and traditional health resources and of our bodies, through the enforced imposition of ‘an imperialistic pharmaceutical health regime’.”

It will be remembered that in November last year, a referendum in the US state of Ohio rejected a constitutional amendment to legalise marijuana – not because of the inherent conservatism of the mid-west electorate, but because of a fear of monopoly control. Forty-eight years after Dr Lester Grinspoon changed the world by deciding (and failing) to prove the harmful effects of the plant, we have reached the point where the battle for hearts and minds is all but won; the new battle, the inevitable battle, is with the multinational corporations whose mission it is to regulate, own and restrain.

In the January 2016 policy brief of the SAMRC, South Africa officially recognised the medicinal potential of a plant for which we have long been celebrated throughout the world. In the Medicines and Related Substances Amendment Act of 2015, a law that allows companies like Ascendis to feed our dagga to us in pill form (or, if we like, through a straw) was officially passed.

Thing is, officially, how are Big Pharma and government going to spin their intention to do thousands of small growers the length and breadth of this country out of their monthly incomes? How can monopoly control be exerted over a plant that grows wild in every twentieth (okay, every tenth) backyard in South Africa? DM

Photo: Cannabis plants are pictured in a state-owned agricultural farm in Rovigo, about 60 km (40 miles) from Venice, September 22, 2014. REUTERS/Alessandro Bianchi

Collagen supplements: why the hype?