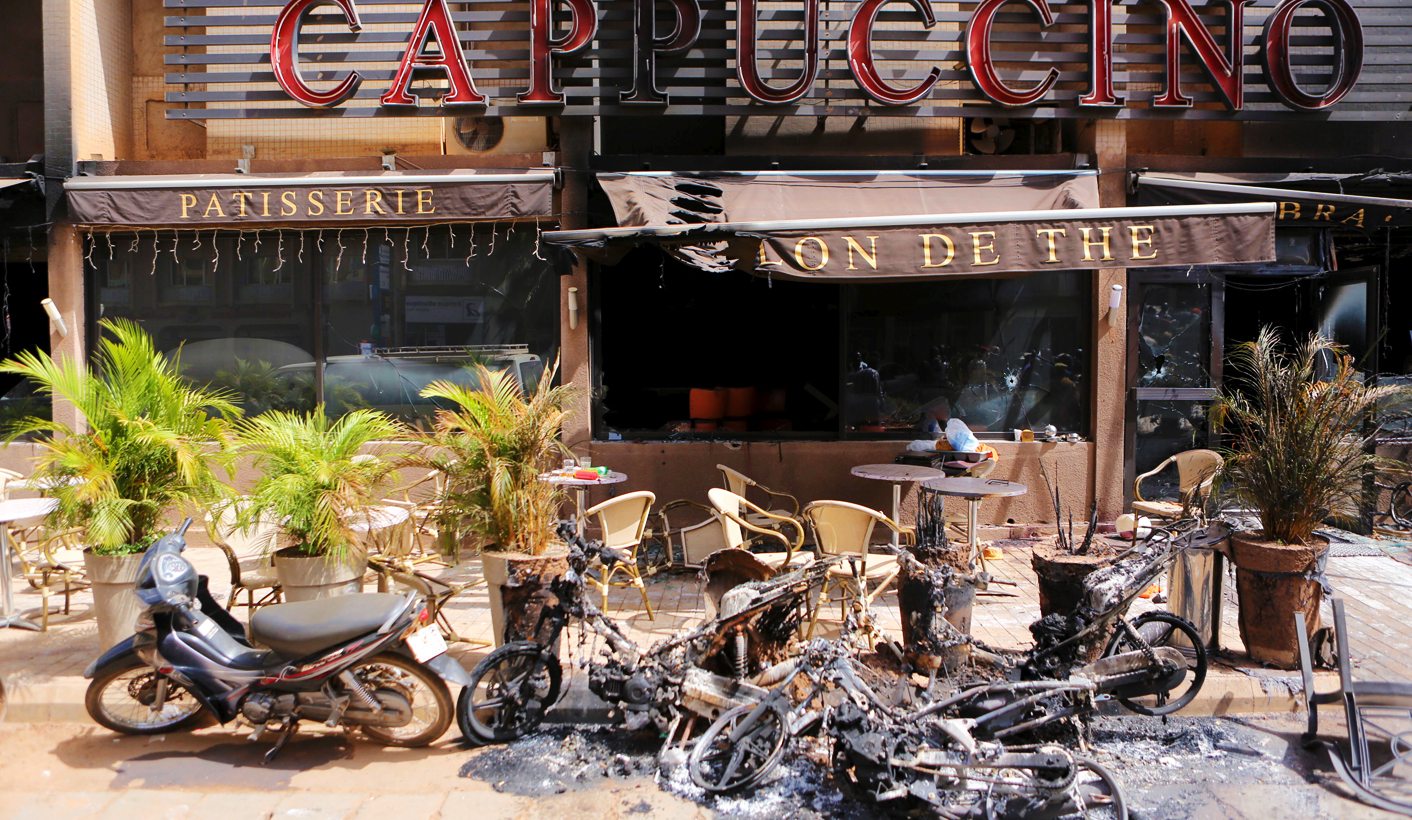 The growing threat of Islamist activities in West Africa is complicated by increasingly blurred links between militant and criminal activities. Such collaboration of crime networks carries a strategic value for African Jihadists like those who attacked the Splendid Hotel and the adjacent Cappuccino Cafe, in central Ouagadougou over the past weekend. By OLGA BOGORAD.

On January 15, the city of Ouagadougou- the heart of a western African country, Burkina Faso, which has remained relatively immune to the threat of radical Islam in recent years – was hit by elements affiliated with global Jihad in a spectacular and a well-coordinated assault.

During the evening hours of January 15 the Splendid Hotel and the adjacent Cappuccino Cafe, both located in central Ouagadougou, came under attack by four armed Islamists. The gunmen opened fire on the café, and then stormed the hotel, taking dozens of people hostage. The joint rescue operation by local forces and French special troops, who were deployed to the scene, stretched the entire night and the morning hours of January 16, leaving three assailants killed. The fourth perpetrator managed to escape to the nearby Yibi Hotel, and was eliminated after the security forces had surrounded the building. The 15-hours siege left at least 28 people killed, among them foreign citizens, including an American missionary, two Swiss, four Ukrainian, two French and six Canadian nationals. According to Burkinabe officials, 126 people held hostages during the siege were released in the rescue operation. In a separate incident, which preceded the attack in Ouagadougou, 20 armed gunmen killed one security officer, and a civilian near Tin Akoff town, close to the Malian border.

While the security operation to release the hostages was still underway in Ouagadougou, an Australian couple was kidnapped in the northern town of Djibo, near Baraboule not far from the border with Mali during the morning hours of January 16. In a statement issued by AQIM-affiliated Malian Islamist group, Ansar Dine, a few hours after the attack on the Splendid Hotel, the group’s spokesman confirmed that the hostages were alive, and claimed that AQIM’s Saharan branch “Emirate of the Sahara”, led by Abu Yahya al Hammam, was behind the abduction. He further stated that the successfully executed operation against a hotel in Ouagadougou was carried out by the same “mujahedeen”. It’s worth noting that the AQIM’s Saharan branch has been involved in kidnapping of Westerners for ransom purposes for years, including the abduction of Swede, Johan Gustofsson, South African, Stephen McGowan, in northern Malian city of Timbuktu in 2011, and Swiss national, Beatrice Stockly, also in Timbuktu, on January 8, 2016. Another group’s hostage, Dutch citizen Sjaak Rijke, who was captured during the same 2011 incident, was rescued by French forces in spring 2015.

Shortly after the beginning of the Splendid Hotel siege, AQIM issued a statement published by its media wing al-Andalus, confirming that al-Mourabitoun, an Islamist group operating in Mali, perpetrated the attack on the Splendid Hotel in Ouagadougou. The statement was later confirmed by a broadcasted live audio message by the perpetrators while the hostage situation was still ongoing. In the message, titled “A Message Signed with Blood and Body Parts”, the Islamists reiterated the group’s loyalty to al Qaeda’s leader Ayman al-Zawahiri. This fact is especially notable given the increasing attempts by Islamic State (IS) to lure al-Qaeda’s African franchises to switch allegiance and join the group.

Al-Mourabitoun, which was established in northern Mali as a result of a merger between the defected AQIM’s Katiba Al-Mulathameen (Masked Brigade) and the Movement for Unity and Jihad in West Africa (MUJAO), which split from al-Qaeda’s northern African branch in January 2012, has longstanding ties with AQIM. The Katiba Al-Mulathameen, led by notorious Mokhtar Belmokhtar, was one of AQIM’s central brigades (katibas) operating in northern Mali since the early 2000s. The major breakdown in the relations between the two groups occurred in late 2011, after the brigade defected from AQIM due to internal power struggle between the group’s leaders in spite of al-Qaeda Central’s mediation efforts.

While both organisations continued to operate in Mali’s north, Belmokhtar’s group, comprised of members from various local communities, has quickly gained prominence due to extensive smuggling activities which quickly spread beyond Mali’s borders. The thriving smuggling business, coupled with multiple kidnappings for ransom, has significantly strengthened al-Mourabitoun’s operational capacity, while AQIM has been significantly weakened by aggressive Algerian counterinsurgency effort and has failed to register any significant achievements over the recent years.

An important breakthrough towards the renewal of cooperation between the rival al Qaeda’s factions was recorded following the deadly Radisson Blu Hotel siege in Mali’s capital Bamako on November 20, 2015, which was jointly claimed by AQIM’s Saharan branch and al-Mourabitoun. However, the major advance came in early December, after AQIM’s leader announced a merger with al-Mourabitoun. It should be noted that the role of Belmokhtar in negotiating the reunification of the ranks with Abdelmalek Droukdel, with whom he has had very tense relations, remains unknown.

While there are conflicting reports regarding the fate of Belmokhtar, who has been previously declared dead on several occasions, including by al-Qaeda, to which he remained fiercely loyal, his shadow is looming over the attack in Ouagadougou. Belmokhtar, who planned and successfully executed numerous kidnappings and high-casualty attacks, including attack on In Amenas gas plant in Algeria on January 16, 2013, and the Radisson Blu Hotel siege in Bamako on November 20, 2015, has demonstrated overwhelming operational capabilities to mastermind large-scale assaults. His ability to establish ties with local criminal networks among Sahelian Tuareg tribes and Fulani herdsmen, which are cooperating with Islamists for pragmatic reasons, likely facilitated the successful execution of the attack. The engagement of local criminal cells in weapon and human smuggling, as well as their control over territories throughout West Africa and the Sahel, allow them to provide Jihadists with necessary logistics, such as arms and safe path to the target.

It should be noted that Burkina Faso has remained a relatively stable country, both in terms of political and security situation, while witnessing minor militant activity, mainly in northern regions along the border with Mali. Little is known about al-Mourabitoun’s operational infrastructures in northern Burkina Faso. That being said, there are strong indications that the group has become increasingly active in Mali’s Mopti region, potentially expanding its theatre of operations along the border with Burkina Faso. The spill-over was likely the result of the ongoing French Operation Barkhane, which inflicted a heavy blow on Jihadists’ ability to operate in Mali’s northern regions and forced them to look for additional sources of funding instead of those lost, including along Mali’s porous southern borders. The protracted security vacuum in the border region between the two countries, coupled with scarce security presence in Burkina Faso’s northern rural and outlying areas, has allowed the underlying Islamist threat to eventually transform into a bloody reality.

While there remains a possibility that these kidnappings were carried out by local criminal elements and later handed over to al-Mourabitoun, a common practice in various African countries where the link between the militant and criminal activities is often blurred, such collaboration of crime networks carries a strategic value for African Jihadists.

First, it facilitates their ability to operate in previously unexploited areas, which are usually controlled by local ethnic groups, making these ties a valuable asset for Islamists seeking to expand their influence across sub-Saharan countries. Second, as noted above, local allies provide Islamists with hideouts, weapons and intelligence regarding possible targets, allowing them to rely on existing infrastructures instead of spending time to establish new ones. As to the attack in Ouagadougou, the sophistication of the assault indicates significant preparations, both in terms of gathering intelligence on future target, obtaining weapons and transportation of perpetrators to the capital. Therefore, it is likely that the support by local networks, garnered prior to the attack, was the main factor behind its successful execution.

Furthermore, while some researchers argued that the assault was intended at further deepening the recent political crisis in Burkina Faso, AQIM or Malian Jihadists have yet to express interest in overthrowing the country’s regime or any involvement in its internal affairs. The attack in Ouagadougou was rather the matter of opportunity, facilitated by the group’s ability to utilise local ties in order to successfully complete the operation. The increased media attention emanated from the long lasting siege has quickly returned the group to the focus of the international attention, serving as a painful reminder of the enduring Jihadist threat. As Islamists continue their efforts to expand operations throughout West Africa, the countries beyond Mali’s southern borders seem to be increasingly exposed to a new nightmare.

Thus, the recent siege in Ouagadougou has proved that Burkina Faso is now affected by radical Islam, while spill-over of Malian Jihadists into the country’s northern regions seems like an already materialised scenario. Should this expansion not face an effective response by Burkinabe security forces in the immediate term, additional attacks against targets, especially foreigners, may become a new Burkina Faso’s painful reality. DM

Olga Bogorad (tweeting @Bogorad_Olga) is an Africa intelligence analyst at Max Security Solutions, a geopolitical risk-consulting firm based in the Middle East.

Photo: The burned-out exterior of “Cappuccino” restaurant is seen in Ouagadougou, Burkina Faso, January 17, 2016, a day after security forces retook the Splendid Hotel from al Qaeda fighters who seized it in an assault that killed two dozen people from at least 18 countries and marked a major escalation of Islamist militancy in West Africa. REUTERS/Joe Penney.