Drought: Time to call it a national disaster, says DA 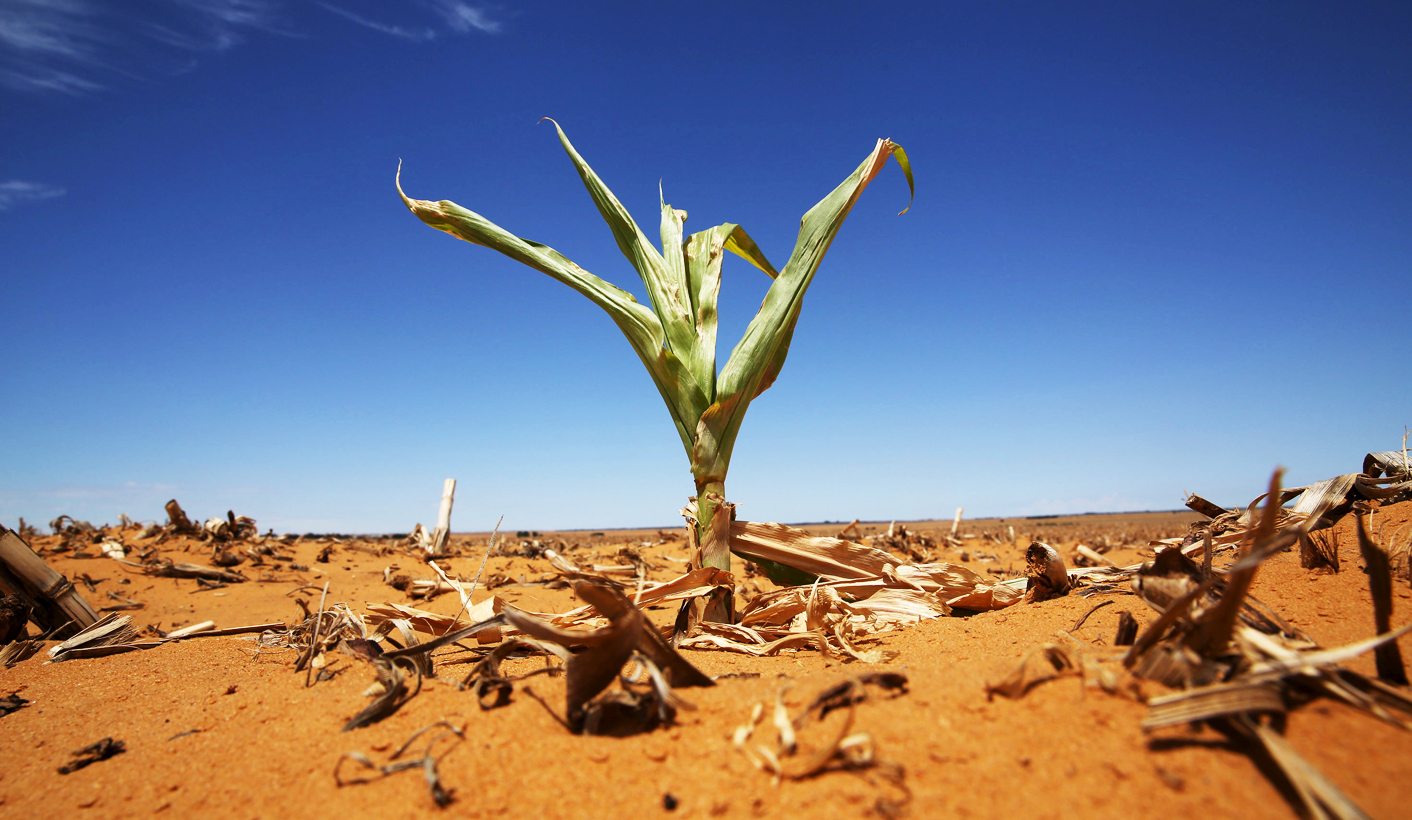 On Thursday, the DA called for the drought to be declared a national disaster, just hours after Finance Minister, Pravin Gordhan, stated that drought was an “absolute priority” for the Government. Dam levels are down in all provinces, at 57% of capacity. Food security, healthcare and employment are increasingly under threat, with no end in sight. By MARELISE VAN DER MERWE.

There is, for those currently without water, something to be said for the kindness of strangers. On Thursday, various media reported on the success of water drives countrywide. One of these was Newswire, which told the story of Water Shortage South Africa (WSSA). The brainchild of Facebook user Caroline van Saasen, WSSA began as the simple idea of asking people travelling over the festive season to make space in their cars for a few extra bottles of water to donate to dry areas. It rapidly snowballed into a drive with nearly 20,000 people behind it. Similar groups include Boere in Nood (Farmers in Crisis) and #OperationHydrate, among others.

But the donations are a stopgap, and projections appear grim. On Thursday, Finance Minister Pravin Gordhan said the ministerial committee on drought met recently to discuss the crisis. “Drought is an absolute priority for us,” he said. “As Cabinet, we take this very seriously.”

Donations and interventions have nonetheless come too late for some – those who have been forced to leave their farms, who have lost their livelihoods, their belongings and in some cases, their lives.

At a press briefing in Parliament, DA Member of Parliament, Annette Steyn, called for Government to declare the drought a national disaster, and set up a national task team to coordinate relief efforts. According to DA Chief Whip, John Steenhuisen, the party was awaiting a response from the Speaker on the above.

Steyn said she had travelled far and wide to compile a drought oversight report, which was released to media on Thursday. “Over the past two months, I have conducted an extensive oversight tour to gauge the true extent of the drought, travelling over 4,000km to visit drought stricken-communities across South Africa,” she said.

Steyn was of the opinion that government response to the crisis had been inadequate to date.

“The drought currently being faced by South Africa has reached crisis point. Provincial dam levels are down in all provinces, standing at 57% of capacity as of last week, compared to 82% for the same time last year,” she said.

“The DA conducted oversight visits in our country’s drought-stricken provinces… speaking to many affected people. The findings were both heart-breaking and shocking,” the report reads.

What constitutes a drought depends on who you ask. There are various measures, with the difficulty being, in a nutshell, that average rainfall can be calculated in a variety of ways. By any measure, however, South Africa has been experiencing diminishing rainfall over the last three years. The country is currently in the throes of a severe meteorological drought – the worst drought we have suffered in three decades. In 2015, South Africa recorded its driest year in over a century.

The South African Weather Service has predicted that dry and hot conditions are likely to continue. “The forecasting system is confidently showing that going towards the late summer and early autumn seasons, the likelihood of dry conditions over most parts of the country is still high,” the SAWS said in December.

The DA report explains that at Mooi River dams had dried up and streams were running dangerously low. One emerging farmer had lost a quarter of his flock to malnutrition and thirst. At Mthubathuba, “[h]uman suffering has driven many local community members to pay bribes to have water delivered to them, while others have [risked] crossing the very busy N2 highway to collect buckets of water across the road, where a broken municipal water pipe has been spilling water for months.”

At Hluhluwe, local farmers have lost an estimated 60% of their cattle to malnutrition and thirst, while tree plantations and sugar cane fields are dying, according to the report.

In other areas such as Clanwilliam, which is the only area that produces the rooibos tea plant, Setlagole, Tosca, Ghaapse and Vryburg (among others) production has either declined or is set to show a huge decline. Local farmers are frequently in serious debt, say the report’s authors. In some areas, farmers have had to decrease their herds in order to buy feed for the remaining animals. By the start of 2015, data provided by the South African Department of Agriculture confirmed that farming debt already stood at R117 billion.

“In the maize producing heart of the country, less than 3% of the maize had been planted, and the planting season has now passed… the least number of hectares have been planted in the area since 1926,” the report reads.

On many farms, said Steyn, animals in desperate search of water became trapped in mud and clay, which could be deadly if they were not rescued in time. A particular crisis was the slaughter of pregnant female animals, which meant herds could not be kept intact. The crisis now was to feed these females, she said. Unfortunately, some of the most serious effects of the drought are likely yet to be felt. Although there have been some increases in food prices, the full effects will only be noticed at a later stage, said Steyn.

Further, agriculture contributes a little less than a tenth of South Africa’s formal employment opportunities, which means job losses will be felt keenly. Stats SA, which is also cited in the DA report, says the agricultural sector employed just under 900,000 people in the first quarter of 2015. Secondary job losses are also likely to occur in other industries.

Other knock-on effects include a lack of food security, an increase in crime, violence and civil unrest as resources become scarcer, and a notable impact on already strained healthcare resources, said DA Shadow Minister of Health, Dr Heinrich Volmink.

“There is likely to be an increase in waterborne and communicable diseases,” he said. This is because the concentration of microbial organisms is higher where there is a decrease in water volume. Volmink also noted that hydration was especially important in many chronic and long-term illnesses, and that HIV/Aids patients were likely to suffer particularly. Dehydration was a particular risk in patients with gastrointestinal illnesses, particularly children. This is of special concern because worldwide, diarrhoea is the second leading cause of death in children.

The poor are likely to be the hardest hit, with agricultural economics scholar, Nick Vink, explaining some of the finer details in an analysis in The Times. According to Vink, it’s not unrealistic to expect a halving in plantings of maize, a staple, and supplies of white maize could run out in as little as eight months; imports of yellow maize could start even earlier. The problem is that import candidates Zambia, Uganda and Tanzania have markets closer to them than South Africa. “Consumers will have to cut back, and will switch to rice, wheat and potatoes, leading to even greater import dependence for rice and wheat,” Vink writes.

Steyn, meanwhile, urges declaration of a national disaster, in accordance with the National Disaster Management Act. This would entail calling in the South African National Defence Force (SANDF), the South African Police Service (SAPS), and any other necessary organ of state to assist via coordinated relief efforts.

“This represents a major economic and humanitarian crisis as food security is placed under threat and the livelihood of those in the agricultural sector is placed in jeopardy. This is not a crisis limited to commercial farming, but extends to each and every South African and the poor in particular,” said Steyn.

“[Water] donations are a drop in the ocean,” she added.

But, whether Steyn intended the pun or not, for those in the dry areas, every drop counts. On WSSA’s page, one post says it all: “Wow and wow, thank you to the person who offloaded the 80×25 litres at Caltex Aswood and surrounds. You all are fabulous.” While on Boere in Nood, one hopeful thread simply tracks the rain – however little – in a trail of comments: Vanderbijlpark, Klerksdorp, Welkom, Ottosdal, Stilbaai, George, Fochville, Polokwane, Louis Trichardt…

With one user’s simple encouragement to those who are still waiting: “Keep the faith. It’s coming*.” DM

Photo: A maize plant is seen among other dried maize at a field in Hoopstad, a maize-producing district in the Free State province, South Africa, January 13, 2016. South Africa suffered its driest year on record in 2015, the national weather service said on Thursday, as a drought that has threatened the vital maize crop and hit economic growth showed no sign of abating. REUTERS/Siphiwe Sibeko