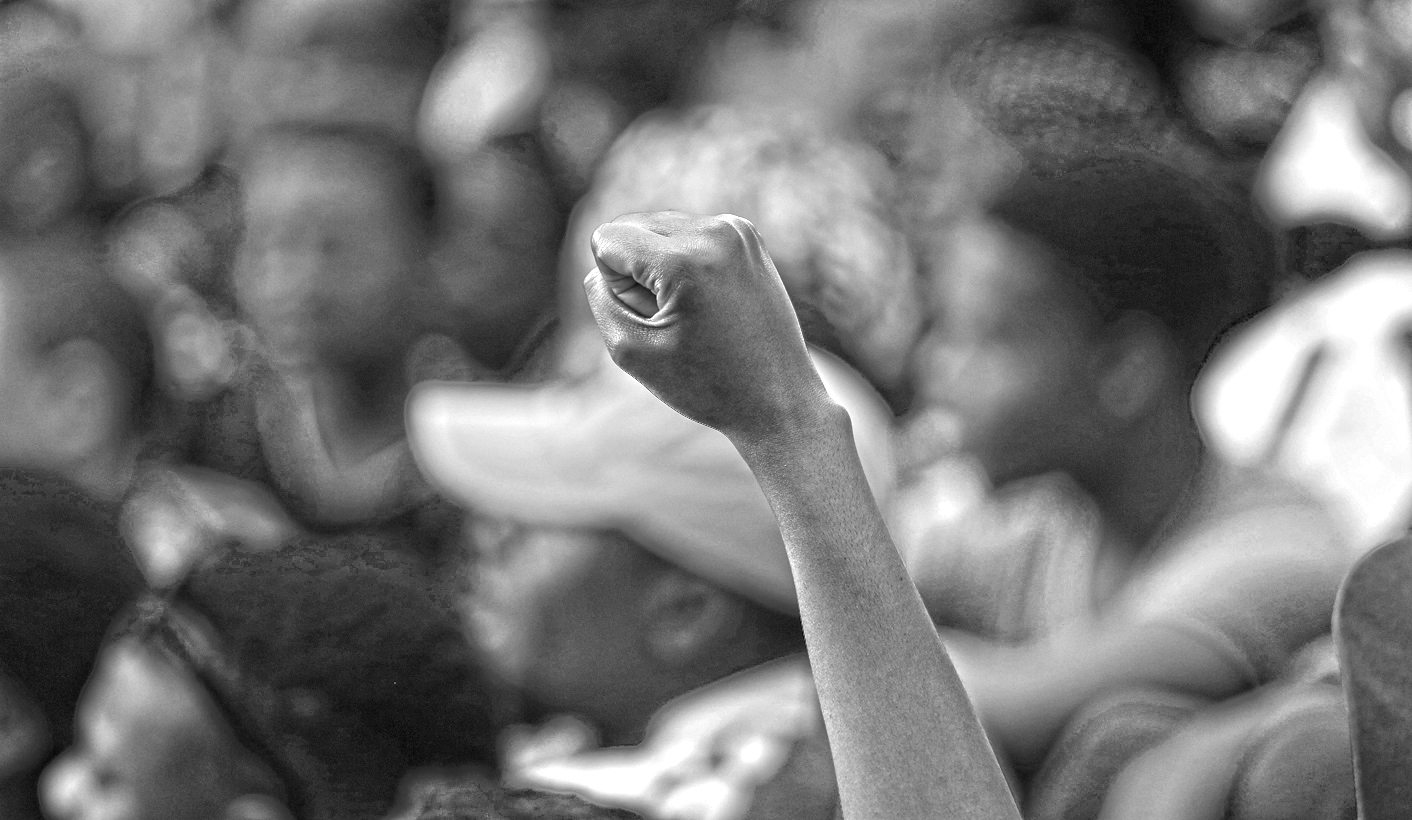 Protests at varsities in Gauteng continued on Wednesday, with workers leading the charge in Tshwane, shutting down institutions in the fight against outsourcing. In Johannesburg, Fees Must Fall members said they were committed to the fight for free education. By GREG NICOLSON.

Universities in Tshwane were closed on Wednesday as workers and students continued to demonstrate against outsourcing, one of the key issues raised during last year’s Fees Must Fall protests. In a statement, a group calling itself #OutsourcingMustFall said thousands of workers from Unisa, University of Pretoria, TUT, Tshwane North College, Tshwane South College and Medunsa continued to protest on Wednesday. Unisa’s Sunnyside and Muckleneuk campuses were closed, as was the University of Pretoria, which will also be closed on Thursday due to the the protests.

“Workers are determined to struggle until their demands are met. All they are demanding is a fair pay and job security for the long hours and difficult work they do,” said Mametlwe Sebei, #OutsourcingMustFall spokesperson, in a statement. Workers at universities and colleges in Tshwane met in November and December and made the decision to strike on Saturday. The Workers and Socialist Party brought the workers from different universities together last year but the group says the movement is open to all.

#OutsourcingMustFall wants outsourced workers to immediately be employed with full benefits and a minimum of R10,000 income per month and for workers who were recently retrenched to also be offered permanent jobs. The group emphasised that the protests at the Tshwane institutions is organised by “cleaners, gardeners, security and other workers” and supported by students.

University of Pretoria obtained an urgent court interdict to prevent protests on campus and allow student registrations to proceed, but on Tuesday there were graphic images of the police shooting rubber bullets and stun grenades at demonstrators as the university claimed students and workers from other institutions gained access to its Hatfield campus. Protesters are reported to have said they were shot with rubber bullets without provocation.

Student groups at Unisa, where the Economic Freedom Fighters Student Command (EFFSC) has been prominent during this week’s protests, accused the EFF on Wednesday of political posturing. After a meeting between Unisa’s Democratic Alliance Student Organisation, South African Students Congress, Pan Africanist Student Movement of Azania and ANC Youth League, the groups issued a joint statement. “The meeting unanimously agreed that the ongoing strike is nothing but sheer opportunism on the part of the EFFSC and is aimed at boosting its public profile ahead of SRC elections,” it said.

“It is our considered view that the EFFSC actions are calculated and aimed at subverting registration and destabilising operations of the university for its selfish interest,” they continued.

The Unisa student groups distanced themselves from the protests and said they support the existing task team on insourcing. They also listed demands of their own, calling for an immediate response to outstanding university applications, registration without upfront payments, and the clearing of all historical student debt.

According to The Times, the EFFSC plans to shut down all Unisa campuses while supporting outsourced workers and claims the university has gone back on agreements reached with staff. EFFSC also noted problems with Unisa’s online registration system.

In Johannesburg, there was a large security presence at the University of Witwatersrand on Wednesday and police were present around its Braamfontein campus. After face-to-face registrations had been interrupted since Monday, registrations resumed, with security staff outnumbering Fees Must Fall activists. In a statement, the university encouraged students to continue registering online and telephonically. “Students who cannot afford to pay the first installment can fill in a form online indicating that they cannot pay, and the University will allow them to register,” said Carol Crosley, the Wits registrar. The university noted the state’s promise to take care of the financial debt of students who were on the National Financial Aid Scheme in 2015.

The University of Johannesburg has said its online registration process is running smoothly and this week Vice Chancellor Ihron Rensburg issued a statement explaining the varsity’s response to last year’s protests. Rensburg said the waiving of the fee increase would cost UJ R200 million, with the university covering R60 million through cost-cutting measures while the state will pay the rest. After listing UJ’s attempts to address financial exclusion, the vice chancellor said, “As we go forward, it is critical to maintain an uninterrupted academic programme to secure the success and progress of our students, their families, our staff and our nation.”

But Students from Wits and UJ representing the Fees Must Fall movement on Wednesday said they were committed to protesting until there is a firm commitment from the state to implement free tertiary education. “No free education, no elections,” a small group of students chanted in a park opposite UJ, declining to elaborate on whether they would attempt to disrupt this year’s local government elections. The group said Higher Education and Training Minister Blade Nzimande’s scheduled meeting with student leaders on Thursday was pointless and condemned their institutions for hiring private security guards to crack down on protests. Demonstrators from Wits claim to have been assaulted and sexually assaulted by private security guards evicting them from where they occupied a building while the university claims the action was above board.

With most university students not yet back at school and the goal of free education a far greater task than zero percent fee increases, it’s unclear how much support the ongoing protests have. But as Wits student Busisiwe Seabe said on Wednesday of last year’s protests: “We showed the country that the impossible is possible.” DM

Photo: Some of the thousands of students from Wits University demonstrate outside the ANC head offices at Luthuli House during another day of demonstrations against fee increases at their university, Johannesburg, South Africa, 22 October 2015. EPA/KIM LUDBROOK