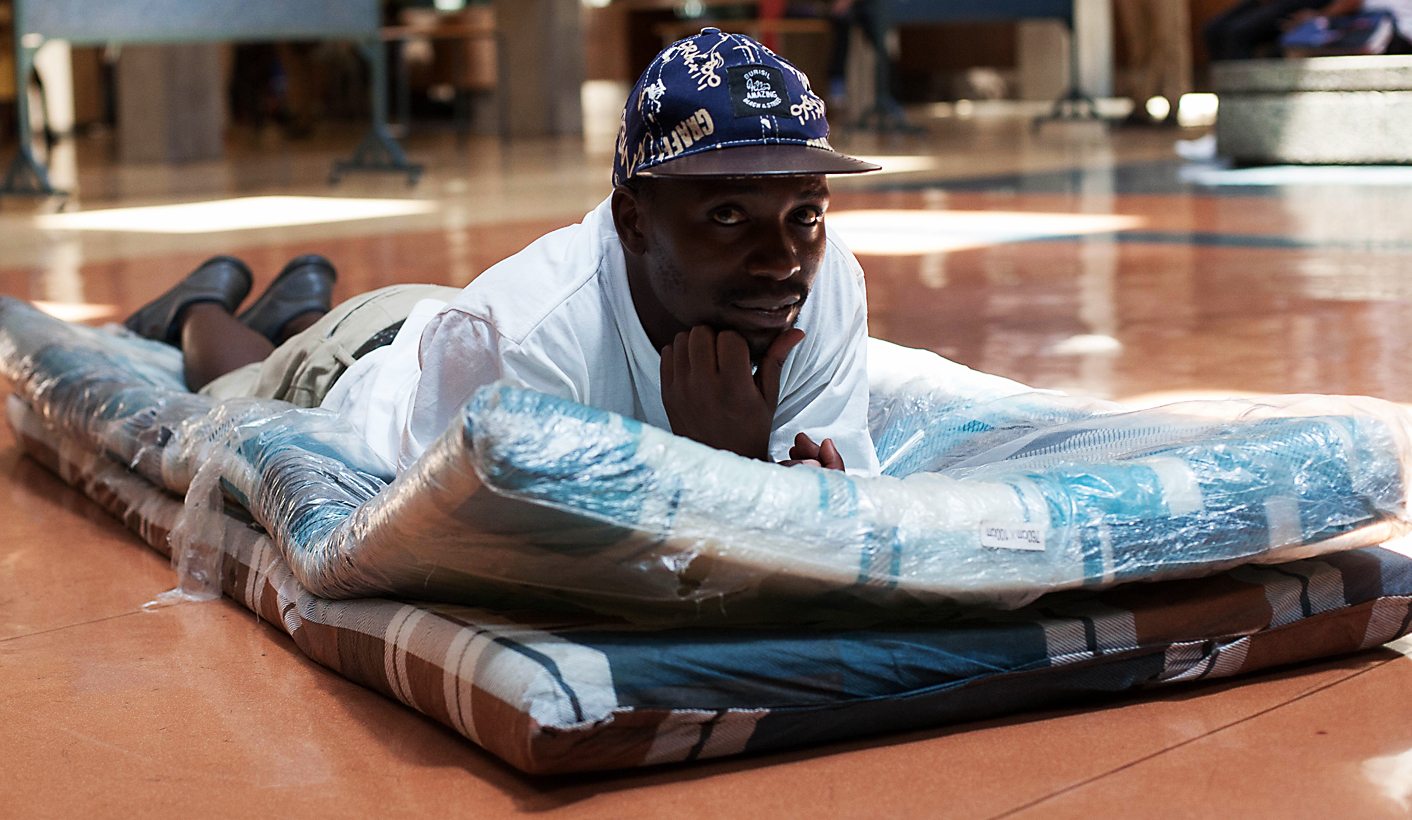 Last year students promised the fight to improve access to tertiary education would continue and on Monday multiple universities saw protests. GREG NICOLSON was at the University of the Witwatersrand.

Wits, the University of Johannesburg, and the University of South Africa saw protests on Monday, disrupting 2016 registrations and leaving some new students and their families confused as protesters seek to build on last year’s momentum and reduce the financial, racial and class barriers to accessing university education.

At Wits, students shut down face-to-face registrations and the university closed administration offices leaving youth, hopeful of studying at Wits, and their families waiting and confused as a small group of students occupied Solomon Mahlangu House, the centre of the Fees Must Fall campaign at the university that closed its Braamfontein campus in October and November.

Both the Wits Student Representative Council (SRC), led by the Progressive Youth Alliance (PYA), and the Fees Must Fall group at Wits issued lists of demands. SRC Secretary General Fasiah Hassan said the key demands relate to fighting student exclusion, clearing debt, which prevents students from graduating and registering, and ensuring no one who qualifies academically to study at Wits is turned away. The university is allowing students to sign up for a payment plan, which allows them to pay their registration by the end of March, but the SRC wants an assurance that even students who cannot pay by then are not excluded from their studies. The SRC also wants the university to create a road map towards achieving free education, and for agreements last year relating to workers and students to be honoured.

Sarah Mokwebo, speaking for the Fees Must Fall collective, said the key demand is the scrapping of historical debt that prevents students from registering. The group’s memorandum includes demands such as free education (now, it emphasises), the scrapping of the registration fee, fresh SRC by-elections, as the group says the last elections, where the Economic Freedom Fighters were barred from contending, were unconstitutional, and for no police to be present on campus. (On Monday a number of police vehicles were at Wits.)

Responding to the disruptions, Wits said face-to-face registrations would be delayed until Wednesday. It encouraged applicable students to register online and has set up a telephonic registration process for certain courses. Student leaders on Monday said they were yet to hold discussions with the university. A statement from Wits on Monday said: “We respect the right to protest and we support the call for free education for poor students. However, we cannot allow the financial sustainability of the university to be compromised. We urge all students to allow the registration process to continue undisrupted.”

It noted the presidency’s announcement that the financial debt of students on the National Student Financial Aid Scheme (NSFAS) in 2015 will be settled by the state, but said other students must still pay their debts before registering. “We would have liked to make a concession in this regard, but the historical debt of these students amounts to over R100 million and if we were to make such a concession, the university would be thrown into a financial crisis that would compromise the education of all students,” said the university.

As the Fees Must Fall protests spread to most universities across the country last year, President Jacob Zuma announced fees would not increase at tertiary institutions in 2016 and engagements were held between students and the state. During the ANC’s January 8 statement this weekend, Zuma highlighted the state’s efforts on improving access to university studies and noted the influence of students.

On Sunday, Universities SA, representing the country’s universities, called for increased state funding of the sector. On Monday, Higher Education and Training Minister Blade Nzimande said over 500,000 post-school education opportunities were available this year for learners across universities and technical and vocational education and training colleges. “We need to ensure, over the medium to long term, that sufficient financial aid is made available to support all academically deserving but financially needy university students though income contingent loans and bursaries, and at the same time to strive to keep university fees affordable,” said the Minister, who was criticised for his response to last year’s protests.

Government has committed an additional R6.9 billion to fund the university system, said Nzimande, above the R10 billion already marked for the NSFAS. Of that increase, R2.3 billion is to cover the zero percent fee increase. The Minister emphasised NSFAS students do not need to pay upfront registration fees, but suggested a planned inquiry on the accessibility of tertiary education will look into the issue of students who don’t qualify for NSFAS but who still can’t afford their fees. After protests last year led to increased state efforts in improving access to tertiary institutions and agreements at campuses across the country attempting to address issues such as financial exclusion, the outsourcing of workers, and a lack of African content in the curriculum, at Wits students are keen to keep the momentum up. Both Mokwebo and Hassan said the plan is to continue protesting until their key demands are met.

S’bonakaliso Nene, a Wits student active in last year’s protests, said, “The greater goal that we’re pushing for is free education in South Africa now – not later, not soon, not in the future, not in our lifetime; Now! We need to start pushing for that. We need to see tangible, comprehensive steps taken by government, by all those in power, to show us the ways and means in which they are trying to attain this. We don’t feel like a zero percent increase is good enough. That’s merely just a start, because if you look at it those people who couldn’t afford fees, they still can’t afford fees now.”

“Genuinely I feel like last year was a spark to the movement and how things are going with our generation,” he continued. “I think this year’s going to be a whole lot more robust. I think there is going to be a lot more interaction in regards to issues that have been swept beneath the carpet, like race.” Nene predicted that as long as black people continue to be oppressed in South Africa and at institutions like Wits, future classes of students will continue the fight.

Some people who came to register on Monday, however, felt frustrated by the disruption. Busi Shongwe, who left Nelspruit in the early hours of the morning to register her 18-year-old daughter Charmane Mashabane to study occupation therapy, said she was sympathetic to the protesters. But the family felt confused as students were giving them different takes on what would happen and Shongwe had not heard anything from management. She said they cannot afford to stay in Johannesburg to wait until they can register.

“I’m afraid or sceptical that my child might not be registered. What will she do for the entire year because of the strike?” she asked, suggesting students were shutting the gate on new learners. Her daughter, Mashabane, said was excited to register when she arrived at Wits, but added, “I feel really sad now that I’m going back home and I can’t do anything about it now, but I’m hoping they’ll get back to me and respond because I’m hoping to study this year and not just sit at home.”

Asked about those who were disappointed on Monday, the SRC’s Hassan said, “A revolution is going to be inconvenient. We know that it’s not going to be smooth sailing for everyone, but I ask that those people bear with us because we’re trying to change a system and we’re trying to change the face of this country as the youth of South Africa post-1994 and it’s going to be inconvenient and there are going to be times where everyone is frustrated with us but remember that we’re doing it for the betterment of society, and the betterment of not just us but for future generations. Because if there’s one thing we can give them it is free education to change their lives.”

Mokwebo, from Fees Must Fall, said she understands the inconvenience, but noted how she and other protesters are also inconvenienced, by the system and by making sacrifices for their aims. “I’d like to say we are all frustrated. I’m also frustrated as I speak to you right now.” She called on prospective students to find out about the movement and join in.

While the first day of protests at universities this year has already affected three institutions, it’s unclear whether students will be able to achieve the mass momentum they built in 2015. At Wits, one challenge is the division among students. Solomon Mahlangu House, where the Fees Must Fall group were established, included the banners “SRC sux” and “Fuck ANC”.

Among that group were a number of EFF members. The SRC’s Hassan, whose PYA is aligned to the ANC, suggested political opportunism was at play. “I think we must just be cognisant of the fact that a local government election is upcoming in the next few months and there are very opportunistic situations and parties and groups seeking to hijack things,” she said outside the building.

Mokwebo, speaking inside the building, said the SRC viewed the Fees Must Fall group as enemies when it continued protesting after Zuma’s announcement following the march to the Union Buildings last year and the relationship is still strained. Both groups said they hope to find common ground going forward.

Speaking inside Solomon Mahlangu House, Wits sociology Professor David Dickinson said it’s no surprise the protests are continuing after the key aim last year shifted towards free education. “I think we have got to recognise that the students understand their own power now. That’s something that they had not understood for years,” said Dickinson, noting many staff members are behind the students. “We’re here to educate the nation. We’re not here to educate only those that can afford it.” DM

Photo: A protester at Wits lies on a mattress in Solomon Mahlangu House on Monday, the centre of the student protests at the university last year. (Greg Nicolson)