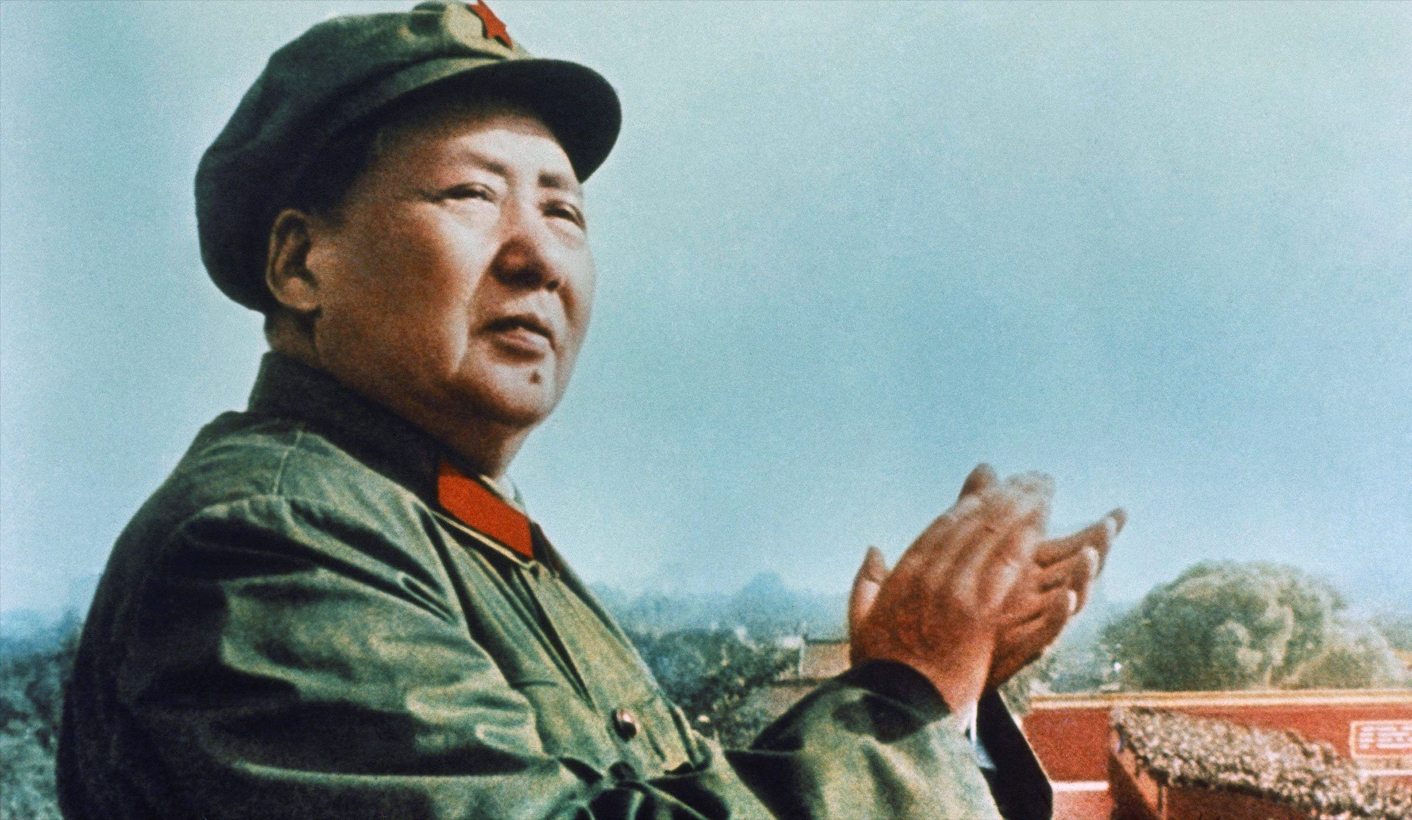 Hearing of South African President Jacob Zuma’s exhortations to the ANCYL, J. BROOKS SPECTOR recalls how a former leader of another BRICS country, Mao Zedong, also challenged the youth to push aside the powers that be in China during the Cultural Revolution.

Imagine the scene in Beijing’s Forbidden City, in Mao Zedong’s private apartment back in 1966, as he and his wife, Jiang Qing, are sipping cups of their favourite blend of jasmine tea. They speak about the way the air has been escaping from the balloon of the permanent revolution that was so dear to the “Great Helmsman”. They speak, with wistful nostalgia for the good old days of his Long March that brought his party and its army into the safety of the mountain fastness of the caves in Shaanxi, and away from their Nationalist enemies. Now, the two of them muse, nearly two decades after their victory over Chiang Kai-Shek’s Koumintang government, the government of China has been slipping from the grasp and control of true peasant leaders like Mao. Increasingly, it is in the hands of crafty intellectuals, army officers and bureaucrats – devious people like Chou En Lai, Deng Xiaoping, and Liu Shaoqi.

And so, in the fullness of time, the Chinese Communist Party’s Politburo’s “16 May Notification” declared: “Those representatives of the bourgeoisie who have sneaked into the Party, the government, the army, and various spheres of culture are a bunch of counter-revolutionary revisionists. Once conditions are ripe, they will seize political power and turn the dictatorship of the proletariat into a dictatorship of the bourgeoisie. Some of them we have already seen through; others we have not. Some are still trusted by us and are being trained as our successors, persons like Khrushchev for example, who are still nestling beside us.”

A storm is brewing, no doubt.

Then, three months later, what had ostensibly begun as a kind of student movement, was broadened out into a much wider assault on the Communist Party’s own establishment when the party’s Central Committee issued its “Decision Concerning the Great Proletarian Cultural Revolution”, more popularly known as the “Sixteen Points”. This new declaration defined the burgeoning movement’s aims in the following manner:

“Although the bourgeoisie has been overthrown, it is still trying to use the old ideas, culture, customs, and habits of the exploiting classes to corrupt the masses, capture their minds, and stage a comeback. The proletariat must do just the opposite: It must meet head-on every challenge of the bourgeoisie… to change the outlook of society. Currently, our objective is to struggle against and crush those people in authority who are taking the capitalist road, to criticize and repudiate the reactionary bourgeois academic ‘authorities’ and the ideology of the bourgeoisie and all other exploiting classes and to transform education, literature and art, and all other parts of the superstructure that do not correspond to the socialist economic base, so as to facilitate the consolidation and development of the socialist system.”

And so, the question became how China would respond to the crisis defined by the party? This became a broad national campaign challenging the next generation – all those millions of young people who were teenagers or just a little older in the mid 1960s – to respond by confronting all those settled, older people now running things with the charge that they were counterrevolutionaries – or worse. Soon enough, masses of young people were attending vast rallies while waving their copies of Mao’s Little Red Book as truckloads of bureaucrats, professors, students and intellectuals, and so many others, were rounded up for rustication, as with Deng Xiaoping, while others were hounded out of their studies or offices and publicly humiliated or much much worse.

From 1966, until it ended a decade later, China’s young people’s Cultural Revolution, unleashed by Mao and his wife, created a vast upheaval in Chinese society and its increasingly beleaguered economy. The shambles only truly drew to a halt once Mao was dead in 1976, and after the arrest and trial of Madame Mao and the rest of the Gang of Four, and as humiliated leaders like Deng Xiaoping came back from their internal exiles so that they could slowly bring order out of the chaos that had been happening across a vast nation of a billion souls.

Of course, many westerners fell in love with the Cultural Revolution. Various of the writer’s own university professors were sufficiently enamoured with the Cultural Revolution that they also argued the turmoil Mao had unleashed was the way forward for real social and economic progress. The horrific social costs included the belief that so many inevitable eggs had to be broken to make that revolutionary omelette.

But, in more recent years, as China’s astonishing, enormous economic successes (once Deng’s maxim “to be rich is wonderful” took hold) have become the envy of leaders in many emerging economies, including South Africa, a growing number of such politicians have looked to China for inspiration about how to ignite their own economic revolutions. Here in South Africa, for example, many leading politicians have been quite clear about their unswerving emulation of China and its economic record – pointing to the promised success of the BRICS grouping, and an extraordinary African – Chinese consultative forum hosted by South Africa.

But perhaps is there also a kind of palimpsest of those Chinese developments in the 1960s in the way President Zuma has been approaching his own leadership circumstances? One wonders just what kind of conversations he has had recently with some of his colleagues, spouses and ex-spouses prior to his own 9 January comments in Rustenburg to the ANC’s Youth League when he said the ANC Youth League needs to be less diplomatic in its defence of the ANC.

In the president’s own words: “Diplomacy belongs to us older people, not you. Tell them as it is, [to] whoever stands in the way of the ANC. We won’t reprimand you and say you have gone astray, but you must do it in a disciplined way.”

He went on to tell his audience that the ANCYL cannot sit back while people attacked the ANC “day and night”, adding that the “young lions” had to use social media such as Twitter and WhatsApp to defend the party. “You need to defend the ANC. It is your duty. Now that the revolution is under threat, you must be at the forefront. That is the truth.”

Of course, in this case, Zuma’s remarks were clearly stump speech rhetorical crowd pleasing, dog whistles and red meat to the ANCYL. By the same token, however, the Cultural Revolution did not exactly begin with a nationally coordinated, carefully worked-out national master plan to bring about a decade’s worth of social and economic chaos in the lives of a billion people. It should also be remembered that within the ANC stable, the Women’s League has also been charged with developing a youth outreach project to inject some energy and build momentum in that body. Such a youth outreach program is inevitably also going to hear rhetoric designed to build up a head of steam among its audience members.

The problem, of course, is that once a door like this is opened, it is impossible to predict exactly what will come in through that door – especially in an increasingly tense, anxious and angry political climate such as the one in South Africa these days. Alexis de Tocqueville, the great 19th century French student of American society, the observer who had for the first time cogently described the importance of voluntary associations as one of real keys to a thriving democracy, was also, less famously, an observer of Russia. In writing about Russia’s autocratic regime under the czars, de Tocqueville had discerned another social truth that had explained, “The most dangerous moment for a bad government, is when it begins to reform.”

Or, translating that observation into a more contemporary vein, one can argue that an increasingly elderly ruler, desperate to reassert his political control by egging on a new generation to tackle the increasingly entrenched powers of its predecessor generation, should also be aware of the possibilities the regime will come to live out the Biblical prediction, “He that troubleth his own house shall inherit the wind: And the fool shall be servant to the wise of heart.” DM