ANC at 104: “The year of advancing people’s power” 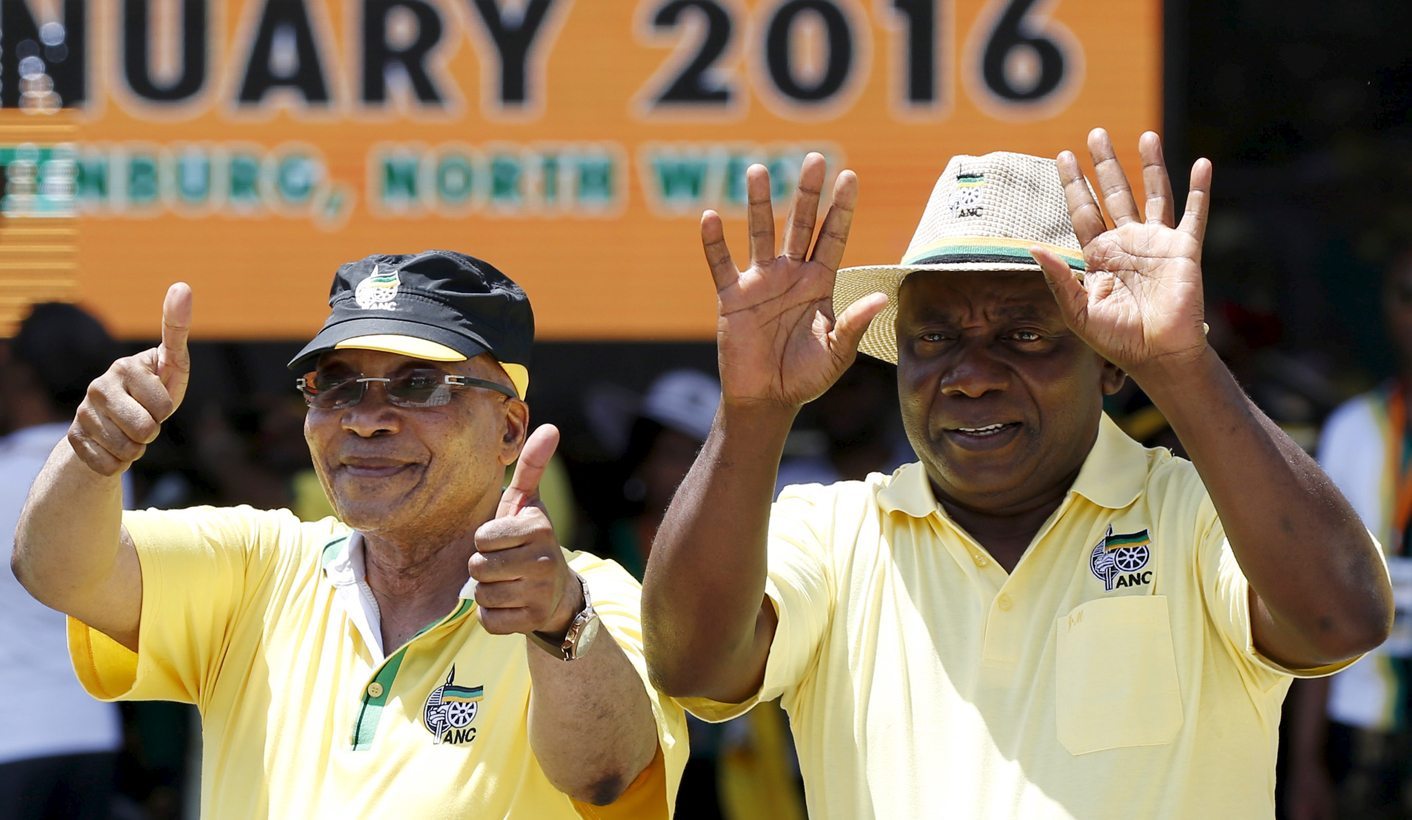 The ANC’s slogan for 2016 could be something of a dare to the people of South Africa. People’s power could sweep the ANC towards another decisive victory at the polls, or it could cause real trouble for the ruling party through popular protest action and ground-level campaigns. The ANC’s 104th birthday celebrations in Rustenburg show that the party still popular and has massive organisational and campaign power. The year 2016 will be a test of whether history, state power, organisational muscle and the ANC brand is sufficient to maintain its electoral dominance or whether this will be its year of reckoning. By RANJENI MUNUSAMY.

Penny Sparrow changed the narrative. The country’s economic crisis would have been the major issue for the ANC to tackle during its January 8 celebrations this year. The huge financial losses and pounding of the currency since December’s finance minister juggling act should have presented the ANC with tough questions to answer as it set out its mission statement for the year.

The ANC should have been asked how it would prevent the president from further illogical actions that sabotage the country. It should have been asked what role factional dynamics and the influence of the “premier league” lobby group had on the president’s decision. Last week was the first time the ANC’s national executive committee (NEC) met since Nhlanhla Nene was fired, David van Rooyen appointed Finance Minister and then shifted to make way for Pravin Gordhan.

The ANC’s reaction to the fiasco was to praise President Jacob Zuma for responding to the widespread condemnation and reversing Van Rooyen’s appointment. That came after a national working committee meeting that was described as “robust”. But the entire national leadership had not had the opportunity to examine the matter.

Thanks to Sparrow and others spewing racist bile, the national discourse has been consumed by outrage and introspection of the systemic racism that preserves white privilege. This is of course a necessary discussion that should be happening without rapid racists forcing it onto the agenda.

The consequence, however, is that it let the ANC leadership off the hook.

No hard questions were asked. The ANC’s birthday celebrations proceeded smoothly – apart from the sexual assault complaint against the party’s Western Cape chairperson Marius Fransman casting a shadow over matters.

The ANC’s messages in the January 8 statement were therefore nothing out of the ordinary. The NEC statement read by Zuma at a mass rally in Rustenburg on Saturday said, ironically: “It is incumbent on all of us to ensure proper fiscal management and prudent utilisation of public money”.

“We must remember that the world economy is still experiencing low growth following the global economic crisis of 2008. South Africa, like all developing economies, must take steps to deal with such low growth. We identified a two-pronged strategy to chart the way forward: structural reforms to create and maintain a higher growth path and reducing South Africa’s vulnerability by stabilising public debt,” Zuma said.

A large section of the statement dealt in detail with the issue of racism. “South Africa’s history of apartheid and colonialism, characterised by a ‘racial hierarchy’ and systematic, institutionalised conquest and dispossession of the indigenous people of this country, is directly related to our current challenges of unemployment, poverty and inequality.”

“It is clear that there is a tiny minority that still harbours a desire for separate amenities and who idolise apartheid-era leaders who made our country the skunk of the world. These people do not represent the true character of the new South Africa. They are living in the past,” Zuma said.

“The ANC has put in place the legislative instruments to prevent discrimination on the basis of race and this has gone a long way in dealing with the social ills associated with discrimination. However, building a non-racial society requires more than this. It requires a mind-set shift that respects the basic human dignity of all people and a commitment from everyone to consciously reject racism and narrow ethnic chauvinism.”

The ANC called on all its structures “to lead the debate on what makes us South African and we urge all the peace-loving citizens to join in the debate”. The party also called on its branches to develop campaigns against racism and involve their communities, civil society and religious organisations in them.

But in an interview with eNCA, Zuma said the issue of racism was being “exaggerated”. He said it was not true to say South Africa was racist “because five people make racist statements”. He said the ANC had “defeated racism” and South Africa was a “rainbow nation”.

It is not clear why Zuma chose to play down the problem in a week when so many racist rants have surfaced, and the country and the ANC are trying to confront the issue. As the party of liberation, the ANC should have moral high ground to lead the debate but the issue of systemic racism has not been a priority. And despite both government and the ANC sending out strong signals that hate speech should be criminalised, Zuma’s response creates the impression that racism is not a big deal in South Africa today.

Photo: A man wearing a T-shirt with the logo of the African National Congress (ANC) gestures as he is removed after he invaded the pitch during the party’s 104th anniversary celebrations in Rustenburg, South Africa January 9, 2016. REUTERS/Siphiwe Sibeko

Racism was not the only issue Zuma said was being “exaggerated”. In interviews with eNCA and the SABC, Zuma said he thought there had been an “overreaction” to him firing Nene in December. “People did not understand what was happening,” he said. “We had clear idea of what we were doing.”

He said the Rand had been in decline even when Nene was Finance Minister. “It was not triggered by the decision.”

If it was assumed that the financial turmoil and “Zuma Must Fall” protests would be a wake up call for the president, his comments show that this is clearly not the case. Both on the financial crisis and the racism issue, Zuma continues to be disconnected to mass public sentiment and a drag on his party.

The weekend’s celebrations in Rustenburg is the opening act of what is destined to be a tough year for the ANC. While they dodged having to confront the difficult issues until now, these have not been expunged from the public mind.

Apart from the hotly contested local government elections, higher education funding is destined to be a hot button issue this year. The ANC and government are already trying to counter a resurgence of the #FeesMustFall movement by making more student funding available. But the student activism ignited initially around the lack of transformation and apartheid symbols. If there are further protests, it is unlikely they will be one-dimensional over student fees.

The ANC will launch its local government elections manifesto on 12 March in Port Elizabeth. It is no secret why the party is going there. It is widely anticipated that the ANC will lose control of the Nelson Mandela Bay Metro and the manifesto launch will bring all the big guns to go on a major campaign blitz. The country will switch to full campaign mode thereafter.

The ANC will have to contend with the growth of opposition parties such as the Democratic Alliance and Economic Freedom Fighters (which will be contesting municipal elections for the first time), its internal factional battles in the selection of councillors, its scandal-plagued recent history, frustrations over the drought, existing service delivery problems, poor performance of municipalities and the toll of poor economic growth on communities. And on top of this, ANC structures will be looking ahead to the change of leadership next year and what that means for the internal dynamics of the party.

People’s power in 2016 can either prove to be a gift to wash away the sins of incumbency in the ANC or a political hell ride for a disconnected leadership. Either on the streets or at the polls, the choice will be evident. DM