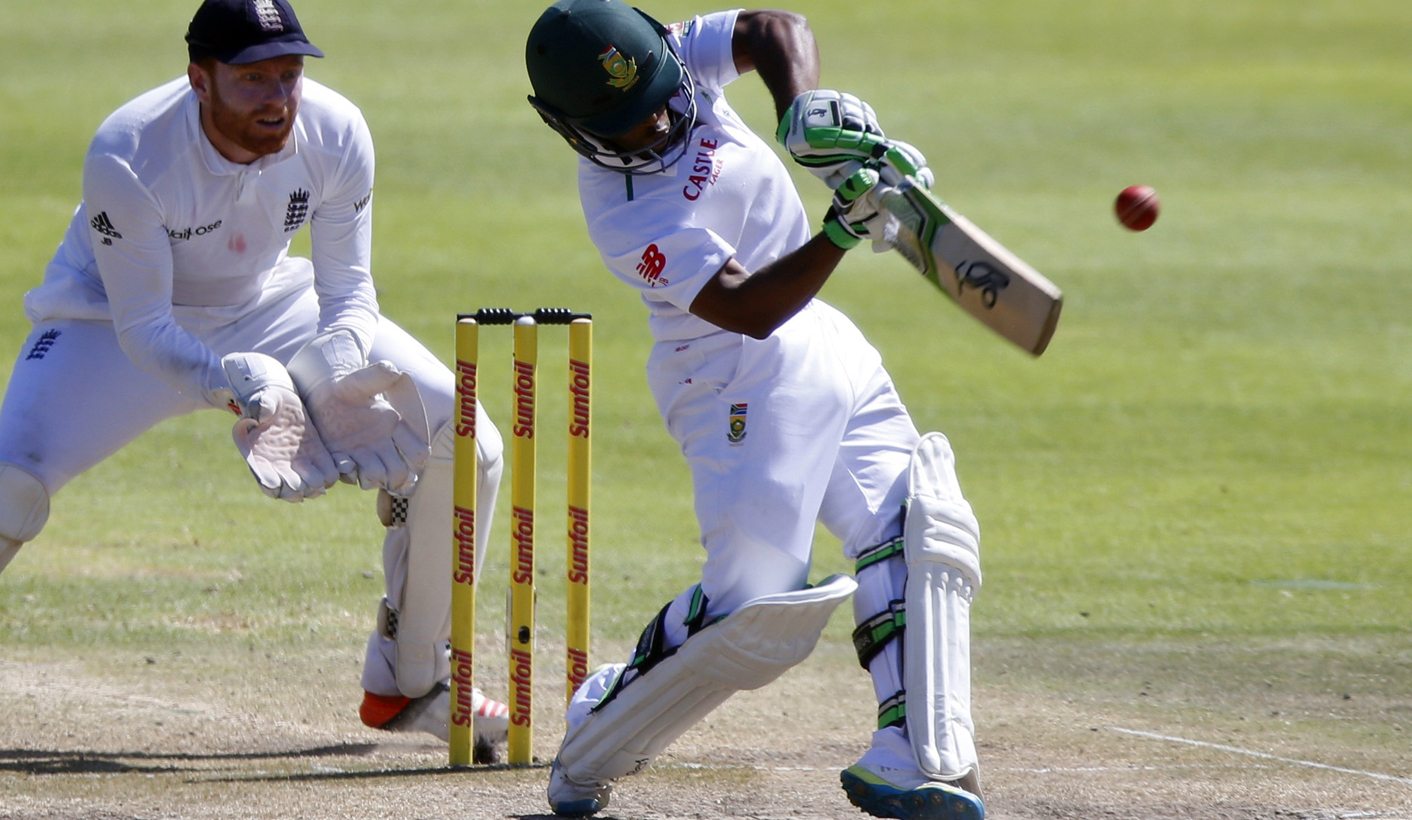 That it has taken South Africa over two decades to produce its first black Test centurion says a lot about the struggle to transform the sporting landscape for South Africa. Those who bang the development drum should merely view this as a small victory. By ANTOINETTE MULLER.

In pressure situations in sport, seconds can feel like minutes. Minutes can feel like hours. Hours can feel like days. That’s how it felt as Temba Bavuma poked, prodded and eventually slapped his way to the history books. It took the diminutive batsman 40 minutes and 46 balls to go from 87 to his maiden Test ton. While the wicket was flat, the atmosphere most certainly was not.

That it has taken South Africa over two decades to produce its first ever black African centurion tells you everything you need to know about just how exclusive and elite the sport still is. Those ongoing challenges are part of the reason why Bavuma’s story is so endearing. Not only is he rather short for an international cricketer, he also spent his formative years in Langa, a place to which he still has a strong affinity, but where access to resources remains a massive hurdle for the township’s youth. In Bavuma, they have found a new hero and just a glimmer of inspiration.

“I looked today at the kids who were there for the KFC Mini cricket festival at lunch. Half of those kids come from Langa and half of them know my name. Whenever I go back to Langa I know I’m going to have those kids running around me,” Bavuma said.

That influence will now stretch much further, that is just how significant Bavuma centurion is. From Langa to Lenasia, everyone will know his name for years to come. The 25-year old has become an icon and he has shattered a glass ceiling that has existed for far too long. But this should only be the beginning.

It is important that those who bang the development drum view this as only a small victory. Bavuma should not be an anomaly, but a norm. That will not be possible without some serious introspection from those tasked with transforming the sporting landscape of South Africa and providing the youth of the country with equal opportunity.

Cricket remains an incredibly expensive and difficult sport for anyone to break into, all over the world. Not only is equipment, especially for batsmen, expensive, but the technical coaching required plays a far more important role than in any other team sport. Mass participation is simply not enough and the fact that certain pockets outside of so-called “privileged” communities have produced the bulk of South African cricketers of colour is evidence of that.

Langa is well-known for having a strong cricket culture – Bavuma, Thami Tsolekile and Malusi Siboto are all from the same street. Alviro Petersen, Ashwell Prince and Robin Peterson are all from Gelvandale Cricket Club, where West Indian Eldine Baptiste was the overseas pro and a coach. For Bavuma to get where he is today, he had to move away from Langa to Johannesburg and attend St. David’s to refine his cricket. He’d made the South African schools team as a youngster as a result and has kicked on since then.

Central to Bavuma’s development was Lions coach Geoffrey Toyana and former South African bowling coach, Vincent Barnes. Barnes currently heads up Cricket South Africa’s High Performance centre and has worked with Bavuma on a number of A-team tours. The pair first met in 2011 and Barnes was immediately impressed with Bavuma, especially in the shorter format.

Bavuma hit an unbeaten 57 off just 31 balls against an Indian attack that included a young Umesh Yadav and Varum Aaron to help guide the emerging South African team to a four wicket win. He has always been a hard worker who spends a lot of time in the nets, but Barnes felt the intensity was lacking to match conditions. With a bit of encouragement, Bavama started upping the intensity and, in 2013, his moment finally came.

On a turning wicket in Rustenburg, again against India, Bavuma made a duck in his first innings, plodding and prodding and after a few wise words from Barnes, the youngster responded with 65 in the second innings.

“That 65 was probably the best knock I’ve seen him play. I know he scored a 100 at Newlands, but that knock is where you could sense that he realised he’s a good player and he can kick on,” Barnes told the Daily Maverick.

A year later, Bavuma made another big hundred for South Africa A, against Australia A, resurrecting the innings from 59-4 to 532-8 as he combined with Rilee Rossouw to grind Australia into the dust.

“He works exceptionally hard and he puts a lot of pressure on you at a coach because he demands that you give him what he needs to get better.”

That hard work has paid off, but it has not been easy. Prior to this Test and even prior to this series, Bavuma had many detractors. Some said he was too short. Others, including former England captain Nasser Hussein, said in not so many words, that he is a quota player. But watching Bavuma, resolute, resilient, compact and fearless, you would know that he is none of those things. Even when Ben Stokes, all in the spirit of sledging of course, had told him that he “was absolutely shit” after Bavuma inside edged Stokes for four, Bavuma kept on going.

His compactness does add some extra challenges and while he admits that at the start of his career he was trying to play shots that weren’t suited to his height; he has come a long way since then. Watching England’s lanky bowlers try to take him on and unsettle him was almost comical. They simply had no clue. Bavuma was the Jerry while England’s bowlers were Tom. Cunning, feisty and completely unfazed by their hype.

There is no doubt that Bavuma is a beacon of hope for other youngsters and the poster boy for what can happen through streamlined development. But, he is also a reminder that from grassroots level, much more can to be done to ensure the future of South African cricket becomes more inclusive. DM