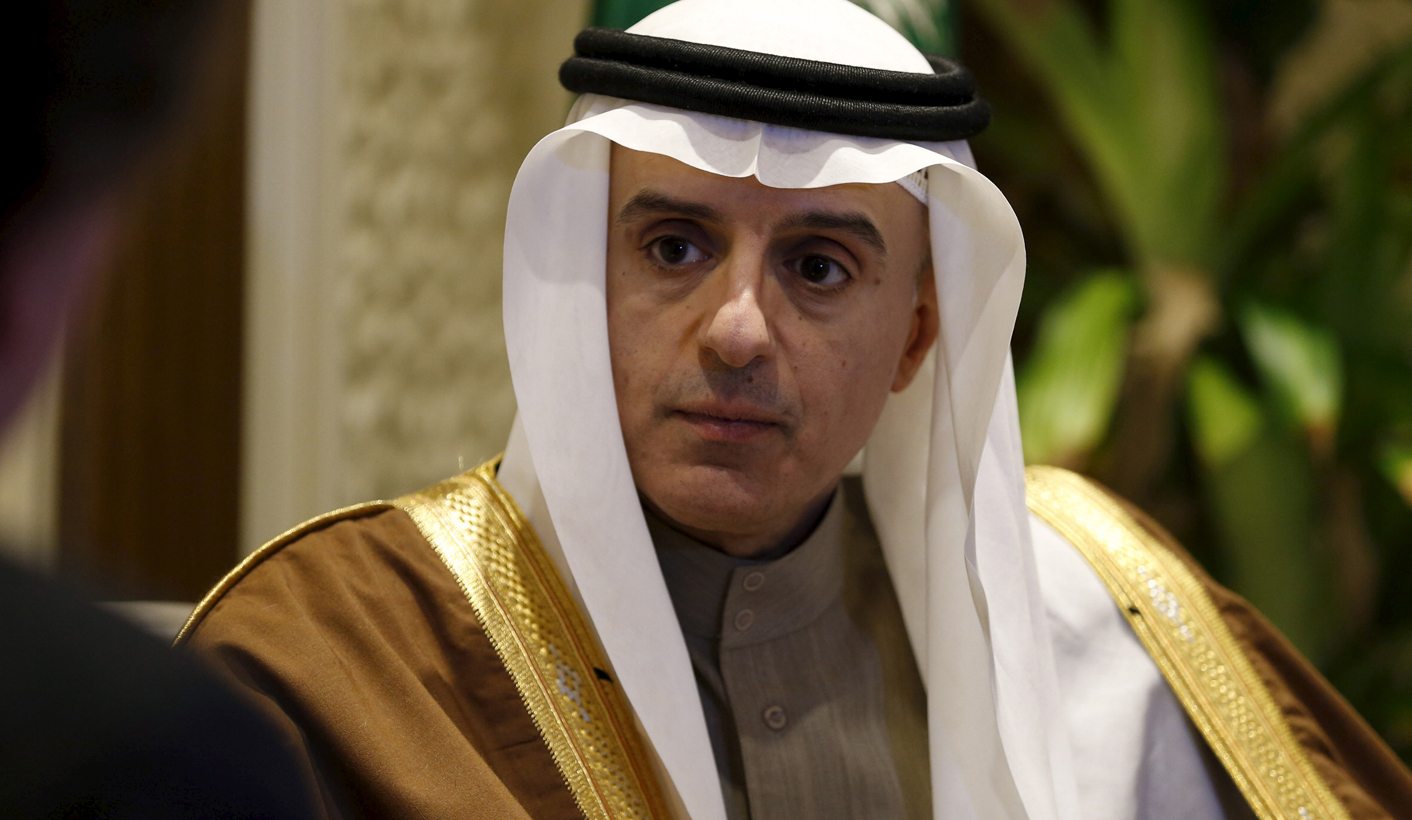 Saudi Arabia rallied Sunni allies to its side in a growing diplomatic row with Iran on Monday, deepening a sectarian split across the Middle East following the kingdom's execution of a prominent Shi'ite cleric. By Sam Wilkin for Reuters.

He blamed Iran’s “aggressive policies” for the diplomatic action, alluding to years of tension that spilled over on Saturday night when Iranian protesters stormed the kingdom’s embassy in Tehran.

The United Arab Emirates (UAE), home to hundreds of thousands of Iranians, partially downgraded its relations but the other Gulf Arab countries – Kuwait, Qatar and Oman – stayed above the fray.

Shi’ite Iran accused Saudi Arabia of using the attack on the embassy as an “excuse” to sever ties and further increase sectarian tensions, as protesters in Iran and Iraq marched for a third day to denounce Saudi Arabia’s execution of Shi’ite cleric Nimr al-Nimr.

The UAE said Iran needed to stay out of Arab affairs and not act like a protector of Arab Shi’ites. “The Arab world isn’t a venue for its blatant interference … Iran does not have guardianship or jurisdiction over a large number of Arabs for some sectarian reason,” UAE Minister of State for Foreign Affairs Anwar Gargash told Saudi-owned Al Arabiya TV.

A man was shot dead in Saudi Arabia’s Eastern Province late on Sunday, and two Sunni mosques in Iraq’s Shi’ite-majority Hilla province were bombed in the fallout from the dispute between the Middle East’s top Sunni and Shi’ite powers.

Oil prices spiked during European trading as the two big petroleum exporters traded insults and after violence hit other crude producers such as Iraq. But prices then eased back on evidence of economic weakness in Asia.

Stock markets across the Gulf dropped sharply, led by Qatar which fell more than 2.5 percent, with geopolitical jitters outweighing any benefit from stronger oil.

Crude importer China declared itself “highly concerned” with the developments, in a rare foray into Middle East diplomacy. The United States and Germany called for restraint, while Russia offered to mediate an end to the dispute.

In neighbouring Lebanon, newspapers said the spat had clouded the hopes of filling the vacant presidency that had been raised last month after Iran and Saudi Arabia both voiced support for a power-sharing deal.

U.N. Secretary-General Ban Ki-moon told the Saudi foreign minister on Monday that Riyadh’s decision to break off diplomatic ties with Iran was extremely troubling. A spokesman said Ban wanted to help ensure both countries continued their commitment to ending the conflicts in Syria and Yemen.

The U.N. chief urged Saudi Arabia to renew a ceasefire it ended this weekend with the Iran-allied Shi’ite Houthi group in Yemen that it has been bombing for nine months.

But analysts said fears of a sectarian rupture across the Middle East were premature, and the break in Saudi-Iran relations could be more a symptom of existing strains than evidence of new ones.

“The fact that the UAE was unwilling to cut off ties with Iran completely, despite the closeness of its relations with Saudi Arabia, shows the difficulty that the Saudis will have in trying to isolate Iran,” said Julien Barnes-Dacey, senior policy fellow at the European Council on Foreign Relations.

“The downgrading of ties is not fundamentally a question of responding to executions and the storming of an embassy… (but rather) a function of a much deeper conflict between the two states,” he added.

Trade between Saudi Arabia and Iran is small compared with the size of their economies, but some business is routed through the United Arab Emirates; comprehensive figures are not available. Investment ties are also minimal, though Saudi food conglomerate Savola has major manufacturing operations in Iran.

Saudi Arabia executed Nimr and three other Shi’ites on terrorism charges on Saturday, alongside dozens of Sunni jihadists. Shi’ite Iran hailed him as a “martyr” and warned Saudi Arabia’s ruling Al Saud family of “divine revenge”.

Shi’ite groups united in condemnation of Saudi Arabia while Sunni powers rallied behind the kingdom, hardening a sectarian split that has torn apart communities across the Middle East and nourished the jihadist ideology of Islamic State.

Al-Azhar, the Cairo-based seat of Sunni Muslim learning, and the Organization of Islamic Cooperation in Saudi Arabia, condemned the attacks on Riyadh’s missions and stressed Tehran’s obligation to respect the internal affairs of the kingdom.

Bahrain, a Sunni-ruled island kingdom with a restive Shi’ite majority, accused Iran of “blatant and dangerous interference” in the affairs of the Gulf Arab countries, in a statement announcing the severing of diplomatic ties.

Western powers, many of which supply billions of dollars worth of weaponry to Gulf Arab powers, tried to tamp down the tensions with Iran but also deplored the executions, as human rights groups strongly criticised Saudi Arabia’s judicial process and protesters gathered outside Saudi embassies. DM