Axing of Nene: Statements and Lies 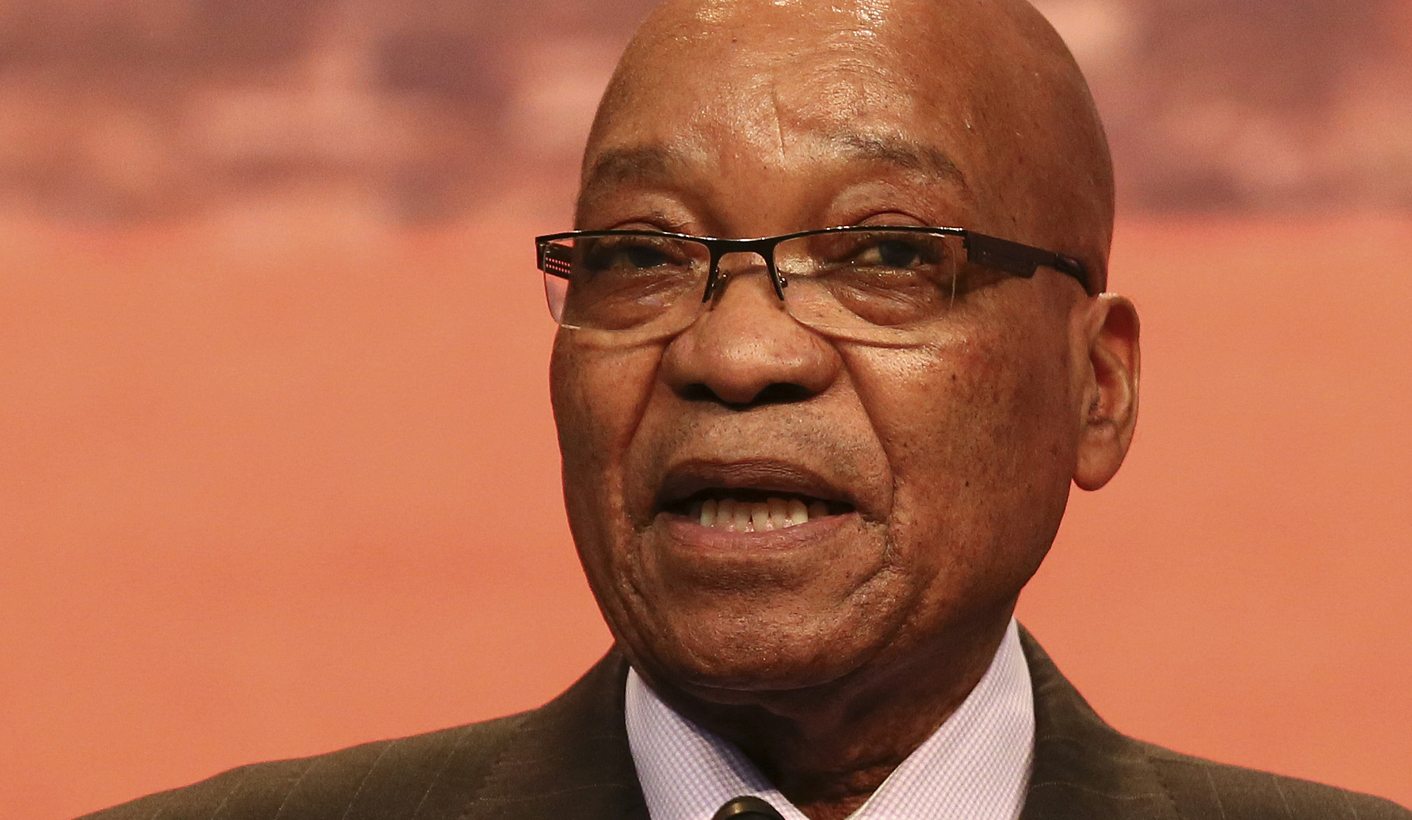 President Jacob Zuma has never been one to give the commercial middle-class media much time. And he has never felt the need to explain himself in public much either. Once, he even put out a statement saying that when it came to cabinet re-shuffles, he didn't have to explain his decisions. So it must be an indication of how the pressure is beginning to have an impact that over the weekend he released a series of statements, all relating to the sacking of the finance minister Nhlanhla Nene. By STEPHEN GROOTES.

The statements purport to either explain his actions, or to “correct malicious rumours” published by “certain media houses”. Considering where the rand is right now, just the fact Zuma is speaking might have been cause for hope. Unfortunately for the President, his statements simply don’t add up. At the same time, the one person who could actually almost save the situation, Nene himself, isn’t saying the one thing that could be said, that would show that actually what happened on Wednesday was fit and proper.

To talk to almost anyone since Wednesday (all the way through the weekend) was only to discuss one thing. What the hell is going on in government, why was Nene fired, and does Zuma really believe he can get away with this? There were other questions too, will Zuma be fired, will the ANC act, why the silence from so many people, where is Luthuli House, Nene himself, the Deputy Finance Minister Mcebisi Jonas? All of them good questions. And after two full days of silence, at around 6pm on Friday evening, after the JSE had closed, the Presidency released a lengthy statement.

In that statement Zuma committed South Africa to continuing in it’s “prudent fiscal position”. This move, he said, “does not signal a change in government’s fiscal stance”. He then went on to explain that “the urgency of the changes in the leadership of the National Treasury was occasioned by the need to send nominations to Shanghai, of the head of the African Regional Centre of the New Development Bank/BRICS Bank, to be based in Johannesburg. Mr Nene is our candidate for this position.”

So then, we finally had the first glimmer of an explanation as to why Zuma had shocked the nation, and cost us hundreds of billions of rand in the process. It was to send Nene to the Brics Bank! Why didn’t we see it before, it so makes sense! All good, peace and faith restored? Err, no.

Why not say all of that at the time? If it can be announced just two days later, surely it could have been said in the same statement announcing Nene’s departure? There may be some sort of protocol around whether countries could discuss their “nominations” in public for the bank, but there are always ways to signal around protocols. And if that was the real reason and you could not talk about it for some reason that has now mysteriously vanished, it would appear the Presidency has lost the art of pre-briefing. It is simple: you ring up a couple of journalists, the leading opinion-makers in the business media field (Songezo Zibi at Business Day and Bruce Whitfield at 702/567 come to mind) and you tell them, off the record, what is coming. You prepare the ground. Then, when the announcement comes, their articles/programmes will do the explaining for you. Worked when Trevor Manuel was a candidate for the World Bank job, why not now?

What happened last week is one the consequences of that long-standing vacancy. For an announcement as important as this, it would be mandatory to prepare the ground, to remove the sense of shock. That was not done, which makes it impossible to believe the BRICS bank claim.

In this initial statement Zuma also went on to explain how the new minister, Des van Rooyen, is supported by the director general Lungisa Fuzile. But that also rings hollow, when you consider Fuzile’s contract is up at the end of February, and there is no indication yet that he will be asked to stay on. The President also says Jonas is staying on in his position as deputy Minister. That raises another question: why was then Jonas not appointed to take over from Nene? It’s important to remember here, we still have no explanation as to why van Rooyen has been picked, and what kind of magical, previously unknown skills does he possess for this crucial post? Or is it simply because he will do what he’s told?

In that same statement Zuma also explains that no State Owned Entity will tell government how it will be supported. This is clearly code for SAA: he means SAA, or rather its chairman Dudu Myeni, is not actually in charge of things, that it’s not because of her that Nene was fired. He then goes on to say that “We assure the nation that nothing will be done, in supporting state owned entities, that runs contrary to the fiscal prudence that our country is renowned for.” Well, Mr President, it’s hard to claim that when in fact the entire treatment of SAA over the last few years, bail-out after bail-out, suggest that we have a reputation for “fiscal prudence” in the first place.

If you really want to show us that this is not the case, that Myeni is not in fact calling the shots, perhaps you could explain how she became the chair of SAA in the first place? Or, rather, just sack her. If you don’t are you suggesting that your actions don’t matter, and only your words do?

That Friday statement seemed to do almost nothing to change anyone’s view. The rand did not strengthen, and the people of South Africa simply didn’t buy it.

However, the pressure was clearly beginning to really tell, because Zuma felt compelled to issue another lengthy statement on Saturday. This was probably the first time Zuma came out and forthrightly said that he is not in a relationship with Myeni, does not have a child by her, and that she is not dictating government policy. Bluntly, where they are in a relationship or not, or have a child or not, is none of our business, sort of. But it is our business if that relationship is damaging the economy because decisions are not being made for the good of the country, but for the sole benefit of one person.

Stop for a moment, and consider what is actually going on here. We have a situation where our President has to actually put out a statement denying that the removal of a Finance Minister was because he is in a romantic relationship with a chairperson of the national air carrier. In most other places there would be no need for a denial of a claim like this, because no one would believe it in the first place. In South Africa, Zuma’s track record, and the context of this situation means he is rightfully concerned that people do believe it. (That, of course, if he was telling the truth about their relationship in the first place.)

The whole ‘explanation’ pretty much tells us everything about the Zuma Presidency.

The statement then, perhaps unwisely, goes through several “rumours”, denying them one by one. The first is that Malusi Gigaba was removed from the position of Public Enterprises because he took on Myeni. It is, of course, technically true that Gigaba was moved after an election and thus finished his term. Still doesn’t explain why he was moved though (the tourism/travel industry would probably love an explanation, too).

Then Zuma denies that SAA was moved from Public Enterprises to the Treasury because Myeni wanted it to be moved. He says it needed the intense help that the Treasury could give it.

And perhaps the most important line, the heading in capital letters :”RUMOUR: MR NENE WAS REDEPLOYED BECAUSE OF THE AIRBUS DEAL AND MS MYENI’S DISPLEASURE”. It then refers to the same explanation from Friday’s statement that Nene was moved because of the position he’s taking up at the Brics Bank. But that still doesn’t explain why we were not told this on Wednesday night when all of this was first announced. Still impossible to believe, I’m afraid.

Through all of these statements, something rather large has been missed. It’s that there is one person who could almost save this entire situation: Nene himself. In a three line statement, he could pretty much put everyone back at ease.

All Nene would have to say are these three things:

That’s all that has to be done. It’s really very simple indeed.

Then there is how this announcement could have been made. Imagine that this had happened on Wednesday night: Zuma standing on a podium, with Nene and van Rooyen. Explaining that Nene was going to the Brics Bank. Nene himself standing up and explaining how he was looking forward to the new challenge, excited, but sad to be leaving Treasury, and confident his work would be continued, etc. Then van Rooyen, with a little speech about how he was aware that he was taking on the biggest portfolio in government, saying his priorities were going to be keeping the ship running smoothly etc. No questions, thanks everyone, off we go.

Followed up by a statement from the ANC, congratulating van Rooyen, wishing Nene well, explaining this was a decision by the party.

None of that is political rocket science. It is not hard to do big economic announcements. This government, Zuma’s government has done them before.

The fact none of this happened is the proof that claims put forward in President’s statements are simply not true.

The fact that Nene has not issued that short statement is surely proof that Zuma’s explanations are false.

The fact the ANC remains silent is surely proof that Zuma’s explanations are false.

And we, all of us in South Africa, including the ANC, are much poorer as a result. DM

Julius Malema’s days of getting ready