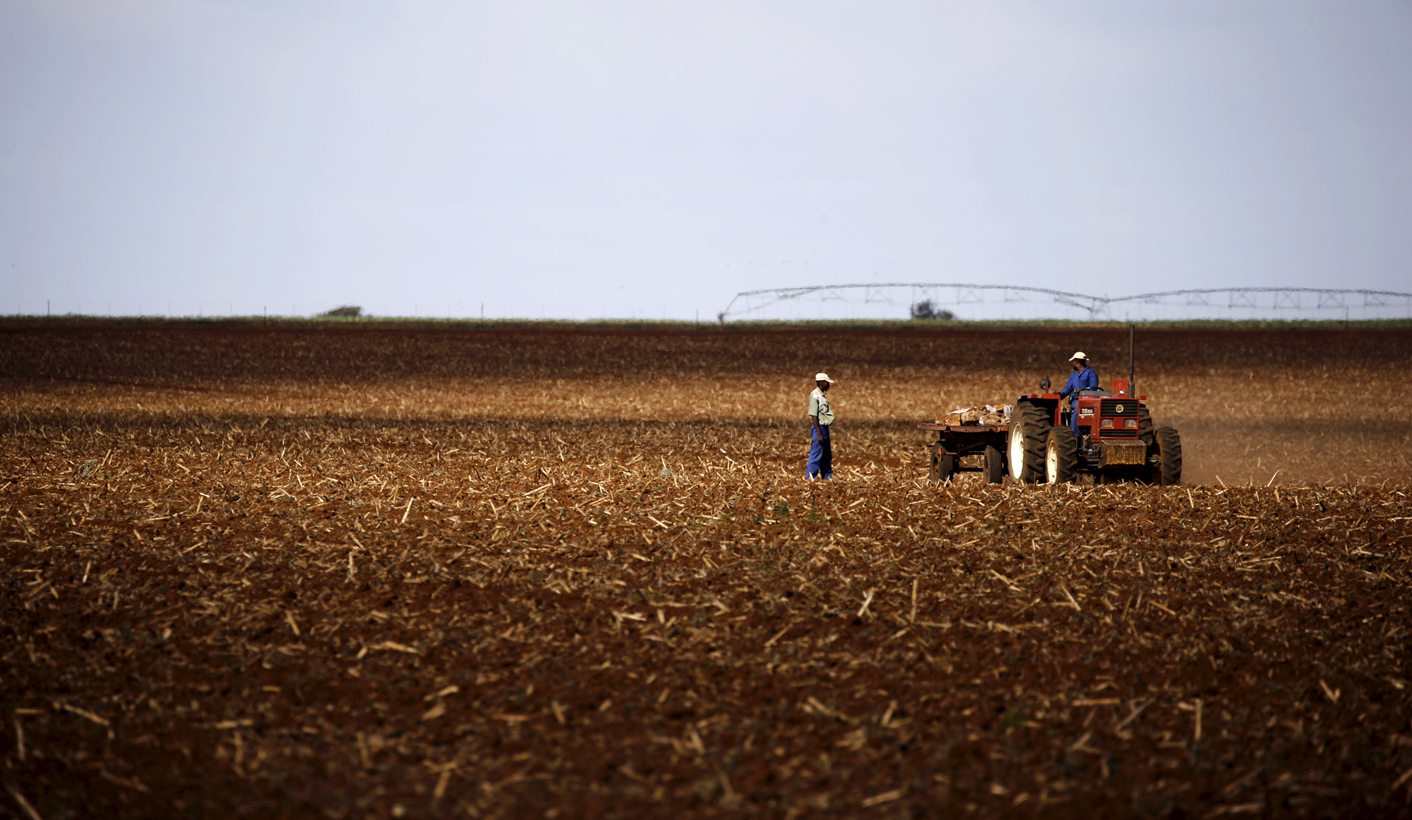 It would be awfully ironic to note it never rains, but pours for South Africa’s farmers, especially considering the drought that poses an imminent threat to food security, and has drastically diminished farmers hopes of bringing in a decent harvest at the end of the season. Employing this idiom, however, suffices when you examine the current challenges facing some of South Africa’s farming communities around Heidelberg. The drought, according to farmers, is only half of their problem. The other is mining. By BHEKI C. SIMELANE.

“It is David against Goliath, and we as the community and farmers are David, just without the right rock to throw.” These were the defiant words spoken by Haan Botha, Chairman of the Grootvlei Farmers’ Union. Botha’s words closed a meeting in Heidelberg, Gauteng, held between community, local farmers, Anglo-American representatives, and other stakeholders last week. Anglo American has already conducted an impact study, and have received the green light from an impact assessment conducted by Golder Associates to sink their shafts in the area, and demarcate it for coal mining use. According to Botha, the early stage of establishing a mine in the area is is all but complete.

The meeting, held on 17 November, arose from farmers concerns that the proposed mine was going to massively disrupt the farming sector. The area proposed for the mine is one of the best—if not the best—for the production of soya beans and maize. The land would have best suited farming, as opposed to mining, which is seen as a serious threat to both the water resources, and nature conservation. Food security will also be under threat.

The farmers feel that Anglo American has no right to use the land, which is either government or community-owned. There has been a long-standing battle between two factions for ownership. Anglo American was recently accused of taking advantage of the conflict, and pouncing silently to try and secure tenure, before the dust settled.

The Midvaal region has always served as Gauteng’s agricultural hub, and in 2014 the area was earmarked for training of new and aspiring farmers. Before Anglo American arrived, the community and the surrounding farmers were working together to teach children agricultural skills—handy, despite the fact that the new generation perceives farming as a not-so-cool industry.

Farming and mining are South Africa’s main source of economic prosperity, but feuding between farming communities and mining houses are not limited to Heidelberg. Mining houses have been accused of being insensitive to farming needs in other parts of the country, notably the Free State, Mokopane in Limpopo, North West and now Heidelberg. Farming communities, the Daily Maverick has been told, are continuously told that mining is superior to farming, as diggers are almost always given regulatory priority over planters.

Anglo American spokesperson, Shamiela Letsoalo, said the company had conducted a number of exploratory studies on the two properties the company owns in the area. Letsoalo said recent study work was conducted in 2005 and 2009. Letsoalo further said that all the studies are carried out in accordance with the requirements as set out in the Mineral and Petroleum Resources Development Act (MPRDA), and other relevant legislation as well as Anglo American’s International benchmarked, rigorous guidelines and standards.

“We would therefore like to emphasise that we are still in the preliminary phases of the application and that consultation with a broad spectrum of interested and affected parties has commenced and will continue. All the concerns will be recorded during this engagement.

She said Anglo American has been the rightful holder of the mineral rights over the coal resource in the area for decades.

“Anglo American has been the holder of the mineral rights over the coal recourse near Heidelberg for many decades. The rights were ceded to its subsidiary Anglo American Inyosu Coal (AAIC) in 2007 as part of an empowerment deal. The area comprises two distinct mining licence areas to the south of Heidelberg town. The area has deeper coal suitable to be mined through board and pillar underground method while the other has a shallower resource suitable for opencast mining,” said Letsoalo.

The Heidelberg farmers claim their investigations have revealed that the company that did the impact study on their land was not as independent as they would have liked and therefore highly questionable.

“This, when the state warned in its own report that our water tables will fall by 30 metres. Everything on our farms depends on water—households, animals and crops. Without water the farms are useless, and we will not be in a position to farm any longer,” said Botha. “Our roads will become overcrowded with heavy trucks, the school nearby will also be effected. Local rivers will have 60% less water flowing to the Vaal Dam, water of which will be polluted. The Vaal Dam is situated very close to the mine, and currently with the drought and pollution of the dam, I see disaster on our doorstep.”

Another concern with news of the proposed mine is that mine employees will want to live closer to their work place, and this will encourage a sprawl of squatter camps, which can be incubators for criminal activity.

Botha added, “We are bewildered at how Golder can give Anglo the green light, in light of all these challenges to community and farmers here.”

Golder Associates, placed the blame squarely on the Government. Golder Associates Managing Director and regional Vice-President in Africa, Dr Ralph Heath, said government departments were the responsible authorities, they should consider all issues that are raised by the interested and affected parties (including the communities), and they had the final say. The should, also, take into account the potential impacts and proposed mitigation measures associated with any new development.

“All the water use licences and EIA’s are paid for by the applicant and the independence issue is often raised by people opposed to new developments. We are a professional company who adhere to the prescribed regulatory processes and content requirements in the country with regard to water use, authorisation and environmental impact assessments.”

“As a company we maintain our integrity and stay neutral and independent, and follow the required processes.” Heath said.

But there is a lot more to lose than just farming land and water resources. According to the Grootvlei Farmers’ Union and community, there is a conservation area, the vlei landscape and tourism to add to the losses. But Botha vowed they will fight tooth and nail.

“We as the community and farmers are going to fight with everything we’ve got because once we allow the establishment of this one Anglo mine, it will only be a matter of time before we look the same as Mpumalanga,” added Botha.

Mining, especially coal mining, has caused a huge headache for farmers in Mpumalanga province, especially with water pollution and wastage. John Capel of the Benchmarks Foundation told the Daily Maverick that his outfit has conducted research on the impacts of mining around the country, and that in Mpumalanga Benchmark’s researchers had uncovered shocking impacts on agriculture. Capel said mining water consumption came at a dire cost for farmers in the province.

“Mines use huge amounts of water to clean coal and wash it of impediments, they operate often without water licences, and approval and thus compete with local farmers and more so with communities. Next year Benchmarks will establish just how communities are impacted upon,” Capel said.

AgriSA Natural Resources Director, Nic Opperman, said the Bureau for Food and Agriculture Production (BFAP) did an impact study on the effects of mining especially in the Mpumalanga area.

“Besides the Mining/Agriculture conference called by AgriSA three years ago, BFAP did a case study on the effects of mining on Agriculture in the Delmas, Leandra and Evander areas of Mpumalanga. AgriSA and the Chamber of Mines are currently busy with the process of giving effect to the Memorandum of Understanding on the issues agreed upon.” Opperman said.

Botha insisted that the Grootvlei Farmers Union and the whole Kudung community have asked why their area has been singled out, but they could not get a precise response from Anglo’s representatives.

“When we ask why our area, we do not get a straight answer; only that their main priority right now is electricity, and that they will worry about food production later. And maybe it will be too late if you look at what happened in Mpumalanga.” DM