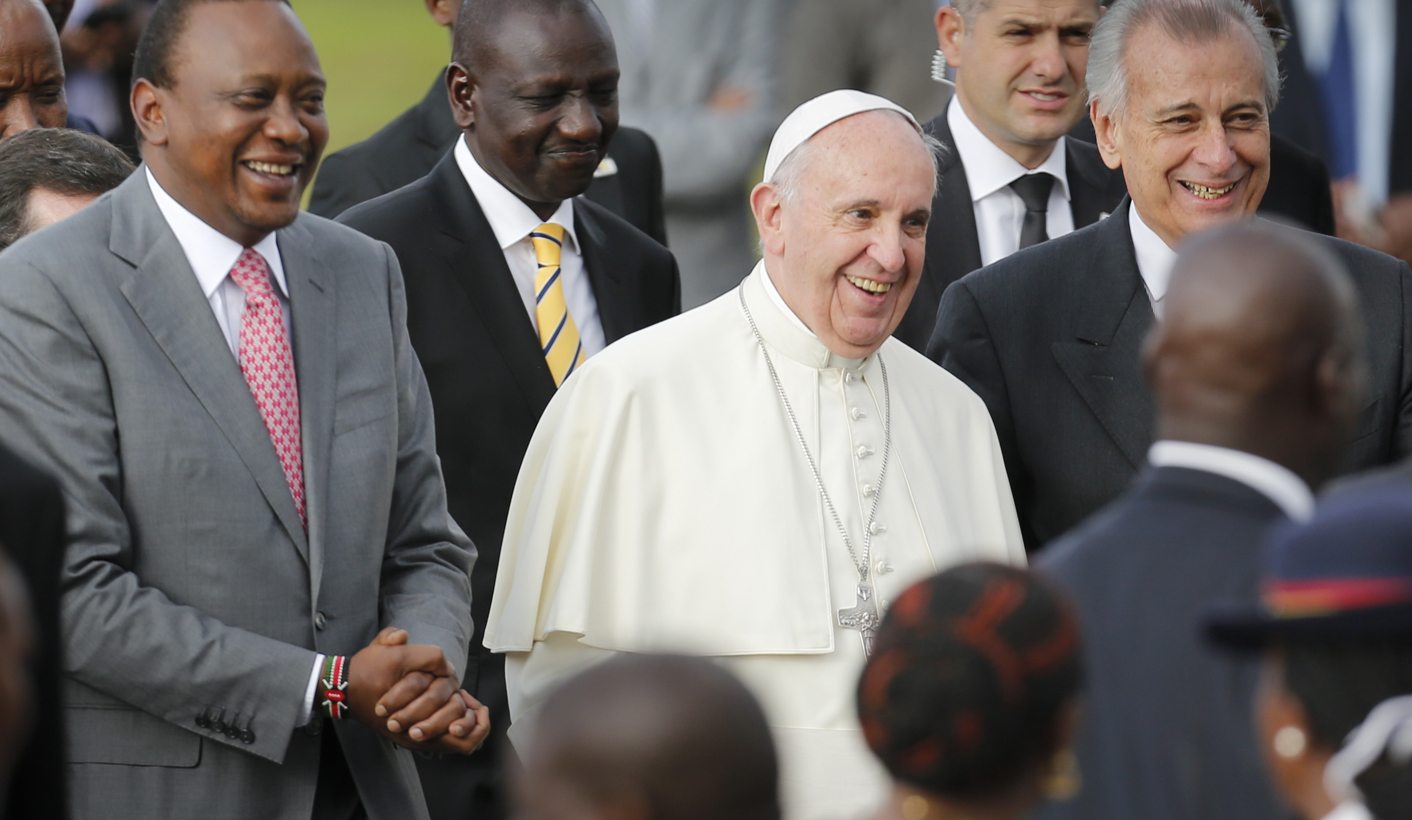 Conflict, migration, political instability, poverty, homosexuality and dialogue are amongst the many issues expecting coverage on the Pope’s visit to Africa this week. Despite questions and concerns about security, Pope Francis left Rome for a six-day trip to Kenya, Uganda and the war-torn Central African Republic (CAR) on Wednesday morning. Millions of Catholics, and a significant number of non-Catholics, are expected to welcome the Pontiff. Francis will visit a church that is growing in numbers – unlike much of the western church. He will be welcomed with jubilant African drumbeat and singing. But he will also find a continent and church that is struggling. By RUSSELL POLLITT.

Bishop Abel Gabuza of Kimberley hopes that the papal visit to the continent will energise African Catholics with his message of inclusiveness and concern for the less fortunate. Gabuza said that Africa was still looked down upon by the rest of the world, and that this visit sends an important message to Africans: “You Africans are equally important.” He said that the Pope is visiting a continent that still suffers from the consequences of colonialism, racism and so many other things.

Many Christians in Africa, like Bishop Barthelemy Adoukonou of Benin, believe that Christianity is being challenged not only by a radical and militant Islam but also the imposition of western worldviews which are secularist, hedonist, sensualist and consumerist.

Reconciliation will no doubt be on the papal agenda. Father Stephen Okello, a Kenyan priest and organiser of the Pope’s trip to that country, said that Kenya needs reconciliation. He spoke of the April attack by the Islamic militant group al-Shabab that killed one hundred and fifty, mostly Christian, Kenyan students. Fresh in the minds of many Kenyans will be the 2013 terrorist attack on the Westgate shopping mall in Nairobi, in which sixty-seven people were killed. All three countries that Francis is set to visit are conflict zones. He will push for inter-religious and intercultural-dialogue. The Vatican is concerned about the violence between Christians and Muslims and this will certainly be a topic that Francis addresses openly and often. He believes that the Church must be where people are suffering the most. He has often called for a “church of the poor”, and is now doing what he has asked others to do.

The situation in CAR is unstable. A largely Muslim anti-government rebel group, called Seleka, caused much destruction when it took over villages in 2012 and 2013. They eventually seized the capital. This led to the forming of a Christian militia, known as the anti-Balaka. The two groups signed a cease-fire in July 2014, but the conflict still continues with sporadic outbursts. The country is currently under the control of a transitional government and there is meant to be an election in December 2015.

Francis will meet with the head of the transitional government, Catherine Samba-Panza, when he arrives in the capital, Bangui. Many are desperately hoping that the Pope’s visit will bring peace; he himself has expressed this wish. Many too are concerned about his security in CAR, especially after the attacks in Paris last week and Mali just a few days ago. The French advised the Vatican to reconsider the pontifical visit. Francis, however, made it clear that he wants to go to CAR. He told journalists on the flight to Kenya that he was more worried about mosquitoes than anything else! He is scheduled to visit a refugee camp near Bangui, meet with young people and address a gathering of the country’s bishops.

On Wednesday morning, just hours before the papal jet touched down ahead of schedule at 4.30pm local time, Kenya’s The Standard newspaper was reporting that the President, Uhuru Kenyatta, had just dismissed five cabinet ministers over corruption claims. The Daily Nation reported a cabinet crackdown and reshuffle – not coincidentally – before the pope arrived in Kenya.

Business Day focussed on how the papal visit is timely in a push for the sustainable use of resources, and how the Pope had criticised trickle-down economics in defence of the world’s poor. The paper said that Francis is “an advocate of radical change in the global economic order.” Next month Nairobi will host the World Trade Organisation’s Ministerial Conference. Many hope that the papal visit will have an impact on that gathering because it is a powerful organ that makes rules to regulate global trade.

Pope Francis was warmly greeted on Wednesday evening by Uhuru Kenyatta at Nairobi’s airport. He then went to an official welcoming ceremony at Kenya’s State House. The Pope made some brief remarks about the need to consolidate democracy in Kenya and throughout Africa building “trust and cohesion amongst members of the different ethnic and religious groups on the continent.” He went on to address the question of divisions saying, “To the extent that our societies experience divisions, whether ethnic, religious or economic, all men and women of good will are called to work for reconciliation and peace, forgiveness and healing.” Francis said that violence and terrorism “feed on despair which comes from poverty and frustration.” The pontiff also touched on the traditional African values of safeguarding creation and the need to find “responsible models of economic development.”

On Thursday the pontiff has a full day that includes attending an inter-religious and ecumenical gathering in the Kenyan Capital. He will celebrate mass at the University of Nairobi and then meet with clergy. Late, on Thursday afternoon, he will make an official visit to the United Nations Office in Nairobi.

On Friday Francis will visit Kangemi slum in Nairobi. This is one of two hundred slums in Nairobi and home to over 150,000 people. It is situated in the narrow valley that slopes down to the Nairobi River. It is notorious, like slums the world over, for violence, abuse and addiction. On Friday afternoon, Pope Francis departs for Entebbe, Uganda. He will visit both the Anglican and Catholic Martyrs Shrine at Namugongo. Although Uganda lawmakers are considering new (or revised) legislation, many people are hoping that the Pope speaks out against Uganda’s infamous 2013 “Kill the Gays” law. This law pronounced life sentences for “aggravated homosexuality” and seven-year prison terms for the promotion of homosexuality. Many African Catholics subscribe to a conservative set of values and they may not easily understand (or welcome) the more measured tolerance that Francis advocates.

Besides the challenges of the continent, Francis will also hear about particular challenges facing Catholicism on the continent. These include the clash between traditional customs, like ancestor veneration and church teaching. Charismatic churches are springing up all over the continent and many Africans (and Catholics) are attracted to the healing power such congregations claim to have. Polygamy, which is directly at odds with Catholic teaching, is also practiced in parts of Africa. Nigerian Cardinal, Francis Arinze, in the preface to a book, Christ’s New Homeland – Africa, said that he believes that the Church has the task of reinforcing the conviction that monogamy is the way forward. This may not be so easy to reinforce in the midst of traditional cultures but it is an issue the Church has to face.

A number of priests have also left the Church rather than follow the celibate life of the Catholic priesthood. In a society that places high value on marriage and childbearing, the church’s discipline of celibacy is often questioned in Africa. A senior catechist in Uganda, and a signatory on a petition that a group of Ugandans hope to give to the pope, Charles Namang’are, says that priests should be allowed to marry and enjoy companionship like anyone else. He and other like-minded Catholics plan to personally deliver the petition to the pope. Ugandan Archbishop, Cyprian Lwanga, suspended Father Anthony Musaala two years ago when he wrote an open letter challenging the discipline of priestly celibacy, condemning sex abuse in the Church, and criticising priests who fathered children, and then abandoned them. Lwanga said that the letter “damaged the good morals of Church believers and faults the Church’s teaching.” He did not address the issues that were highlighted. Musaala says that he will make sure that the pope hears his voice on the issues he raised.

Despite the challenges, Africa is also a place of promise for the Church. The Catholic Church is growing in Africa and, in many places, does not have enough clergy to minister to its constituency. In Kenya 32.3% of the population are Catholic, in Uganda 47% are Catholic and in CAR 37.3%. The Church does many charitable works and, often where governments have failed, is the backbone of healthcare and education. The Church has extensive hospitals, clinics and education facilities in these countries too. In Kenya the Church runs 513 hospitals and clinics, 298 in Uganda and 52 in CAR. In Kenya the Church has 12,195 centres for education from pre-school to university level, 7,050 in Uganda and 305 in CAR.

Pope Paul VI was the first modern pope to visit Africa in 1969. Pope John Paul II travelled to forty-two African countries during his reign. Pope Benedict XVI, Francis’ predecessor, also visited Africa and said that it was “a continent of hope.” Many people who will travel to see the Pope are, at this time, looking to him for hope. He is not only the “Pope of surprises” but, for many, inside and outside the Catholic Church, the “Pope of Hope”. DM