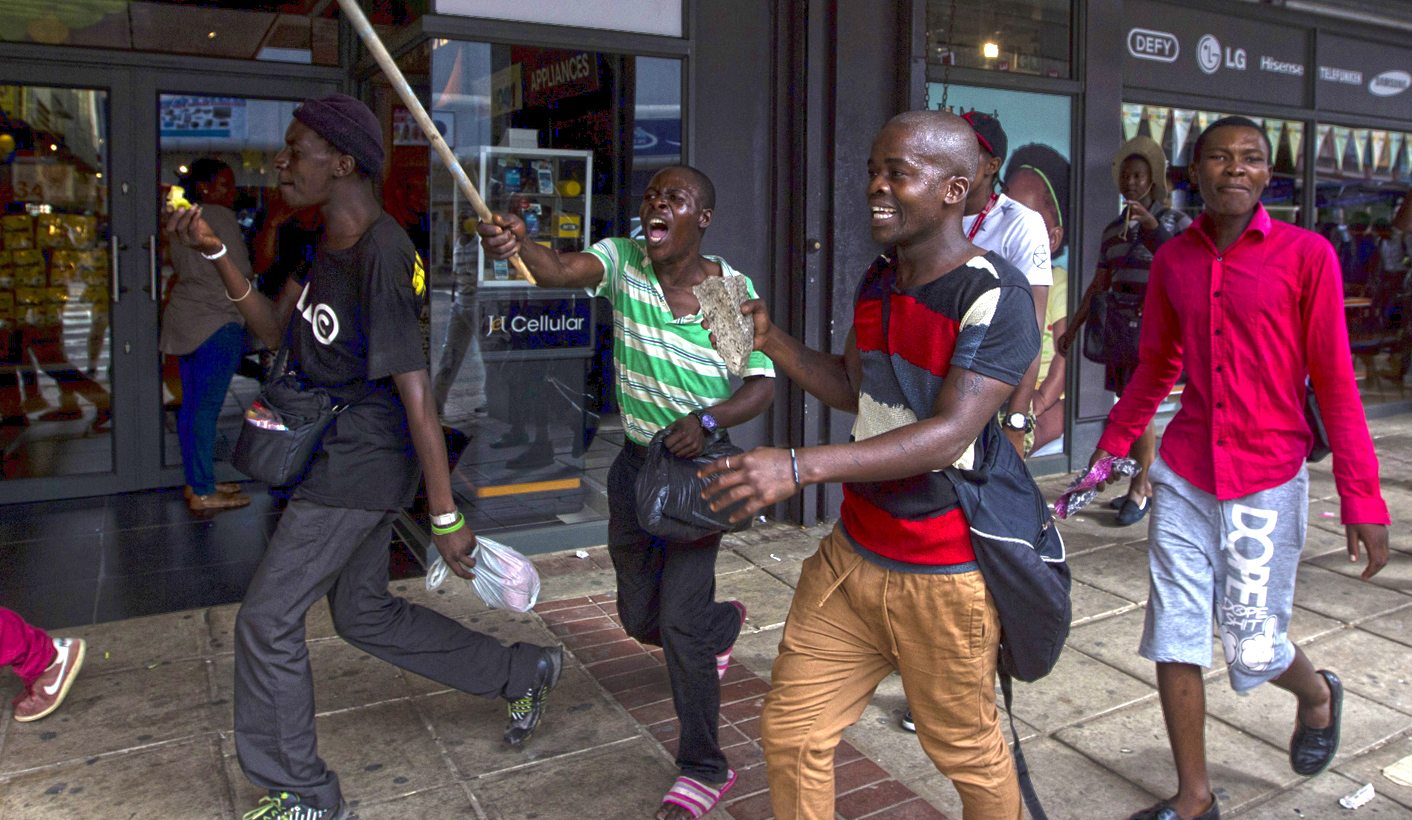 Parliament's ad hoc joint committee on probing violence against foreign nationals has finally submitted its report. There is little new in its findings, and if past reports on the issue are an indication, few of the broad recommendations will be implemented. But policy changes resulting from the attacks on foreigners this year are likely already decided: Implement harsher controls of those coming into SA while attempting to build township economies. By GREG NICOLSON.

The Parliamentary ad hoc committee on probing violence against foreign nationals was established in May, after foreigners and their stores had been targeted in Johannesburg earlier in the year, and then in Durban in April, which led to more attacks in Johannesburg. The committee included members of the National Assembly and National Council of Provinces, and made site visits to affected areas in KwaZulu-Natal, Gauteng and Western Cape. Last Wednesday, after two extensions, it adopted the final report, which will soon be tabled in Parliament.

King Goodwill Zwelithini has been criticised for sparking attacks at the end of March after he criticised foreigners on Human Rights Day in Pongola. Sonke Gender Justice’s submission to the committee says “the crux of the concerns over foreign nationals raised by the King in his speech suggest that foreign nationals have taken over and degraded entrepreneurship and the selling of goods, while making communities ugly and unhygienic”.

The Parliamentary report however does not place any blame on the King. “The centre of the violence, however, was Isipingo, which is approximately 400 kilometres from Pongola, where no violence took place. The King thereafter made another address in Durban urging around 20,000 people against attacking foreign nationals,” it reads. It does not address the fact that the King’s comments were widely reported in the media, nor that he only changed his stance after being pressured by the media and civil society.

Combating the xenophobia narrative, the report concludes, “The main causes of the violent attacks were criminal actions that started with stealing of goods from foreign owned spaza shops by South African criminals who are often drug addicts. The spaza shop owners would react by shooting at those who steal from their spaza shops using unregistered firearms rather than reporting to the police. When this happens and someone is killed, local communities retaliate by looting spaza shops owned by foreign nationals also rather than reporting to the police.”

The committee says there were five deaths directly related to this year’s violence on foreigners: two South Africans killed by stray bullets from foreigners shooting at looters, one foreigner killed pursuing a thief, and another who died when a store was set alight. Much of the report’s conclusion focuses on the resentment South Africans have towards migrants due to their own economic and social struggles. Foreigners are exploited and work for less, while South Africans are seen as lazy. There are supposed “no-go” areas for locals (the report names Mahatma Ghandi Road and Russell Street in Durban). As foreigners are isolated, they do not cooperate in business with locals and large store owners “offer the advantage of procuring goods cheaply, as well as sourcing counterfeit goods”, squeezing locals out of the market while the government offer little or no support to local small businesses.

At times it feels the report blames foreigners for being attacked. It says ex-military combatants from other countries are a risk; small businesses are being used as fronts for brothels and drug trade; many migrants are economic refugees rather than real asylum seekers. At other times it acknowledges the systemic challenges: urbanisation and pressure on service delivery; the difficulty of foreigners to get permits, forcing them into the informal market; foreigners having to rent RDP houses, which some then use to open stores.

The report finds that the quick and organised response from government and stakeholders helped prevent violence escalating to 2008 levels, and that many locals and foreigners live peacefully together across the country. Most of the report focuses on the challenges resulting from large levels of migration, which have largely been unplanned, controlled or catered for, questioning criticism that South Africans are xenophobic. But the ad hoc committee admits “there are some people within South African communities who use derogatory language such as the word ‘kwere kwere’ when referring to foreign nationals. Such a tendency is not different from using the ‘k’ word which was used by white people in South Africa when referring to black people during the apartheid era, and the other ‘c’ word when referring to Indians”.

While listing the different initiatives around the country, the report does note that there has been a lack of implementation of any social cohesion programme, even after the 2008 attacks and that foreign nationals are not integrated. “The predominance of illegal entries in the country accentuates the difficulty in government planning to provide services for them.”

Among some of the submitted recommendations, the Consortium for Refugees and Migrants in South Africa and Hate Crimes Working Group suggest adopting hate crimes legislation so motivation for the violence can be properly measured. Cosatu recommends mobilising foreigners to combat exploitation. Legal Resources Centre said there needs to be better information on violence against foreigners, threats to foreign women should be alleviated, and the state needs to meet its constitutional obligations.

The People’s Coalition Against Xenophobia said “much of the resurgence of violence against foreign nationals in South Africa is due in part to the failure, from within and outside of government to learn lessons from the attacks which took place in May 2008. Since those attacks, there have been consistent and continued attacks against foreign nationals, particularly shop-owners in our communities.”

“Many factors have contributed to the large-scale attacks of 2008 and 2015, as well as the ongoing incidents of violence against foreign nationals, albeit on a more muted level, between those two events,” the coalition of 11 local civil society groups continues. “One of those factors is no doubt criminality and the Coalition would concur that there are criminals who have used the situation to their own advantage. But this does not mean that the original impetus for the attacks was not xenophobic in intent and it must also be stressed that criminality and xenophobia are not mutually exclusive.” It recommends more community engagement, support for community-based organisations, the promotion of a discussion around social cohesion, and for the Department of Home Affairs to ensure the right to human dignity is met.

The ad hoc committee’s 13 recommendations are broad. They include promoting peace and stability in migrant-sending countries, working to protect vulnerable communities, monitoring counterfeit goods and increasing education on the rights and responsibilities of migrants. Small businesses should be better supported and social cohesion should be promoted across the country by all government departments, including through inter-cultural sport. The report and recommendations raise many of the same issues that have largely gone unheeded. Little attention is given to issues of “social cohesion” and the general attitude of the government to deny xenophobia exists. Policy action resulting from this year’s attacks on foreigners appears to have already been decided.

The ad hoc committee gives considerable space to responses from government. The Presidency, on behalf of the inter-ministerial committee on migration (IMC), said the violence was due to increased competition for resources after an increase in unskilled migrants since 2008 while growth and employment were suffering. Foreign-owned stores use models to “discourage competition such as forming monopolies, evading taxes, avoiding customs and selling illegal and expired goods”, according to the IMC submission. At the same time, Zimbabweans, Mozambicans, Basotho and Malawians dominate low-skilled jobs.

The IMC, which includes 14 ministries, said some of the challenges include that no reservations have been made on international agreements, like United Nations conventions, asylum seekers are allowed to work, there’s a lack of provisions with other African countries to share the burdens of migration, and people are overstaying permits. A green and white paper are in the works from the Department of Home Affairs, as well as the Refugee Amendment Bill and changes to the Border Management Agency. While past reports on attacks against foreigners have largely been ignored, the state’s response to the issue already seems clear: tighten up controls on migrants while beefing up border security and trying to, or talking about, investing in township economies. DM