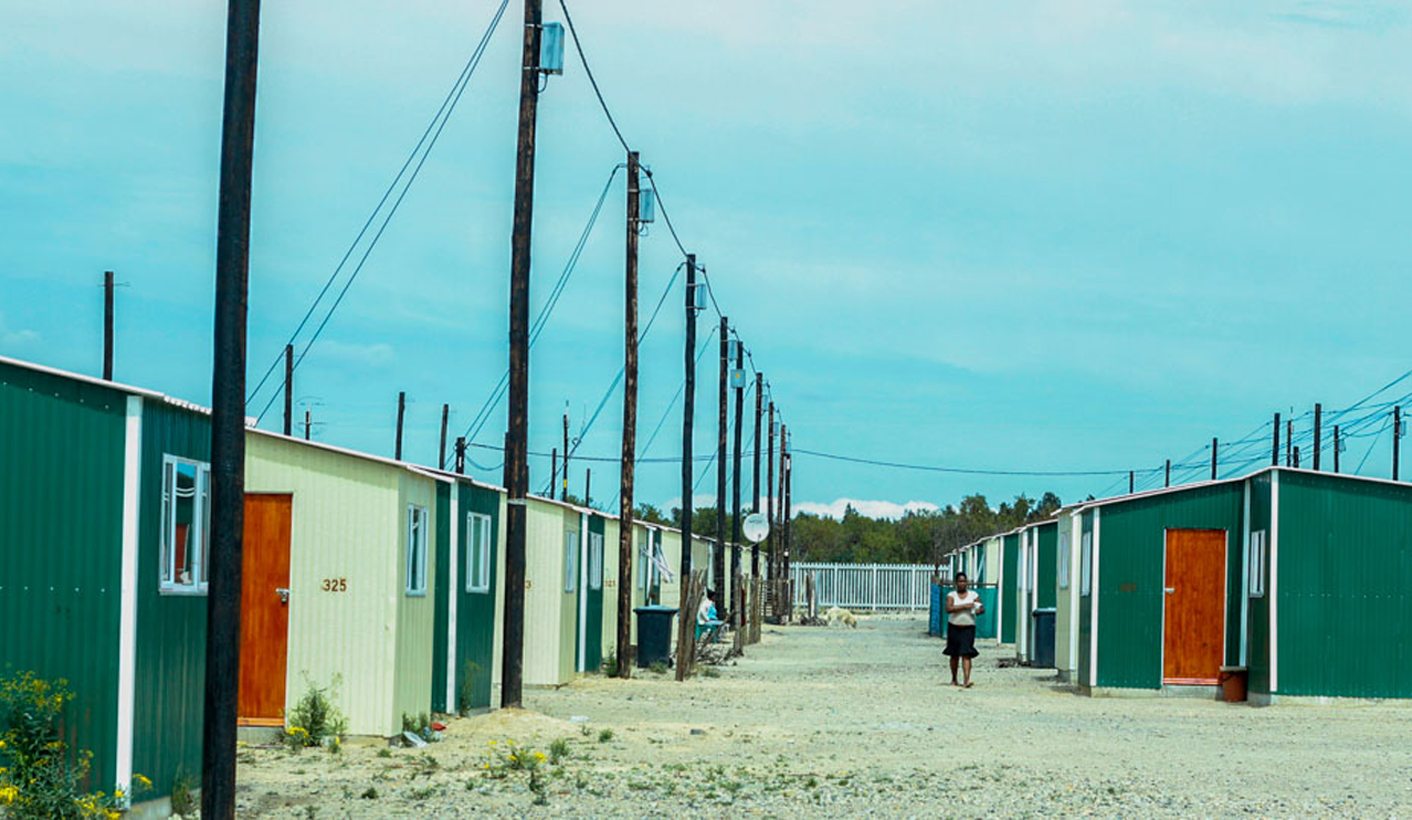 Audits found that most residents had no access to jobs. Their homes are situated about ten kilometres from the nearest suburb. Many residents foraged for food on rubbish dumps, and on scrap metal to sell for cash. By BARBARA MAREGELE for GROUNDUP.

Overcrowding, high unemployment rates and fire safety are just some of the concerns raised by a social audit of Wolwerivier, a low-cost housing project north of Cape Town. The detailed report also describes positive aspects such as the provision of utility services and improved living conditions. The audit was conducted by Wolwerivier’s residents, Ndifuna Ukwazi (NU) and the Social Justice Coalition (SJC). It was released on Saturday.

Wolwerivier was built by the City of Cape Town on Wolwerivier Farm, about 30km north of the city centre, and about 6km east of Melkbosstrand. Residents of several nearby informal settlements are also being relocated here. However, the project has sparked a lot of controversy in recent months. The development currently consists of several rows of green and beige small corrugated houses. There are only unmarked gravel roads with no vegetation, and a small community crèche located at the entrance of the settlement. “It’s like they just dumped us here,” says Wolwerivier resident, Nowongile Swebe.

Swebe, said she shared the small open plan unit with several family members. She was among nearly 50 Wolwerivier residents who attended the release of the report. City officials who were invited to attend the event were not present. Mayoral committee members for human settlements, Benedicta van Minnen, and for social development, Suzette Little, said in a joint email to GroundUp that as the City was not included in the auditing process, they did not attend the public hearing.

“The accepted methodology for a social audit is a collaborative process. The City was not afforded the opportunity to take part in this process,” they said.

They informed NU that they would not attend. The questionnaires used in the audit were developed from concerns raised by residents. The 2012 Environmental Authorisation report on Wolwerivier was also used. The 60-page document, published by NU, includes a list of findings and recommendations to the City. Among the concerns raised in the report was fire safety. On Sunday, the day after the release of the report, the units of two families were gutted by a fire. Residents believe the fire started because of a faulty electricity box in one of the units. The nearest emergency services arrived after the fire had been extinguished by community members. Another concern was that households were grouped in the same units, with one open-plan living space, leaving little to no privacy. A housing survey conducted by the city in February 2015, was used to compile the beneficiary list, and as a result about 50 Skandaalkamp residents were not allocated units.

“Residents could build extra rooms onto their shacks in Skandaalkamp, which made this possible. Boarders living with a family were also not allocated their own units. Young adults were also grouped with their relatives and parents. The households are too small to accommodate families like this in a dignified way,” states the report.

Johanna Fortuin is one of the residents from old Wolwerivier Farm who were told they would be allocated houses in the new development. Fortuin, 63, has lived and worked on the Farm since the age of 17. Her home is one of several dilapidated structures situated a few meters from the new development. Fortuin’s home has no electricity, most of the walls have large cracks, and the roof has holes.

“We all signed papers earlier this year. They told us once these people have moved in, then we will be moved into the new houses. We are still waiting. There are so many houses standing empty there. I’m old and my house is broken. Where must I go?” she asked.

Fortuin and a handful of the farm residents said they were attending the event on Saturday in a bid to find out more about the status of their relocation. Of the 156 units surveyed, 25 had more than four people living in them, but the occupational agreement advises against alterations, stating that this could “compromise the unit’s structural integrity.”

Resident Ayanda Qobongwana says the lack of privacy in the units is a serious problem for most of the families.

“My five-year-old daughter has to go outside when my husband needs to wash. We live with my grandmother in a very small space. There is no privacy when I want to be with my husband,” she says.

To complicate matters further, the relocation of seven Blikkiesdorp families in September 2015 caused tensions in the community.

“Residents felt this was unfair considering some of their own community members have not yet been allocated houses,” the report states. This while other units still stand vacant and would-be occupiers have been evicted in the past.

The audit also found that most residents no longer had access to employment opportunities. The development is situated about ten kilometres from the nearest suburb. Many of the Skandaalkamp residents relied on the Vissershoek dump to collect food to feed their families and on scrap metal to sell for cash.

“The City officials were asked about access to work a number of times and were unable to provide answers. The City clearly ignored valid objections that were raised during the public participation phase,” the report states.

“It’s so far from everything. I don’t always have money to take the taxi to buy something to eat,” says Swebe.

Of the 168 residents surveyed, 90 indicated they had access to some kind of work before the move, while only 43 said the same applied at Wolwerivier.

“I’m happy that now we have our own water and electricity, but it’s like we were dumped here,” says Swebe.

Most residents indicated that were happy to have water inside their homes, but that it was difficult for larger families to bath in privacy. There are no showers in the houses.

“The City should update residents on the progress of the tender and install showers as soon as possible,” recommends the report.

The audit also found that Wolwerivier is a less polluted and healthier living environment than Skandaalkamp. However, although there is electricity, a lack of street lights creates issues for safety and security.

An Environmental Impact Assessment for the development of a relocation camp was completed in 2011 and in 2012. The Western Cape Government granted the City an Environmental Authorisation. Tenders for the civil engineering and construction of the houses were awarded over the next two years.

During this time, residents of several nearby informal settlements were included in the relocation plans. The first families from Richwood were moved to a site near Wolwerivier in June 2014. They have still not been moved into houses.

In 2014, the City announced the construction of 500 units at Wolwerivier. In February 2015, a survey conducted by the City found that about 286 households in Skandaalkamp would each be given homes. Dozens of households from Skandaalkamp near Malmesbury were moved to the Wolwerivier in July this year. DM