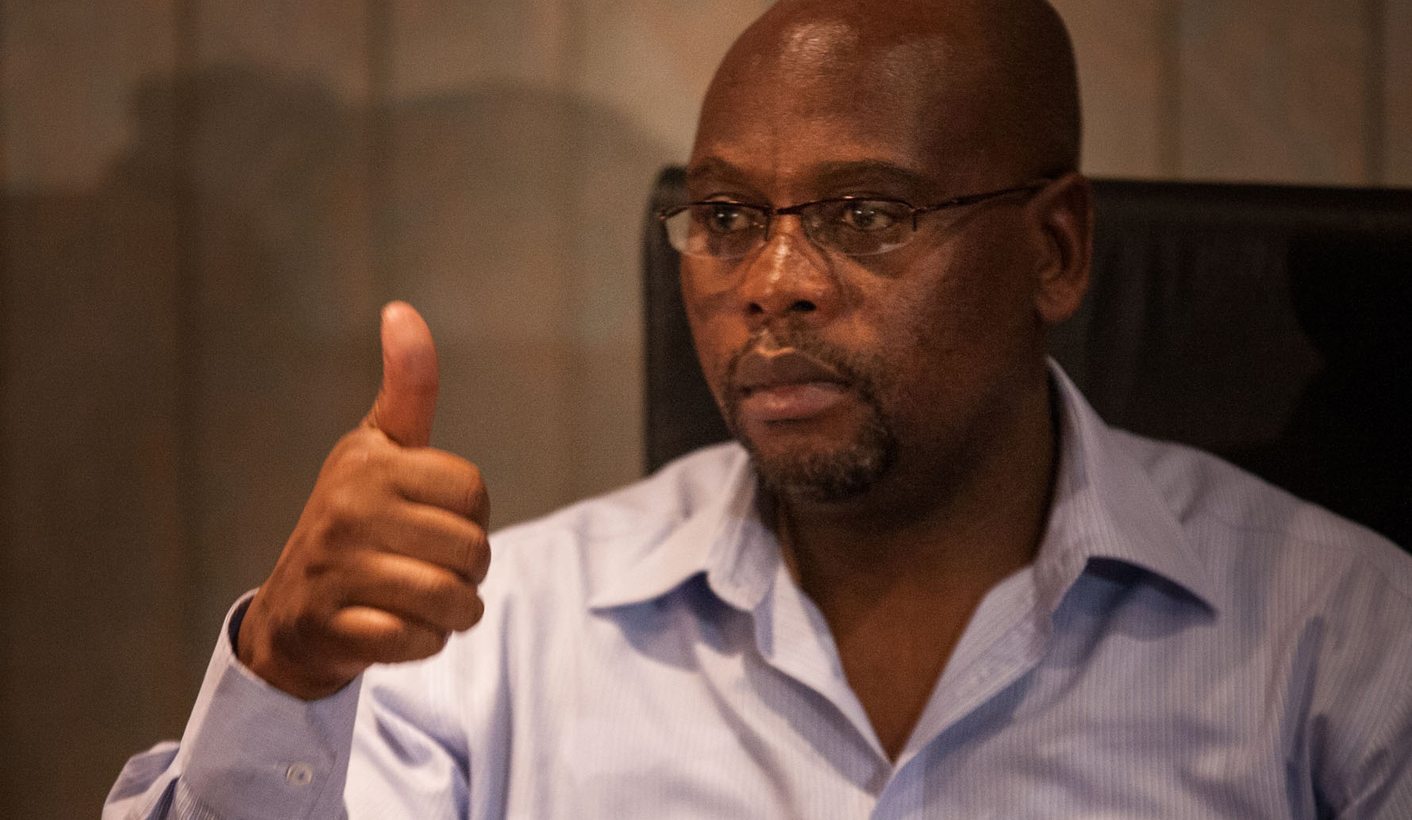 There can surely be no doubting the fact that while the star of Zwelinzima Vavi has been totally eclipsed in the Cosatu planetary system, the Sun that is S'dumo Dlamini is now in control. Forced to take a minor, relatively quiet role while Vavi was general secretary, he is now the public face of the Federation. Addressing Cosatu's congress on Monday evening, it was only human for him to see the moment as a symbol of his ultimate victory over Vavi. But he also clearly believes the battle for Cosatu is still not over. By STEPHEN GROOTES.

It says much about the scale of the victory of the Dlamini faction within Cosatu that almost all of the positions of the National Office Bearers (you’ll have to work out the abbreviation for yourself) were uncontested. It now seems certain the collective he has headed will be back for another term. As he himself said during his address, this has been a successive team, because despite being elected as long ago as 2009, they are all still there, minus just one member. Well yes. But that member is six foot four, and he left a massive hole in Cosatu’s aura.

Dlamini was rather honest in reflecting on some moments of his epic battle that led to Vavi’s dismissal and the expulsion of NUMSA. He says that no-one in the top leadership can say they were not left affected by the battle, that Cosatu was being pulled “left and right”. (Well, actually, it was only being pulled Left, but never mind that.) He also suggested in his speech that it was very difficult for the federation to be dragged off to court all the time. When a leader complains about people exercising their democratic rights, it is usually a bad sign.

That tendency was then echoed right towards the end of Dlamini’s speech, in which he made a curious proposition. He said that if it were in his power, he would find a way to empower Cosatu’s Central Executive Committee to mandate those NOBs (their abbreviation) to intervene in the affairs of a union. This would be subject to that union’s leaders first refusing to speak to provincial or regional Cosatu leaders in their respective locations. Dlamini spoke about the pain of watching a union falling apart, and being powerless to do anything about it. Just at the moment, SATAWU has split twice, while other unions are also battling. There is a huge fight about money at CEPPWAWU that could do with some intervention, and other unions face similar, if lower-key battles. So, on the surface, it appears to be a good idea.

The problem is, it also looks like a power-grab. At the moment Cosatu unions choose to belong to the federation; they have autonomy, and they are all completely independent. Who would decide when one needs intervention? What if the divisive issue is, as it was for NUMSA, whether to stay within Cosatu? What then? Would national leaders be able to intervene, to change that decision? Could the final outcome be a group of unions just beholden to six leaders all sitting in New Cosatu House?

It’s hard to see how unions would not be losing big chunk of their power, were something like this to ever go through. On the subject of money, Dlamini was very strong, saying that “money will destroy us. It will even destroy unions.. .when you get yourself into the degrading position of being bought with money you lose your soul”. While communists generally do not smoke the opium that we have souls, he is absolutely right to make this point. He is singing a hymn sung by many other alliance leaders, who claim that internal elections are being bought and sold for money. The problem is how to fix it. It is difficult to tell relatively poor delegates to turn down cash, and it is exceedingly hard to stop those with the cash from doing it.

While Dlamini kept things in the real world for most of his speech, he seemed to slip into a different universe completely when he started to claim that people “in the North, in America” want to “destabilise our federation”. He said that when the US embassy asked Cosatu for a meeting to discuss this claim, they refused, and then the US put pressure on them through government. At that meeting, his leadership showed the diplomats proof of the claim, which was accepted. But, tantalisingly, he will only share this proof with the incoming Central Executive Committee.

It is difficult to not just put your fist in front of your mouth and mutter “hogwash” to this. Why would someone in “America” want to do this? What would be the benefit? There are much easier ways to make an impact in this country than to go through Cosatu. And it seems Dlamini and co have fallen into the same trap that catches so many believers of conspiracy theories. That of assuming they are important enough for the world’s supreme military and economic power to spend time and effort to derail an already ailing workers’ federation at the other end of the world. It is like people who think that the NIA taps their phones; implicit in the claim must be the belief you are so important that someone, somewhere will spend time on you, therefore conferring on you the true sign of VIP-ness.

Still, it’s a useful conspiracy theory, that we are going to hear more in the coming years from other alliance partners; probably because “white apartheid monopoly capitalist – media dominator” is not quite as scary as he used to be.

While the ANC will probably have been very comfortable with almost all of this speech, its cadres certainly sat up and noticed when Dlamini started talking about plans to change pension funds. The National Treasury is looking at changing the retirement fund system, that would see most of this money having to be re-invested. Presumably the idea is to make sure people have more money over the longer-term. But the short-term consequence would be that it is impossible for workers to cash in their pensions when they want to. There have been suggestions from some Cosatu officials that this could lead to the federation leaving the alliance, or refusing to campaign for the ANC in next year’s elections. Dlamini did not pull back from those comments, but said they were a warning to the ANC. That is quite well calibrated, and bound to make some people think again.

Overall, Dlamini, and his speech, received a warm reception, as one would expect. He has the full support of almost everyone there, except of course, for NUMSA’s old ally, the Food and Allied Workers Union. But, as he spoke, one could not help feeling that some of the old vibe of Cosatu has gone forever. It has lost its mojo, its sense of mission. It is not just the absence of Vavi and NUMSA. It is not just that it is nursing wounds that will take more than just time to heal. Something has truly and finally shifted. The new players are in the field, and the game itself has changed. Cosatu is just never going to be the same again. DM