Food as a human right: Growing food by the people for the people 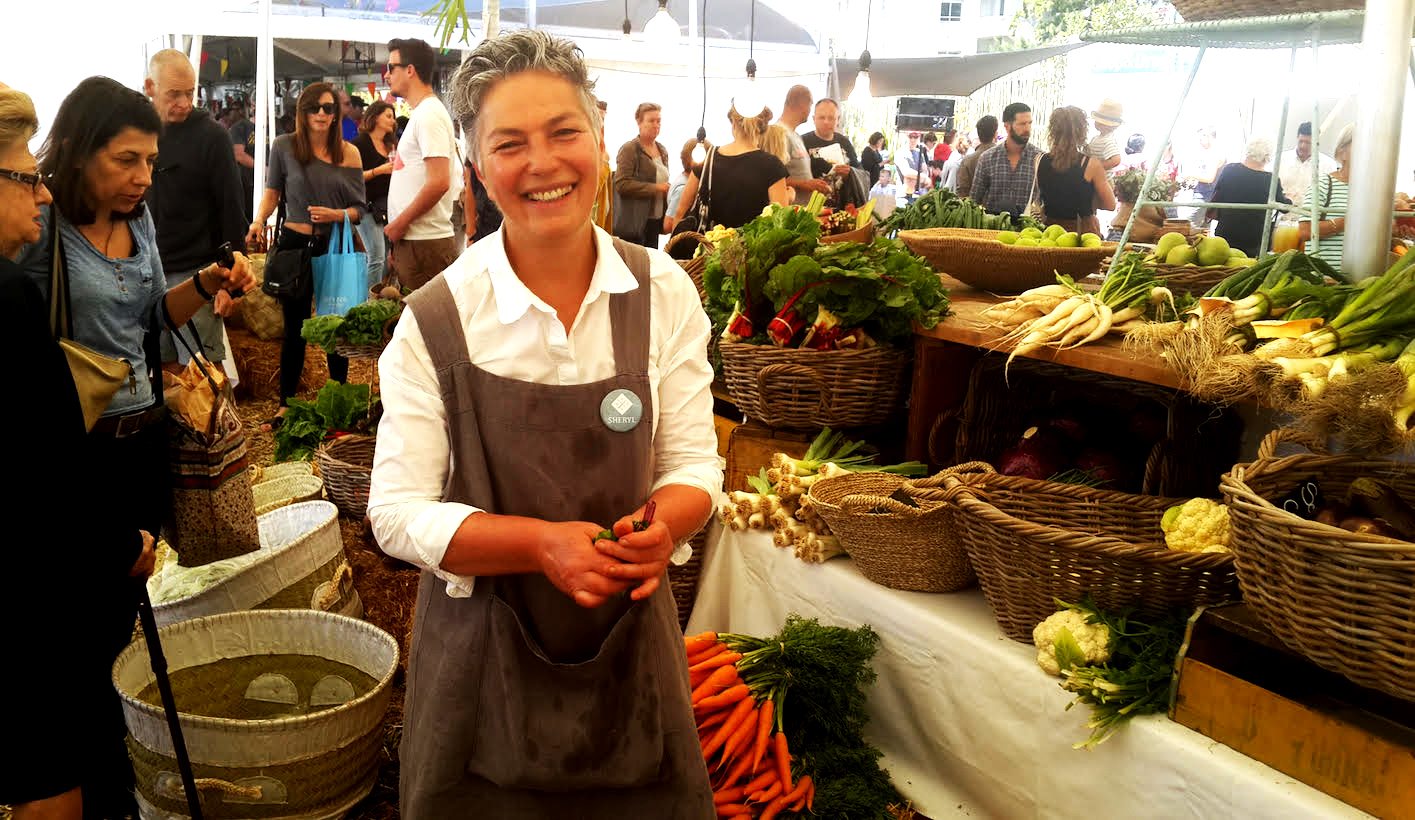 The Oranjezicht City Farm Market in Cape Town has gone in four years from being a small volunteer community project to a popular city market pumping R30 million into the local economy trading only one day a week. It has also created 200 jobs and supports around 15 small farmers in the region. One of its visionaries is former Cape tourism head, Sheryl Ozinsky, who has a plan to create sustainable, local, small scale farming in the region enabling the provision of quality, affordable and nutritious food. And she's making it happen. By MARIANNE THAMM.

Sheryl Ozinsky in full stride is a formidable force. Once a highly paid sustainability consultant and former head of Cape Town Routes Unlimited, Ozinsky has a new life as a committed food activist and overseer of the lush non-profit Oranjezicht City Farm (OZCF) as well as the Oranjezicht City Farm Market which now pumps around R30 million back into the local economy, and that’s trading only one day a week.

“Nobody is standing up for our food system. A few people have written about it but nobody cares vehemently enough. We should be demonstrating in the streets. We all live in our separate little worlds,” says Ozinsky.

In just four years, the piece of historic but neglected suburban land, used as a bowling green in the 1950s, has been turned into the community OZCF which not only provides food for the once-a-week popular market – now located at Granger Bay at the Waterfront – but also employment for around 200 people, including farmers and around 60 local traders who sell their produce and products at the market.

OZCF also serves as a teaching and educational project with over 1000 learners from 23 schools visiting the venue in 2014. It has partnered through OZCF volunteer, Rachel Harvey, with Streetscapes which creates work opportunities – essentially food gardening – to address chronic homelessness in Cape Town, and has developed two garden sites in the city for this purpose. Ozinsky’s plans are to collaborate with other emerging small farmers in the region, and in order to accomplish has helped launch the South African Urban Food and Farm Trust, with the aim of starting 100 similar community supported agriculture (CSA) projects across the region.

“CSA projects, where you pay in advance, are very popular. You pay the farmer to produce food for you. In return you get a weekly basket. Like Harvest of Hope (a hugely successful initiative by Abalimi Bazekaya), but different because you are taking the risk with the farmer. Farming is a risky business. So we are trying to do a pilot project now with farms in Stellenbosch,” Ozinksy told the Daily Maverick.

The story of the Oranjezicht City Market has its origins in a crime, an armed robbery in fact, that occurred one night when Ozinsky and her partner, Caz Friedmann, were attacked in their home. At the time they had just relocated to the suburb from Rosebank.

“After the trauma and the anger I sat thinking what am I going to do about it? Was there a neighbourhood watch? Was there someone who worked with police? There was nothing. No one was looking after the community. I thought I can’t be this person who complains and does nothing.”

Ozinsky soon set about involving the community in their own suburb setting up a neighbourhood watch, liaising with the local police station, and collecting data on crime.

The overgrown bowling green had once been part of the original Oranjezicht Farm owned by the Van Breda family in the mid-1700s, and which later became the suburb of Oranjezicht in 1901. Ozinsky set about meeting with locals who could help her with the vision including former organic farmer Mario Graziani, American expat Kurt Ackermann, landscape architect Tanya de Villiers, and designer Mark Stead.

“That’s when we decided that there was a project here waiting to happen. But I didn’t believe I would get the piece of land from the city. I went about making enquiries, and they said it would be a possibility, but that I would have to go through Heritage Western Cape, and jump through 25 hoops. After I knew it was possible I was prepared to jump through these hoops. I knew it was worth the effort. You have to evaluate, is this a Don Quixote project or is this a project with a 51% chance of success? If it is 49% you don’t do it.”

What Ozinsky wanted to prove was that there are possibilities of creating simple alternative food systems that will provide nutritious affordable food. Four years later with over 10, 000 hours of volunteer time, the OZCF has become a local showpiece.

“One in five South Africans is food insecure. Nutritious food and access to this is a human right, yet there is no food policy. People can’t buy nutritious food because it is too expensive, and all the cheap food is filled with GMOs, and we don’t know what anymore. We can’t trace where it has been planted.”

There is no organic certification or policy that supports it in South Africa, and Ozinsky, as well as other partners, including Green Road and Ethical Co-Op, are attempting to work on a Participatory Guarantee System (PGS) where consumers and farmers “go to farms together” and develop a relationship.

“I can count on one hand farmers who grow organically. The PGS thing is massive and needs to happen. We need to encourage these farmers.”

Ozinsky, apart from selling produce from the Oranjezicht Farm, buys additional produce from 15 other small scale farmers for the Saturday market.

“Considering the demand, we could trade 7/7. I can’t get enough of the stuff. I can’t get organic vegetables. I can get 100 carrots supplied to me once a week. These are also small scale farmers so I have to fetch from them with a truck.”

While there are charges that the Oranjezicht City Market is aimed at upper-end consumers, Ozinsky says, that basket for basket prices here, for fresh produce, are extremely competitive.

Her vision is to include hundreds of small-scale farmers, and to start food hubs so that these farmers can sell directly to the public. At present they are forced to go through retailers who mark up the produce. She cites Barcelona as a city where residents all live no more than ten minutes from a market.

“Rich and poor all shop for produce at the markets. The city of Barcelona understands the value of nutritious food, they subsidise the infrastructure of the markets, they have a management company that they pay to look after the market. We have allowed ourselves to be at the whim of retailers, and they decide what is grown or what gets grown. When people taste a tomato grown on our farm they jump for joy, it’s like something they haven’t tasted in years.”

Mark Harding, an out-of-work welder who studied vegetable gardening for four years before he lost his job, is one of the key farmers at OZCF, and Ozinsky would like to establish an urban farming academy where people like Harding can train aspiring vegetable farmers.

“We want curriculum-based training, and ultimately we would like to take Mark out of this garden eventually and put him in other gardens.”

Ozinsky says ideally that the Culemborg precinct on the foreshore, owned by Transnet and once earmarked for the Cape Town Stadium, would be perfect for a fresh produce market that would be more accessible to everyone in the province. Another location would be the piece of land where the Athlone towers once stood, and which is earmarked now for development.

There are existing markets in Cape Town including the Epping Market where many vendors and street sellers buy produce, and the once-popular Salt River market which has fallen into disrepair. Currently the wet and farmlands of the Phillipi Horticultural Area (PHA) – the breadbasket of the Western Cape – are under threat as the City has rezoned a sector of the district for development. A lobby group, the Schaapkraal Civic and Environmental Association, along with farmer Nazeer Sonday, is lobbying to protect the vital area from urbanisation. Sonday has asked that consumers lobby local retailers to mark produce from the PHA, so that they can support local farmers as well as for government to declare the PHA as the country’s first agricultural conservation area.

In January, Anton Bredell, Minister of Local Government, Environmental Affairs and Development Planning announced that he had decided not to approve the change of designation in the south-western sector of the PHA from agricultural to urban development, but that an area of 572 ha in the eastern sector, which has not been farmed, was re-designated in 2011, and will still be developed.

The United Nations Commission on Trade and Development (UNCTAD) published a report Trade and Environment Review 2013: Wake Up Before it is Too Late, urging transformative changes to food and agricultural systems which includes the support of small-scale farmers, and the creation of strong local food systems.

“Look, it’s not rocket science. It has been happening and is happening all around us. There are loads of small markets all over the Peninsula. What we have done is made it sexy. We use facebook, we put out a weekly newsletter, we have tours, we show people what we’re doing. We all live in neighbourhoods and what needs to happen is people need to latch onto this idea, to do something bigger than themselves. We all have to do something. Food is unaffordable. We can grow our food where we live. For us, farming is a political act. We have a vision for a more self-reliant economy in which we rely on the power of community and our own two hands, rather than entrusting our livelihood to complicated, profit-driven corporations.”

Community farming, says Ozinsky, is not just about the gardens and planting food, but also about tearing down the walls between people and re-establishing a sense of community, not only within that community, but the greater society we live in. DM