Nhleko vs Phiyega: SAPS tender fraud probes in the balance 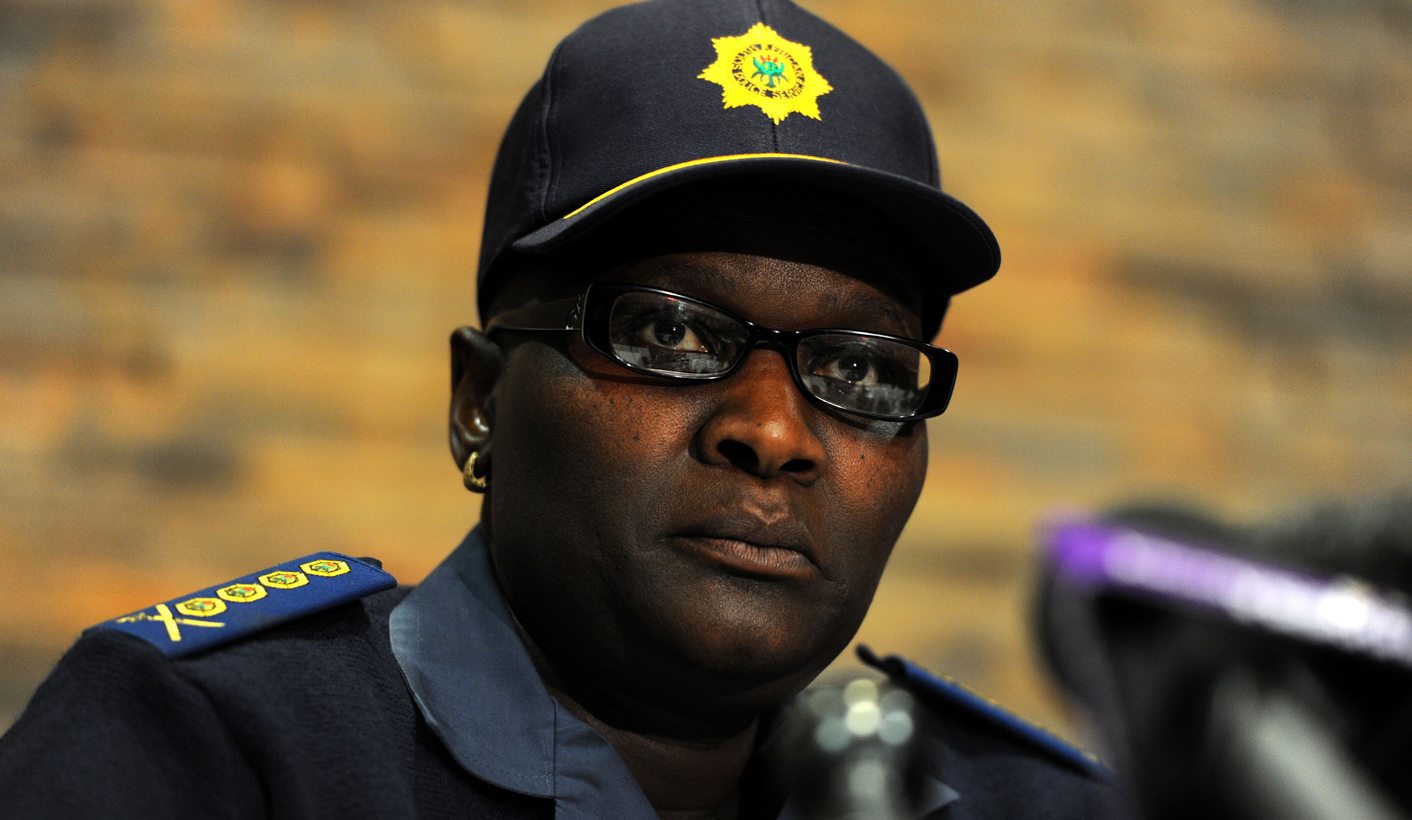 As part of her fight-back campaign, suspended National Police Commissioner Riah Phiyega is trumpeting her efforts to clean up the police service and blasting her detractors, claiming they wanted her out of the way to loot police funds. Daily Maverick has learnt that Hawks investigations into a number of police contracts worth hundreds of millions of rands could be in the balance with Phiyega’s departure. The cases relate to alleged tender fraud and irregularities in SAPS technology contracts. Despite receiving a report from Phiyega on these cases, the police minister has asked Parliament for more time to look into them. By RANJENI MUNUSAMY.

While a spectacular battle is now raging between Riah Phiyega and Police Minister Nkosinathi Nhleko, there is no clarity about the status of high profile investigations involving South African Police Service (SAPS) contracts the national police commissioner was pressing ahead with before she was suspended. These are all cases being investigated by the Hawks.

Nhleko informed the parliamentary police portfolio committee that he needed more time to look into these investigations before he could report to them. However Phiyega submitted a report to the minister in early September on these cases.

One of these cases relates to a firearms control system awarded to Waymark Infotech Technologies in 2004. The final contract price was R94.2 million but the total spent on the project rose to R400.2 million. The Hawks was investigating allegations that irregular and unauthorised expenditure occurred on the project.

Another investigation relates to a R920 million contract to supply, install and commission a radio communications system for the SAPS in the Eastern Cape. A company called Integcomm was appointed but the system is not yet functional. The Hawks and Special Investigating Unit are both investigating allegations that the appointment of the company was contrary to SAPS procurement policies and procedures, and whether there was collusion between the supplier ad police officials.

A matter awaiting prosecution is the procurement of biometric fingerprint readers for the SAPS at a cost of R54,000 per unit. Investigations found that the actual cost per unit was about R23,000. It is not clear how many units were purchased.

Another case relates to a 2008 tender for an automated property control and exhibit system that was awarded to Unisys Africa for a period of three years. The Hawks investigated whether items were purchased under this tender that did not have anything to do with computer equipment and were not described in the original open tender. The investigation also looked into former police officials who were involved in the tender negotiations and are now employed by Unisys and its subsidiaries.

When Phiyega submitted the report on the investigations to Nhleko, Hawks investigators were awaiting the final report of a team of forensic accountants to finalise their probe into another contract awarded to Pinnacle for the purchase of 1,000 computer servers. Two hundred of these servers have not yet been delivered.

These investigations could lead to a number of prosecutions for tender fraud for the lucrative contracts. Contacted for comment about what would happen to these cases now that Phiyega was suspended, Nhleko’s spokesperson Musa Zondi referred questions to the Hawks spokesperson Hangwani Mulaudzi, saying “I don’t deal with operational issues”.

Mulaudzi said Nhleko had informed the police portfolio committee that “issues of IT will be dealt with at later stage”. “The minister requested that the committee give him time to finalise that report. We cannot talk about it until it is finalised,” Mulaudzi said.

In an interview with the Sunday Times, Phiyega alleged that certain high-profile individuals were “hellbent” on undoing the tight financial controls in the SAPS for their own gain.

“Now I think there is too much control, there is no leeway to do the kind of things they want to do. Maybe the bread basket is too organised for them now. You no longer have access to the covert funds because we have processes and controls in place,” Phiyega said.

She has been spitting fire since Nhleko’s announcement on Wednesday that she had been found guilty by a ministerial reference group of gross misconduct, fraud and perjury. The reference group investigated various complaints against Phiyega and concluded that she had committed criminal and procedural offences in her role as national commissioner.

The police portfolio committee adopted a report on the same day recommending that Phiyega and other senior police managers face a board of inquiry for allegedly misleading Parliament. This relates to a board of commissioners meeting of top police management in July, which resulted in Phiyega’s subordinates issuing a media statement supporting her.

Phiyega has slammed both reports as “malicious” and “vindictive”, saying she was not given the chance to respond to any of the allegations against her. She instructed a lawyer to pursue legal recourse for what she perceives to be defamatory allegations and unlawful processes against her.

Through a PR firm, Phiyega said the reports attempted to “create a distraction for me ahead of the board of inquiry that has been instituted by the president” into the Marikana massacre. As recommended by the Farlam Commission, a board of inquiry is investigating Phiyega’s fitness for office for her role in the events at Marikana and conduct at the commission.

Phiyega told the Sunday Times that despite the multiple inquiries she is facing, she would not consider quitting her job. “Even if they offer me a farm of gold… millions… No golden handshake will let me go. I am hellbent on protecting my integrity. I will leave here with my good integrity intact,” Phiyega told the paper.

She described her relations with Nhleko as “non-existent and ultra-complex… Not sound and tentative”. Nhleko apparently refused to take a call from Phiyega last week and ignored an SMS she sent him requesting a copy of the report of his ministerial reference group.

It is clear that Phiyega has no intention of disappearing into the wilderness quietly. It is also clear that there is much more behind the epic battle between Nhleko and Phiyega than the outcome of the Marikana inquiry and other matters for which she is under investigation. With a number of other police generals also facing a board of inquiry alongside Phiyega, as recommended by the police portfolio committee, she is not alone in the battle for survival.

As this clash intensifies, the impact on operations and crime fighting remains to be seen. The instability in the police is set to continue for some time until the various boards of inquiry and investigations are concluded.

What is quite apparent from all sides is there is a significant amount of dirty laundry to be aired through these processes – and possibly outside them. It is a high-stakes battle with many people who have much to lose. DM