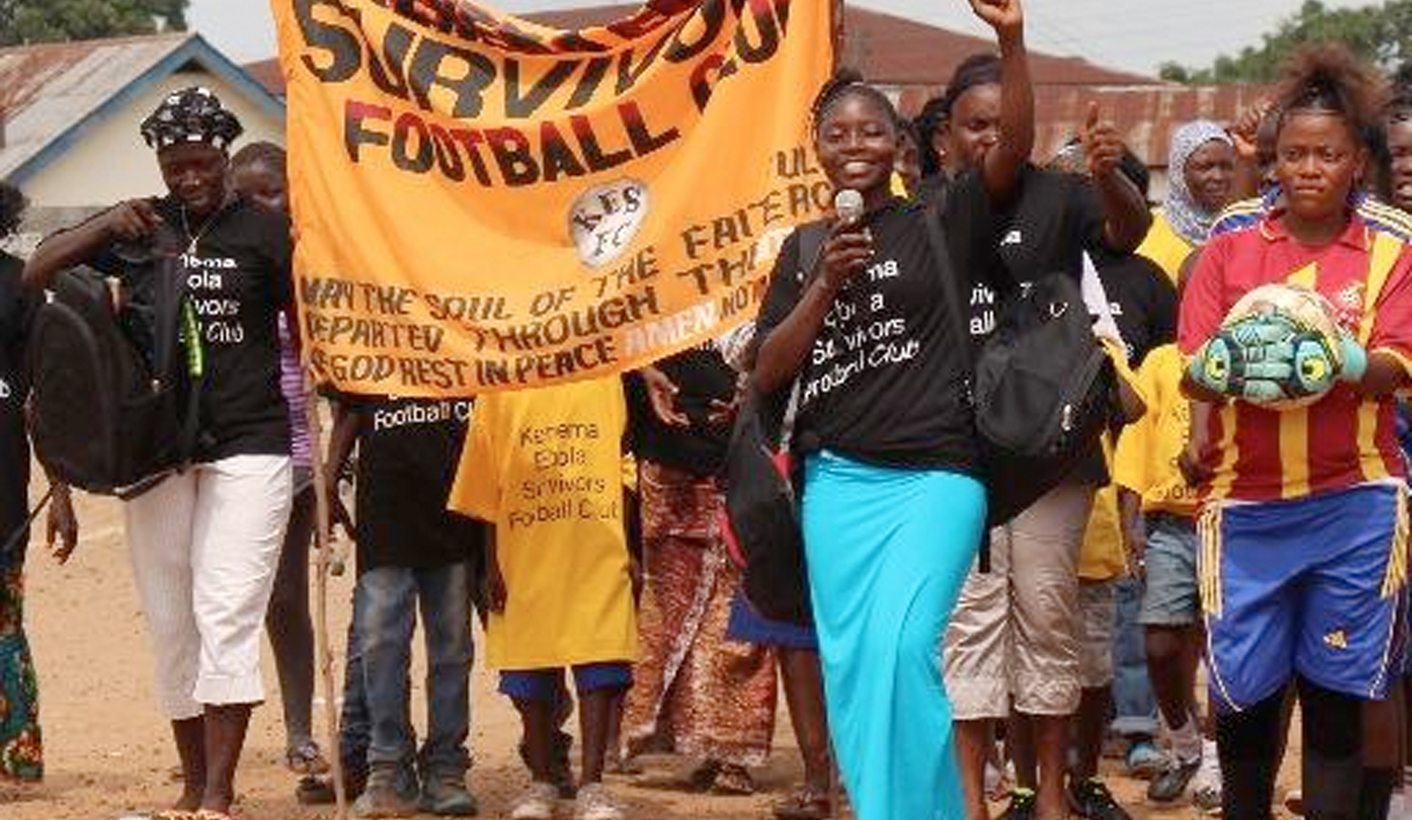 We have all heard the phrase “the power of sport”. A football club in Sierra Leone is proof that it does not need to be chest-thumping, under the guise of nation building, in order to be true. By ANTOINETTE MULLER.

It has been just over a week since Sierra Leone has been officially declared Ebola free, but just because the disease is gone, it does not mean that the fight is over. For many of the survivors, the fight has only just begun. Stigma surrounds those who overcame the disease, and many are shunned by their communities. Locals refuse to interact with known-survivors, mostly out of fear of the disease re-emerging. For many, this has had a profound impact on how they live their lives, crippling them financially.

Ericson Touray, a 24-year old who lost 38 family members, is one of those people. Before he was diagnosed with Ebola, Touray was studying to become a journalist. He had hopes and dreams of being a radio reporter, and had just enrolled in a college in Freetown. But not long after the disease, he received a call from his father saying his whole family had fallen ill. With ambulances in short supply, Touray ferried some of his family to care facilities, and soon became ill himself. He survived, but many of his family did not. Touray and his mother are the only two elders of the family who lived, and are now left caring for 15 orphaned children from the rest of his family. He drives a motorcycle taxi to try and make a few bucks, but it is hardly enough to feed the children in his care. He, like many other survivors, is shunned.

His story was first told to Pulitzer Prize-winning video journalist Ben Solomon in 2014, when Kenema became the epicentre of the devastation. Touray had already been discharged and Solomon met him on the edge of the hospital fence, shouting to his mother whom he could not come into contact with. A few months later, Solomon had hoped to catch up with Touray, but wasn’t sure if they would be able to find him, but he did and his survival story was one of wonder.
In December last year as the Ebola epidemic started to ease, Touray was determined to change all of that. Sick and tired of being cast aside, he decided to start a football club for survivors of the disease. Knowing the power that sport has to unite people, and offer a brief escape from reality, he set up Kenema Ebola Survivors Football Club — KES FC, for short.

At first, the idea was simply to give survivors something to do, a distraction from the mundane life many now had to battle with. Many survivors were out of work after they had to take time off for treatment, and playing social soccer was a welcome relief from the sadness of real life. But what started off as something small, soon blossomed into something much bigger. Membership figures started to swell, and Touray soon realised that the club could spread a positive message, and fight the stigma surrounding Ebola survivors.

It is rare for an Ebola survivor to be contagious after they have recovered. Small traces of the virus are found in the semen, and some noncontagious traces are found inside the eye, but once a patient is declared Ebola free, they pose no risk to those around them, Locals are, nonetheless, still overly cautious.

“When you walk into a store, they would say, ‘That one is a survivor. Don’t allow him to enter here,’ “It makes me feel like I have another Ebola.”

And that is exactly the kind of attitudes the club hopes to change. KES FC hopes that the regular gathering of Ebola Survivors, with other young individuals and children through play, will facilitate communication and in turn, reduce the fear and the social stigma that still lingers after the virus has been defeat.

The club is also helping survivors get back on their feet by collecting donations for school fees, and to help restart businesses. All survivors have to apply by filling in “scholarship forms” and “business forms”, to tell the club what they truly need. In May, the club became officially registered as a Community Base Organisation, under the Kenema District Council and a Non-Division Team, under the Kenema District Football Association. With the help of some aid workers, the club has a Facebook page, a Twitter account, and a website where potential donors can get in touch

In May, The club’s teams – men and women – made up entirely of Ebola survivors played their first match in front of hundreds of curious supporters. Their opposition? The health workers who treated them. The women won 2-0 while the men lost 0-5, but that is hardly the point. As the matches went along, the crowds grew, and despite there being a law restricting public gatherings, it didn’t matter. After the match, Touray and the other survivors were embraced by team members, fans and opposition. The contact, he said in an interview with the New York Times, made him feel happy.

“We come together as a group to tell others that nothing is there that they can do, that we cannot also do,” he said.

Touray’s initiative thrives because it abolishes shame. The team wear t-shirts with big, bold letters proclaiming the fact that they are survivors, while the health workers are fighters, and together they overcame a dreadful tragedy that killed more than 10, 000 people.

At the 2000 Laureus Sports Awards, former South African president Nelson Mandela said something which has since become one of the most famous quotes about sport.

“Sports have the power to change the world. It has the power to inspire, the power to unite people in a way that little else does. It speaks to youth in a language they understand. Sports can create hope, where there was once only despair. It is more powerful than governments in breaking down racial barriers. It laughs in the face of all types of discrimination. Sports is the game of lovers.”

Touray and KES are certainly proof of that. DM